Fashion Cares made its return to the convention center with the 22nd installment called "Fashion sCares". It was a costume ball and I was dying to see what people came up with.

I decided to play up the fashion angle; my costume was Grace Jones at the Q Awards this year. I had a lot of help with the mask from Danielle at Final Fashion. My makeup was done by Gail McInnes who did her research to get the look just right. I also have to thank I Miss You vintage. The woman who helped me find the perfect outfit was amazing. It's a shame that good service is rare in this city. The final product was pretty accurate I think.

We made our way down into the convention center and were greeted by the frenzy of the media wall and ice skating ghouls. The majority of the attendees didn't dress up in costume. They dressed black tie, but really didn't try to get into the spirit of the event. There were enough in costume to make it interesting though. I was a little surprised to see Mr. Fashion Cares aka Michael King not in costume. 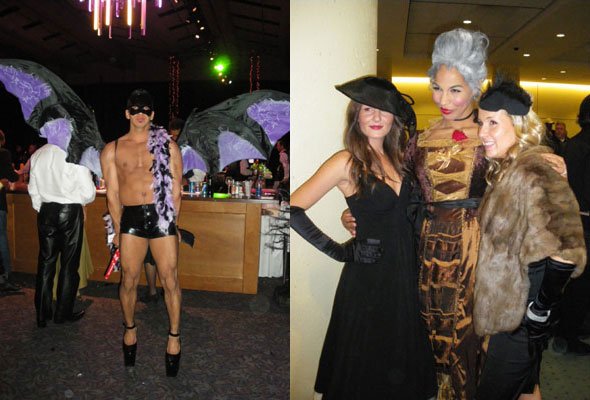 The first person I saw that I know is Shinan from The Post. "Grace", he says to me and I nod. I know Shinan keeps up on his pop culture. Many others got my costume too. I was even asked about my comeback and I did an impromptu version of Pull Up To The Bumper complete with dancing. I was having a blast being Grace but I don't have her hardness or edge. 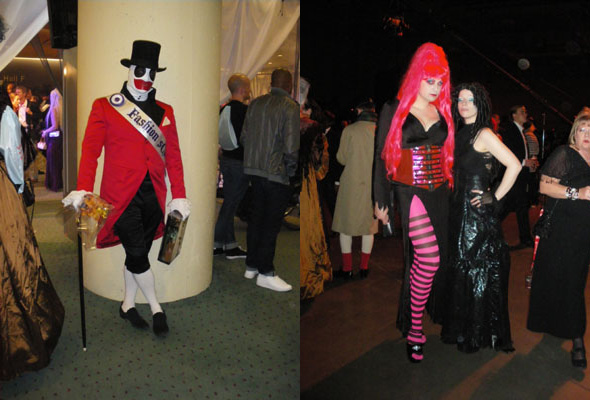 The show was a big budget production including pyrotechics and smoke machines, but the setup of the room didn't translate the energy of the performers to the audience. I wasn't very close to the stage and the best way to view the stage was on the monitors. It didn't help that there was a massive beam blocking the end of the stage. 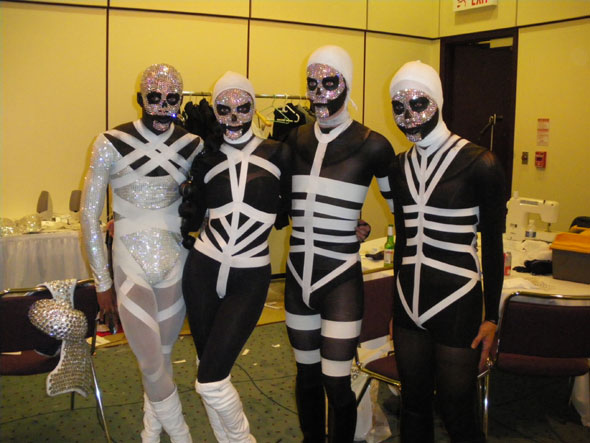 Hometown faves Fritz and the Phantoms opened. I had been hearing about their costumes all week, and the anticipation was killing me. They took to the stage with their team of dancers. It was part Gareth Pugh, part Kananga from Live and Let Die and part Leeloo from the 5th element. They were covered in Swarovski crystals and shone like the stars they are. Fritz's head was completely covered. For some reason, the organizers stuck the costume contest in the middle of their set which really took away the energy from their performance. 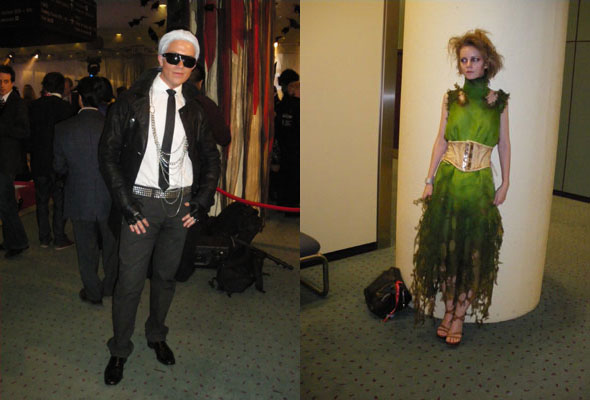 I got up to go to the washroom and I ended up backstage taking more shots of Fritz Helder costumes. I missed Katy Perry's and Kreesha Turner's performances. The dance and fashion numbers where lovely and elegant and kept to the Hitchcockian theme perfectly. 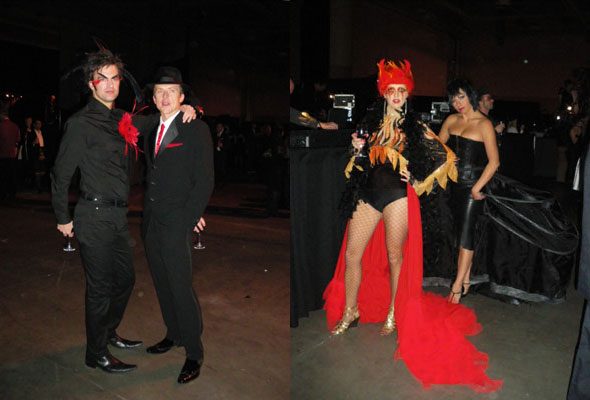 The winner of the night was Dame Shirley Bassey. What a vision in yellow feathers. She sent the audience into a frenzy when she began with Goldfinger with her full band. She looks amazing for a 71 year old and that voice. She got the crowd standing and dancing. She finished off with Big Spender, twice. It was fantastic. 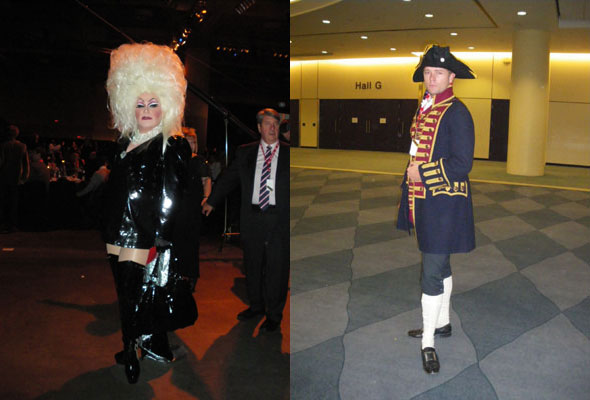 It was my first Fashion Cares so I can't compare it to the others. I've heard some interesting comments from previous attendees who said it didn't live up to expectations. I had a blast regardless.

Here are some more pictures of some of my favourite outfits from the night. 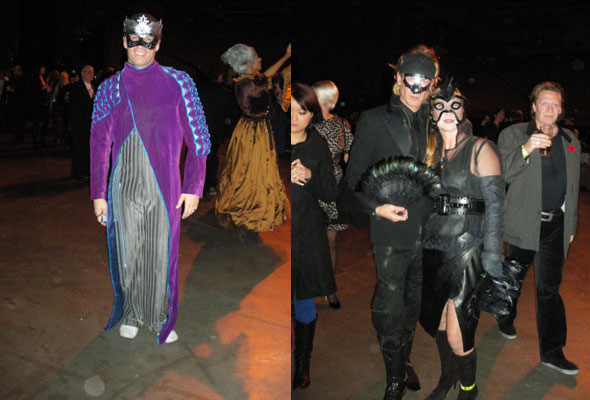 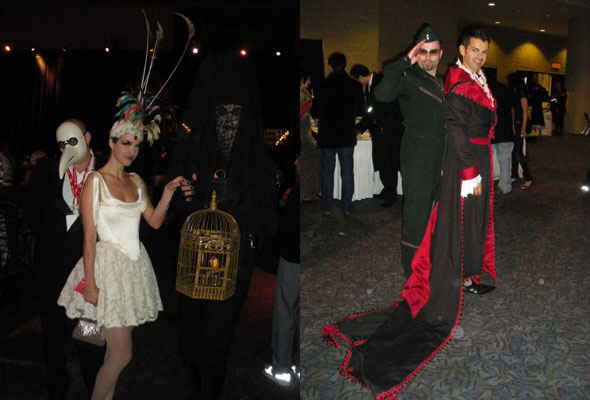 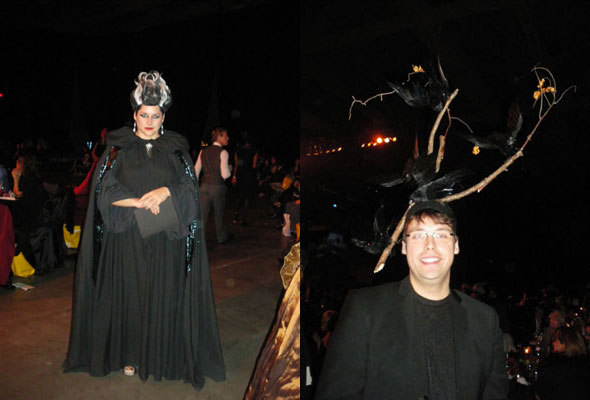 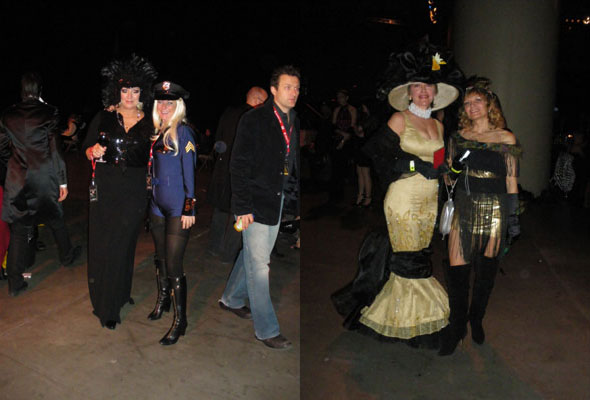 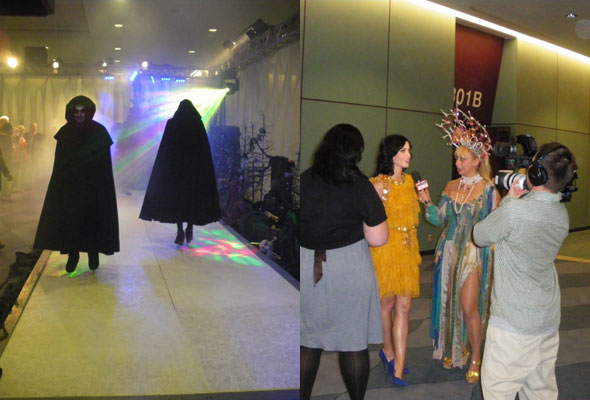 Slideshow off all images I took:

Edit: Nov 5, 2008. Michael King emailed me and gave me the scoop on why he wasn't in costume. In the frenzy backstage, his Military costume from Berman and Co. was misplaced. When it came time to change, it was gone; swept away with gear for the third act.

I really appreciated Michael taking the time to email me. Thank you.
P.S. I hope you don't mind my Mr. Fashion Cares nickname, it's all love. :)