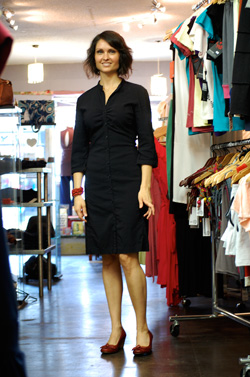 What neighbourhood are you from? Jarvis and Isabella

What do you 'do'? I own an eco-ethical clothing store on Yonge Street called, Green Is Black.

How long have you been in Toronto? 3 years

In high school, I made all of my clothing out of reclaimed material and also did some modeling. Post-secondary wise, I went into social services in non-profit and I just decided to make the switch to for profit. I felt like I could give people the choices that I thought were available and the ability to vote with their dollar for what they believe in. The store is a good combination of my interests.

Sometimes, I might not go out if I have a really great book. I might say I'm not up for it.