For five seasons now I have watched Zoran Dobric's shows. It is fascinating to see a designer's vision mature.

Dobric was my creative design professor in fashion school. He delighted us by showing his process of gathering inspiration for design. This included exploration of craft processes like screen printing, crushing, pleating, embroidery and applique. He also introduced us to the work of the European avant garde designers he admires. These abundant scrapbooks of torn magazines and experimental swatches of cloth are the essence of Dobric's design identity.

Each collection Dobric has shown in Toronto has defined his unique point of view. The early ones were a long, slow, serious procession of one-off garments that Dobric produced in whatever time he had left between a full time design job and a part-time professorship. As students, we were all struck by his commitment to doing it all. Dobric's clothes were never simple, and were often the product of several processes personally executed by the designer's dedicated hands.

As Dobric told Jeanne Beker in the interview after his show on Tuesday, he would rather design than sleep. With that determination, Dobric's star is certain to rise. 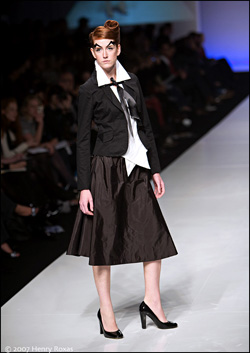 Dobric's Spring 2008 collection represents a new chapter in the designer's career. Now committed to designing his own label full-time, Dobric is aiming towards a wholesale collection instead of the individually crafted, limited edition garments that he is known for. While the gothic-woodcut looking linear printing , crushed and manipulated textures, and cutting edge aesthetic is still there, the design elements have now been selected to be reproducable at a greater volume.

This sense of a designer growing his business is apparent in other ways too - instead of Dobric's usual limited and somber palette, the designer surprised me by injecting the collection with saturated blues and bright purples. Dobric has included some more classic pieces that are versatile and translate the more unusual pieces into wearable ideas.

After the show, Jeanne Beker led Dobric and some models through the crowd to the miniature television studio located at the front of the tent. As I watched Dobric answer Beker's questions with characteristic humour and humility, I felt immense pride that this designer's persistence and effort is now being recognized and applauded by the fashion establishment in this city.