"Those shoes are great, Philip. Who's the designer?"

I'm talking to Philip Sparks. We're at Bar One celebrating Andrew's birthday. It's August of this year.

"I designed them", he replied.

"Nope. I'm coming out with a shoe line. It's a little hush hush right now so that's all I can say at the moment", he replied.

So, I've been sitting on his shoe gossip for months and it's finally come together at L'Oreal Fashion Week. Philip's mysterious shoe partner is Town Shoes and he presented his spring 2008 collection at the newly renovated flagship store on Bloor Street in Yorkville. 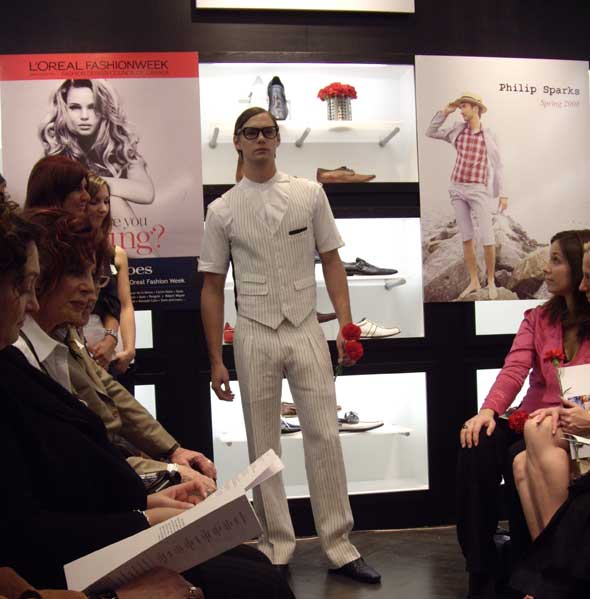 This time I was surrounded by shoe and handbags inspired by luxury designers instead of the real thing. The new store has two levels. Street level is women's and the second floor is a large men's section. Something you don't see every day. The reception was on the ground floor while the runway was upstairs. I wasn't sure how they were going to pull off a runway up there. They cleared it of all obstacles and created a small runway lined by rows of chairs. The show was very intimate - just like his fall 2007 collection and carried the same positive energy. Before the show, a representative from Town Shoes spoke about the collaboration with Philip Sparks. It's the beginning of the retailer's move into designer collaborations. Expect more to come in the future.

The Philip Sparks man for spring 2008 is someone who spends his days on or by the water. The colour palette of red, creme, white, grey, indigo and black reflected this nautical influence. The Philip Sparks modern deck shoes presented in blue, white and tan played wonderfully into the theme. 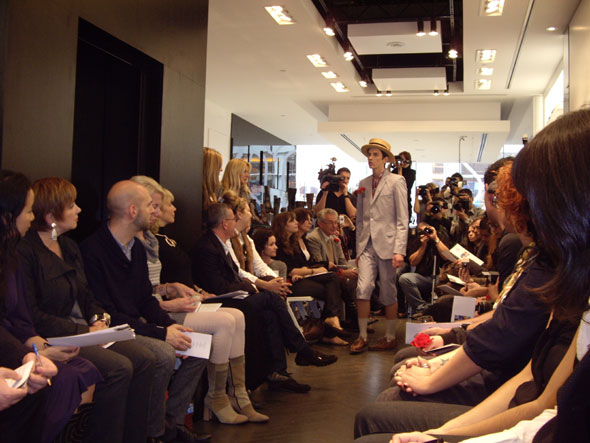 Shorts in creme striped linen and blue striped cotton were a big part of the collection. Red plaid, white or blue dress shirts with long or short sleeves combined with shorts or indigo linen denim gave off a relaxed feel without losing the influence of bespoke techniques. A Philip Sparks collection wouldn't be complete without suits and he used creme striped linen to create a seaworthy look.

Some of the most surprising aspects of the show were the blue polyethylene trench coat and windbreaker. I loved them. Most people were trying to wrap their head around how he could sew the unusual and hard-to-work-with fabric.

I have to call out the fabulous styling of Pascal Chiarello from Judy Inc. He paired some of the looks with those nylon plaid shopping bags that are a staple of Chinatown. I wondered if he was spoofing Marc Jacobs who knocked off the design and created a luxury version of the bag for Louis Vuitton for spring 2007. The guys looked so perfect they almost seemed robotic like Gigolo Joe in AI. That didn't bother me much. I can stare at Jude Law clones all day. 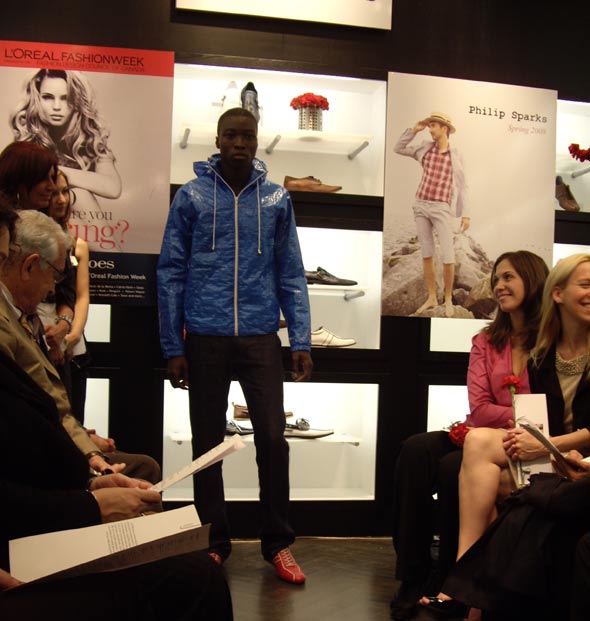