Plastik Wrap is the kind of store I love to explore, full of slightly off-the-wall clothes that err on the side of goth, various fabrics augmented with PVC and ready for wearing to the nearest alternative club night. After chatting with designers and store owners Adriana Fulop and Ryan Webber, however, I found that the beauty of Plastik Wrap lies in their refusal to be categorized and their ability to create clothes that can take their wearer from club to office and back again without a hitch.

They had just returned from Anime North and the store was full of boxes to be unpacked, but they were able to take a moment and give me a sense of the Plastik Wrap aesthetic, one that relies on a simple philosophy: if it's useful in their lives, then it's probably going to appeal to other people too. 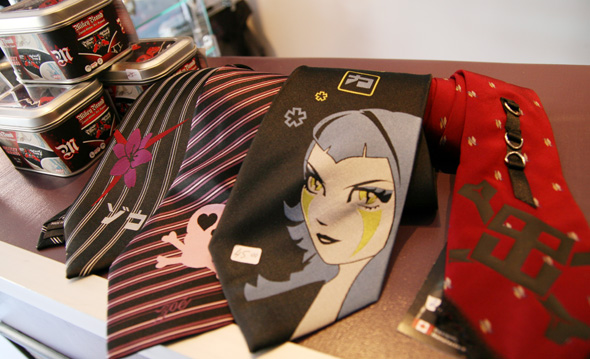 Both Fulop and Webber live in their designs, wearing the clothes they create, "probably 90% of the time." Funnily enough, on the day I was there Fulop admitted she wasn't wearing Plastik Wrap - I believe them anyway though.

The pair are all about finding a personal connection with their clothes, an attitude I certainly subscribe to - when Webber gives me the example of coming up with a new design for pants after going on a bike ride, I think to all the times I've had to bike through the streets with my pants rolled up in an ungainly manner and am tempted to ask him which pair is the one meant for bikers.

Their inspiration also comes from other aspects of their life, Fulop citing, "music, architecture and movies," as elements of the design process. The store itself has seen this kind of design osmosis, as Webber points out the heavy metal chandelier, one of the most definitely gothic elements of the store, then tells me it's the fulcrum of the store's interior design. The crenellated light fixture's shape is mirrored in shelving units and repeated throughout the store, giving it a unified feel. 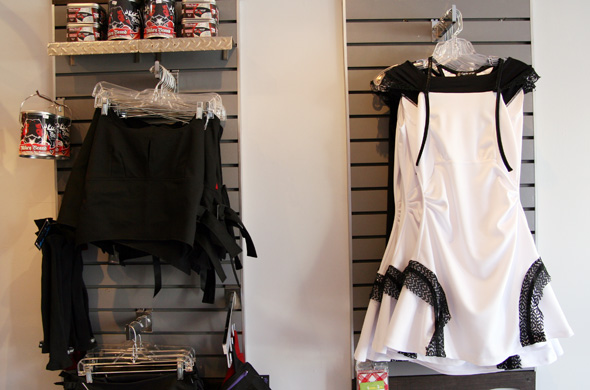 The merchandise itself is varied, which is not surprising when considering the breadth of inspiration Fulop and Webber are working with. Modernized corsets hang beside trousers that manage to retain the slightly alternative feel that pervades the store while being suitable for any work environment. This is one of the attractions of Plastik Wrap - it places pieces that are stunning in their weird beauty alongside pieces that border on classic but hold onto a certain quirky aesthetic.

All the clothing in the store is by Plastik Wrap, with accessories from various other designers - jewelry from Montreal by Anemone and Missy Industries and anime-inspired bags and wallets by Ukio, a Swiss designer. 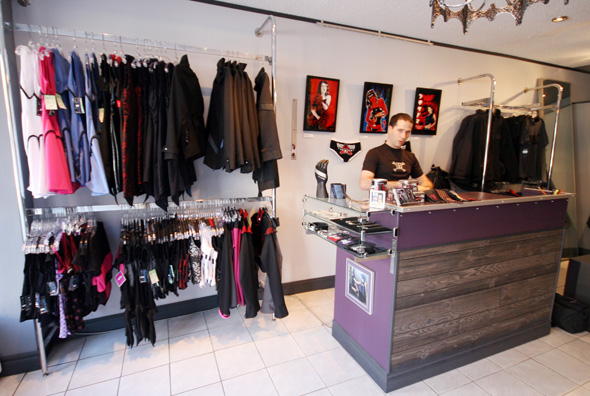 Webber also gave me a tour of the small space, showing me the store's artistic reach, which goes beyond design and includes a rotating art display that features the work of local artists and a rear-projection screen that displays footage from fashion shows and clubs.

Though I'm firmly stuck in a hipster rut right now, Plastik Wrap's designs appeal to me. I might not be able to pull off wearing the styles they sell, but the sheer artistry of their beautifully structured yet utilitarian pieces and the design philosophy behind them still fascinate me. 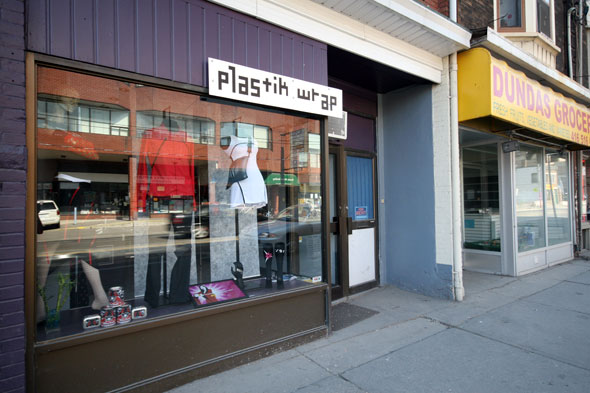