Indochino has brought its online custom-suiting system to a two-floor space on King East. The showroom, which began life as a pop-up last year, brings the online retailer and its budget-friendly, made-to-measure suiting into a real-world setting.

Update: This article was written when Indochino opened its first Toronto location at King and Spadina. They have since relocated to 143 King St. East.

For the uninitiated: The Vancouver company launched in 2007, becoming the first firm to make shopping for custom suits a dead-simple online transaction. Pick your fabric, choose your details (one or two buttons; peak, notched or shawl collar; angled or straight pockets; flaps or no flaps), and plug in your measurements. Four weeks (and as little as $500) later, a suit made to your exact specs shows up on your doorstep. 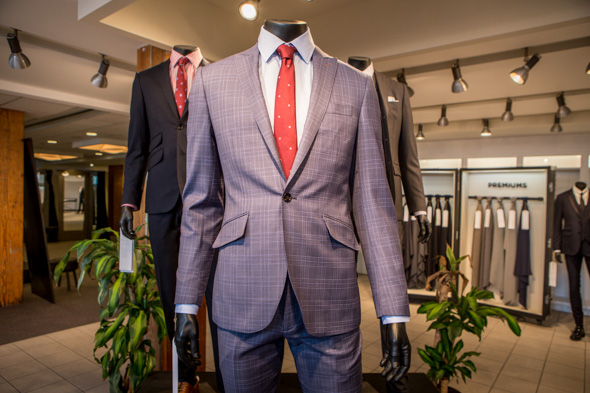 The company expanded into pop-ups two and a half years ago, setting up shop in North American cities with large Indochino customer bases. Soon, they made the decision to keep the stores permanent; as it turns out, there's room in Indochino's business model for both wham-bam online shoppers and showroom visitors. 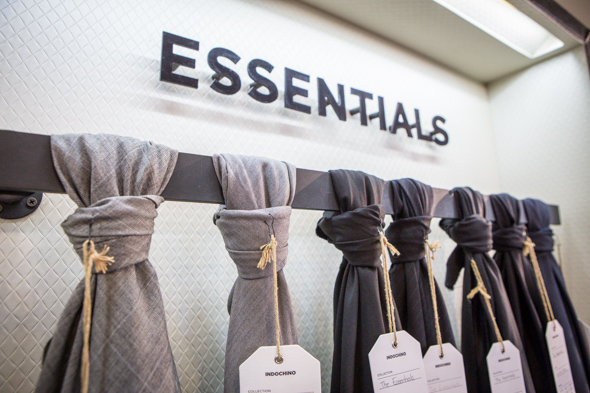 As manager Janette Brathwaite explains: "There are people who love shopping online and they only want to be online customers, whether that's just a convenience thing or they're just techy by nature. And then there are people who are like me who are very tactile - I love to see things in person, and I think that I would always want some kind of in-store space.

"Then, there are the guys who just want the help - how to find a tailor, how do I know if the pants really are right? They want the extra bit of support - that way, they can feel 100% confident shopping online." 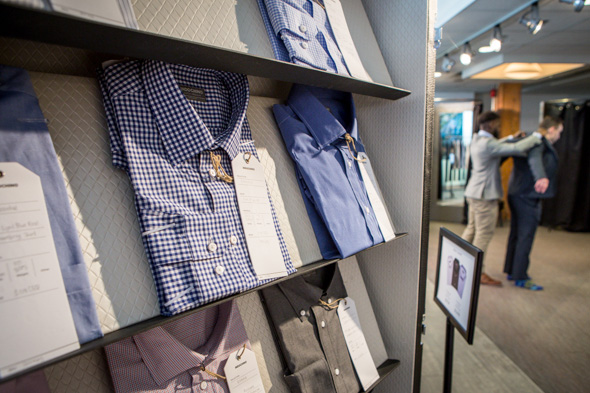 The showoom is decked out with fabric swatches, from basic wools in a variety of solid hues to windowpanes, pinstripes, micro-houndstooths and glen plaids.

Each fabric has a price attached for two-piece suits, three-piece suits, or separates - with one recent exception, a white embossed paisley that was only available in jacket form. ("We made that decision for you," she laughs. "We made sure you wouldn't have matching pants.") 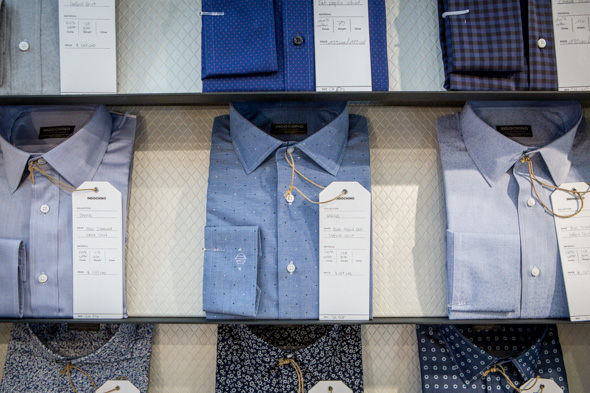 Fabrics start at $489; their most expensive option is a three-piece, rendered in a buttery-soft, limited-edition sharkskin, for $1089. New fabric options, Brathwaite says, come in every three weeks or so (often in well advance of them hitting the website). 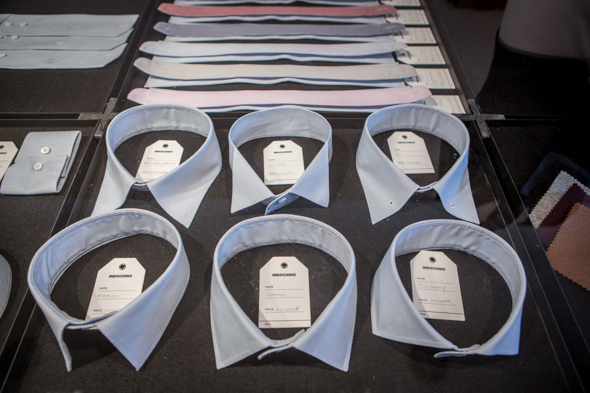 At a fitting, visitors chat with showroom stylists and get advice on what fabrics, cuts and details might work best for them. Next, they take the 14 body measurements that guide the production of each suit - a draw for those who might be intimidated about measuring themselves at home. 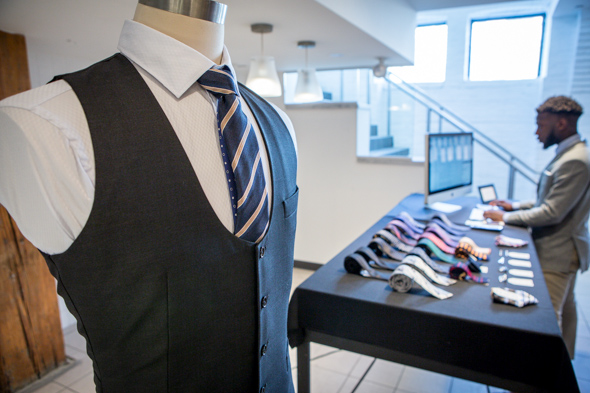 The in-person service, Brathwaite says, is a boon for shoppers who might be unsure of what they want, or could use a shove in an interesting new direction; though a shopper might come in thinking they want a black, peak-lapel suit, they could walk out of there having gone with charcoal grey with a slim-notch collar.

"Not only would they say 'this is an option', but 'here's how you can work that option'. Guys might never have thought to change the shape of their pants, or make their jacket a little bit slimmer, or narrow their wrist or their bicep just because it looks that much better." 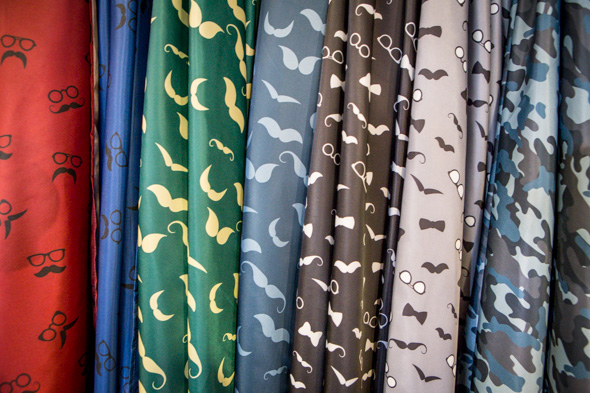 After the fit gets squared away, the customization starts - there's a slew of available options, from monograms and buttonhole stitching to whimsical lining fabrics (many of which are unique to Indochino).

If there's an option you want that you don't see on the menu - say, orange buttonhole stitching - Brathwaite says they'll be more than happy to call up their production facility in Shanghai and find out. 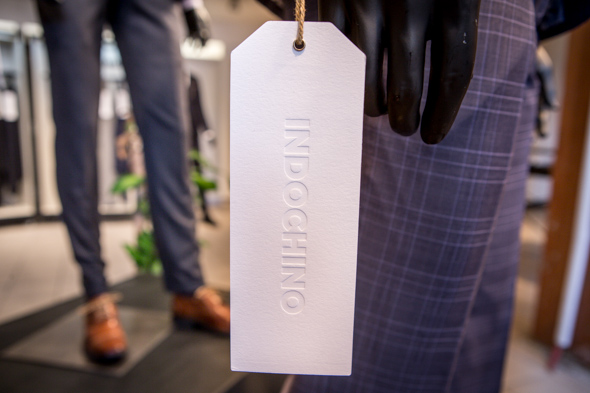 A second fitting follows to make tweaks; after that, the company will reimburse shoppers for $75 in tailoring to make final adjustments. They'll also remake a garment from scratch if the problems can't be fixed after the fact, and if someone's really unhappy, they'll refund them their cash. 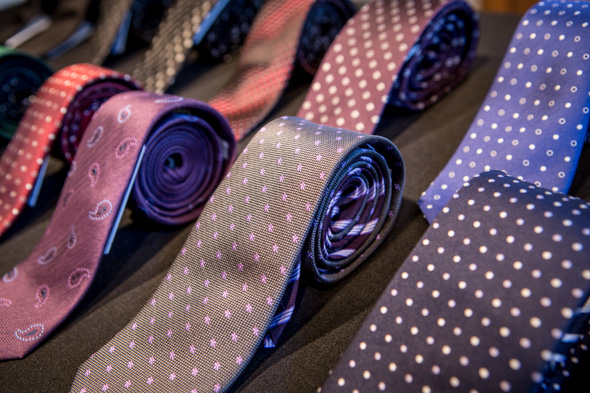 Brathwaite says the Toronto guy tends to favour a slim fit and doesn't shy away from colour or pattern - the company's pricing lets them take a flyer on trendier fabrics and styles. (By the way, Indochino caters to women, too - with the understanding that they'll be getting a masculine "boyfriend" fit tailored to their measurements.) 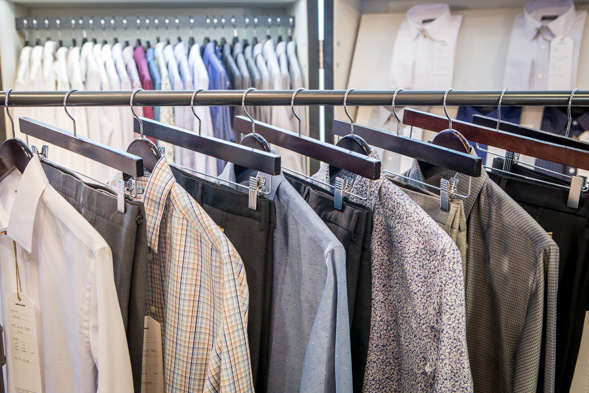 The beauty of Indochino, she says, is that they can make suit-wearers of all kinds happy. "You've got your fancy guys who want to have a silk-blended suit. Then you've got your first-year university interview, basic suit guy who wants the entry level price point - keep it wool, keep it simple. We've got him as well. We have everyone in between." 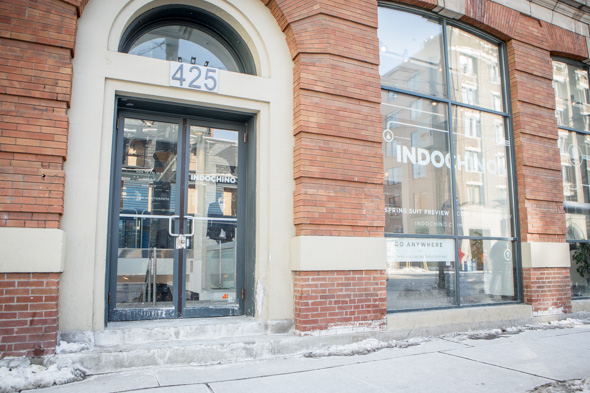