Hero Heroine, in some ways, is exactly what you'd expect a high-end salon to look like: An ultra-modern, all-white space, with everything new and gleaming. But the mood in the sprawling three-floor salon, located just south of Dundas on Ossington, is spectacularly relaxed.

"We wanted to create a nice feel where everybody feels good, there's no pretentiousness," Anthony Filipetto, one of the co-owners, tells me while giving me the grand tour. "That was the No. 1 thing. I feel like you can be luxurious, without being pretentious, but still have an edginess to it." 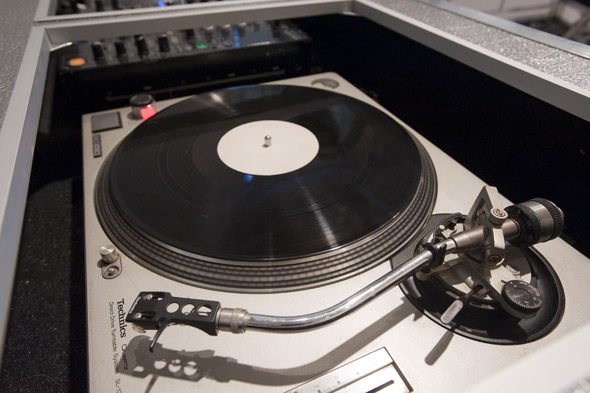 That mood is reflected in the DJ booth on the cutting floor and the PlayStation in the men's area (and probably amplified by the fact that it's quitting time on a Friday). But after meeting Filipetto and Nico Liberio, who met in haircutting school decades ago and have been buddies and business partners ever since, I get the sense things are this chill all the time.

"We've been partners for 20 years. A lot of the time, we don't even have to talk," Liberio says. "It's just that look: 'Go eat something. I can tell you're pissed off.'" 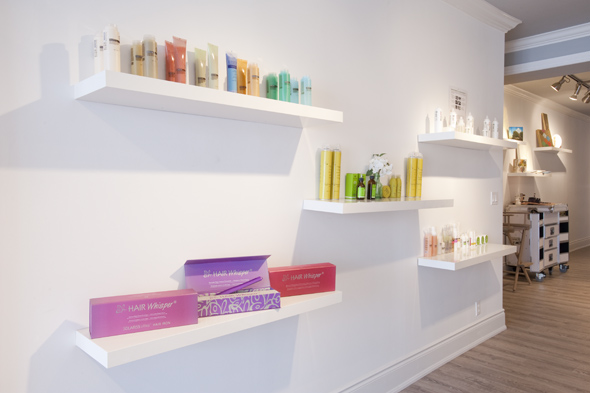 The duo first set out in 1994 with a salon at Queen and John - prime Electric Circus territory. "When the rave scene was on back then, we were the guys doing all the crazy hair," Filipetto says. "You were doing more leopard print than you were doing bobs, know what I mean? Which I loved, because you could go in every day and be as creative as you want, and it wasn't like 'I'm doing another layered haircut'." 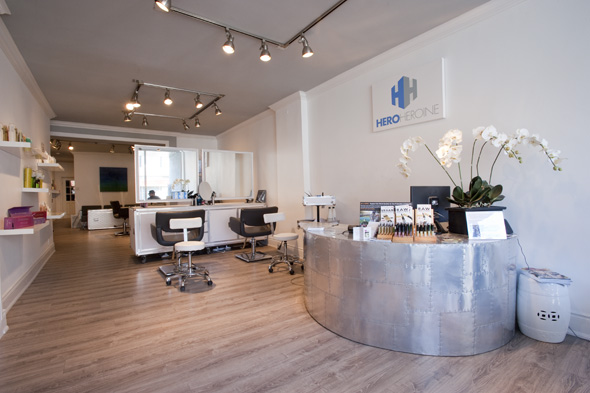 Eventually Filipetto left for L.A. to do hair for movies and TV, then opened a boutique hotel in Costa Rica. Liberio began a line of hair products, called Hair Hero, which eventually sparked the idea for the salon's name. The duo still keeps up the film work; Filipetto mentions he had Henry Rollins in earlier in the week to style his hair for an upcoming movie role. 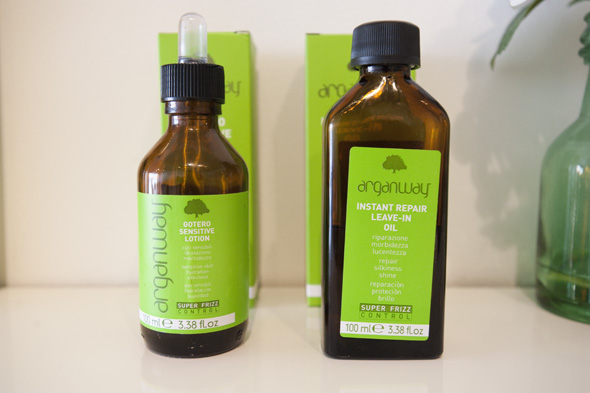 They took possession of the building in January, finally opening about five months ago after an exhaustive reno. The space previously hosted the Cantadora holistic healing centre on the second floor, with apartments on the third floor and basement. "They were selling crack out of the basement. Literally," Filipetto says. "When we were reno-ing it, it was like 'No, no more crack available...onward, onward!'" The back alley, meanwhile, was a sales floor for stolen bikes.

"The neighbours were really happy to see us," Liberio adds. 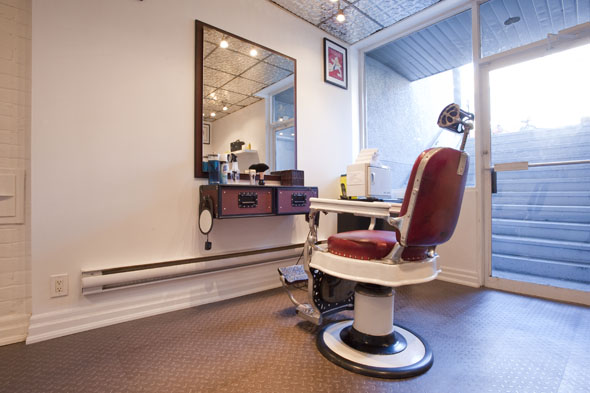 In the basement, there's now a men's area with barber chairs - and a chill-out area that includes a few lad mags and a pinball machine. The second level hosts the cutting floor, a makeup/styling area, shampoo chairs, and the aforementioned DJ console, which is set inside a coffee table. ("What's a salon without a DJ area? I know I couldn't work," Filipetto cracks.) Hidden away upstairs is the colour area, complete with an impressive-looking "colour bar" and wall-spanning shelf full of supplies, as well as another wash station. 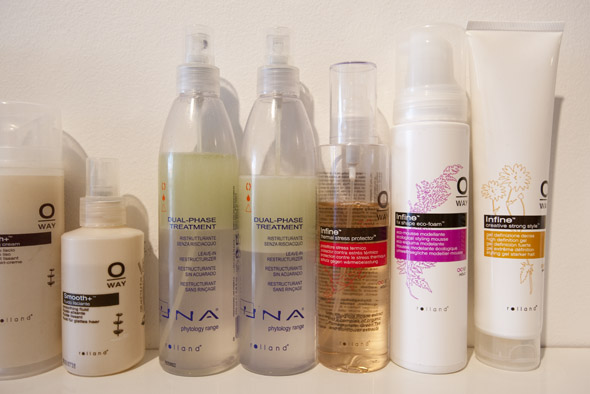 The shop's furniture is custom-made out of flight case materials for that rock-and-roller/DJ on the go look - and it's all mounted on wheels, which comes in handy whenever the duo decides to throw a bash inside the salon (which is often).

As in their Queen and John days, wilder cuts and colours seem to be a salon staple. (At one point, Liberio doffs his hat to show off his green "camo" dye job.) The duo also handles a lot of colour corrections, as well as taking their clients through dramatic look changes. "I seem to be taking girls from this" - Liberio indicates waist-length hair - "to that" - he points at my pixie cut. 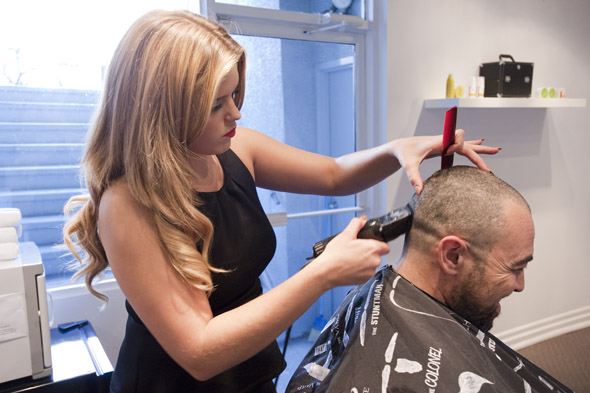 Aside from themselves, there's a small team of stylists : Amara, who Liberio describes as a whiz with different textures of hair; Sinni, who at 22 is" "one of the most talented men's grooming specialists I've seen come along in a long time"; and Ken, who has a "really old-school, trained, precision-haircutting, Vidal Sassoon style," Liberio says. "He's got a good 10 or 15 years on Anthony and me, and we have 20 years' experience." (Deadpans Filipetto: " I've never cut hair in my life.") A makeup artist is also in the salon on occasion, Filipetto says, but her gig as Eminem's personal groomer keeps her on the road much of the time. 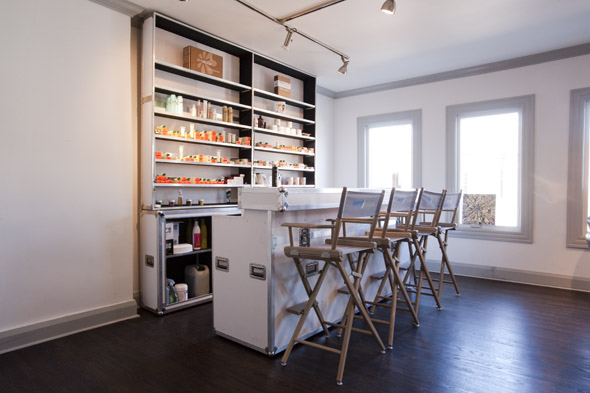 All the stylists set their own prices and hours, Liberio says. A wash/cut/style for women ranges from $65 up to $125, while men range from $32 to $85. Liberio adds the shop is introducing a new men's service: "Sinni charges $45, but she includes a hand massage, and a mini facial for men with a hot towel service." Colour is $55 and up.

There's more in the works: The duo plans to find an RMT to work out of the salon, and potentially a tattoo artist, while still continuing their movie and film work.

"Let's see what happens in the next 20 years, you know?" Filipetto says. "Let's play and have fun and do what we do." 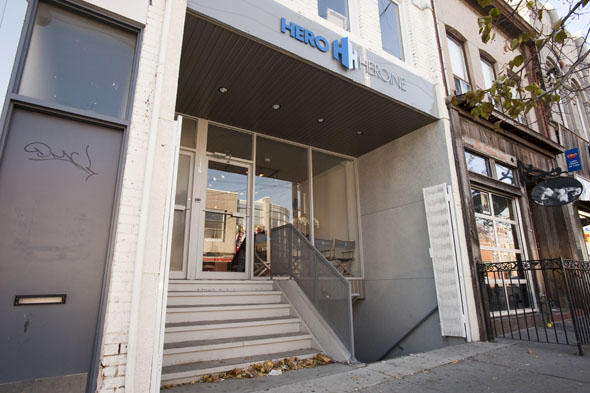