Contraband has been open for just a few days, but you'd never know it from the already pristine, everything-in-its-place interior. The stock is not yet fully rounded out--you can blame Hurricane Sandy for that--as Contraband's slated footwear was held up in New York. The Yorkville menswear shop's draws from the location's former tenant (a pharmacy), as much as from Yorkville's own unlikely history as the hub of Canadian hippiedom. 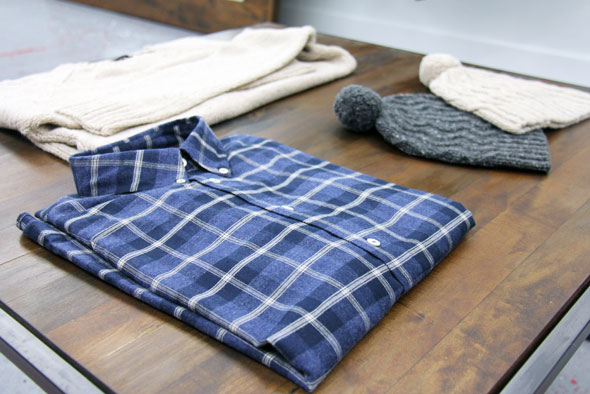 I chat with co-owner Christopher Casuga and brand manager Bernard Manarin about their vision for the store, and learn that they each have 15 years of retail experience under their belts (including most recently at Holt Renfrew)--Casuga has lent his consulting and buying flair extensively in Asia and worked with fashion conglomerate I.T, while Manarin is trained in visual marketing and merchandising, and has his own brand, NTHNG . 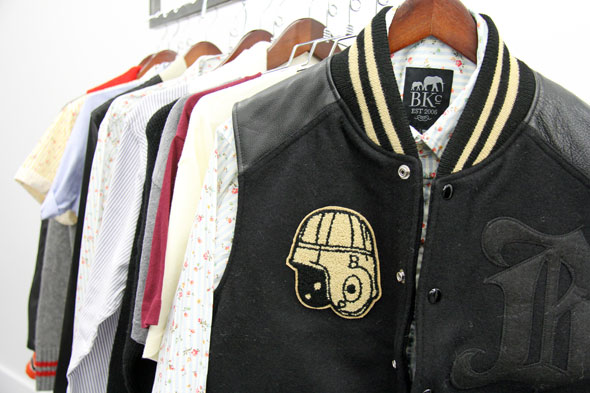 Part of the store's appeal lies in its juxtaposition of brands such as vintage sportswear-inspired Brooklyn Circus , alongside Thom Browne , or even Nike . "We're mixing designer, luxury brands with entry-level brands," Manarin tells me, and he sees this mix of high and low fashion as indicative of the state of street style today. It's a true-to-trend forecast, with thrift and thrift-inspired looks or casual sneakers increasingly working their way into the closets of well-dressed, affluent men. 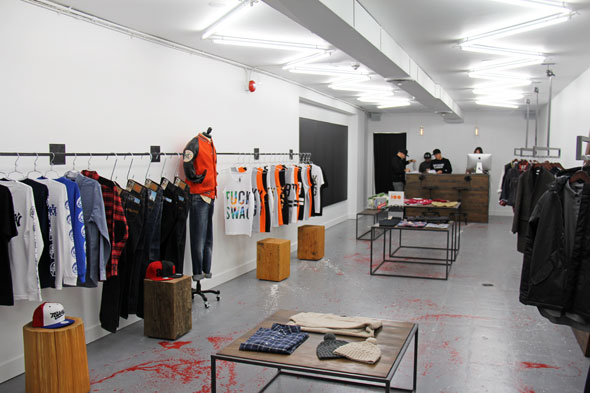 The interior is stark and brightly-lit, thanks to the snaking fluorescent lights above, resulting in a set-up that lets its stock breathe--you can easily rifle through A.P.C jackets, and the shop's small selection of caps is displayed on stumps of reclaimed wood that's been submerged underwater for 30 years. The polished concrete floor adds to the cavernous industrial atmosphere, thanks to its haphazard splotches of paint.

One of the shop's most interesting features is located near the entrance. "You see a lot of men waiting for women, but what I've been noticing is a lot of women are now waiting for us men," Casuga says. 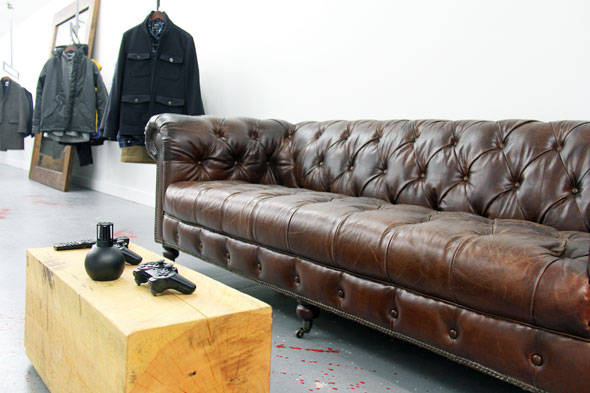 To that end, a lush brown custom-made leather couch faces a table sporting two XBox controllers and a flat-screen TV. On a Thursday evening, Tropic Thunder provides the shop's only soundtrack, while earlier in the day, Monsters Inc. graced the screen. It seems the folks at Contraband have finally succeeded in making shopping with your fashion-conscious boyfriend fun. "Yorkville is one of the places in Toronto where people are spending the most time and the most money," Casuga tells me, and the barebones media center by the shop's entrance is a clever way to facilitate both. 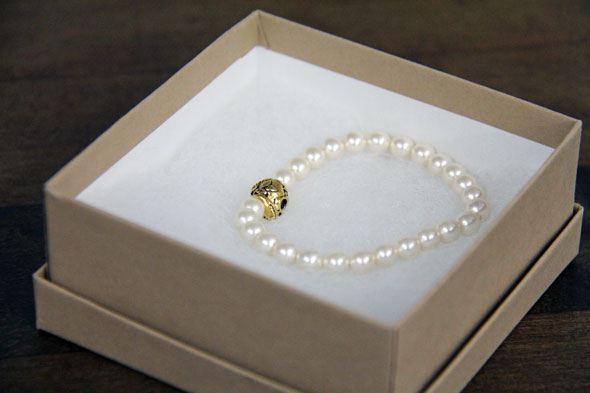 Their stock caters almost exclusively to men, although they do carry Extension's hand-made, beaded bracelets, some of which are unisex, and some (such as the Swarovski crystal, or Swarovski pearls for $40) were certainly bought with women in mind. Other pieces, such as their loose-fitting tanks, knitwear, or even flannel shirts, have already appealed to female shoppers. "It's like shopping in your boyfriend's closet," Manarin says. 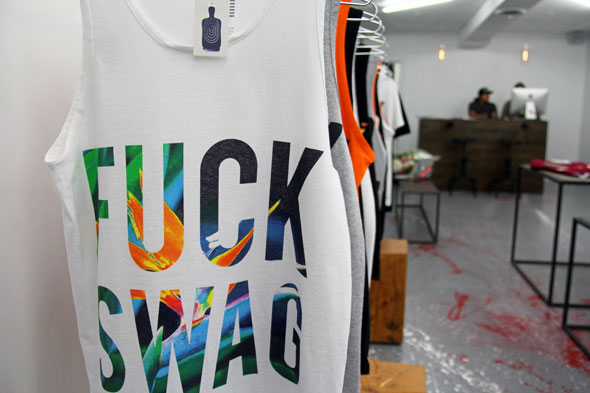 "It's a hard market for women out there," Casuga adds, so they'd prefer to bring in the occasional feminine accents--such as hats or eyeglass frames--to complement their stock. It's a wise move in a neighbourhood seemingly saturated with luxury women's retailers. 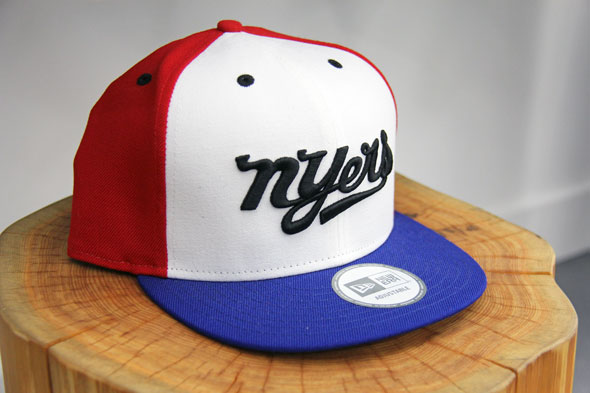 Spread around the whitewashed space, you'll find New York's am aftermidnight, Black Scale 's polished yet quirky streetwear, Filipa K , Nudie , sunglasses from Super , Reebok Classics and Oak (another New York brand). The emphasis here is on European heritage fashions, rather than the Canadiana championed by local brands such as Wing + Horns . 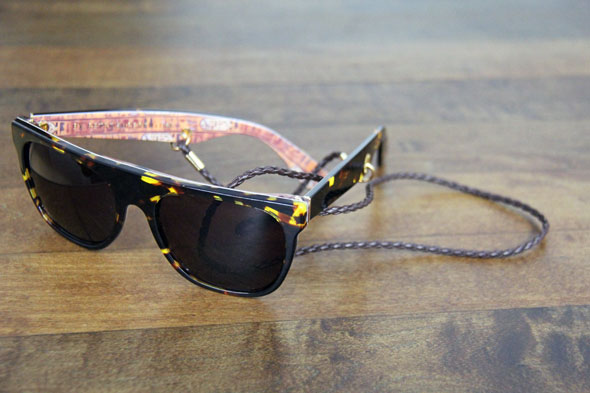 In the very near future, you can expect to see brands like Raf Simons , Comme des Garcons , the high-end looks of Richard Chai (Contraband will be the exclusive Canada stockist), and T-shirts from City of Mary . The store's direction is set to go into higher-end clothing, although the exact roster of slated brands is being kept under wraps--however, expect fashion houses such as Balmain . They're also planning a buying trip to Japan, which is sure to inject several avant-garde brands into the store's stock. 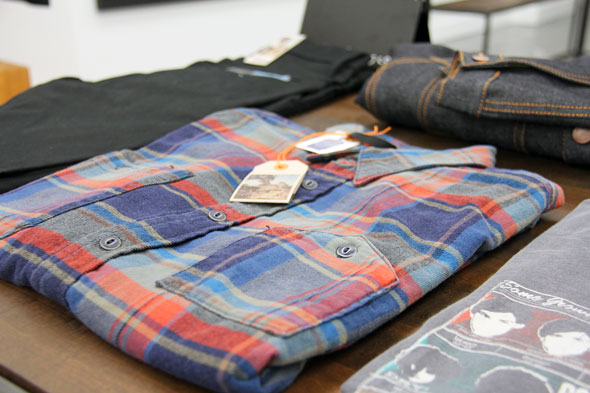 Their footwear section will include Alexander McQueen by Puma, Nike, Reebok, and Alejandro Ingelmo (expect to fork up around $1200 for his sneakers), and a small selection of bags ($175-$475). Currently, the price point in the store as a whole ranges from around $45, to $965 for an A.P.C jacket, but as of January, the store's prices will top out around $4,000. 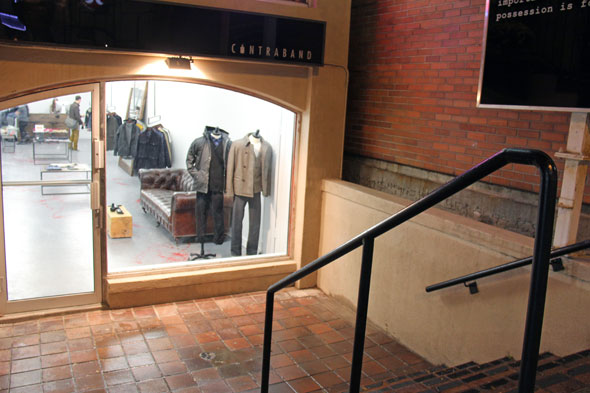 "Contraband is a place where we can basically just be ourselves," Casuga tells me, and sunk deep into the plush sofa, I can see how that could pay off nicely for this Yorkville newcomer.

The Best Streetwear Shops in Toronto