New Chinese restaurants in Toronto contributed to the bastion of neighbourhood stalwarts and institutions that have defined Chinese cuisine in the city.

There's no shortage of choice between traditional or contemporary interpretations of classic dishes that range from roast meats to casual Hong Kong-style diner fare, and even small plates sided by inspired cocktails.

Here are some new Chinese restaurants in Toronto you need to try.

Since 1981, Won Kee has been dedicated to the craft of Cantonese barbecue that uses traditional charcoal stoves. While the barbecue restaurant is from Guangzhou China, it opened its second store – and first international outpost – on North York's Northtown Way.

The brand specializes in roasted meats and poultry that don't only sport a lacquered exterior that shields tender flesh but is also drool-worthy aromatic. The signature roast goose, for example, is rich and fragrant, with juicy meat that's fatty but not greasy hiding under crispy and bright skin.

Besides the uncommon yet traditional specialty – most restaurants in the city serve only duck, the restaurant also offers breaks from tradition to offer fusion options including a BBQ pork burger and a premium soy sauce chicken burrito.

Head to Scarborough to satisfy those Cha Chaan Teng cravings at this new 80s retro-style space near McNicoll Ave and Markham Rd.

Fill up on Hong Kong-style combos featuring dishes like baked pork chop in tomato sauce on rice or stir-fried rice noodle with beef (aka beef ho fun), or graze on the vast selection of dim sum, street snacks, plus butter-stuffed pineapple bun.

The dim and buzzing room is styled after an old-school Hong Kong-style café with a vibe and menu a la the crew behind MIMI Chinese. In addition to traditional numbers like twice-cooked pork and even the Hawaii-inspired orange chicken, there are must-have cold dishes like the husband and wife beef that’s made of springy trip and shank.

Try the silver needle noodles which is a stir-fry of hand-rolled noodles sourced from a nearby supplier with shiitake mushrooms, scallions, and a blend of three soy sauces, but don’t miss the charcoal grilled cabbage skewers that are slicked in cumin oil with aged vinegar nor the dry chili and cumin lamb ribs.

Perhaps one of the most buzzed-about downtown openings this year was this family-friendly local chain. Early months saw lineups despite the two levels of seating located just north of Yonge-Dundas Square.

The brand continues to cater to fans with its thick menu filled with generously portioned casual Cantonese fare from fried chilli turnip patties to super bowls of its namesake congee studded with lobster to the house special that's filled with assorted seafood. 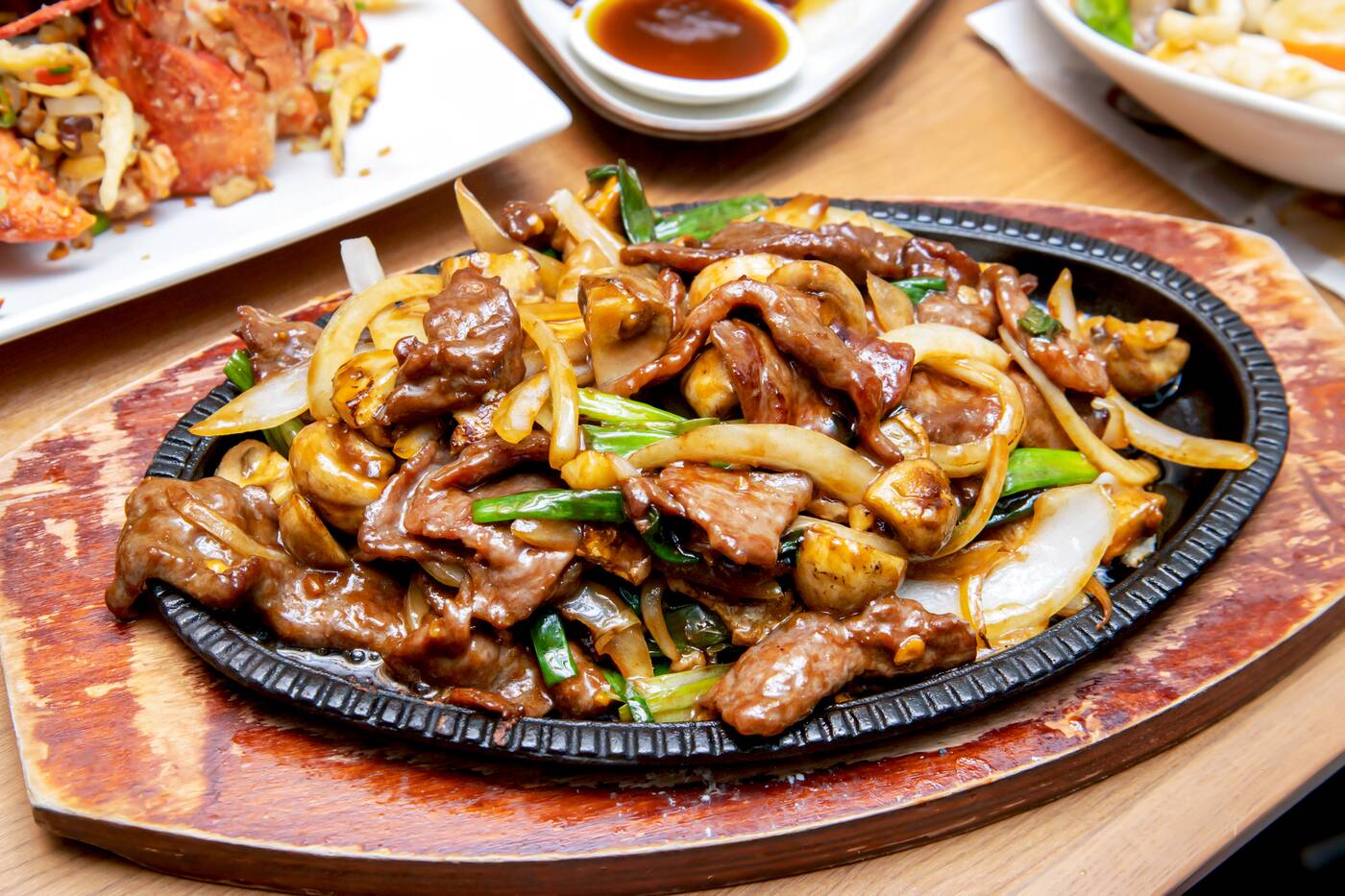 At Congee Queen Downtown the beef and mushroom dish comes to the table sizzling on a hot plate. Photo by Fareen Karim.

There are staples like Cantonese chow mein, sizzling beef with mushrooms, and the option to get fancy with dinner sets that might feature jumbo lobster, stir-fried prawns and scallops, and steamed live grouper.

Located in Scarborough's Skycity Shopping Centre, this new player in the Szechuan-style fish stew scene has been creating a buzz for its version of the classic dish that's served with pickled mustard greens.

While Szechuan-style spicy fish is available at many restaurants, More Fish's differs from most in its use of live fish. Each order involves harvesting a green bass from the restaurant's tanks before it's prepared.

The resulting dish has been attracting streams of crowds who have claimed that it's more tender and tastes fresher. Good customer service and their eel egg fried rice are other strengths.