An event from this past weekend at a Toronto restaurant has brought up some negative reviews from patrons on social media.

Louis Cifer Brew Works, a bar on the Danforth, was the site of a Canada Marches event and a meet-and-greet with James Topp on Friday, Sept. 30.

Topp is a former Canadian army vet who has been walking across the country in protest of vaccine mandates, related restrictions and has been a harsh critic of Prime Minister Justin Trudeau.

"The Freedom/Trucker convoy re-invigorated James spirit to do something; it now has him and the Canada Marches team moving across the country aiming to start a conversation which wasn't had with the truckers," reads the website.

He also hosted a protest march to Ottawa and according to The Canadian Press, was court martialed for having "spoken out against the federal government's C19 vaccine requirements while wearing his uniform." 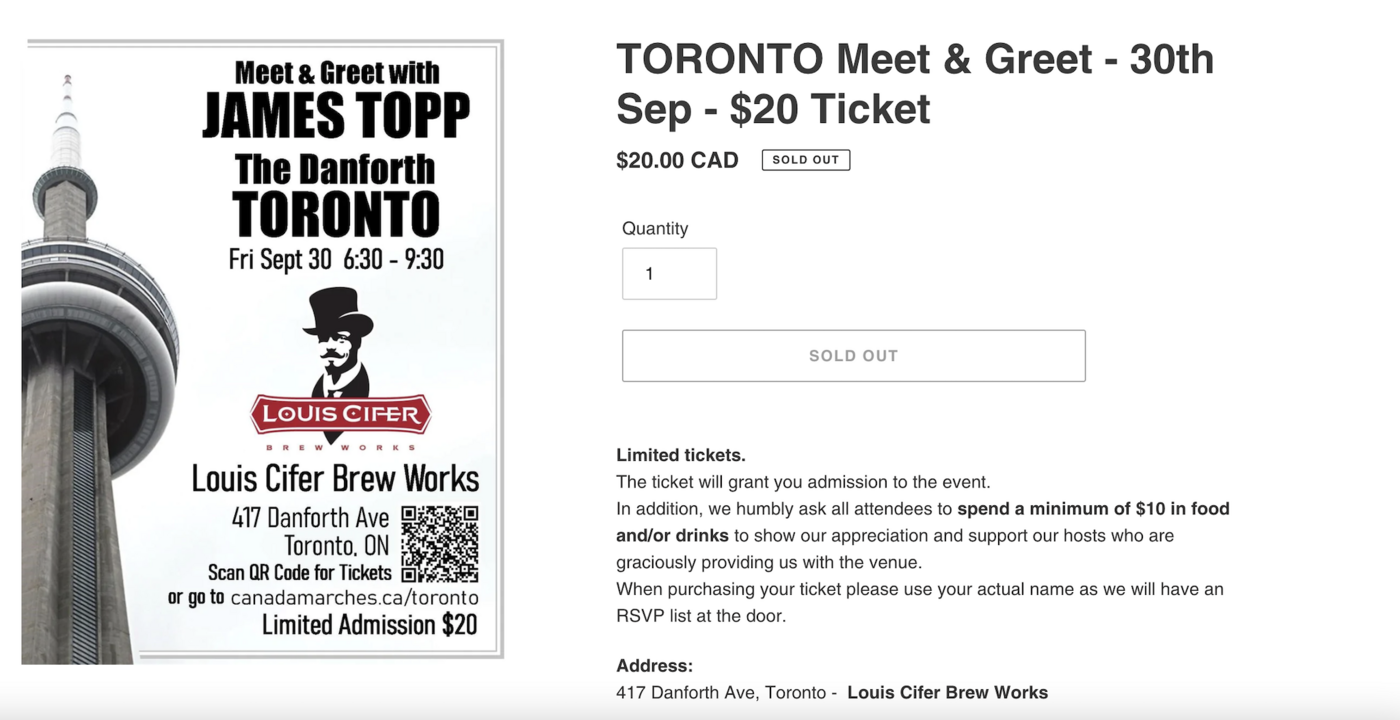 This event was verified by a sold-out event poster listed on the Canada Marches website and from a video posted by Topp himself, who said "I'm going to get the names of everybody who works here and give them a shoutout. Thank you to the servers here at Louis Cifer," and encouraged crowd members to leave positive reviews for the bar.

The caption on that video read "Last Event! James Topp Live in Toronto."

As the video pans to the jam-packed bar, the name 'Louis Cifer' can be read across one of the walls.

More than an hour into the video, Topp appears to introduce the bar owner by saying he wanted to 'give a shout out to Erin, the owner of Louis Cifer."

A blonde woman, presumably Erin, then takes to the stage and talks to the crowd and says "so many of you know that I've been an ally since the first lockdown," before telling patrons "I am your safe house, I'm your speak easy. You have a home here."

She also calls herself Erin.

A quick search for the owners of Louis Cifer shows multiple articles that list Erin Gamelin and Craig Abbott.

Immediately the backlash started pouring in on social media, particularly from a video posted by lawyer Caryma Sa'd which showed part of Erin's speech with the caption, "I believe this is the owner of Louis Cifer, the restaurant/brewery where the James Topp meet-and-greet was held."

I believe this is the owner of Louis Cifer, the restaurant/brewery where the James Topp meet-and-greet was held.

Many people said they would not be visiting the bar anytime soon and even some vowing to boycott the establishment completely.

City councillor for Ward 14 Paula Fletcher also commented on the video saying "this is very unsettling if it is the case. In the heart of Riverdale in Greektown."

This is very unsettling if it is the case. In the heart of Riverdale in Greektown.

The owners are also behind the Stout Irish Pub in Cabbagetown.

Really disappointing. A Danforth restaurant we’ll never patronize again. Family has been Louis Cifer regulars since it opened, incl takeout through pandemic closures, but all Convoyards lose our business.

She also made an appearance on NewsTalk 1010, speaking about restrictions and lockdowns, that introduces her as the owner of both bars.

WOW! She just killed off most of her neighborhood business. And TRIBE?? 🤮

Many were particularly disgusted that she called the crowd "her tribe" on Truth and Reconciliation Day, which is aimed to honour and mourn the thousands of Indigenous children stolen from their families and forced to attend residential school, where many were abused and died.

Disgraceful. And using “tribe”? So disrespectful, out of touch, and possibly worse.

Though almost all of the mentions on Twitter were negative, we can't say everybody was upset at the event, seeing as the bar was packed from wall-to-wall.

What a weird choice to make as a business owner finally coming out of the pandemic restrictions….

Will this speech and event financially hurt the restaurants or help them? I guess only time will tell.