Shocking video footage is circulating today of an apparent kitchen employee scooping up some sort of spilled food item from the ground behind a popular Chinese restaurant in Toronto, then putting said food into a bucket with his hands and bringing that bucket in through the back door of Hong Shing.

The scene is strikingly reminiscent of that time on The Office when Kevin Malone dropped his famous chili all over the carpet at Dunder Mifflin and then tried to "save" it by scooping the mess back into a pot using office supplies.

But, unlike Kevin's bumbling chili fiasco, nobody is laughing along with the Hong Shing clip — least of all the people who own Hong Shing.

The restaurant and its supporters are displeased that the video has been sent viral (courtesy of 6ixbuzzTV) without any context behind it, potentially harming a local business that has already been struggling under pandemic lockdowns and, recently, a devastating fire.

Hong Shing employee scooping up sauce from the street and then bringing it into the restaurant https://t.co/WsagXw8VDp

The clip in question first surfaced on Instagram early this week, when a user called @certifidee uploaded three videos showing a man cleaning up sauce and putting it into buckets in the alley behind Hong Shing, which can be found on Dundas Street West just east of University.

"Please don't support Hong Shing anymore this is disgusting," reads the caption of the original post, which was quickly re-posted to the wildly popular (and wildly controversial) local Instagram account 6ixbuzzTV.

In less than 24 hours, a 53-second-long, stitched-together version of the video has racked up more than 660,000 views.

"Hong Shing say it ain't so…," wrote 6ixbuzz in its caption, calling out the restaurant explicitly for those who might not recognize the video's location.

Grossed out comments and jokes about "special sauce" started pouring in almost immediately as people shared the video and vowed never again to eat at the restaurant, which has long been a favourite among office workers, students and people seeking late night eats in downtown Toronto.

So Hong shing had us eating the general tao w the snow in it ??? Violation

It didn't take long for Hong Shing to publicly comment on what it says actually took place (while taking shots at 6ixbuzz in the process.)

"We are disappointed that we still have to address issues and stories such as this recent post on 6ixBuzz where they continue the discriminatory narrative of Chinese restaurants being unsanitary and did not reach out to us to fact check or find out how the product was disposed of," reads a statement posted by the restaurant to IG Stories on Tuesday.

"Hong Shing has a full operational guideline on the handling and disposal of damaged goods. In the event that goods have been damaged during the receiving process in public facing spaces, all steps should be taken to restore the area to its original state."

"Damaged goods are moved into the Hong Shing premises to be received, inspected and documented by management regardless of condition," the statement continues.

"Losses are clearly marked for disposal and is removed by a food waste disposal service and not bundled with general waste We work closely with Toronto Public Health and follow all DineSafe guidelines." 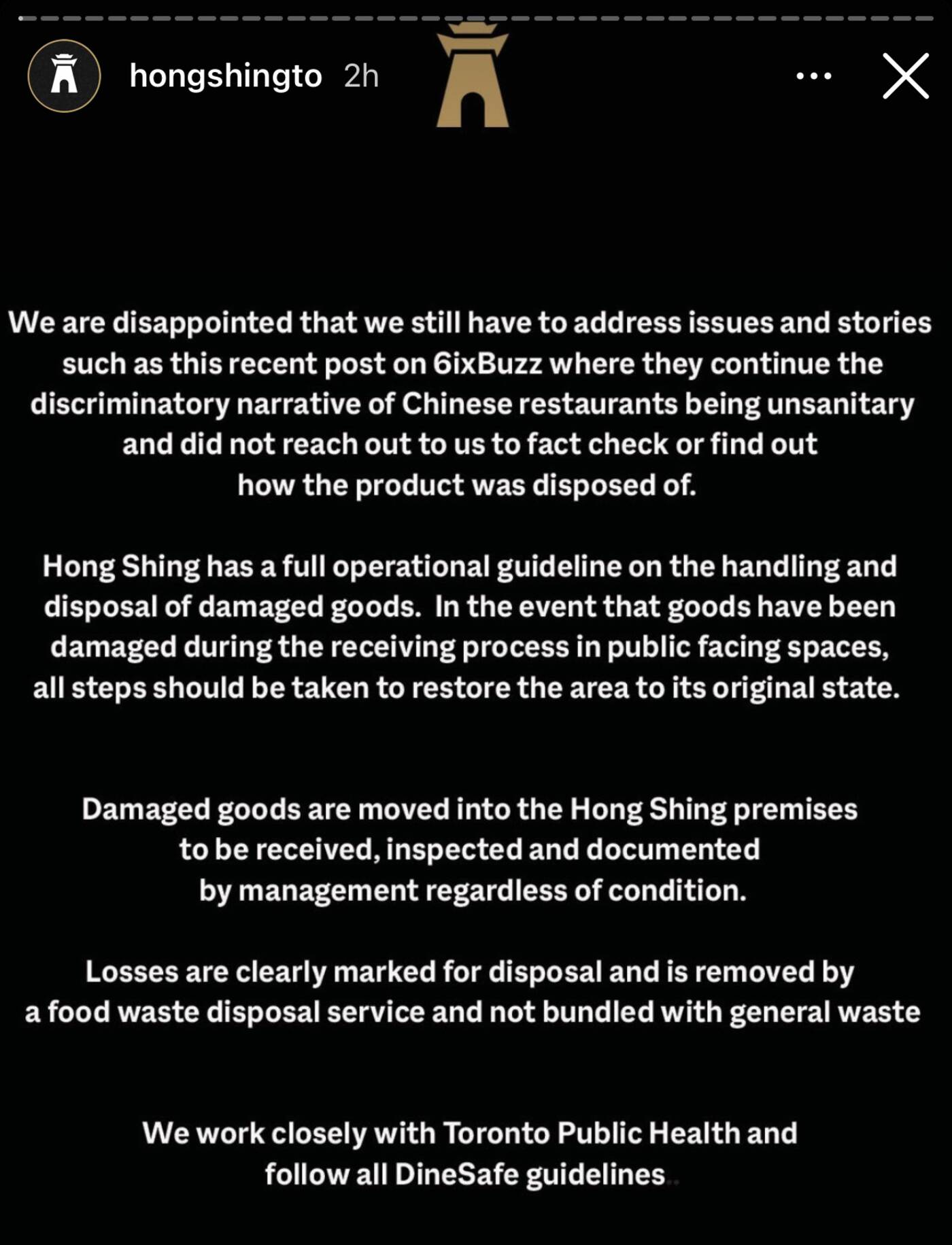 While some online seem reluctant to believe Hong Shing's explanation, many more say it sounds perfectly reasonable, even commending the restaurant for having a policy in place to clean up messes that could otherwise hurt local wildlife or passersby.

Fans of the restaurant and haters of 6ixbuzz have expressed overwhelming support for the nearly 25-year-old business on Instagram, as evidenced by all of the Stories reposted by the Hong Shing over the past 20 hours.

"Colin has put major efforts into his restaurant and brand to become a staple in the city. After a devastating kitchen fire during the holidays, his team managed to reopen for Christmas takeout," wrote one Instagram user when sharing Hong Shing's statement via Stories.

"The video and its opinions don't have the full context. This is the last thing another small business (restaurant) in the city needs after these brutal 2 years."

"So saddened at @6ixbuzztv and the girl who posted the video of @hongshingto and decided it would be nice to make up her own NARRATIVE of events, harming a wonderful local business especially during such a happy holiday time," wrote another. 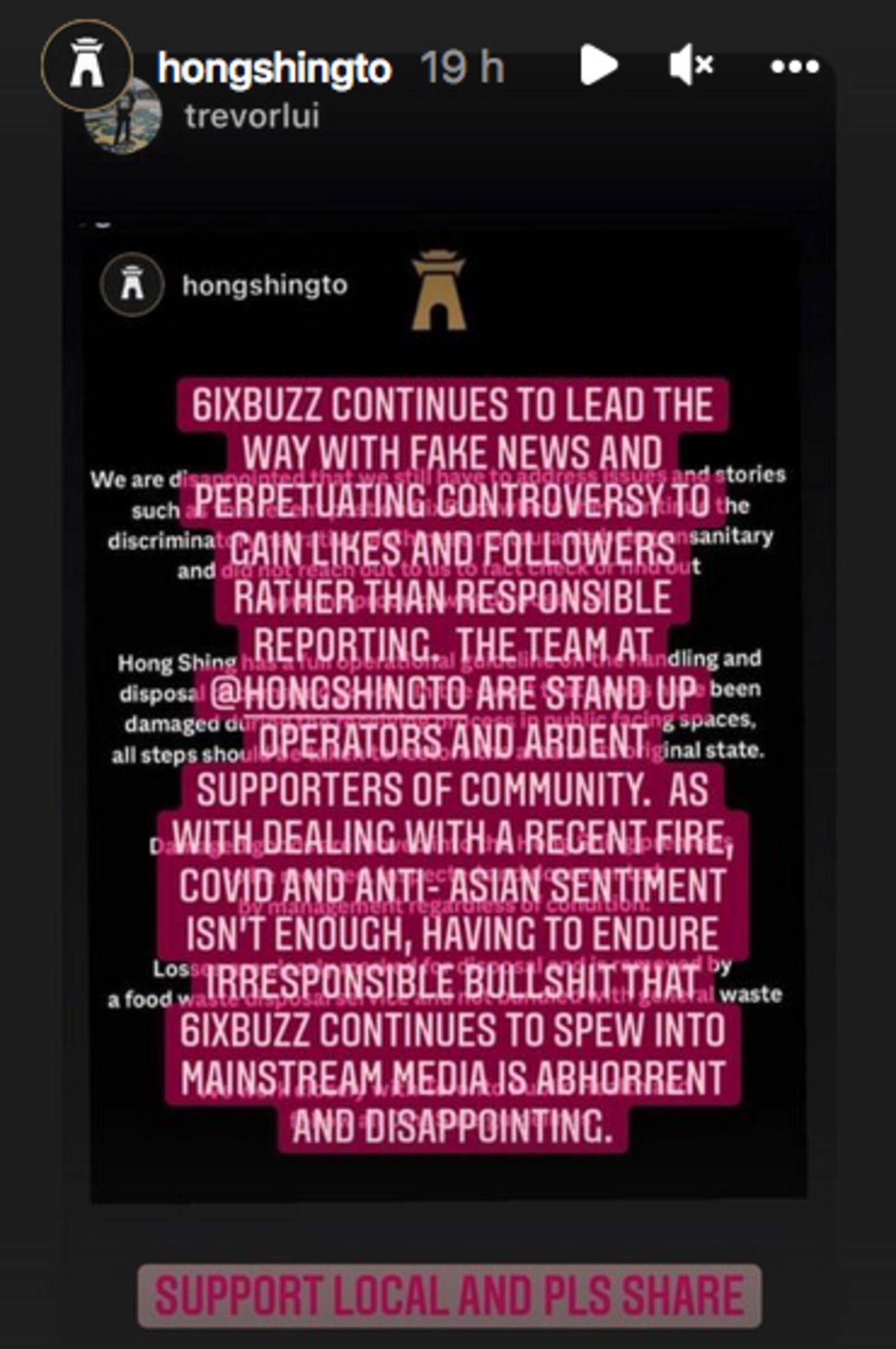 "Imagine being a business owner and dealing with the last 2 years of restrictions/lockdowns and then recently recovering from a kitchen fire, to get back up running in time for the holidays only for some fake
news account to post something without any context," wrote another supporter still.

"We have personally eaten here for many many years. Colin and his staff has always provided us with a great experience and amazing food. We should be building each other up, not attacking small businesses."

Some are using the case to highlight rampant anti-Asian racism in Toronto and speak to the harm that baseless stereotypes can cause. Others are pointing out that Hong Shing itself has been accused of racism in the past.

Across the board, people seem to agree that there's no place for harmful stereotypes or race-based discrimination in this city.

"Local restaurants do not need this type of slander especially during covid. The dude was just mopping up a spill doing his job," wrote one Instagram user when sharing Hong Shing's statement. "This whole dirty Chinese restaurant stereotype is taking us back 50 years." 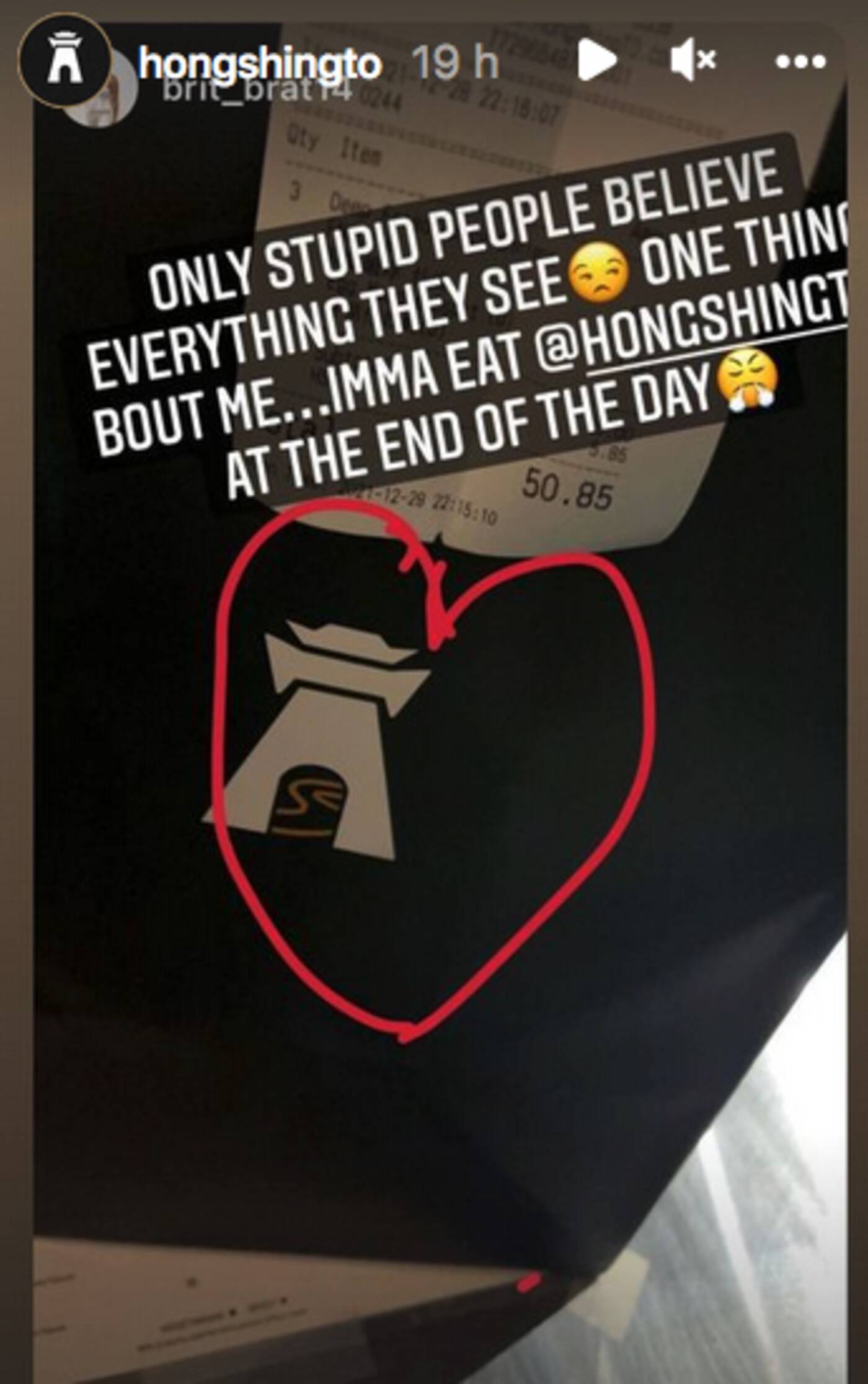 Hong  Shing, appreciative of the support, announced last night that it would be temporarily offering 30 per cent off all online and pick up orders for people using the code "SUPPORTLOCAL."

The owner of the restaurant, which has dealt with race-based controversy in the past, has yet to respond to an immediate request for comment from blogTO, but did tell us this fall that he was rushing to reopen after the fire by Christmas — something that he managed to do.

"We are hopeful that now we can look ahead and be excited for upgrades for the restaurant especially leading into next year," said Colin Li at the time.

"There are not many places in the city around for 25 years, and for us to have a chance to give it a facelift, we are excited to share to our loyal fans and create a better experience with them."