Tucked away behind a salon in Riverside is a bright green shipping container serving piping bowls of sweet potato vermicelli and beef noodle soups in pouches.

Tong Mein, which translates simply from Cantonese to "noodle soups," is exactly what owner Dat Tran is serving. 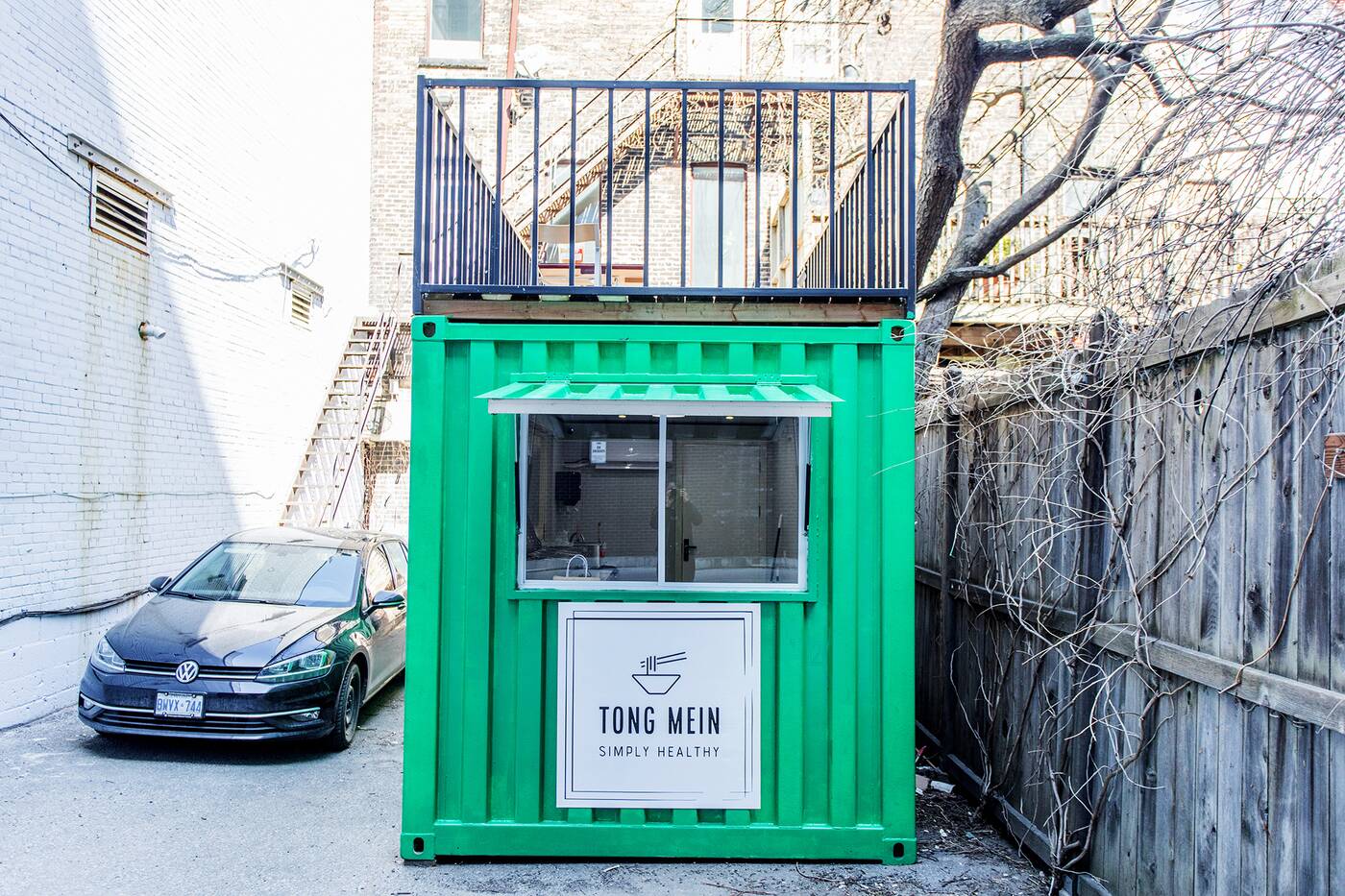 Dat Tran has launched Tong Mein out of a shipping container behind his hair salon Album Hair.

Tran has owned hair salons in Toronto for over a decade. Recently he decided to buy a 160-square-foot shipping container, and in the last few weeks, has launched Tong Mein in the parking lot behind his salon Album Hair at 639 Queen St. East.

No one in the neighbourhood knows Tong Mein exists yet, but Tran says the word is spreading. 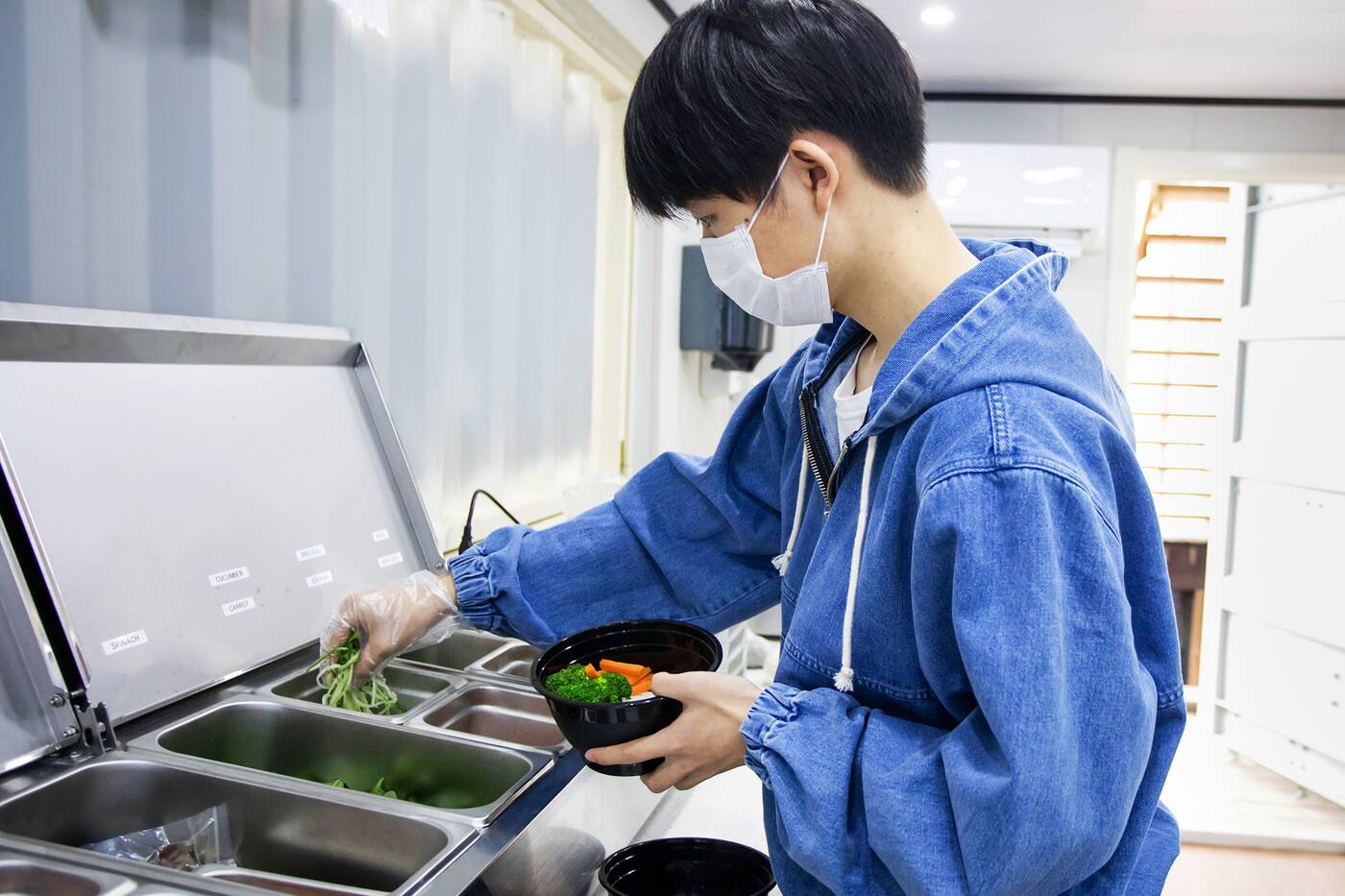 The goal: to cook up the healthiest broth possible. Right now the menu is made up of four gluten- and nut-free noodle soups. There are no preservatives, dairy products, or traces of the ever-misunderstood additive MSG. 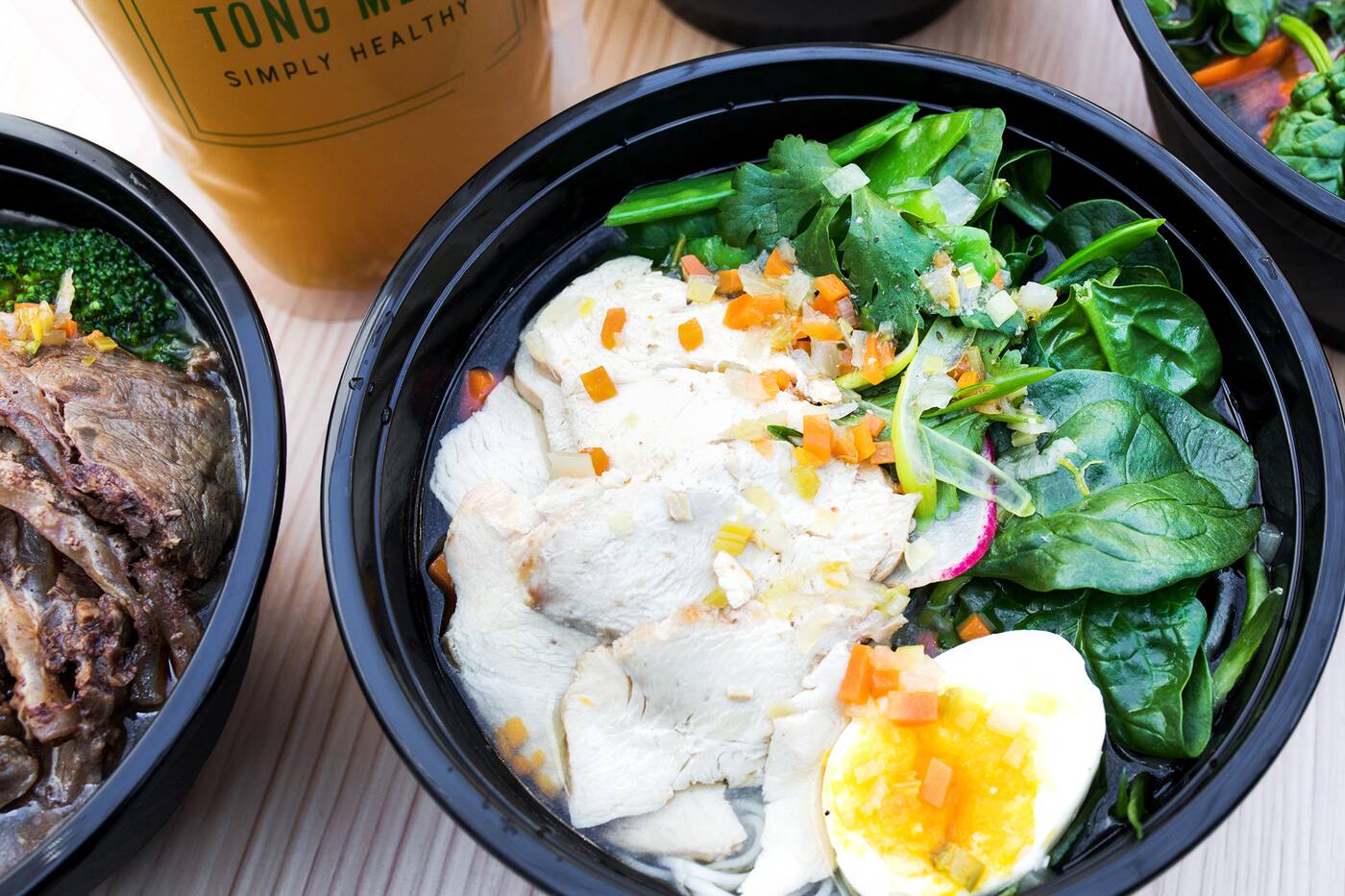 "Our lifestyle has changed form what it was during our parents' generations," says Tran, whose background is a mix of Chinese and Vietnamese. As a former vegetarian, Tran recalls his dining out experiences as consistently disappointing. 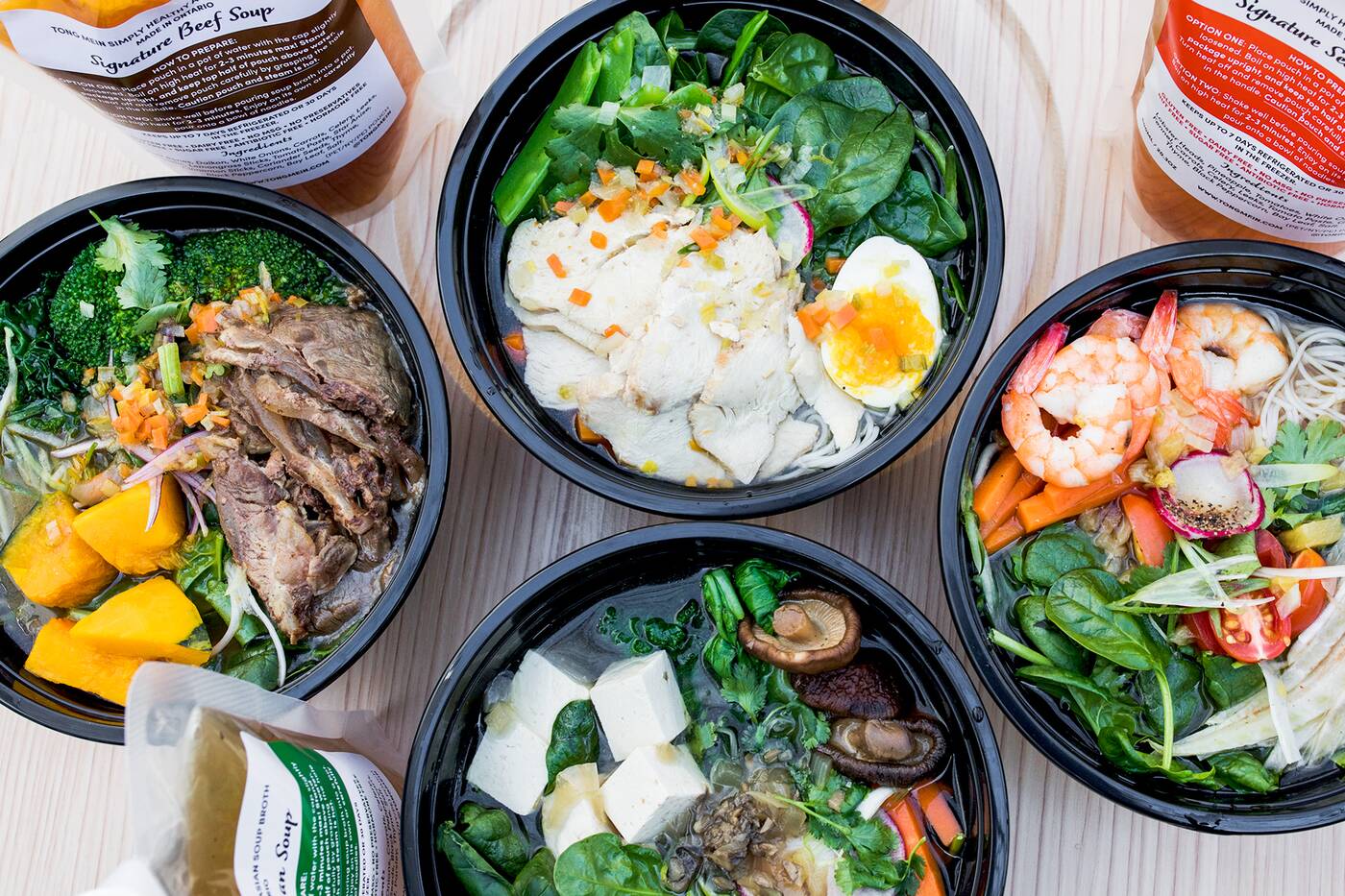 All meals are free of preservatives, nuts, MSG, gluten, and nuts.

For those who unabashedly favour taste over nutritional value (or at least a sweet spot in between) there's a wariness to embracing a menu that labels itself as healthy. Toronto has had its share of restaurants throw a bone to vegheads with healthy options that, let's face it, taste like boiled salt water.

And in the wake of our homegrown #brothgate controversy, it's worth noting a worriesome trend of companies trying to 'fix' Asian noodle soups, often framed like slops of sodium and glutamate with nary a veggie in sight for marketing's sake. 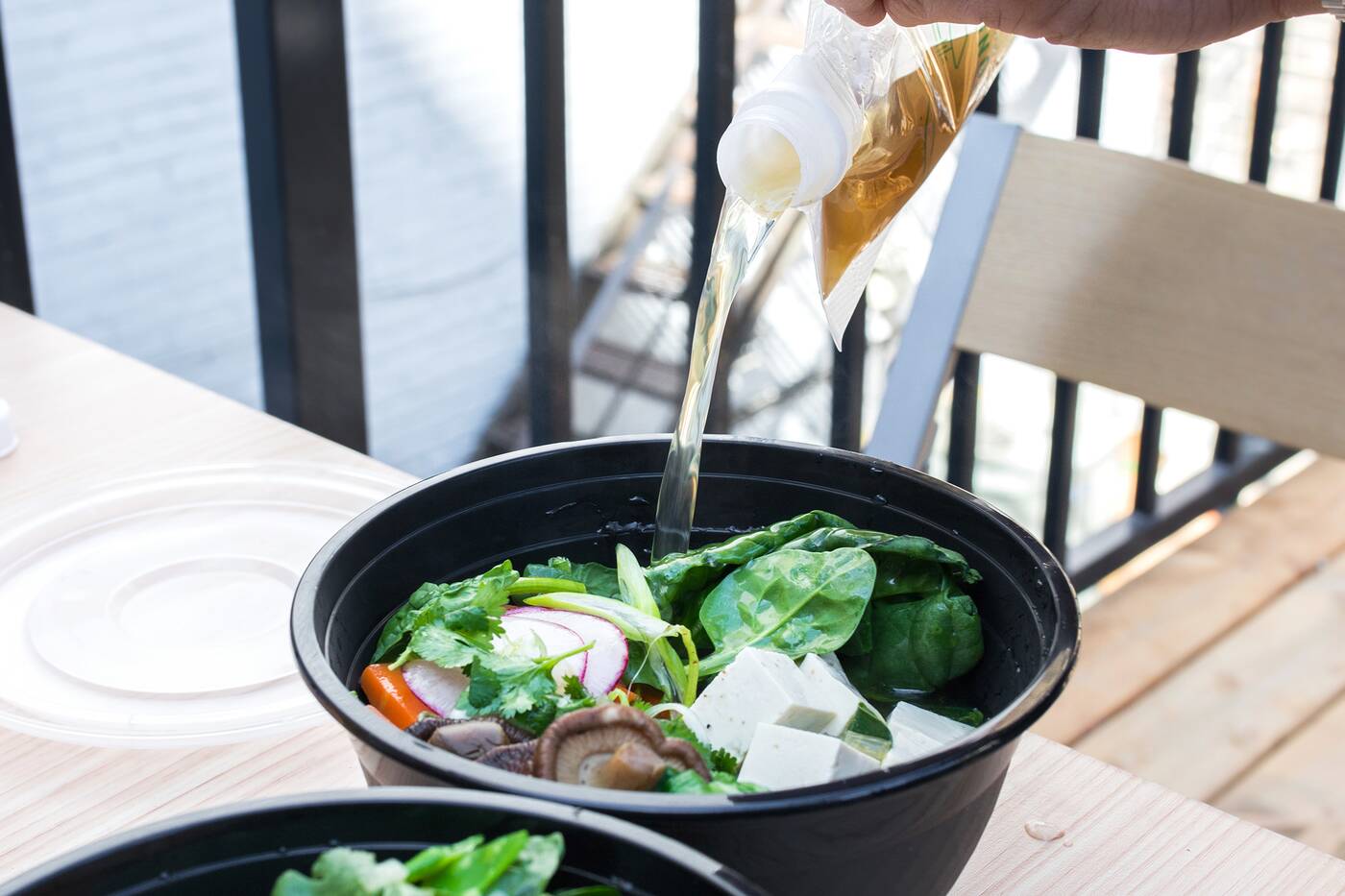 Broth is served in handy pouches that allow customers  to transport everything home safely.

Trang says that Tong Mein's M.O. is less about fixing and more about adding, specifically ingredients and time.

Soup broths—beef, chicken, vegan, and seafood—take around 8 to 12 hours to make a day. At any given time, he has four vats of soup going at his commercial kitchen at Carlaw and Lakeshore. 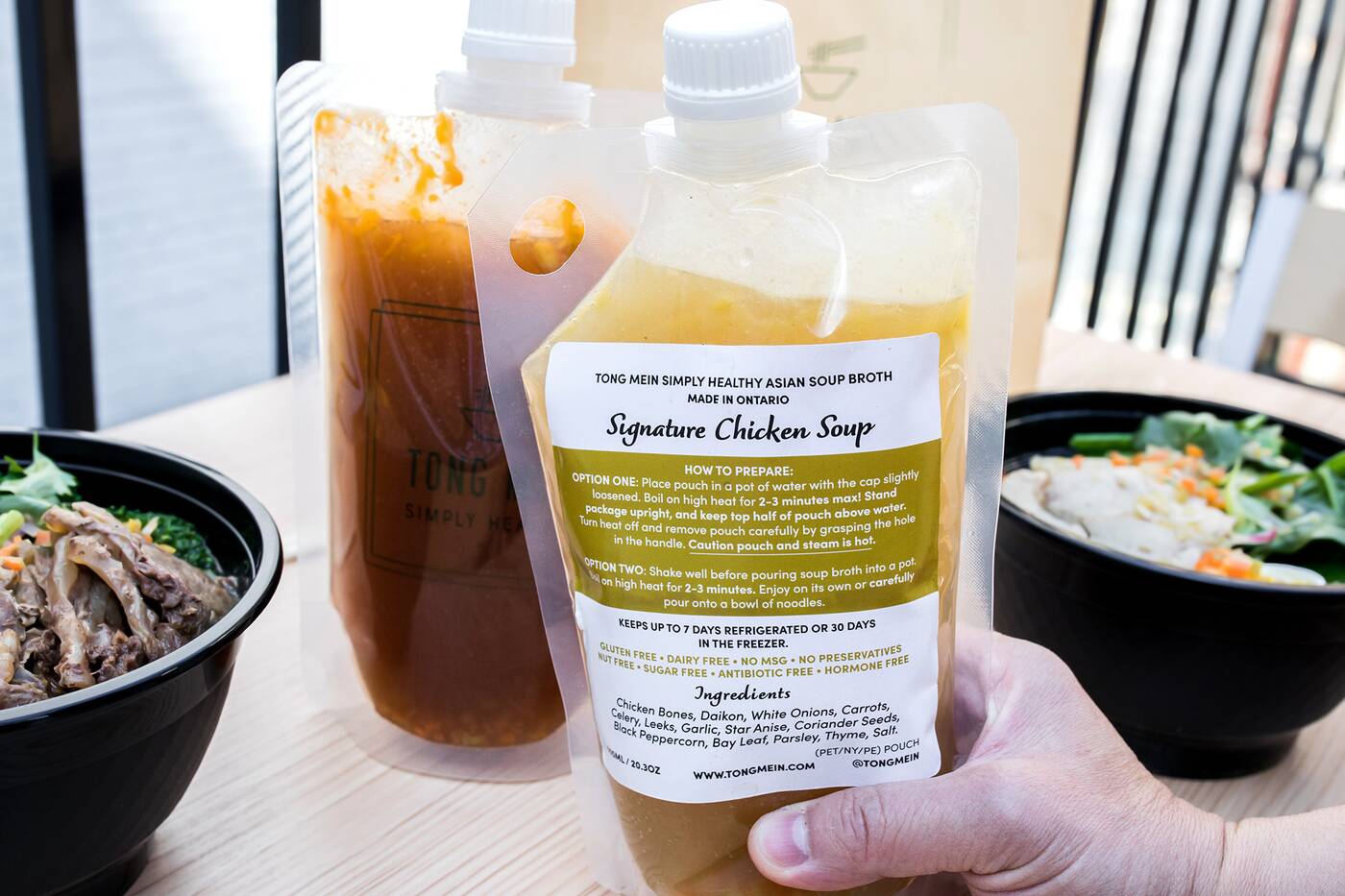 Broth comes in pouches for individual purchase or with an order of the noodle soup.

You can get them in a bowl or to-go in handy 660 mL pouches, which are now carried by the local distrubutors Annex Distrbution, FarmshareTO, FreshWagon, and Triple A Food Trading. 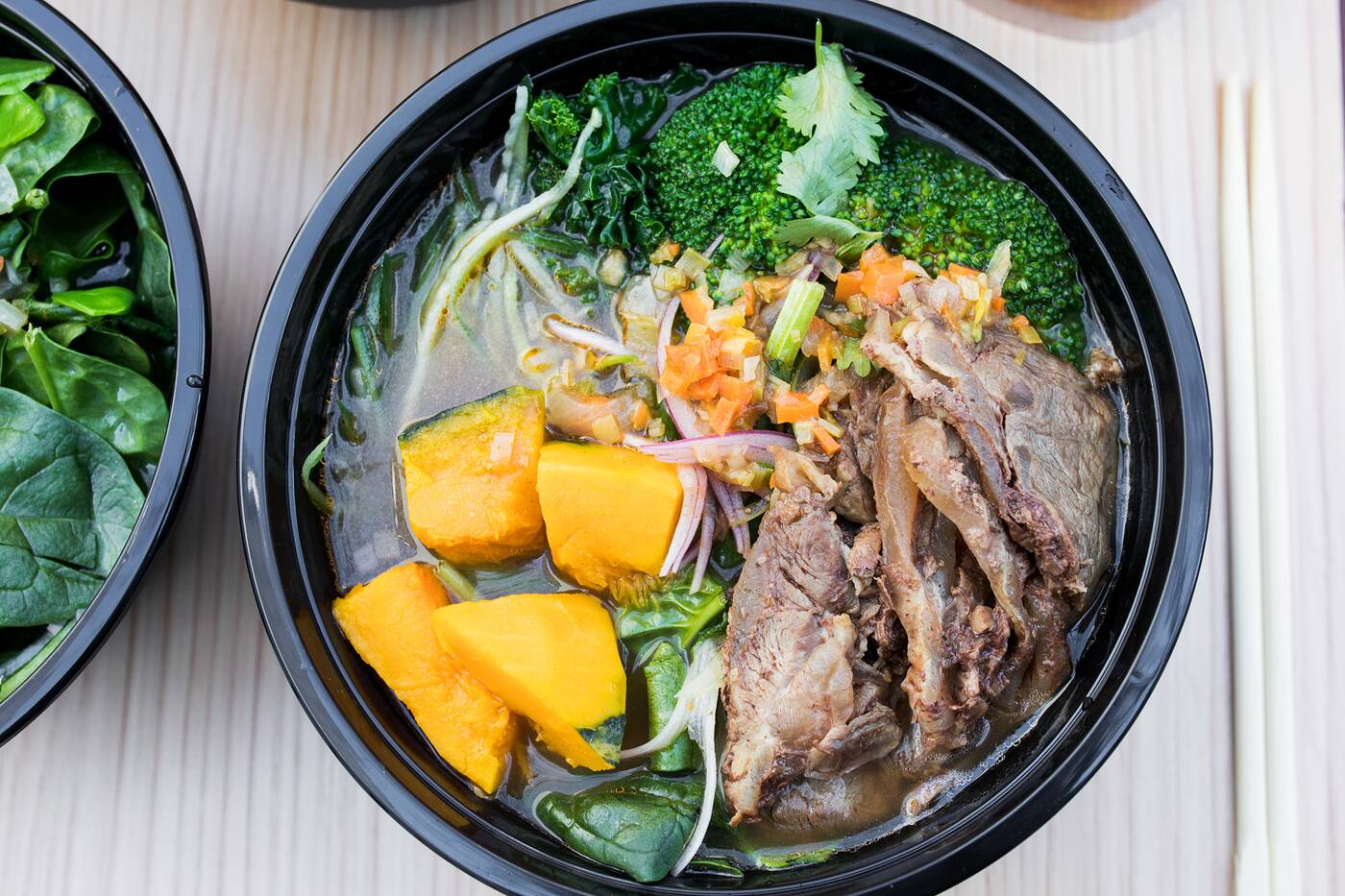 Beef is sous-vide and placed on top of noodles in a beef bone broth.

The process for beef broth includes roasting the meat, which is antibiotic- and hormone-free, and adding an abundance of veggies. When it comes to cooking the beef and chicken that tops the bowls, everything is done sous-vide.

In the seafood broth, ingredients like lobster head, pineapple, and black peppercorn give the noodle soup its flavour. 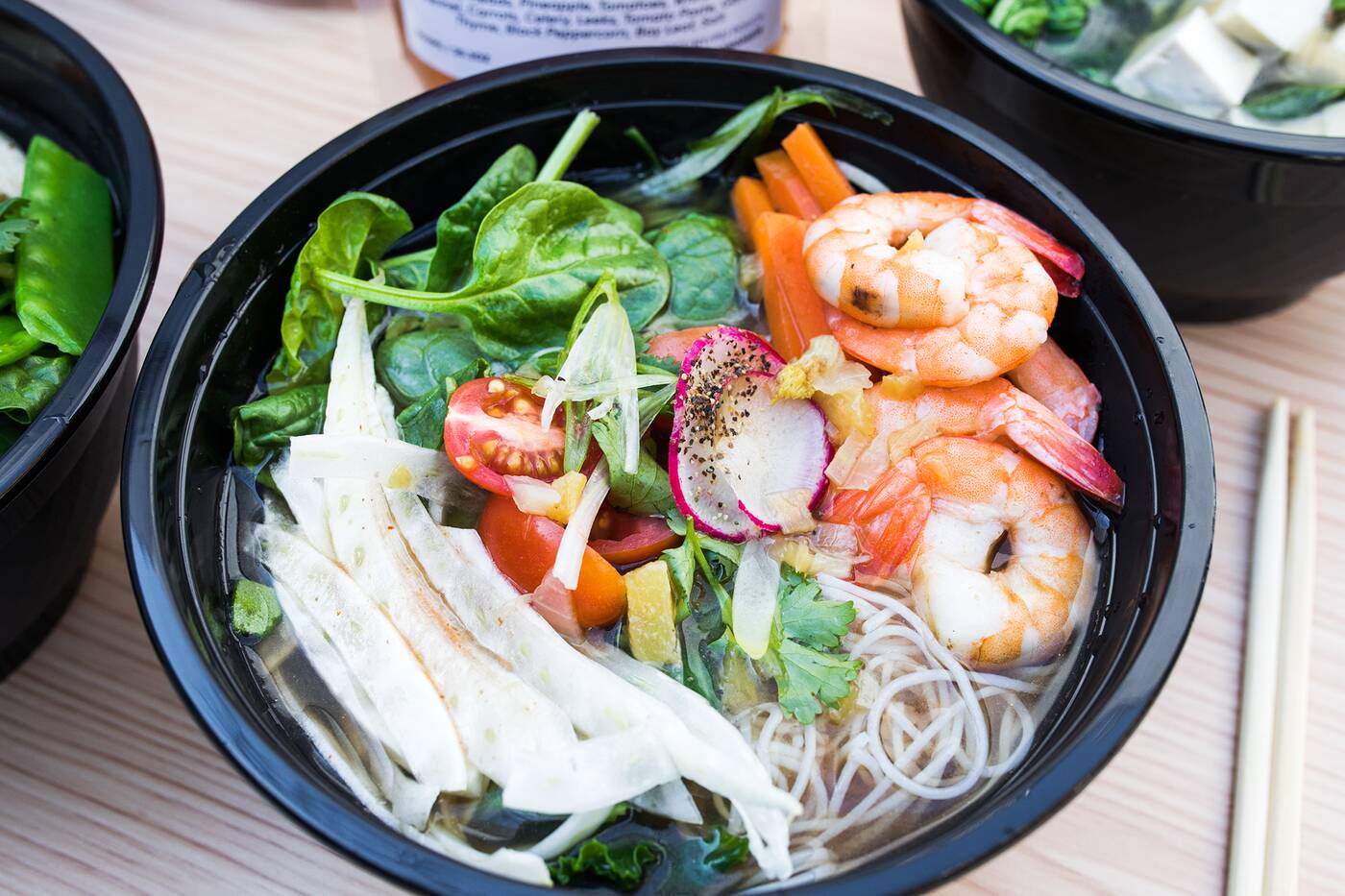 In bowl form, there are more than 10 other veggies added on top. Aside from typical ingredients like tofu and bok choy, there's also kale — less commonly found in Asian cooking, but an advantage of Canadian agriculture. 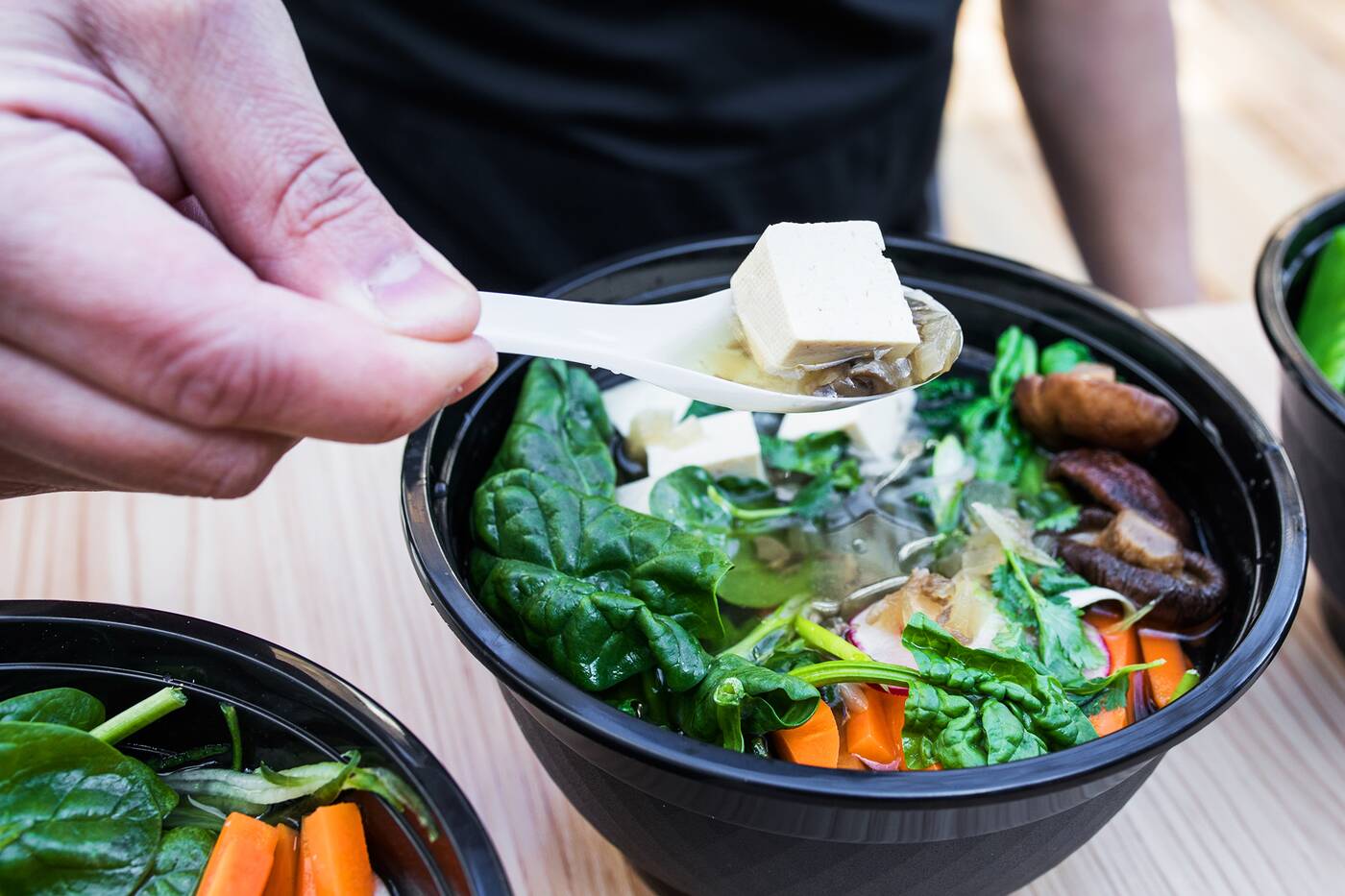 "That's how I look at food: we all have our routine,"says Tran.

"But I'm trying to introduce this new routine, being Asian living in North America, having this idea of wanting to expose this culture to an alternative." 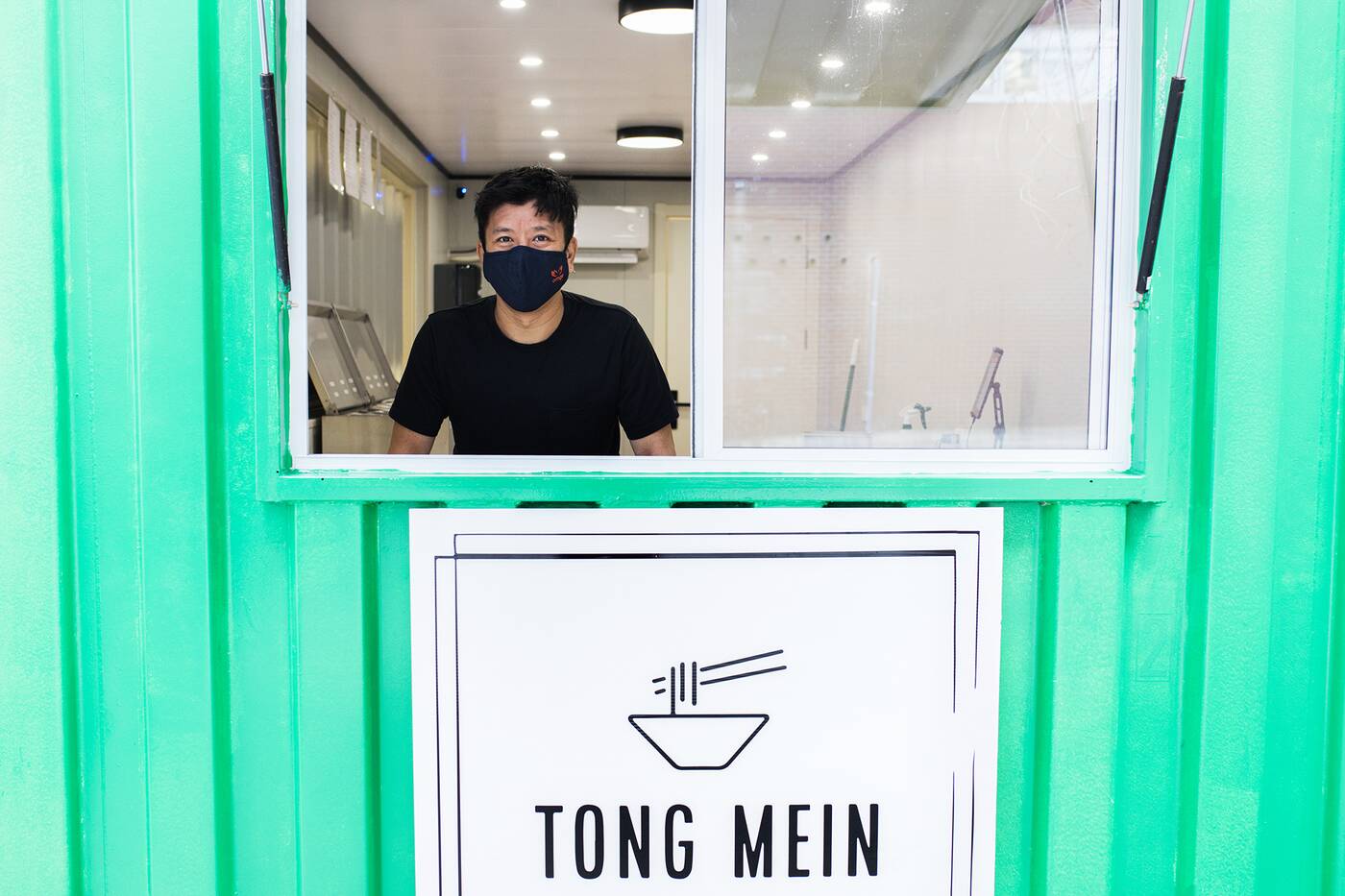