Out of an old narrow house in downtown Toronto, Queenie Ng and Jackey Lee are running a Hong Kong-style cafe, minus the seating.

The menu at Oh Snack!, which the married couple officially opened in January, is anchored by staples commonly found at cha chaan teng: fast casual tea houses from Hong Kong offering menus of HK-style snacks like fish balls on skewers, Western eats like borscht and macaroni soup with satay beef. 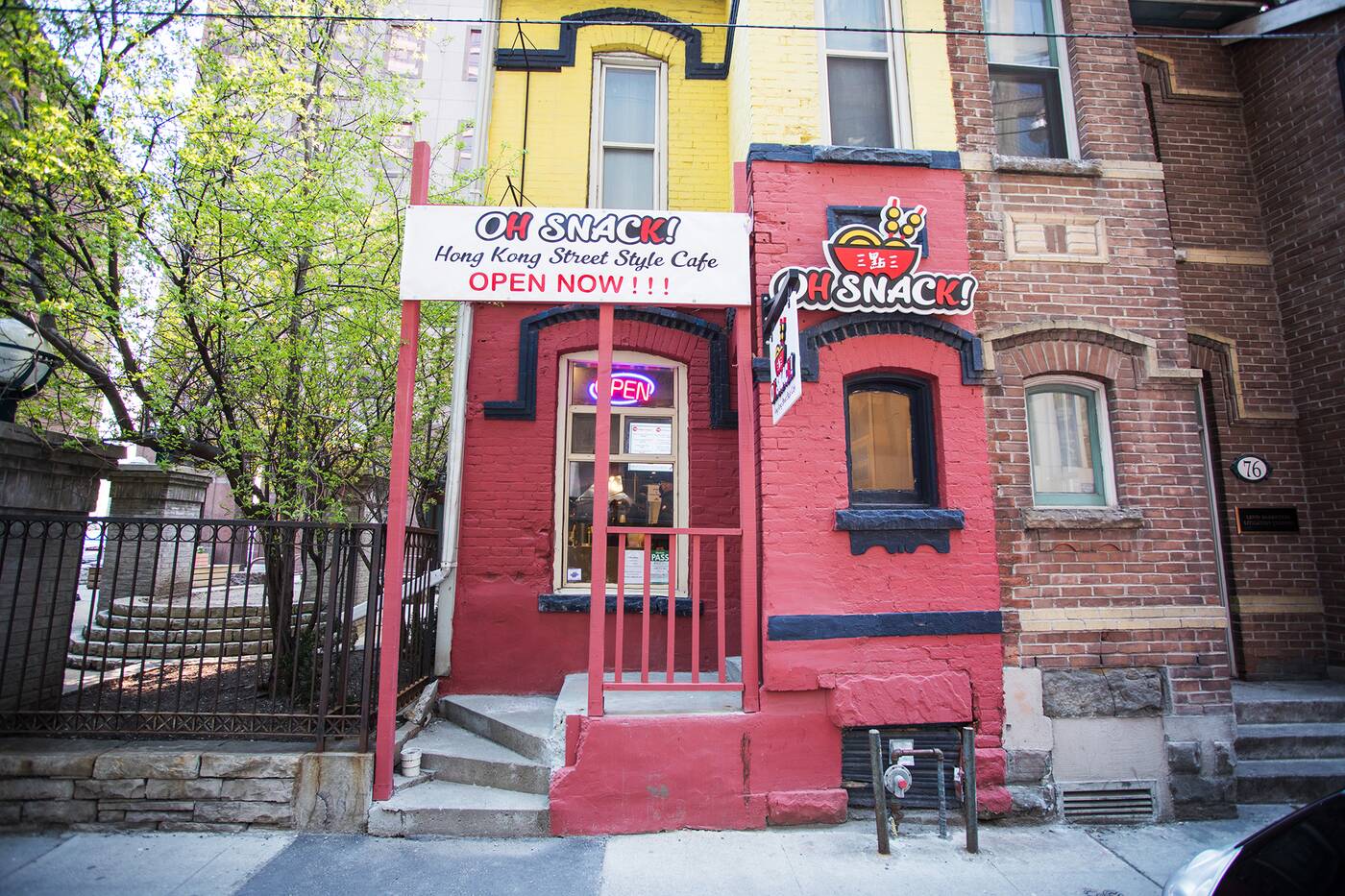 Oh Snack! opened on Gerrard St. in January with a menu of Hong Kong-style cafe dishes and snacks.

A traditional cha chaan teng experience is, for the most part, a sit-down one.

One of the joys of afternoon tea is being in the thick of a bustling restaurant, spending anywhere from just over 20 minutes to a couple of hours over a cup (or several) of steeped black milk tea. 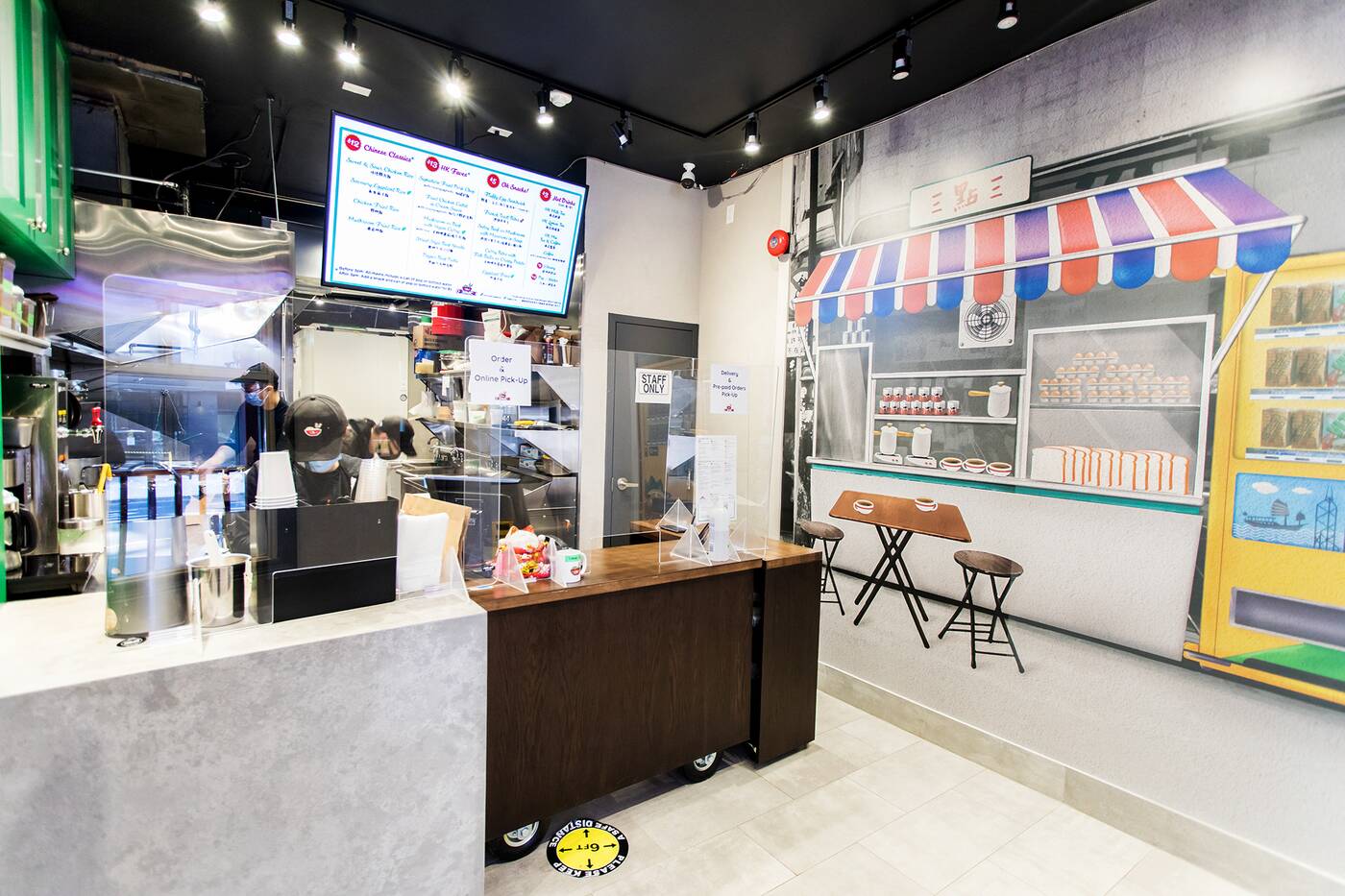 Unlike many of the older cha chaang teng across Toronto, there's no seating at Oh Snack.

But surrounded by offices, hospitals, plus ongoing stay-at-home orders amidst a global pandemic, Oh Snack!'s M.O. leans exclusively on a takeout and delivery model.

That means everything on Oh Snack!'s menu is designed to keep. For Ng and Lee, who grew up going to and working in Chinese restaurants, the trade-off of the dine-in is worth the accessibility for those living outside of Chinatown, Markham or Scarborough, where cha chaan teng abound. 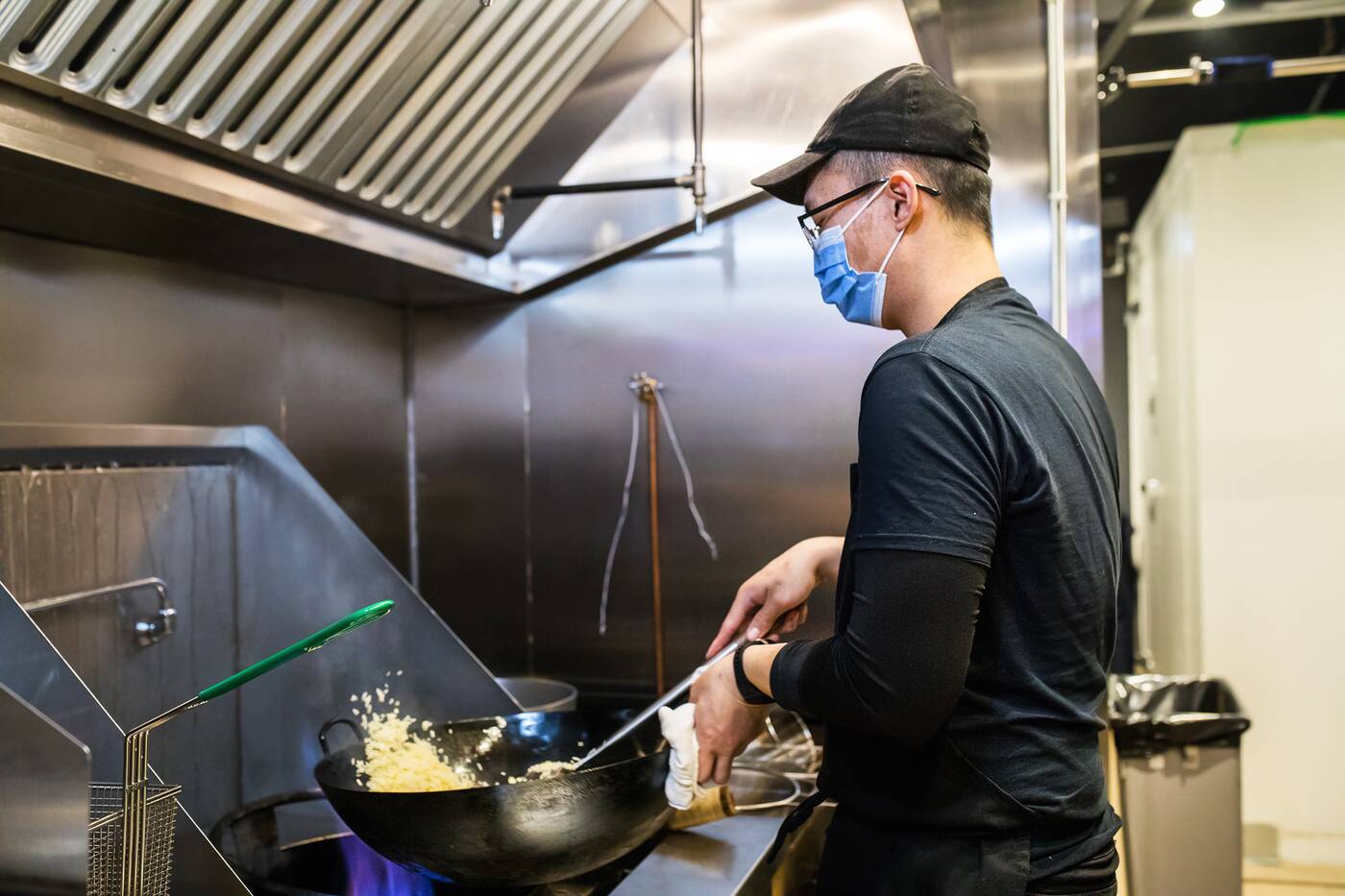 Jackey Lee and Queenie Ng worked in software and marketing respectively before moving into the food industry.

"What we've found working and living downtown in the past few years is that there are fewer and fewer places for HK-style food," says Ng.

"There are many people who don't have a car and can't enjoy the convenience nearby. Toronto being such a foodie city, we figured this would be a great way to share and preserve the culture of Hong Kong." 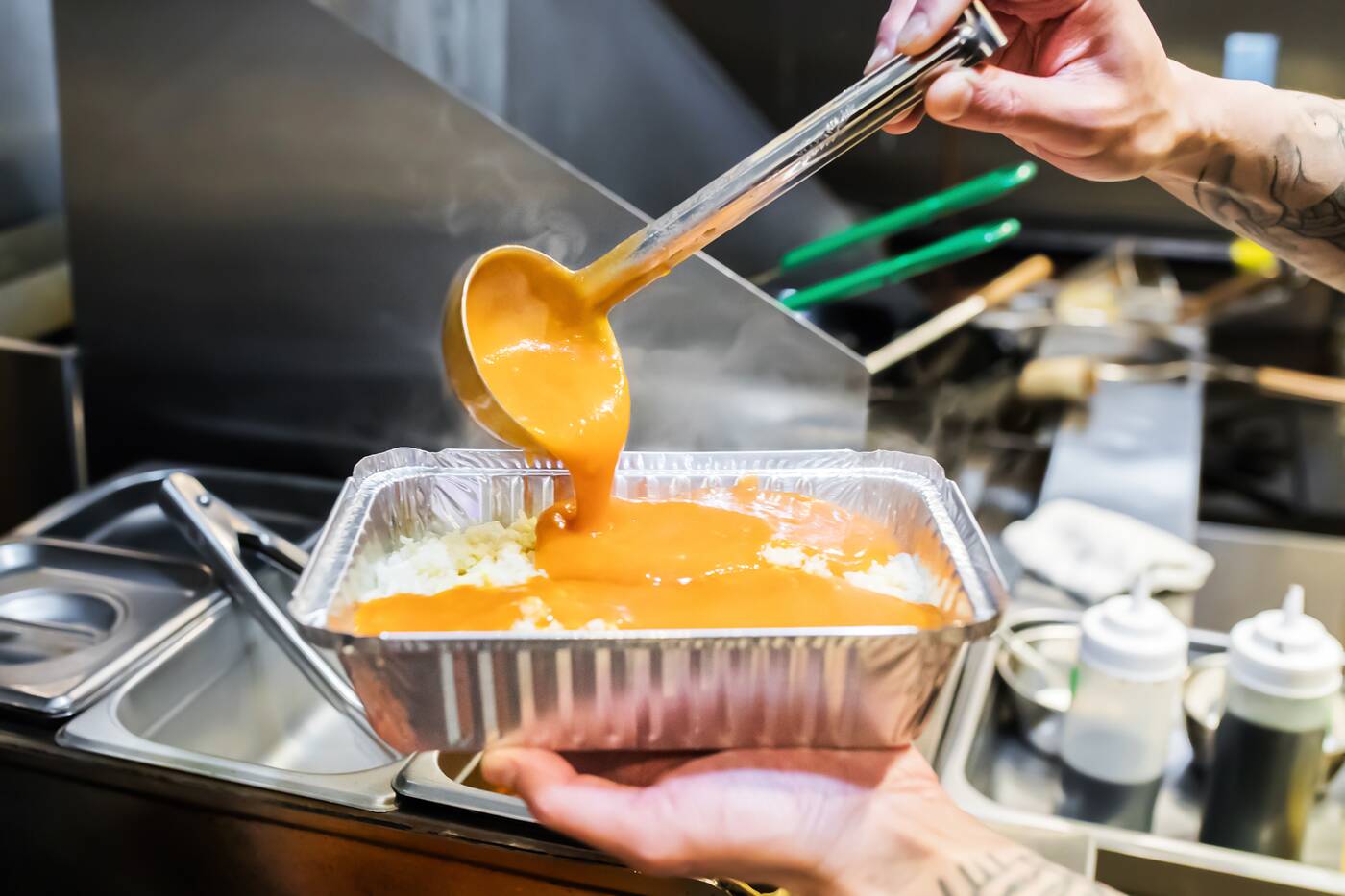 Food at Oh Snack! is designed to hold up in takeout boxes.

Ng comes from a family of restaurant owners: Her parents were the ones who opened Chinatown's iconic Goldstone Noodle Restaurant, nearly 30 years ago after moving here from Vancouver in the mid 90s.

Her parents sold the business and retired a decade ago, but Ng grew up working at Goldstone, which focused more on BBQ duck, char siu, and wonton soup than HK-style eats. 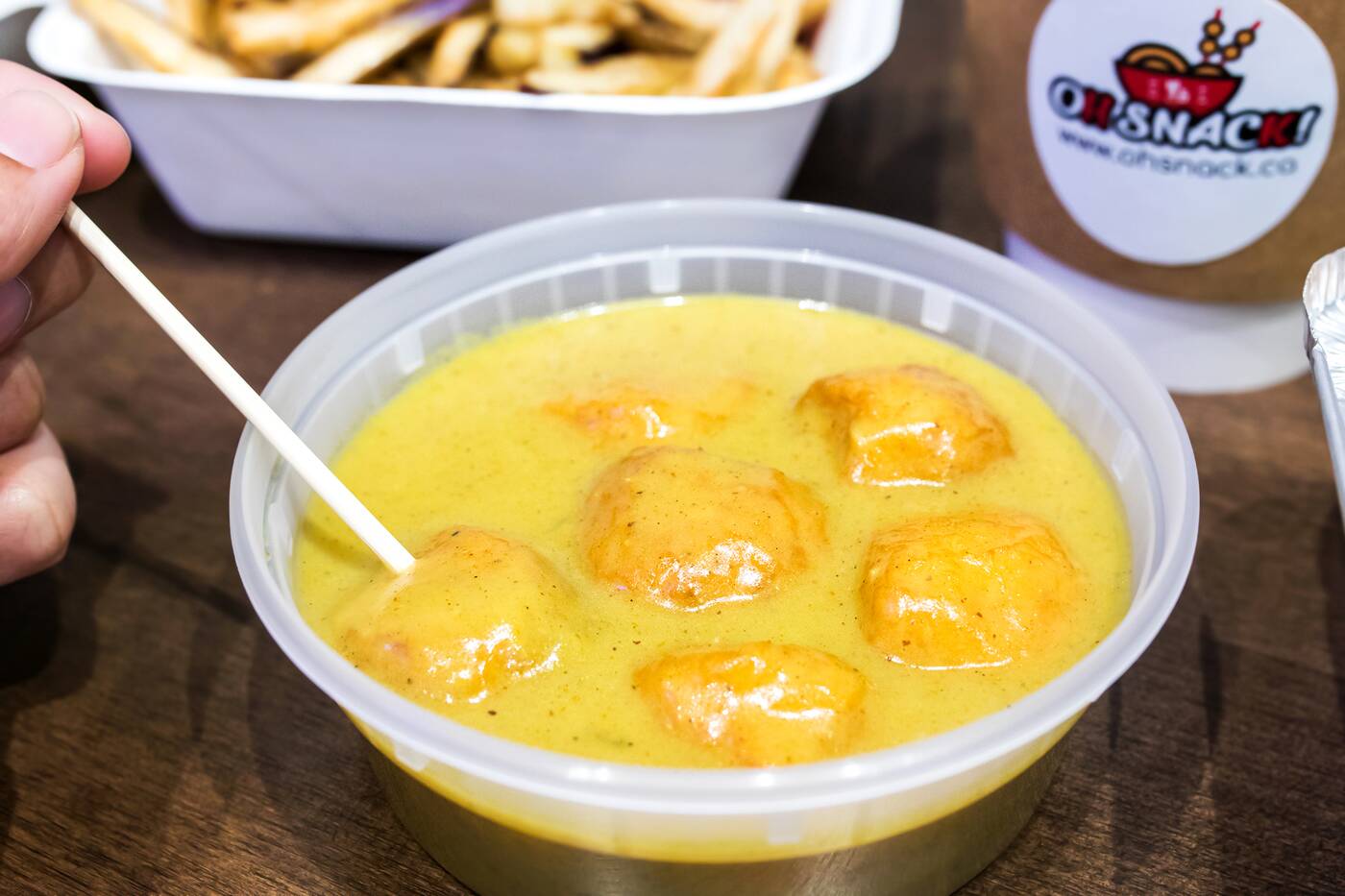 Convenient snacks like fish balls in curry are easy to eat when you're on the go.

"Most of the baked stuff takes a long time, a lot of the customers don't want to wait," she says. "We recognize the demographic downtown, everyone's pressed for time, especially during lunch time."

Now with a business of their own, Ng and Lee have had to find the perfect sweet spot between convenience and quality. 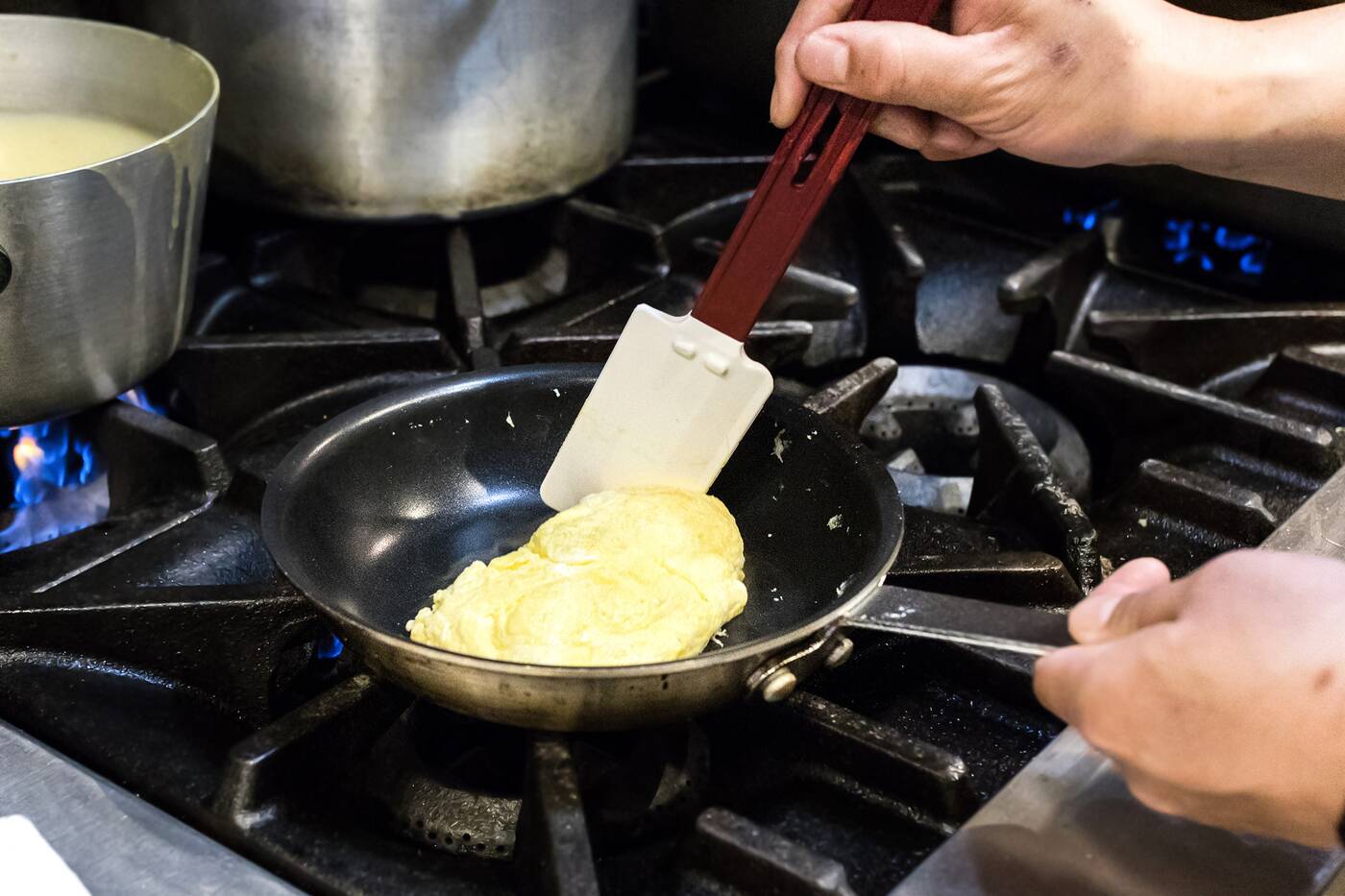 Both Ng and Lee's families are from Hong Kong and regularly ate at HK-style cafes.

You can find the couple at their narrow restaurant at 78 Gerrard St. West (which was once home base to the famed Canadian art collective General Idea) from Monday to Saturday.

The majority of their orders are walk-ins, but Oh Snack! is on a few delivery apps and they offer scheduled pick-ups on their website. 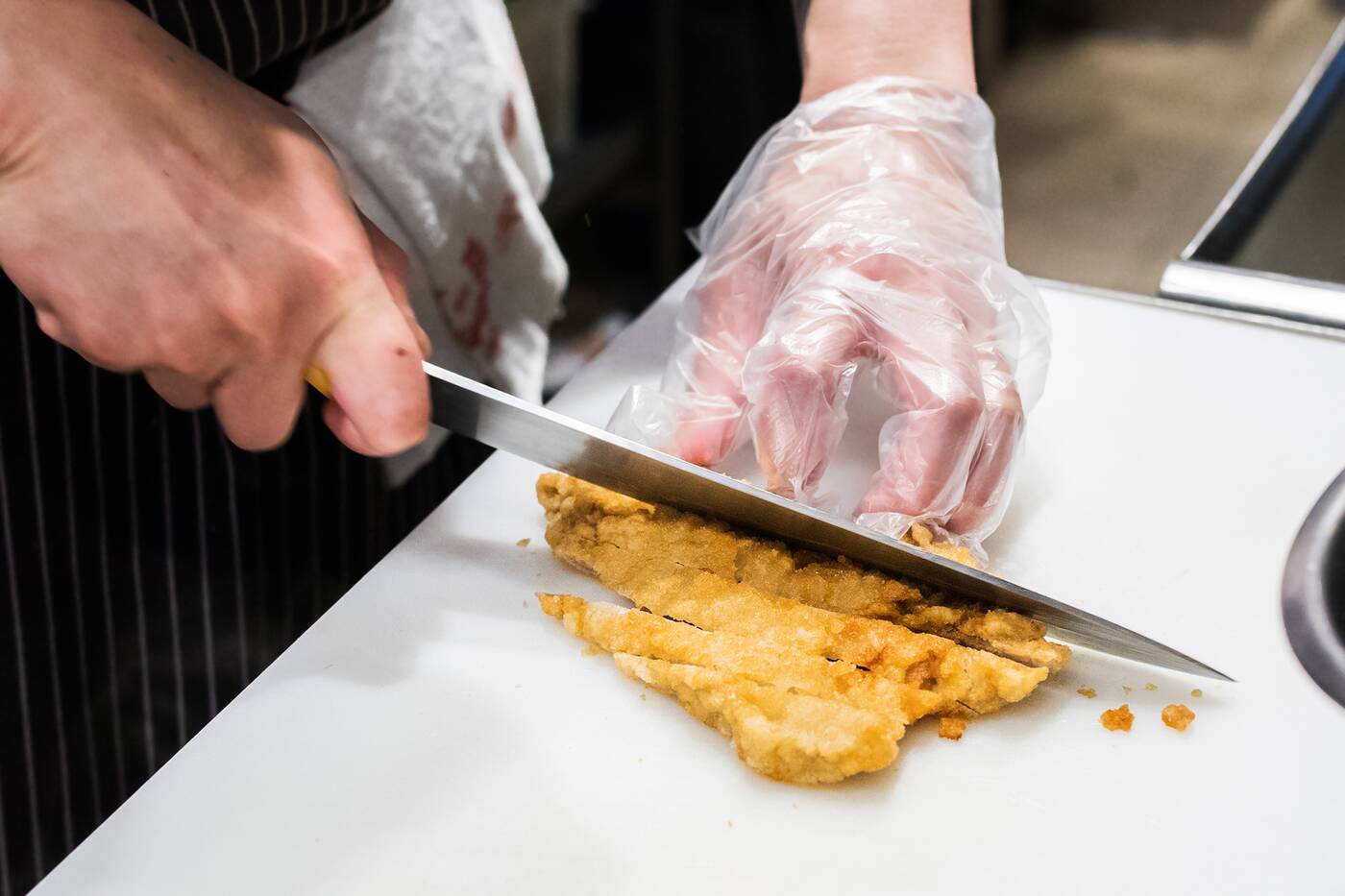 Lee really worked at perfecting the breading of their signature pork chop.

Their signature dish, a fried pork chop with tomato sauce and cheese on your choice of fried rice or spaghetti, was a recipe that took Lee multiple trials and errors. 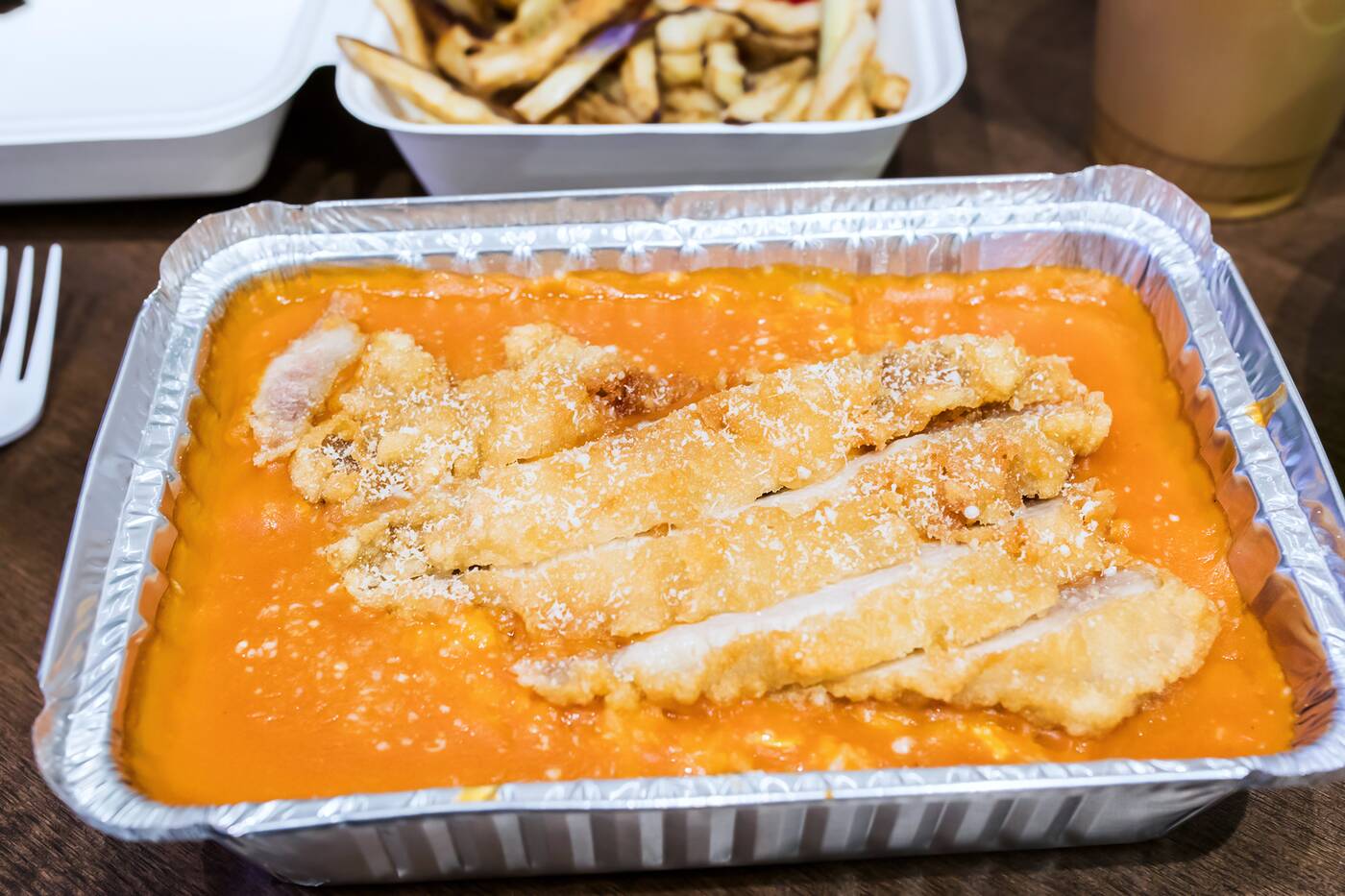 The pork chop is deboned and cut into slices, unlike some cha chaan teng, which leave their chop intact.

The final result: a thick piece of pork chop (deboned and easier to eat on-the-go without a knife) coated in breading that retains its crispiness even in the takeout container.

A quintessential order of thick, egg-battered French toast served with peanut butter inside and maple syrup on top is pre-cut into little bite-sized cubes. 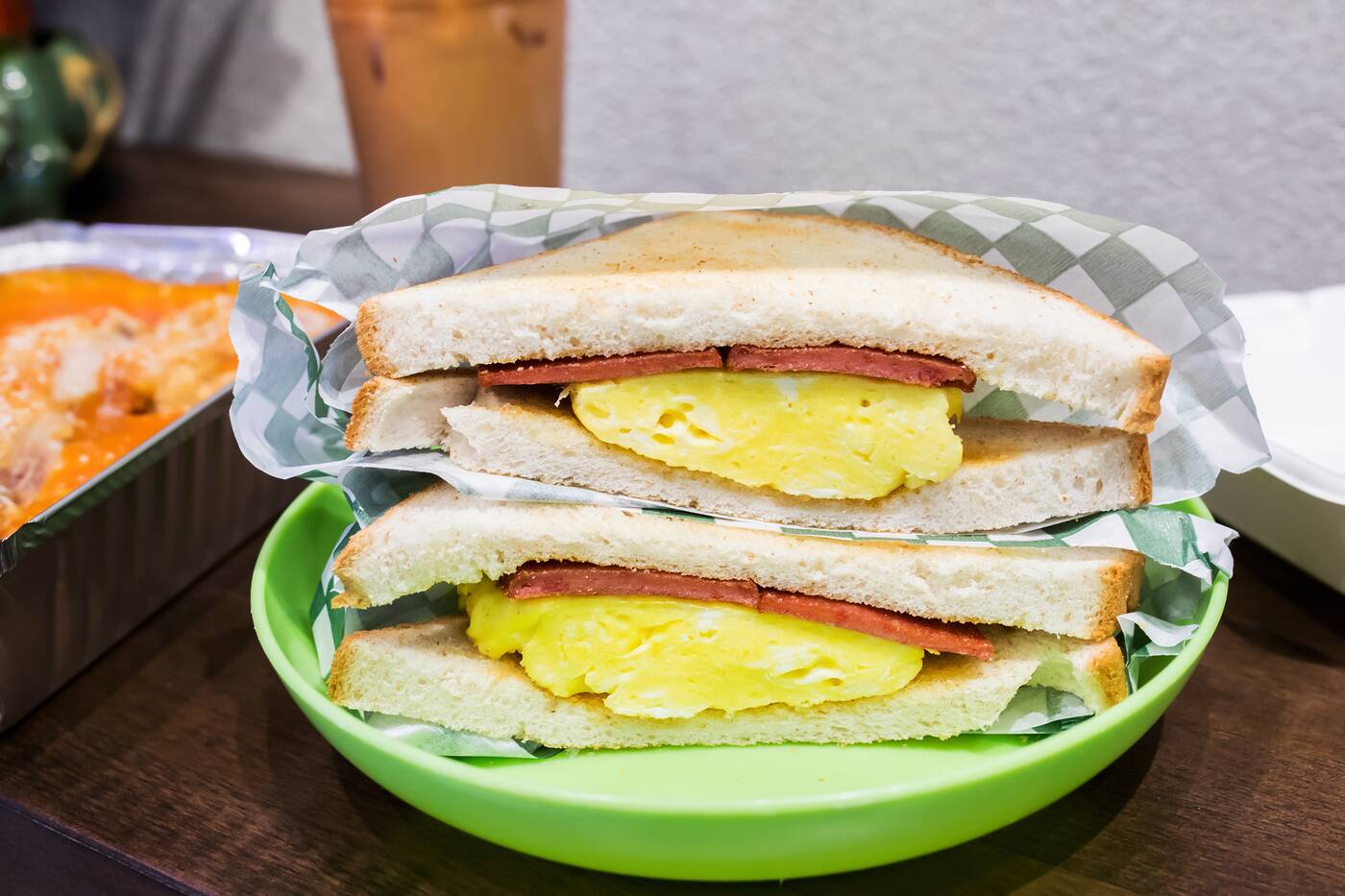 Egg sandwiches are a simple breakfast and come with the option of adding spam.

Simple breakfasts are a HK-style cafe strong suit, so their egg sandwich is a popular order. These fluffy, lightly scrambled eggs are assembled on toast with the option of adding spam for $1. 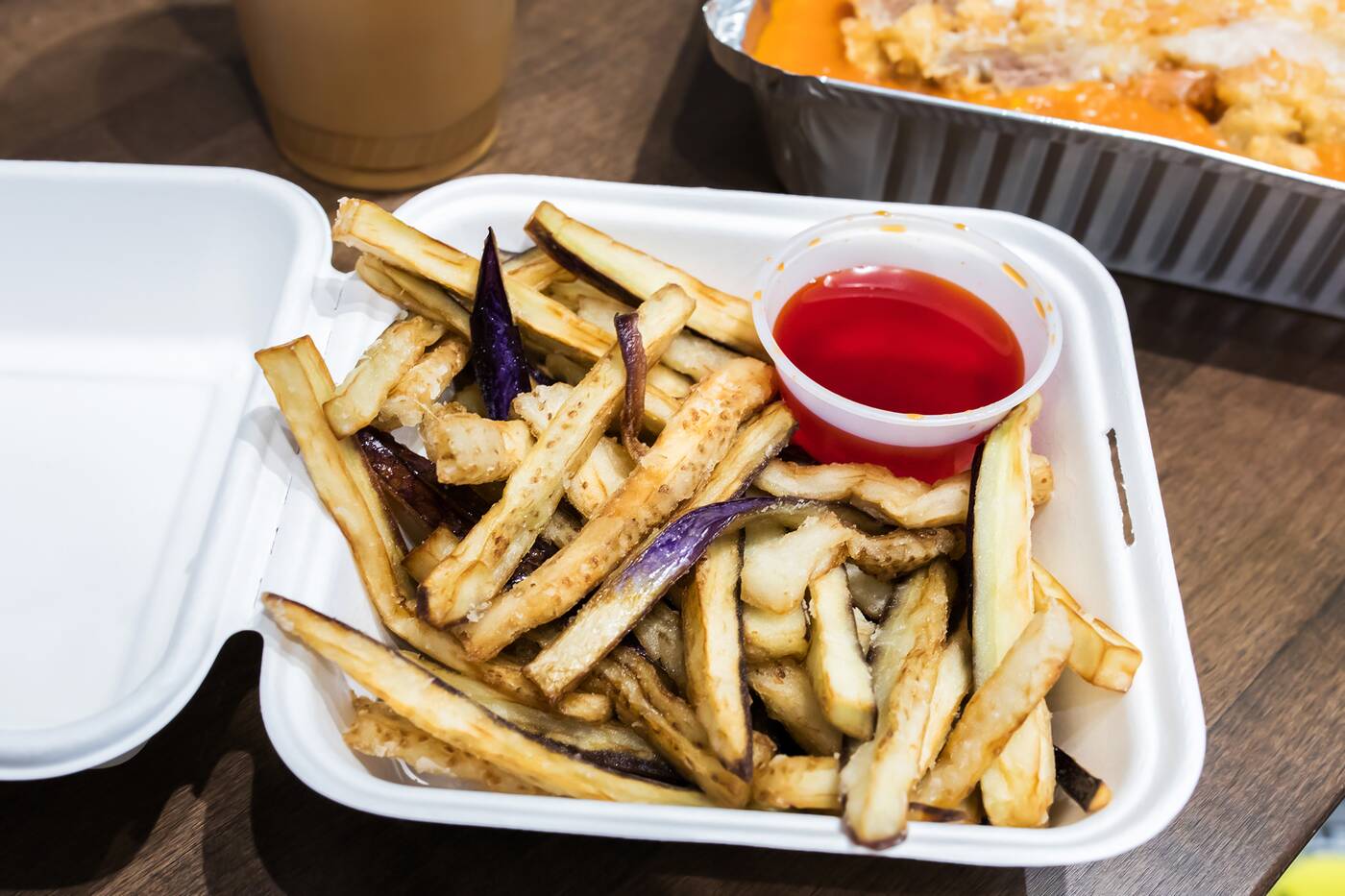 The eggplant fries are perfectly crispy.

Eggplant fries, which rarely if ever make an appearance on Chinese menus, are perfect and a great vegan option. They have their own suppliers but Lee also picks up their produce from East Chinatown. 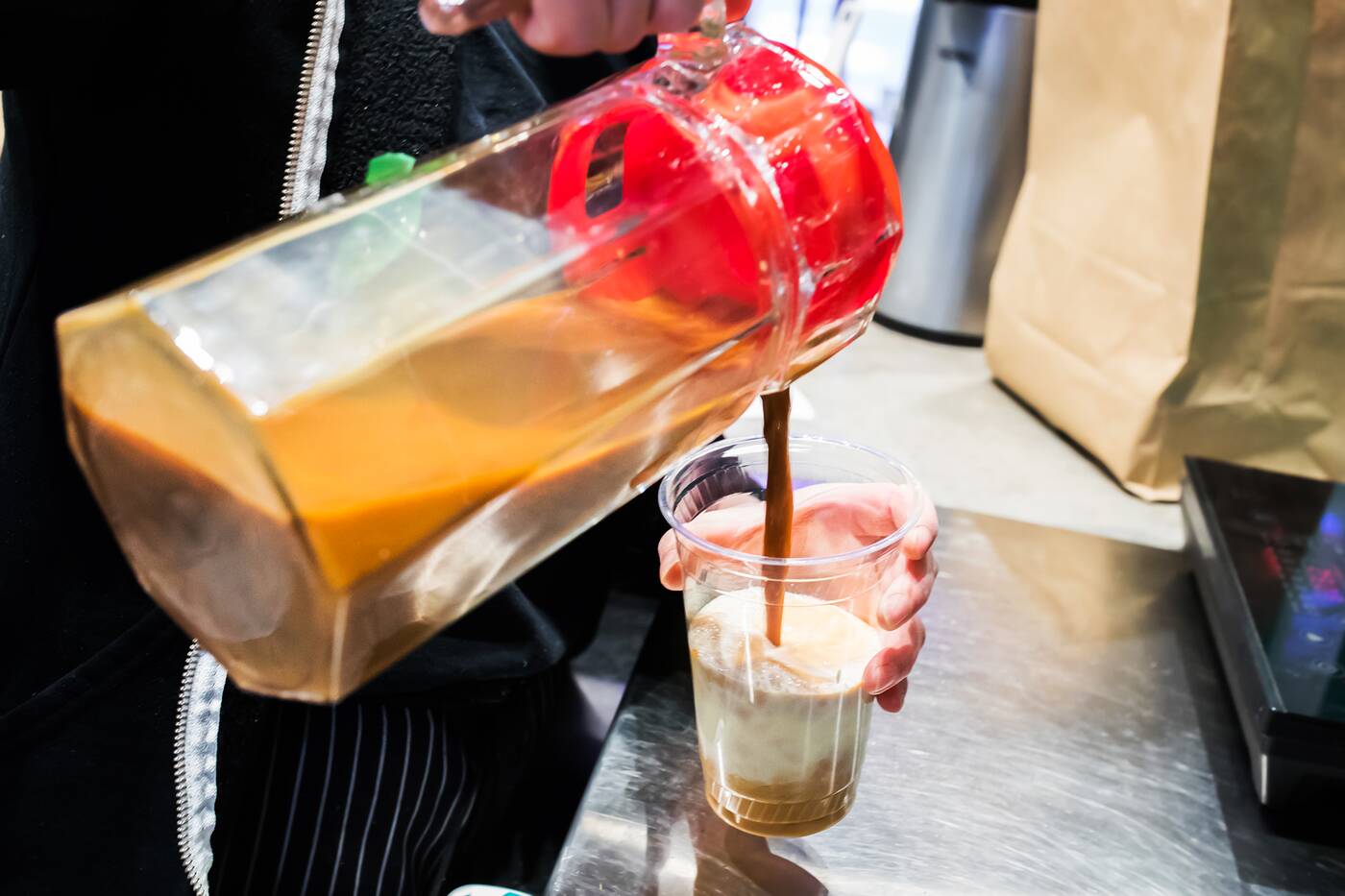 Lee makes his own tea leaf blend for their Hong Kong-style milk tea.

And then there's the Hong Kong-style milk tea: the heart of any cha chaang teng. Oh Snack!'s milk tea and yuenyeung, a mix of tea and coffee, uses leaves that Lee blends himself. 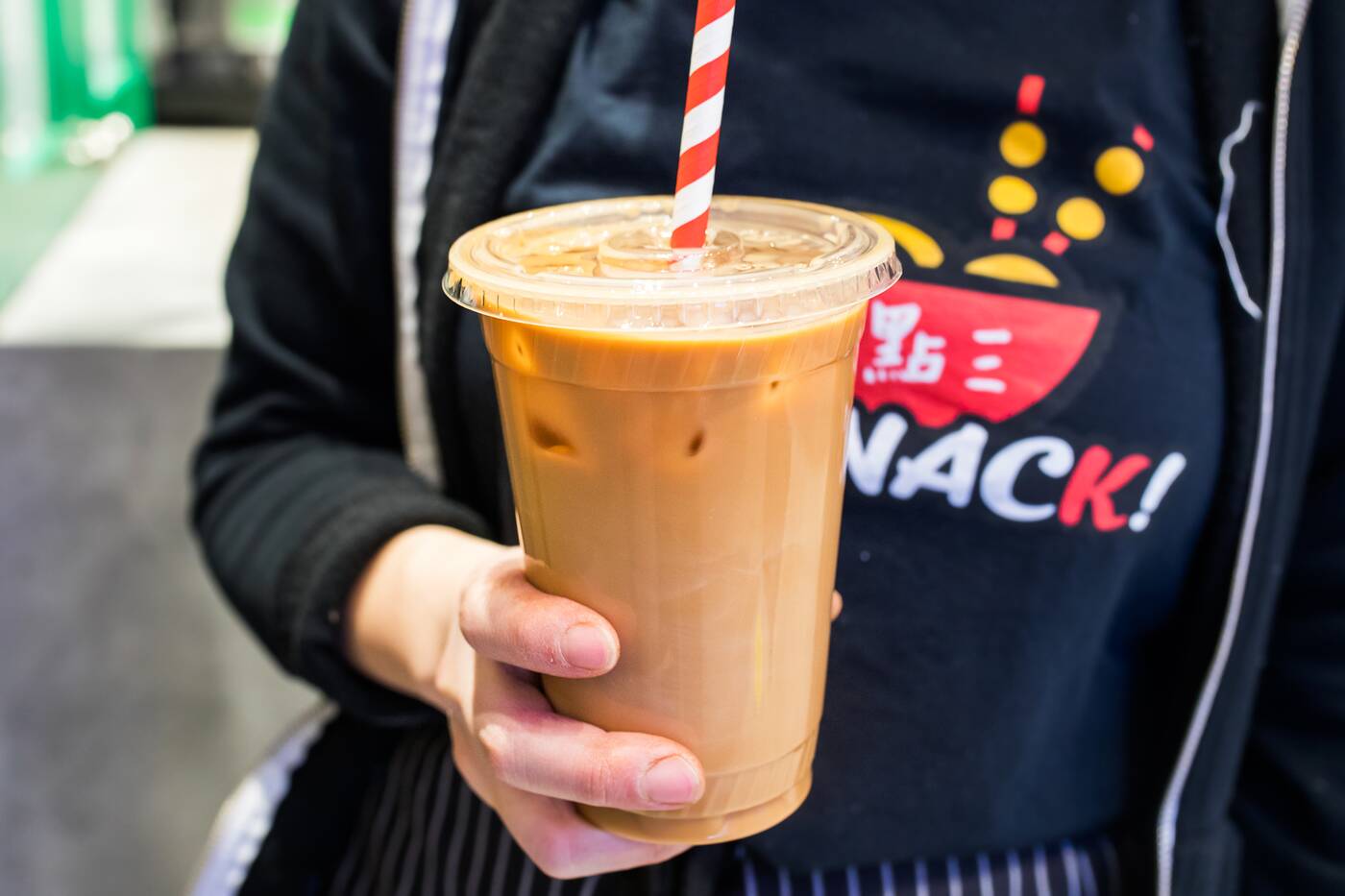 You can get milk tea hot, cold, or in the yuenyeung: a mix of tea and coffee.

The ingredients are a secret, and brewed in a traditional tea sock resulting in a potent blend to get you through the day. 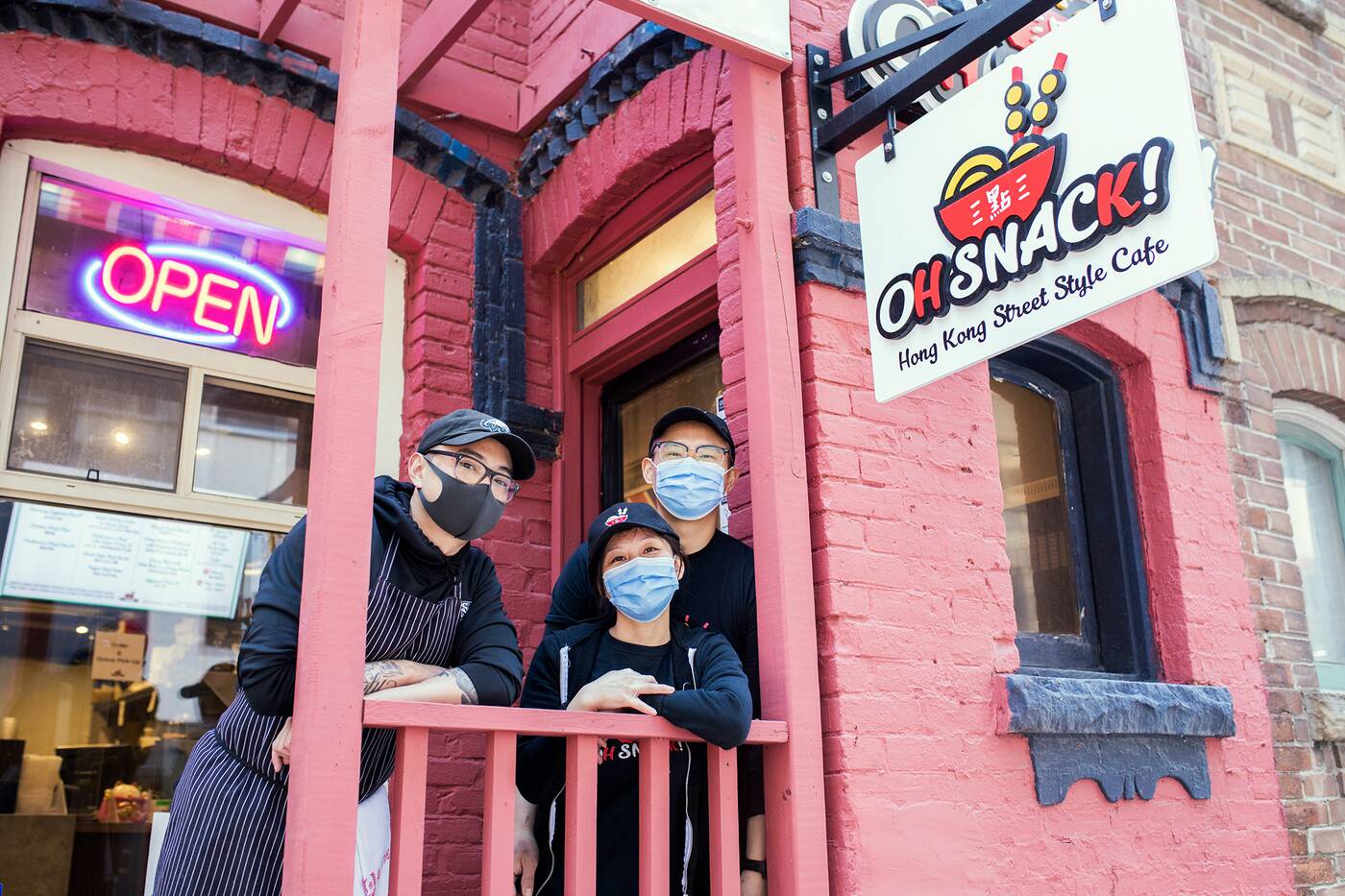