Food delivery is at an all-time high in Toronto, but the conditions in which bike couriers must deliver our food orders remain the same: stressful, unrealistic, and in some cases, terrifying.

On a regular day, it's treacherous snow-covered bike lanes or roads with no bike lanes at all.

A bad day might include verbal abuse from motorists who don't want to share the street, or getting doored while riding in the bicycle lane.

It's all part of the job, say couriers travelling Toronto's streets for delivery companies like Uber Eats, DoorDash, and Skip the Dishes.

The role, which provides an essential service under Ontario's stay-at-home order, is a flexible one. Choosing your own hours and few requirements other than background screening and proof-of-work eligibility make for attractive gig work.

But nearly a year into the pandemic, conversations around food delivery mostly revolve around app commission rates or ways to keep food from getting soggy. 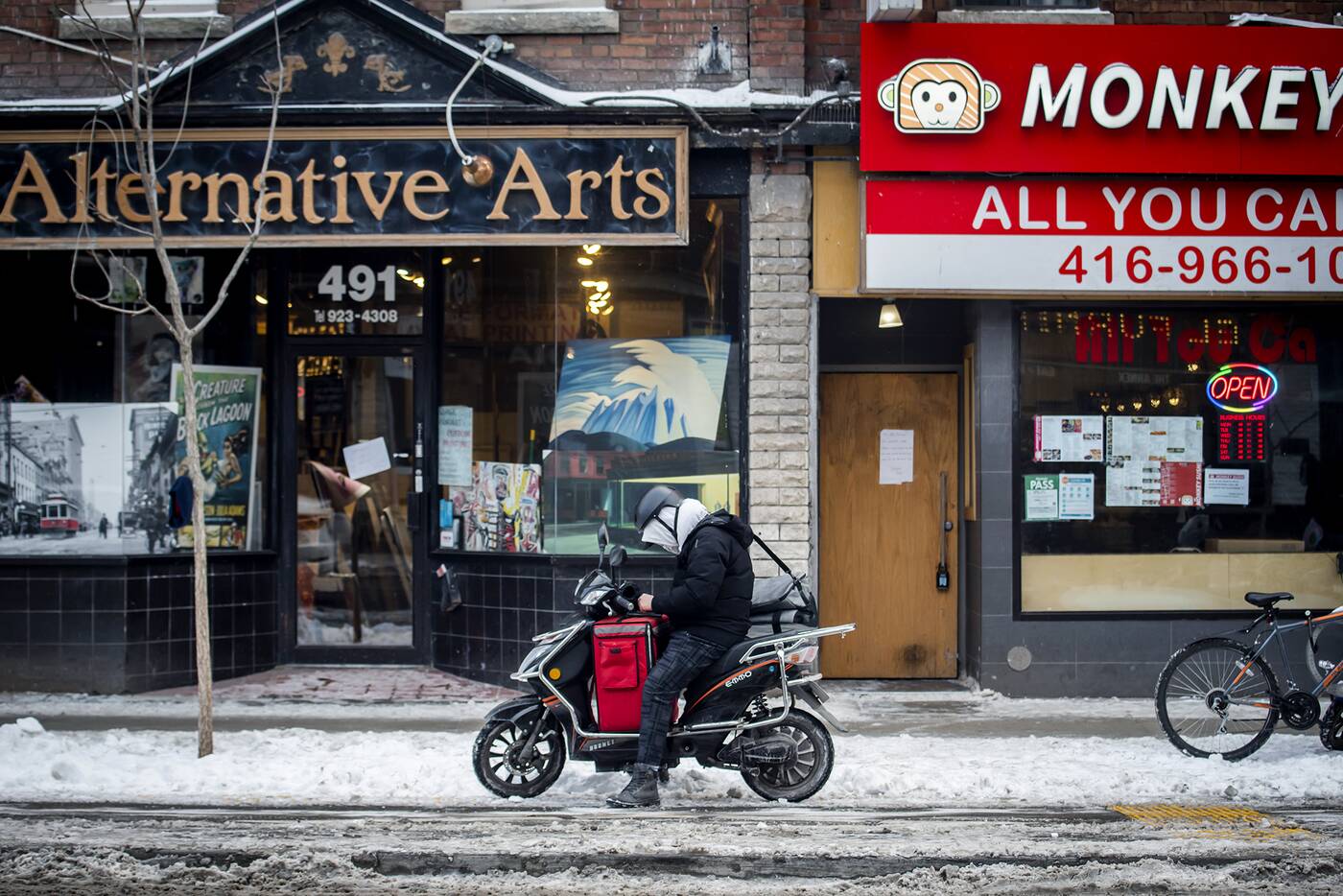 Food couriers in Toronto have to navigate the city with limited or unmaintained bike lanes.

There's a lack of road infrastructure

"Do gig workers feel supported by the infrastructure in the city? It's a big hard no," says Foodsters United organizer Jennifer Scott.

Scott, who rides both a bicycle and an e-bike, has been a food courier for nearly four years. She has worked for a number of companies including Foodora.

In 2019, Foodsters United (which will be relaunching as Gig Workers United in a few months) came together to fight for unionization. The result was a precedent-setting win for Foodora couriers and gig workers across the board. Foodora pulled out of Canada shortly after.

Scott says that the City is simply not doing enough to keep up with a quickly-expanding industry, comprised mostly of migrant workers, international students, and Canadian newcomers from racialized communities.

Despite the additions of 2020's ActiveTO lanes, Toronto is still behind on its 10-year commitment to adding 525 kilometres of new bike lanes to city streets. And Ontario has no vulnerable road user laws to date.

Major roads like Yonge or Dufferin, which she describes as "terrifying," are purposely avoided by most couriers, despite being the recommended route by their delivery apps.

That means more detours and less time to conduct deliveries, especially if working on a pedal bike.

Areas like the Annex are notoriously dangerous, say many couriers. Limited parking and pedestrians who don't check bike lanes for oncoming traffic create a free-for-all environment where injuries abound.

A road with no bike lanes often equates to motorists speeding up and swerving menacingly close around bicycles, despite the fact cyclists have a right to take up whole lanes.

It's what leads some bikers to take sidewalks instead—a move which, other than being illegal under MTO rules, can be frustrating for pedestrians.

"Road violence is different for each person, for me it’s gendered," says Scott. "For the vast majority... The violence they experience is racial."

"When we see workers make decisions like riding on the sidewalk, that is partly because the roads are unsafe. Infrastructure is not present," says Scott.

"Education within our community on how to interact with vulnerable road users is not there." 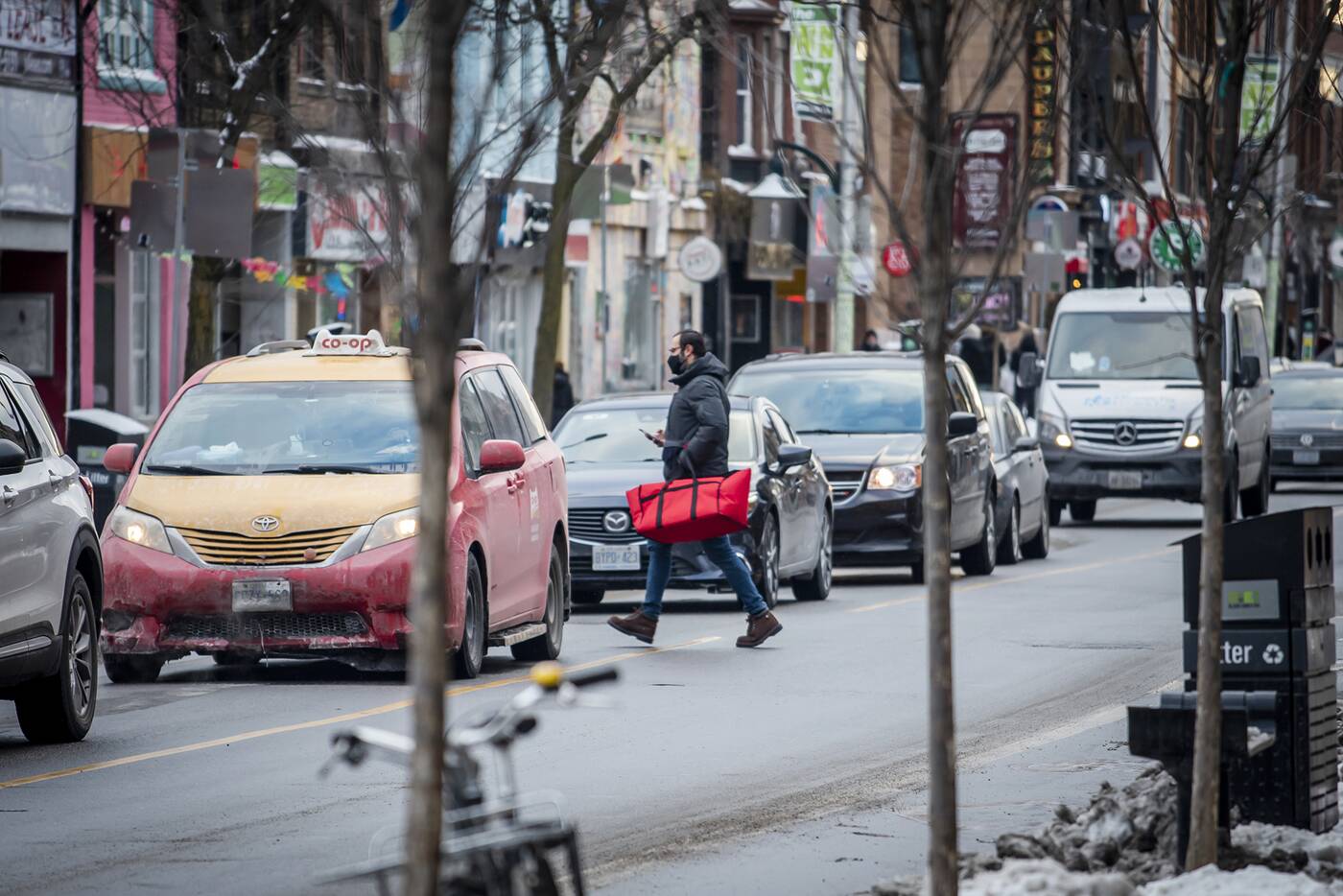 Couriers say they're not given enough safety guidance from the food delivery apps they work for.

There are no safety guidelines from delivery apps

Alok Prabhu, an e-bike food courier with UberEats, says he sometimes takes his electric bike on the sidewalk, and has been yelled at by pedestrians for it.

"Technically they're right," says Prabhu. "But it's for our safety, we'd rather go on the sidewalk than get hit by a speeding car or trucks."

Prabhu, a 32-year-old mechanical engineer who immigrated to Toronto from India last February, has been working six to seven hours daily as a courier downtown.

Like a large number of Toronto bike couriers these days, Prabhu transitioned to an e-bike about four months ago, and says it's been a game changer. He's no longer as fatigued as before and previously unrealistic delivery times have become far less stressful.

But it was a steep learning curve, he says, and one that leaves fellow couriers newer to the industry panicked while working under duress.

He's witnessed some couriers accidentally ride their bikes onto the Gardiner Expressway or the DVP. Due to UberEats' poor Google Maps integration, couriers aren't allowed to toggle from vehicle routes to routes best suited for bikes.

In a statement to blogTO regarding their app and lacking safety training, Uber Eats said:

"Uber is committed to road safety and we are continuing to build products and raise awareness about practices that can lead to safer streets for all — regardless of the mode of travel. We are constantly evaluating our processes and always striving to improve the app as our tech evolves.”

Aside from COVID-19 tips, bike couriers are not briefed by their employers about City-specific bike lane rules or what kind of safety equipment to buy.

Nor are cyclists directed to the Ministry of Transportation's resources or CycleTO's Cycling Handbook, which is available in 13 languages.

"It's experience," says Prabhu. "Basically I know the shortcuts and what routes to take, rather than following the map."

"That's not the stressful point for me, but I'm not sure about the newcomers. They get lost in the city, they don't know the roads." 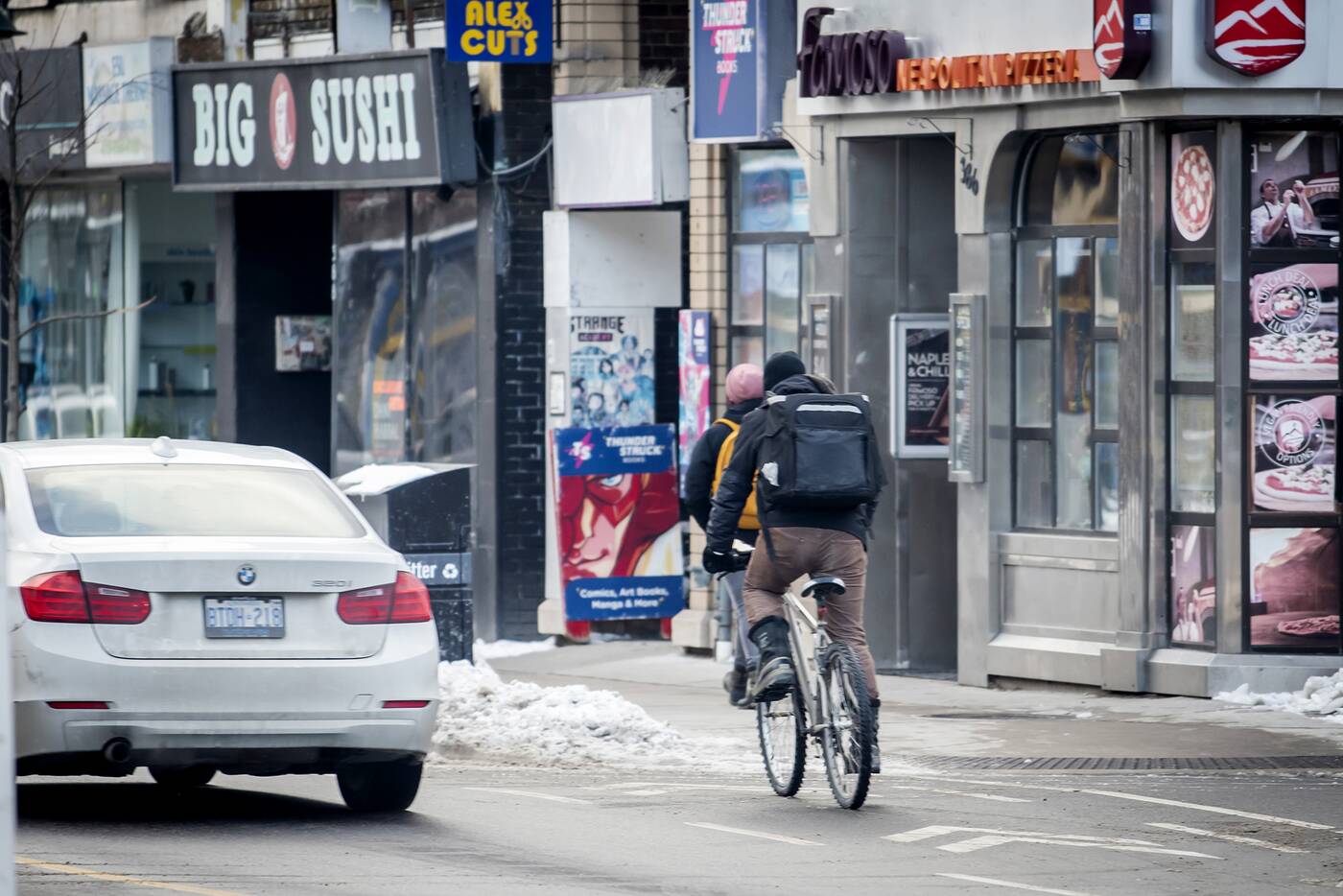 The conversation around food delivery has largely failed to address the safety needs of food couriers.

It's an underregulated industry

Phil Cacace took up food delivery for UberEats and DoorDash for a couple of months this past summer.

The owner of Tallboys and Wenona Lodge, which were forced to close their indoor dining areas during lockdown, says he spent upward of $200 on safety equipment for the gig, including a phone holder, rain gear, and high-viz accessories like headbands and jackets.

As a restaurant owner who's now seen both sides of the delivery industry, Cacace's main take away is that delivery apps don't care about courier safety nor food quality.

"[Food delivery apps] don't provide you with a hot bag," he says.

"There's no way you would invest between $60 to $200 to set up to be prepared with the minimum requirement so that food is delivered in a way that it's still hot," he says.

"I think that the industry is massively underregulated and getting away without any responsibility for their employees is a slippery slope," he says.

In a statement to blogTO, DoorDash said that it tries to "only offer deliveries that are bike friendly to Dashers who have indicated they deliver by bike."

That means orders including "cumbersome items like cakes or multiple hot drinks" are passed over to couriers in cars instead. Bike couriers are always free to decline orders, too, said DoorDash.

SkipTheDishes said in a statement, "While the significant majority of deliveries on our network are completed by car, we always encourage couriers to prioritize their safety while making deliveries on the Skip network."

Before you complain about how hot (or soggy) your food is, or how quickly (or not) the order arrived, consider that your courier has had to navigate some stressful, and potentially fatal, conditions to deliver your food, says Scott.

If you witness a collision between a courier and a motorist, consider stepping in to give solidarity. Give ample space to cyclists when you're driving around them. And try your best to temper your anger about bikes on the sidewalks, frustrating as it can be.

"I think in general, support and sympathy [is low for] couriers, people that work in conditions that are low-paid and stressful," says Scott. "They're essential workers who don't get paid enough... But that person is doing their best."