Dome dining in Toronto is the latest trend with domes popping up on restaurant patios around the city. But unfortunately for businesses, they're not technically allowed.

Not yet, anyway. Eating inside an enclosed bubble currently classifies as indoor dining, meaning dining domes are technically banned in Toronto under Stage 2 of Ontario's reopening plan.

Premier Doug Ford has stated that he's moving the issue of dining domes along. They're all but approved, said Ford last week, but there's been no word about the status of these plastic domes since then. 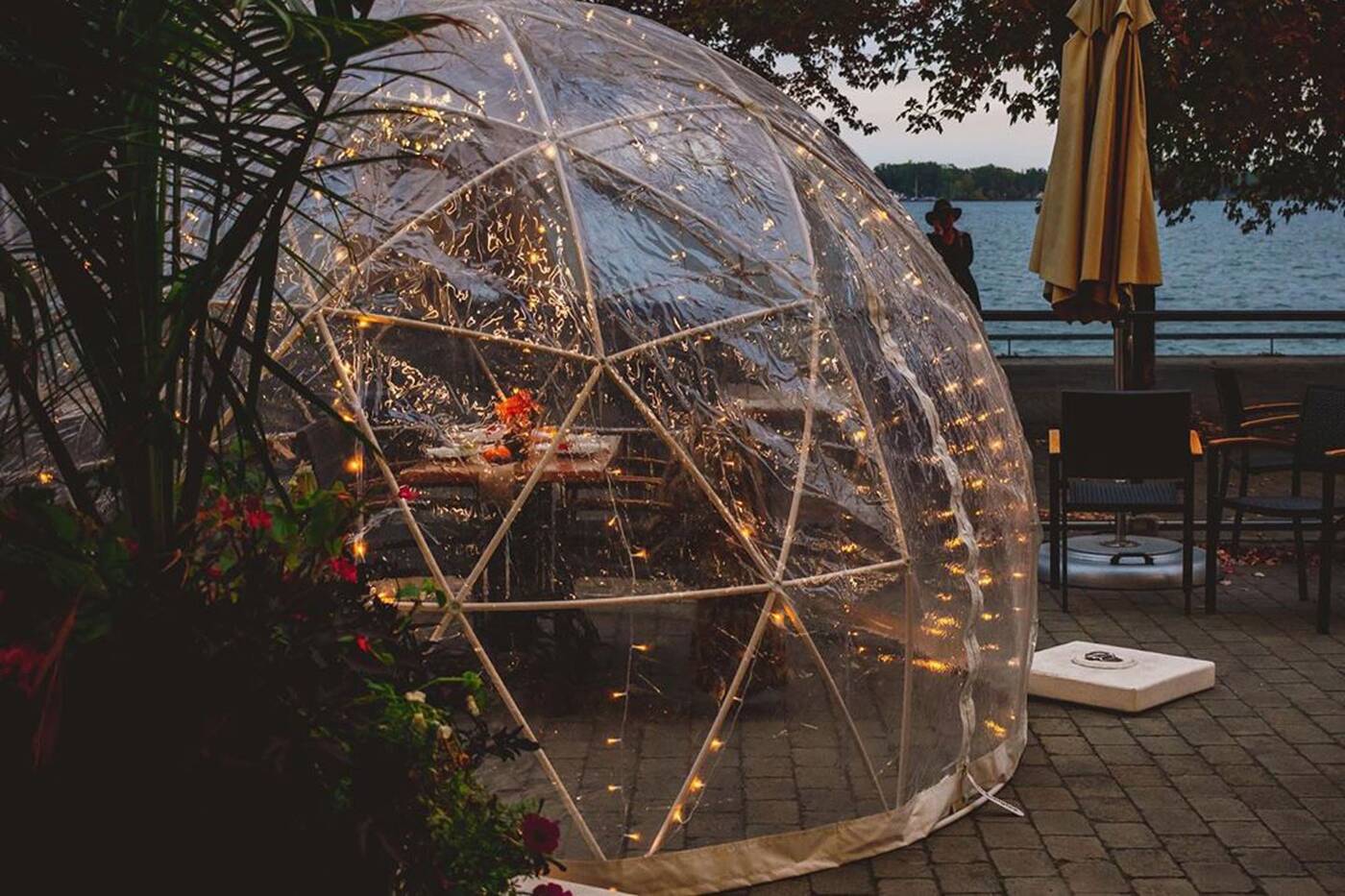 As result, businesses who rushed to purchase and assemble these winterized bubbles have been left in limbo as the province stalls on its final decision.

The Intercontinental Yorkville has had to postpone their dining dome experience at Proof Bar until mid-November in hopes that Stage 2 will be over by then.

Lakeshore restaurant Against The Grain set up their domes at the beginning of October, hoping to launch their Bubble Dining By The Lake experience to make up for the closure of indoor seating.

Reservations were all booked up for the weekend until the city and provincial health officials told them that regulations around dome dining are still in the works.

The restaurant has had to postpone its bubble dining until the team gets a go-ahead from both levels of government. The timing of that announcement is still unknown.

"I think this is an extremely difficult and confusing time for everyone," said Cam Parra, director of marketing for FAB Restaurant Concepts, which owns Against The Grain.

"Over the last week, we have had numerous inspections including one from the province – who found no issues with our Bubbles. The City of Toronto has been a bit more confusing in their direction. "

Parra says the restaurant's domes, which each have two air vents and one large opening, offer enough ventilation for parties dining together in the same social circles.

But they've received conflicting information from multiple inspectors, says Perra, with one giving the green light, while another Toronto Public Health representative saying that their structures required an extra door. 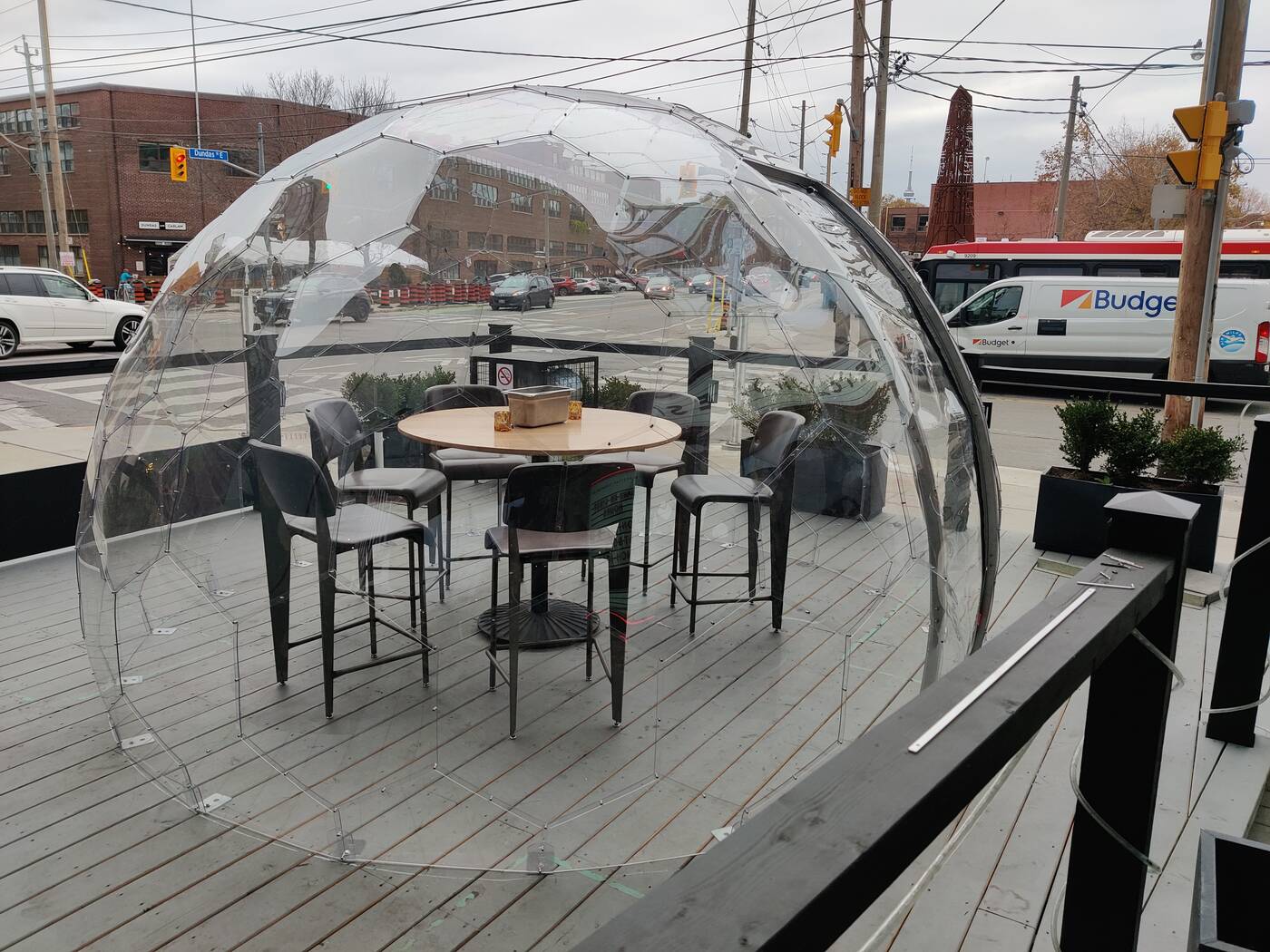 Restaurant Gare de l'Est has its dining dome all set up but is waiting on the province to give the green light. Photo courtesy of Erik Joyal.

Gare de l'Est has recently acquired ventilated dining domes manufactured in Poland. Compared to other structures owner Eric Joyal has seen, he feels dome dining is one of the more realistic options for outdoor dining in the city.

"It's 3 C right now," says Joyal. "Nobody's going out on a patio unless it's protected in some way. There are zero options."

He plans on launching the domes this weekend. But if the provincial government announces that dome dining is nixed, it'll mean a lot of wasted time and money.

"I am anxiously awaiting some definitive guidelines from the city," says Joyal. "I'm sort of surprised they've been slow on this and they didn't see this coming."

If you've ever experienced a dining dome, you'll know there's something distinctly hamster-like about eating inside a plastic bubble.

But whether dome dining is for you or not, it's been interesting to see how these structures have evolved from last year's most gimmicky experience into a viable business solution that could potentially help keep restaurants afloat this winter season.

"Realistically, it's one of the very few tools restaurant owners will be able to use to expand their patios in a safer manner than what is currently being used on patios," says Adam Panov, a 28-year-old from Thornhill who just launched his company SnowPods.

Manufactured in the U.S. from PVC plastic tarps and tubes, Panov's dining domes, or SnowPods, measure about 2.1 metres high: more than enough room to stand up comfortably in the centre, unless you're taller than 6 foot 8 inches.

They span just wide enough for a table of up to six people. According to the website, they're designed to withstand temperatures as low as -20 C, up to 70 pounds of snow, and wind gusts of up to 60 kilometres per hour.

SnowPods don't come with heaters, meaning owners will have to buy one 1,500-watt indoor space heaters per pod. Ventilation is provided through the zip-up door and two retractable windows on the roof and back of the pod.

"What it does is it tackles the issue of keeping people warm while isolating people to their structure at the same time," says Panov.

While that all sounds well and good — Panov says the company is already working toward supplying a few hundred orders outside of Toronto — but movement has stalled as the government looks into amendments for dome dining.

"The key here is time, there's an extraordinary time crunch," says Panov. "As we inch closer and closer to December, this only gets more crucial."