Toronto has a problem with imitation Chinese restaurant chains

Toronto is an absolute honeypot for international brands, and none more than the mega food chains hailing from China.

Over the past few years, the staggering number of massive Chinese chains making their first foray into the city have quickly transformed the landscape of Toronto's restaurant scene.

From noodle shops like Dagu and Hey Noodles, dessert purveyors like Smile Dessert , or popular dinner spots like the quickly-expanding Huangzhou-based restaurant Green Tea, these newcomers with hundreds of locations worldwide have turned Toronto into a capital of firsts.

But unless you're intimately familiar with China's food industry, chances are you've never heard of these chains before their highly-publicized arrivals in Chinatown, Markham, or the areas around Silver Star Boulevard.

So what happens when these Toronto locations are actually fraudulent? Unaccounted rip offs of the very brands they claim to represent?

Since February 2018, one restaurant has been operating out of Bridlewood Mall under the name Hutaoli Music Restaurant & Bar: a popular chain with over 400 locations in China.

This jazzy Bridlewood restaurant comes with leafy greens hanging from the ceiling, a stage for nightly live music performaces, and signage that identically replicates other locations of its namesake brand worldwide.

But according to a WeChat article that's been circulating in Toronto's Chinese community, convincing as the branding may be, the store is actually an imitation franchise that's totally unaffiliated with the actual chain.

In fact, Toronto's first real Hutaoli is only soft opening in Markham at 3760 Highway 7 East this month—something that its owners have been quick to clarify. 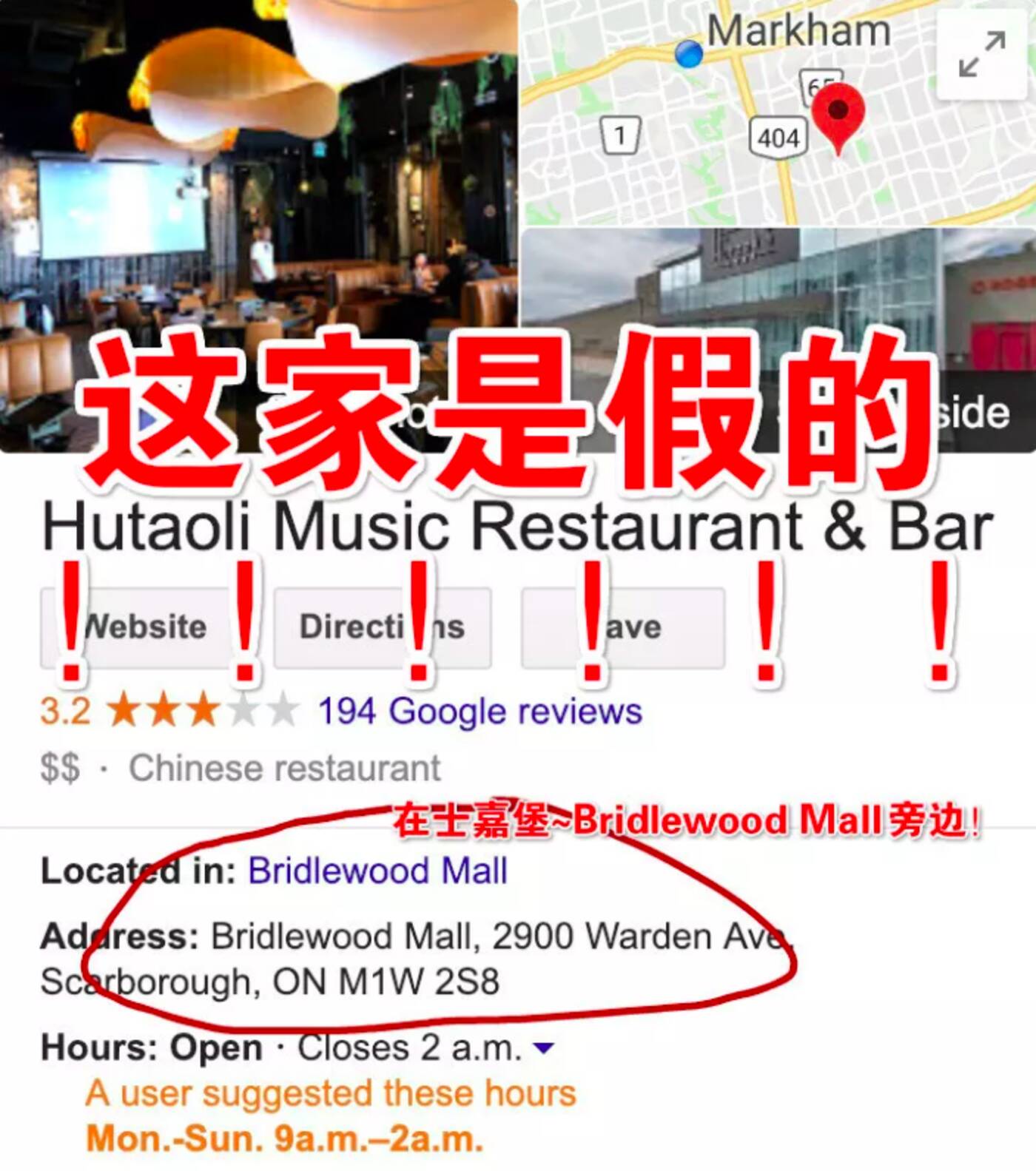 A thread on Chinese social media app WeChat provides proof that Hutaoli in Bridlewood Mall is an unathorized franchise of the original restaurant chain from China. Photo via WeChat.

To discredit their copycat in Bridlewood Mall, the official Shenzhen-based Hutaoli corporation issued a statement on Jan. 21, 2019 solidifying the validity of the new Markham restaurant as "the only legal franchise in Toronto, Canada."

Aside from issuing the certificate, the chain has yet to take legal action.

According to an affiliated source working with Hutaoli, who requested not to be named, there are no plans to do so anytime soon: brand trademarking and copyrighting done in China evidently wasn't registered far enough ahead of time to apply in Canada.

At this point, it's up to customers to decide which 'Hutaoli' they go to, which begs the question: how do people differentiate between the real and the imitation, and if they're offering near-identical services, should they care at all?

"This is a very messy thing," says Zhe Kuang He, project manager with Sweven Media, a public relations firm with clients that mostly consist of major Asian chains like Dagu and Gogo Chicken Pot.

Zhe says that those who care to make the distinction can call brand headquarters in China (though non-Mandarin speakers will likely find that challenging), or check online to see if they've updated their list of locations. 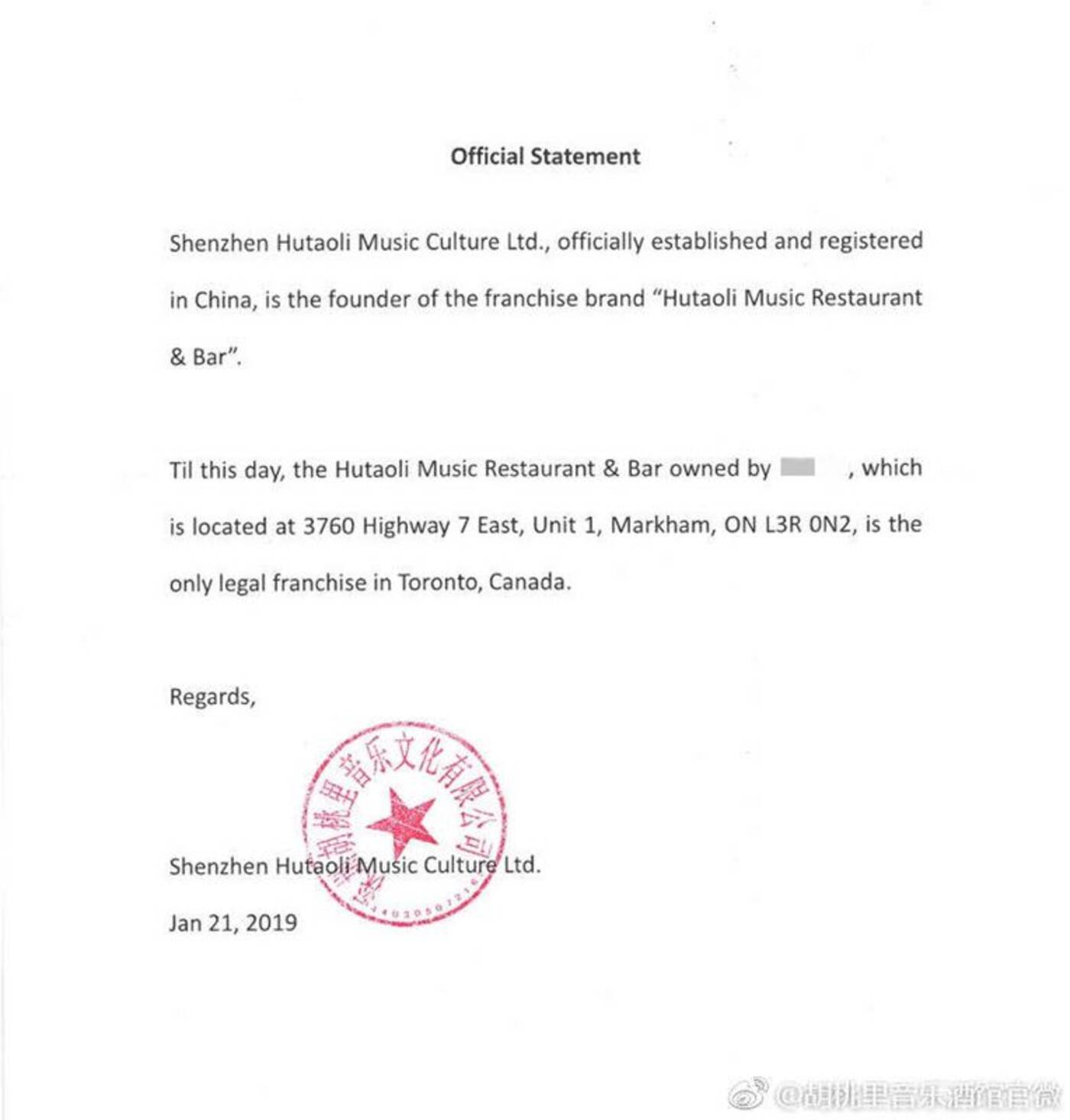 The official Hutaoli brand issued a statement certifying the new location in Markham is the chain's only legal franchise in Toronto.

"From overseas it's very hard to tell," he says, "But a lot of bubble tea brands don't want to come to North America and will say that on their website."

While there are rumours among the Chinese community about other fake franchises running successful operations in the city, none have been confirmed by statements from chain headquarters.

The only copycat chain that can be clearly pointed to is the longtime Ding Tai Fung in First Markham Place, whose name and signage font run dangerously close to the famous Taiwan soup dumpling chain, Din Tai Fung.

It's by no means an exact replica, but the similarities are too close to be unintentional. In fact, the imitation is so blatant, the busy restaurant has been embraced by the Chinese community, becoming a certified staple in lieu of a real Din Tai Fung.

Given the huge number of new international names flooding the city, it's hard to keep up with the legitimacy of certain franchises, but it's especially difficult when the actual relationships with original brands can—both literally and figurately—easily get lost in translation.