The Stop Community Food Centre started out as one of Canada’s first food banks over 35 years ago, and now they’re throwing some of Toronto’s most popular food parties.

This includes The Stop’s Night Market, which kicked off last night and continues today with some of the best food vendors in the city, like Enoteca Sociale, Richmond Station, Patois, Oyster Boy, and Tori’s Bakeshop. 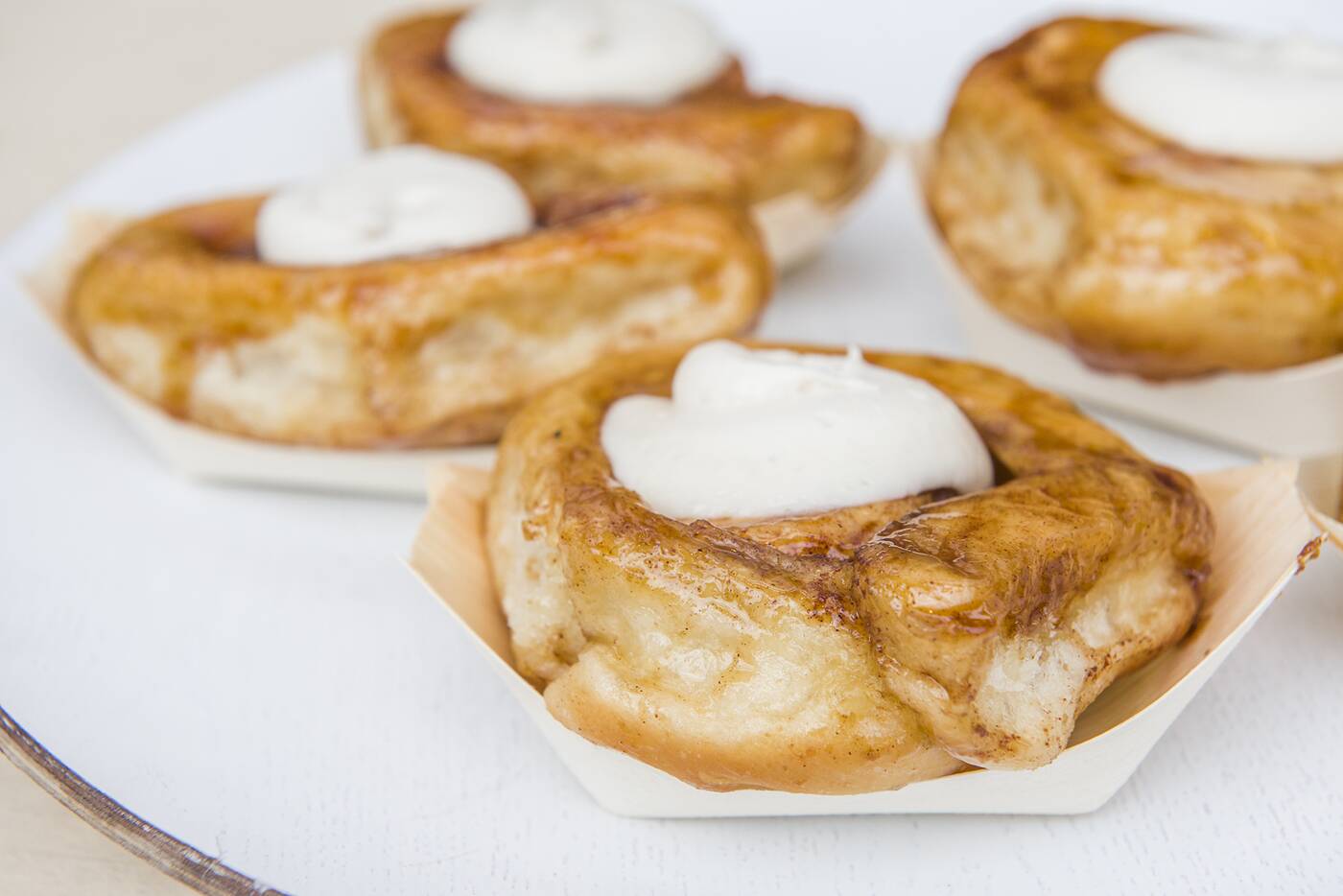 It’s thanks to these loyal restaurant partner that the Night Market continues to raise massive funds for The Stop, which has expanded over time to running not only a food bank, but dozens of programs including drop-in meals, community kitchens, urban agriculture, and youth projects. 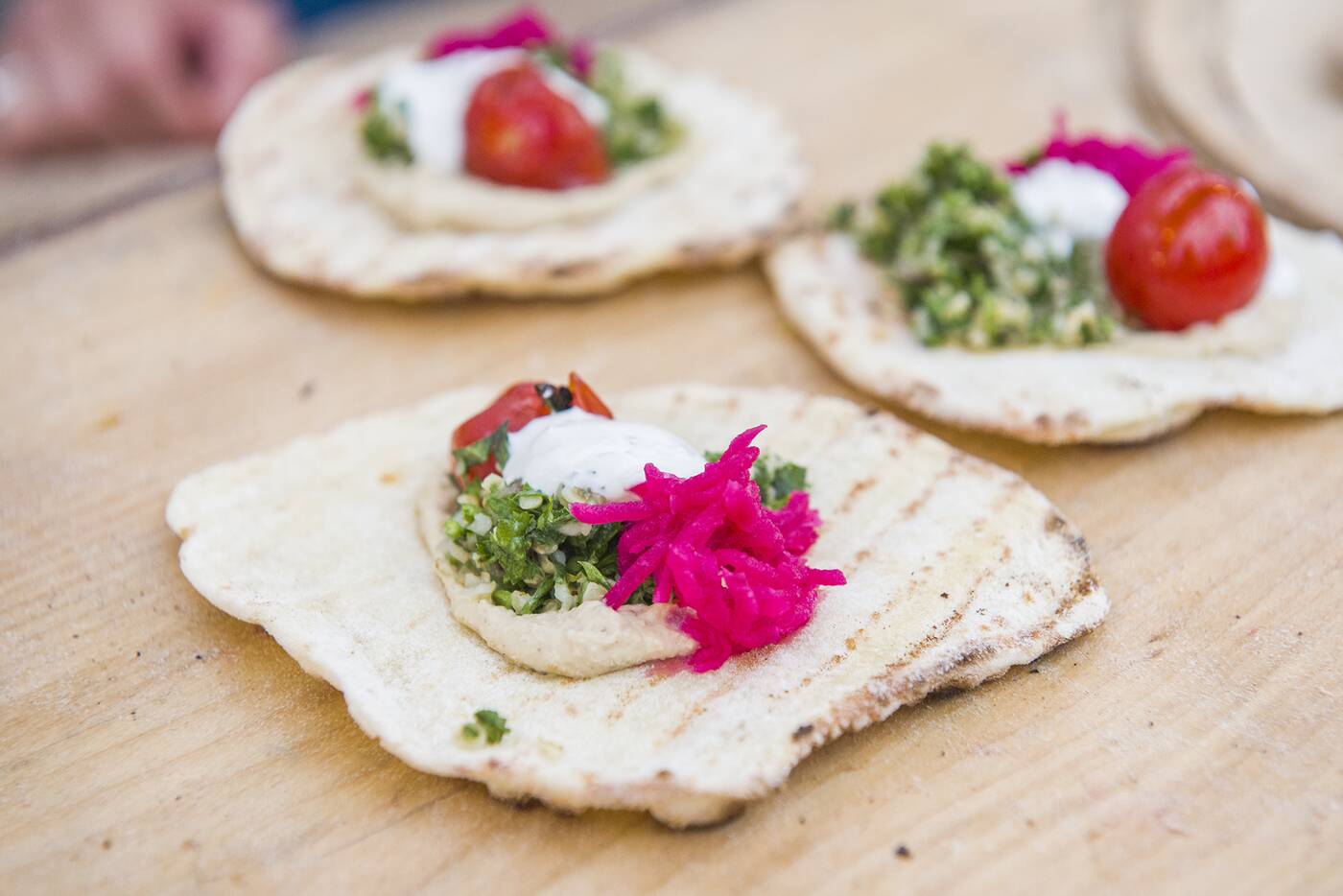 Nick Chen-Yin of Smoke Signals BBQ, who sold out of his 1000 jerk and bama wings in just an hour, says it’s all about when “one chef that everyone gets behind gets behind something.” 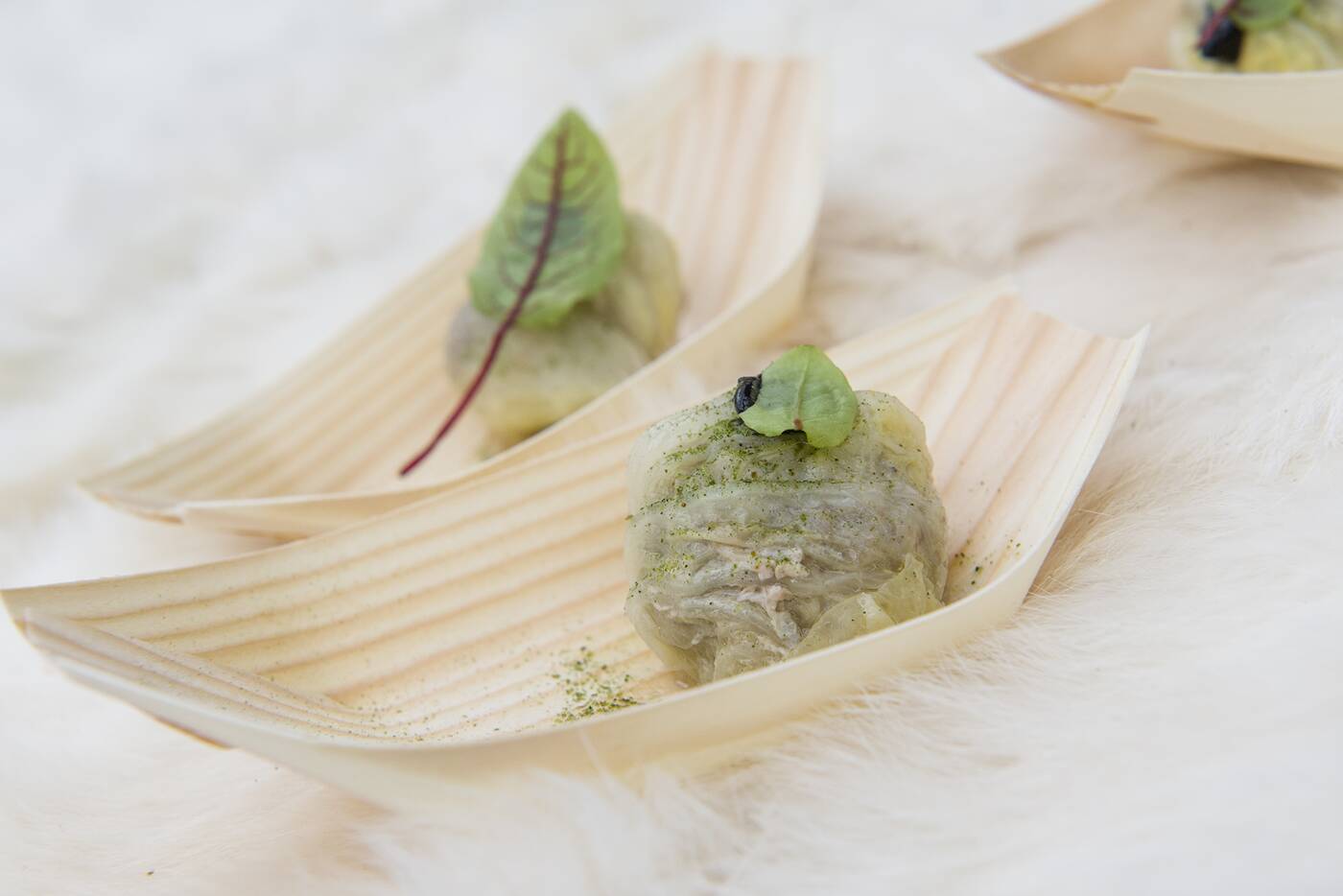 Pork and shrimp dumpling from Boralia.

When he started out at the Night Market years ago, before Smoke Signals had a brick and mortar (the opening of which is largely thanks to participation here), he’d ensure he got a booth next to friend Jonathan Poon of Bar Fancy, who used to do the event. 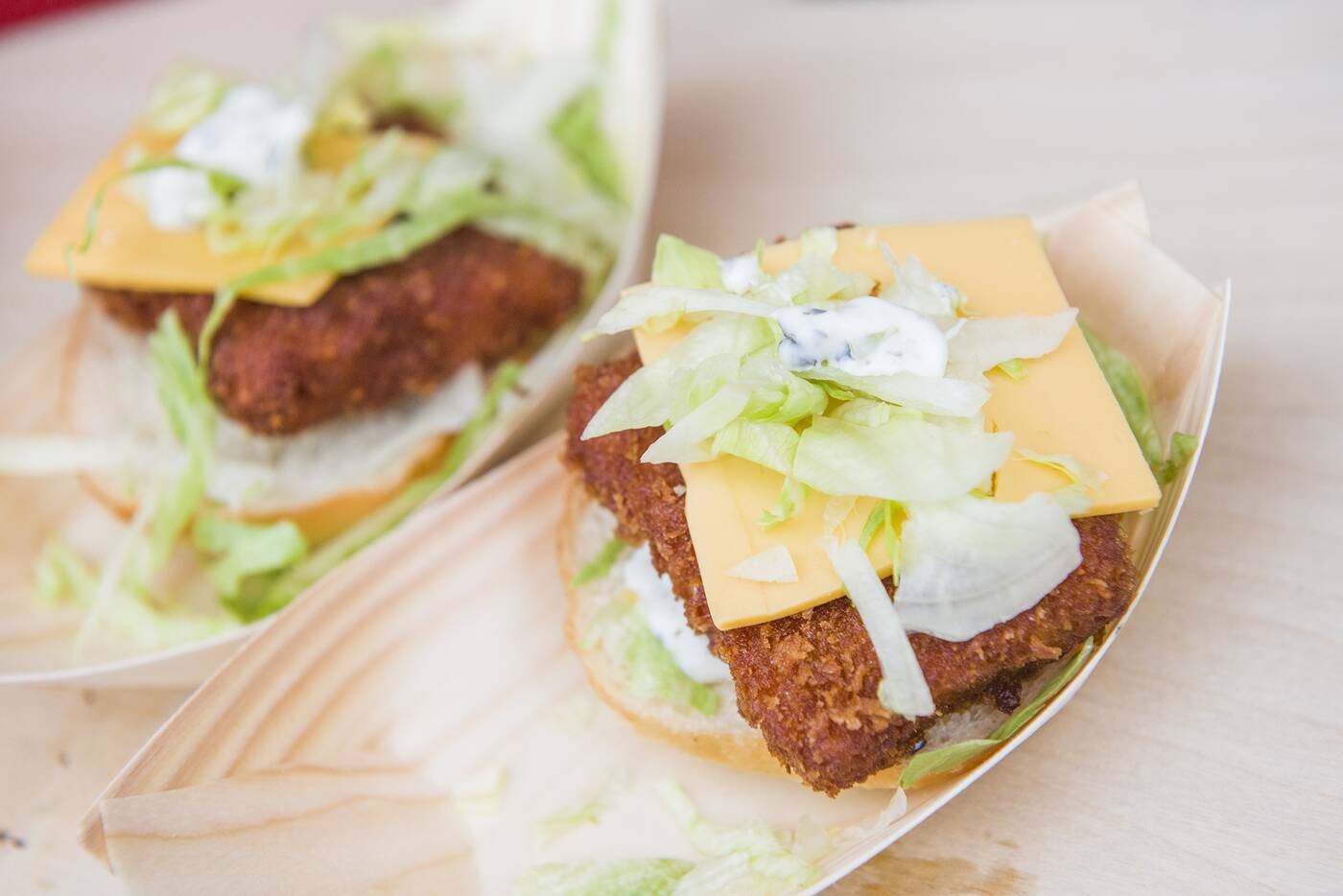 Poon and Chen-Yin then convinced Craig Wong of Patois to join the party, and he’s been hooked ever since. He ambles over when he sells out of his shrimp burgers not long after Chen-Yin’s wings. 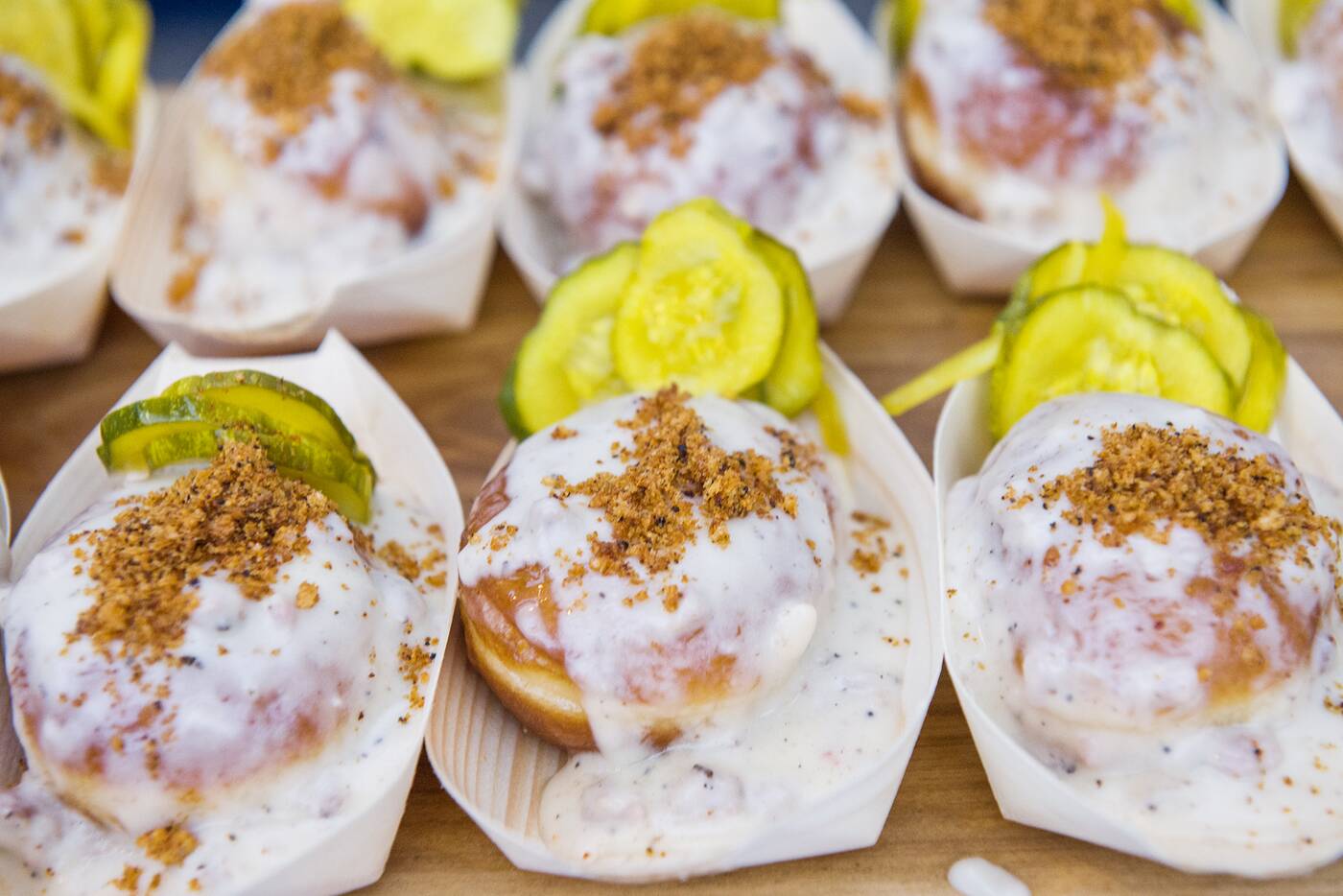 “It’s one of my favourite events of the year,” he says. “They genuinely are grateful that you’re taking part. We’re donating our time, paying staff to be here.” He feels you’d be hard pressed to come up with many other professions where people would be willing to do that. 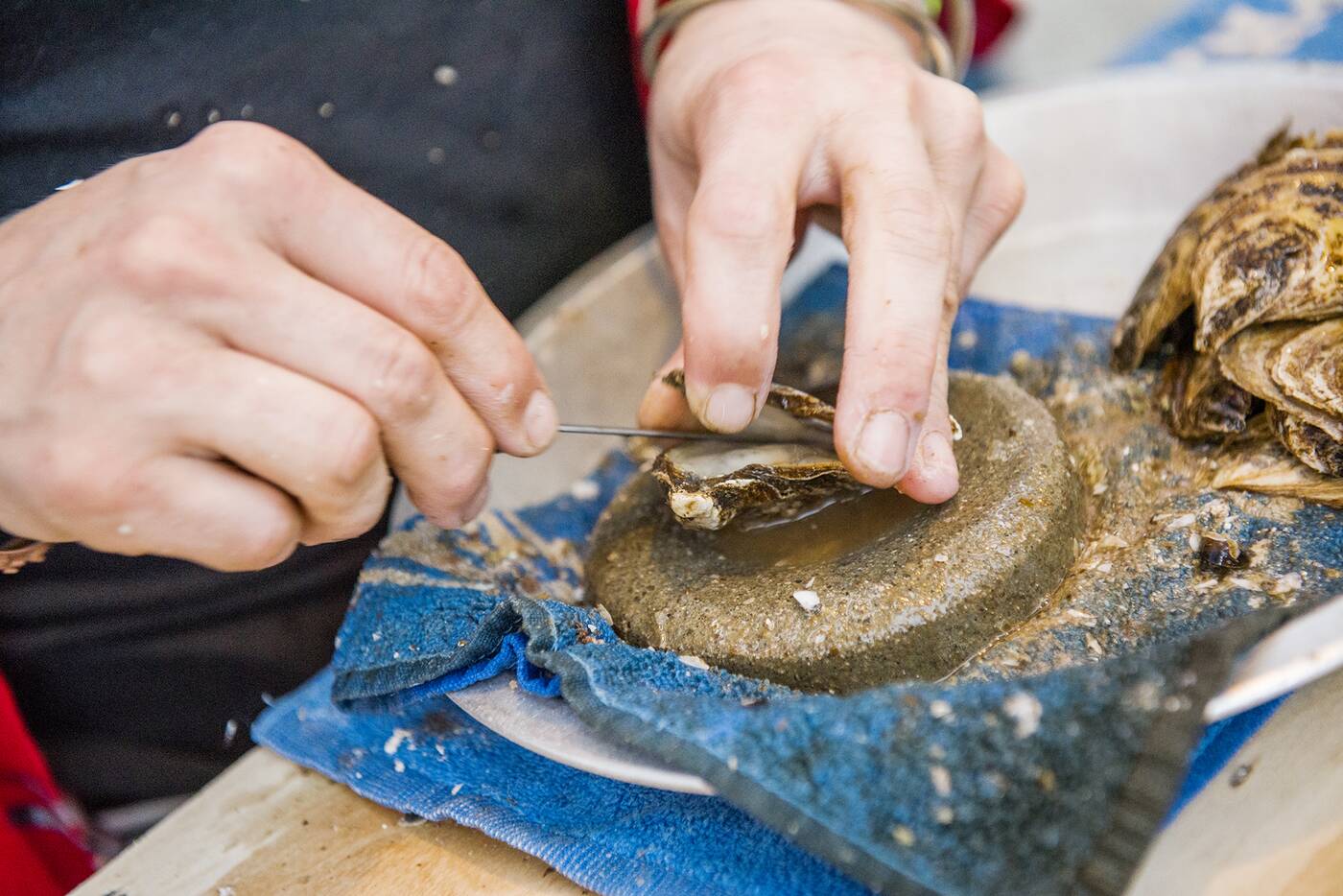 Shucking at the Oyster Boy booth.

The Night Market now takes place in a dusty lot that gets strung with twinkly lights on Sterling Road. When it started out, it was in the parking lot of the now-demolished Honest Ed’s. 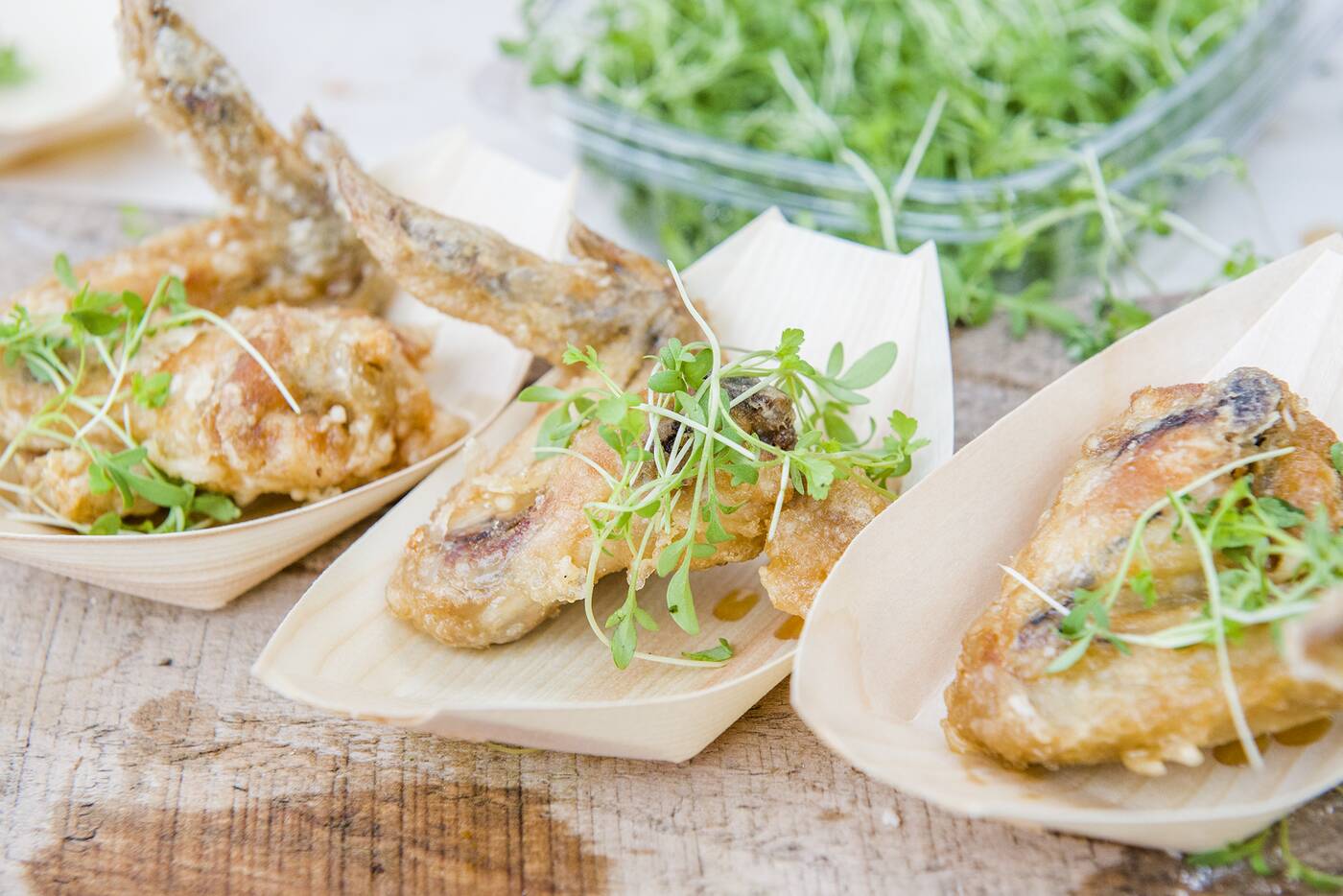 “We outgrew Honest Ed’s,” admits Stop Assistant Chef Monica Bettson, but adds that the crowding combined with the shutdown influenced the move. 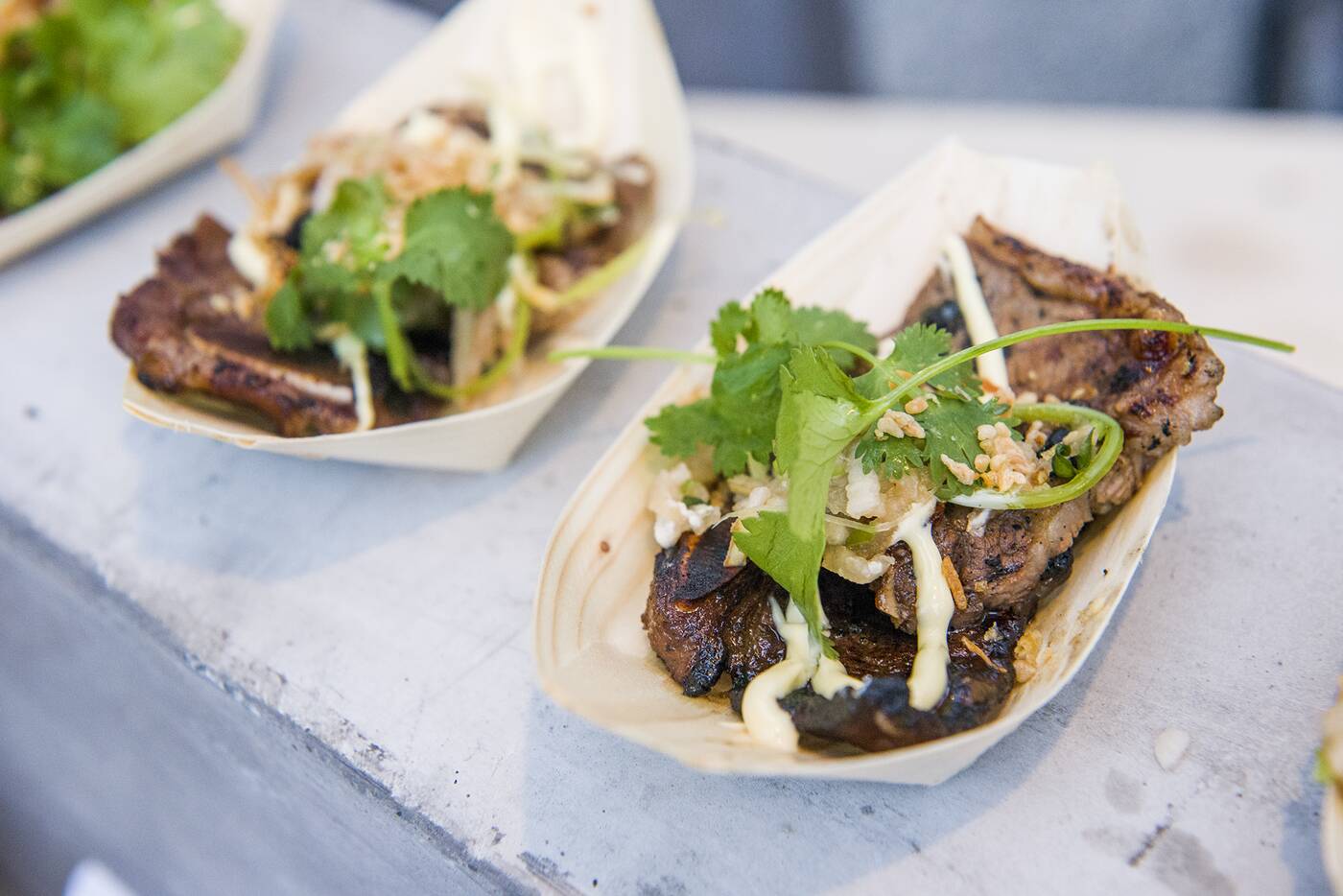 They’re now able to host more vendors (all of which are provided access to free grilling equipment and Ace Bakery bread), and over the years ticket prices have doubled from $50 to $100 for all you can eat and drink, which means double the funds raised for the Community Food Centre. 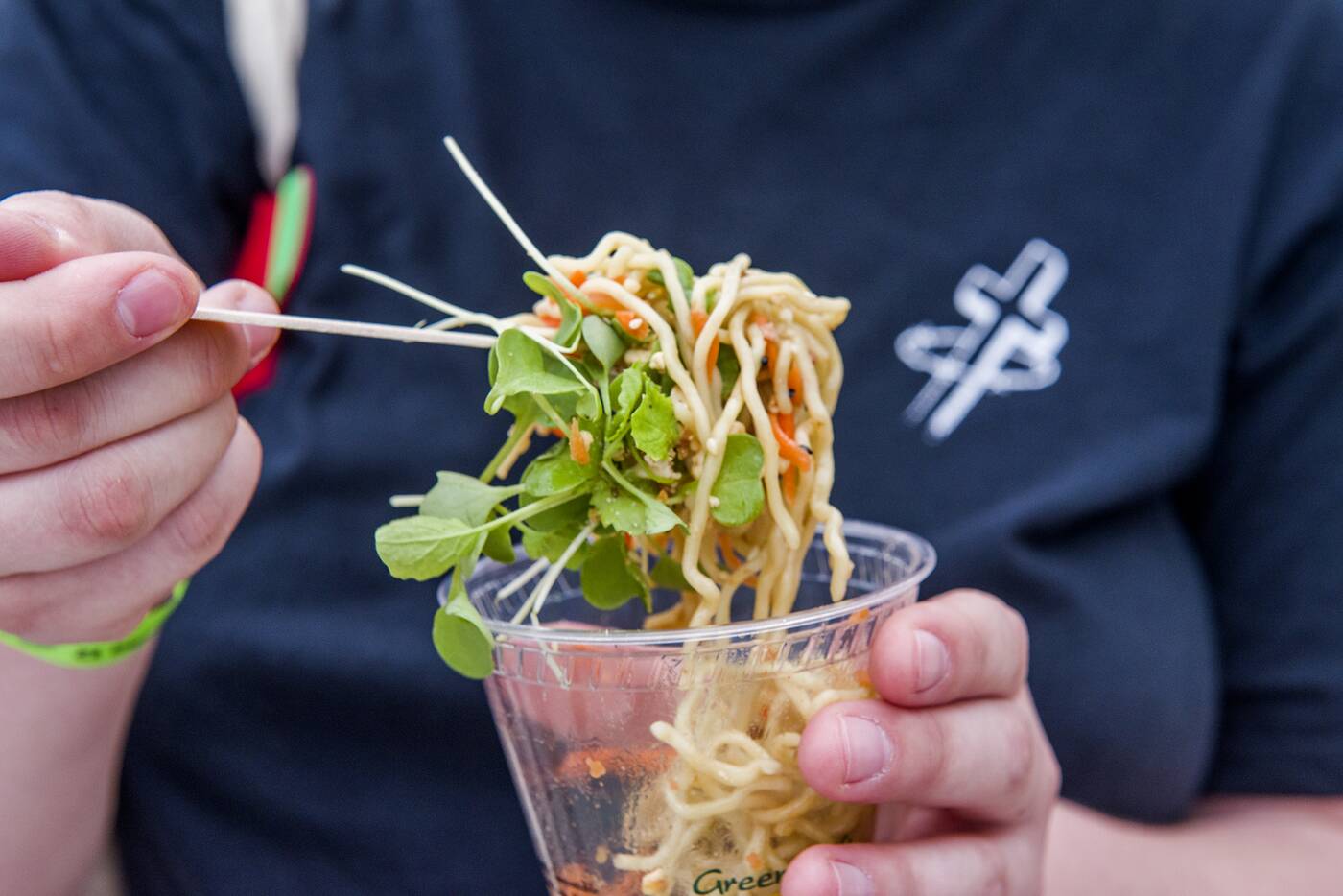 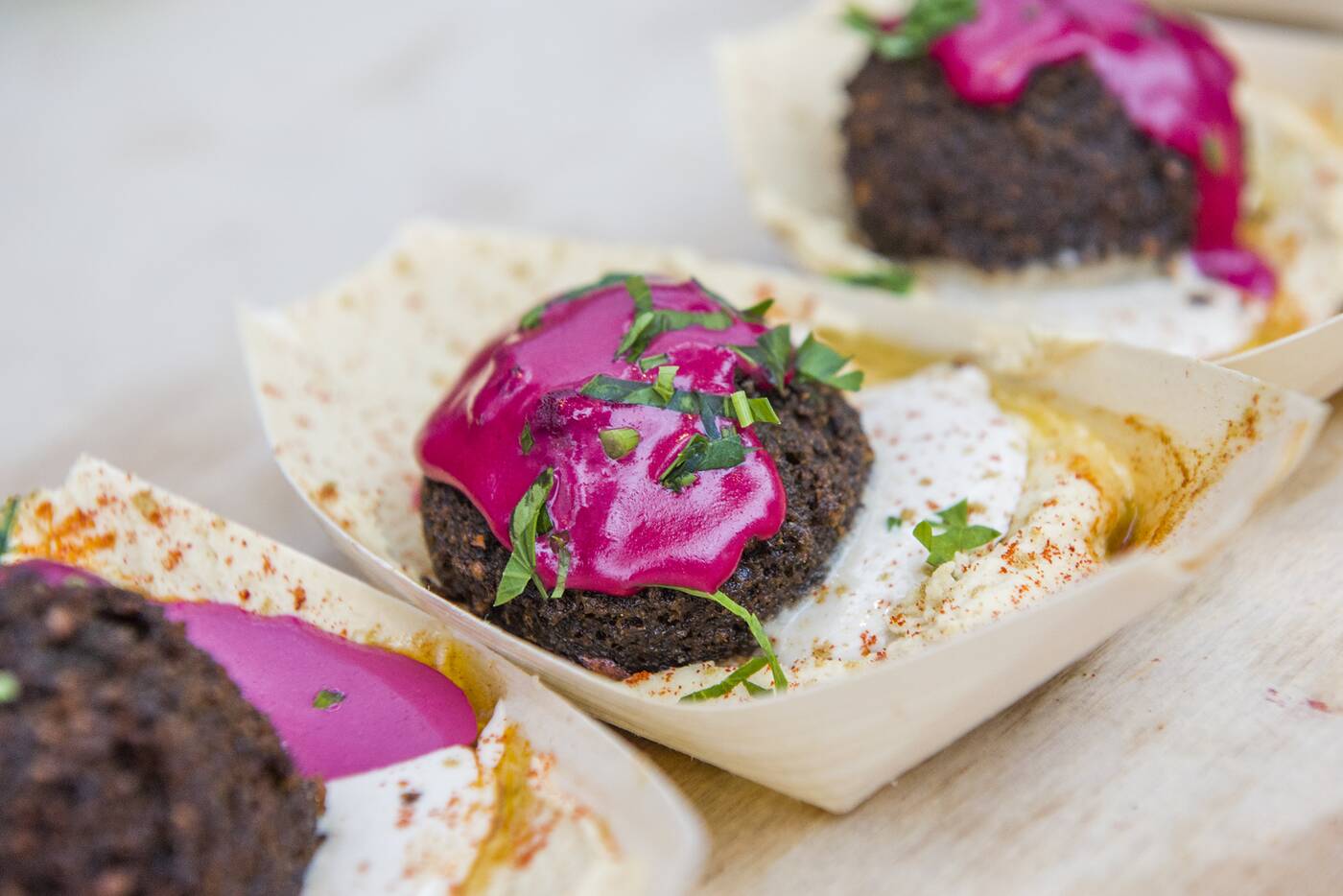 It doesn’t hurt that Sterling just so happens to be at the epicentre of an up-and-coming neighbourhood with a brilliant food scene, or that The Stop itself is a stone’s throw away at the north end of Symington.

Bettson tells me a lot of restaurant partners end up finding out about them from sheer geographical proximity. 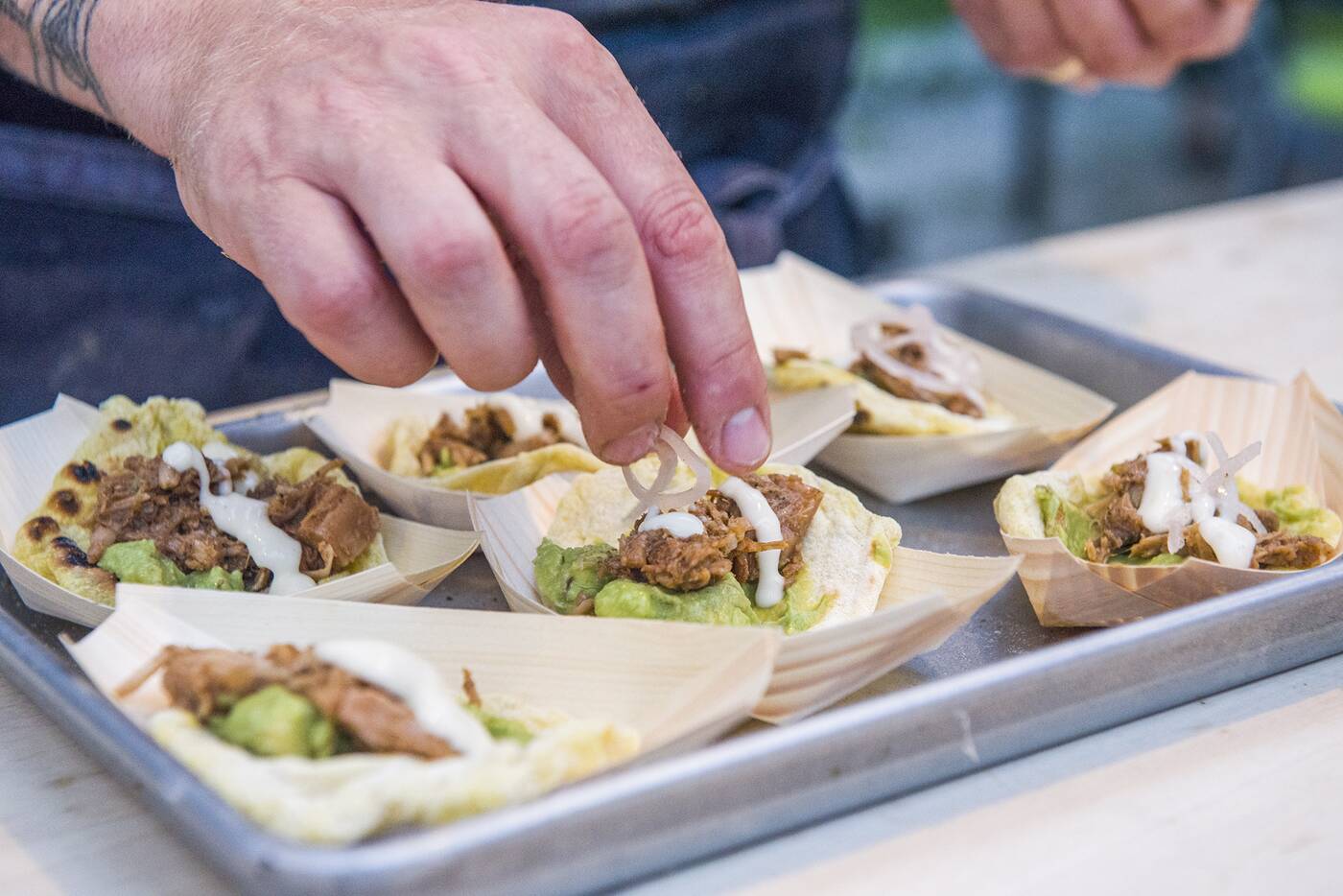 What else has changed? Apparently in past years all the booths had distinctly different artsy designs by Ryerson students. This year, the booths are made of plain two-by-fours with restaurant names in plain white lettering. 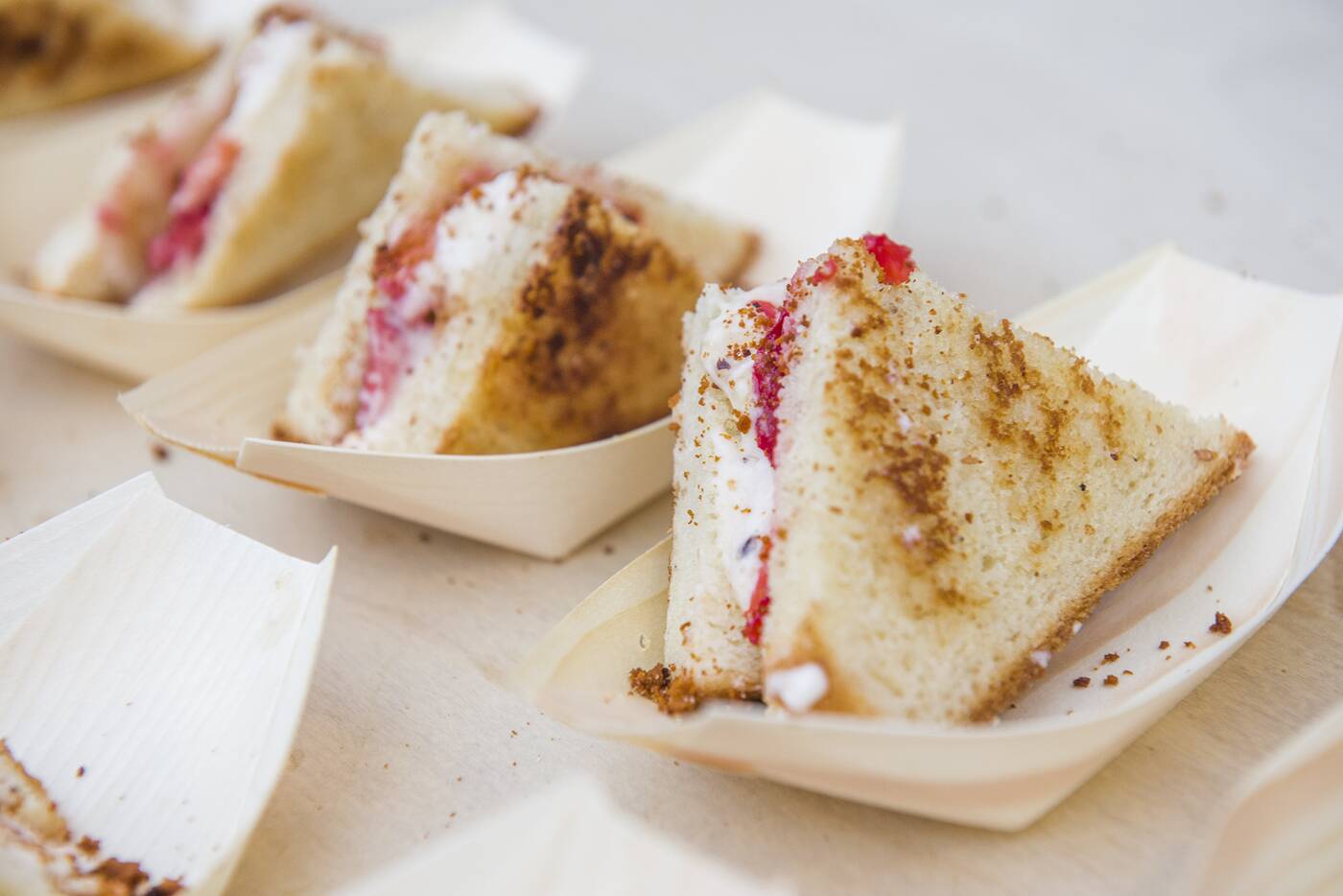 Rhubarb ice cream sandwich with honey brioche from The Stop.

No matter their role at the event, the common theme seems to be that though the event has grown a lot, the vibe and the feeling at one of The Stop’s most fun and accessible events has stayed as cheerful as always. 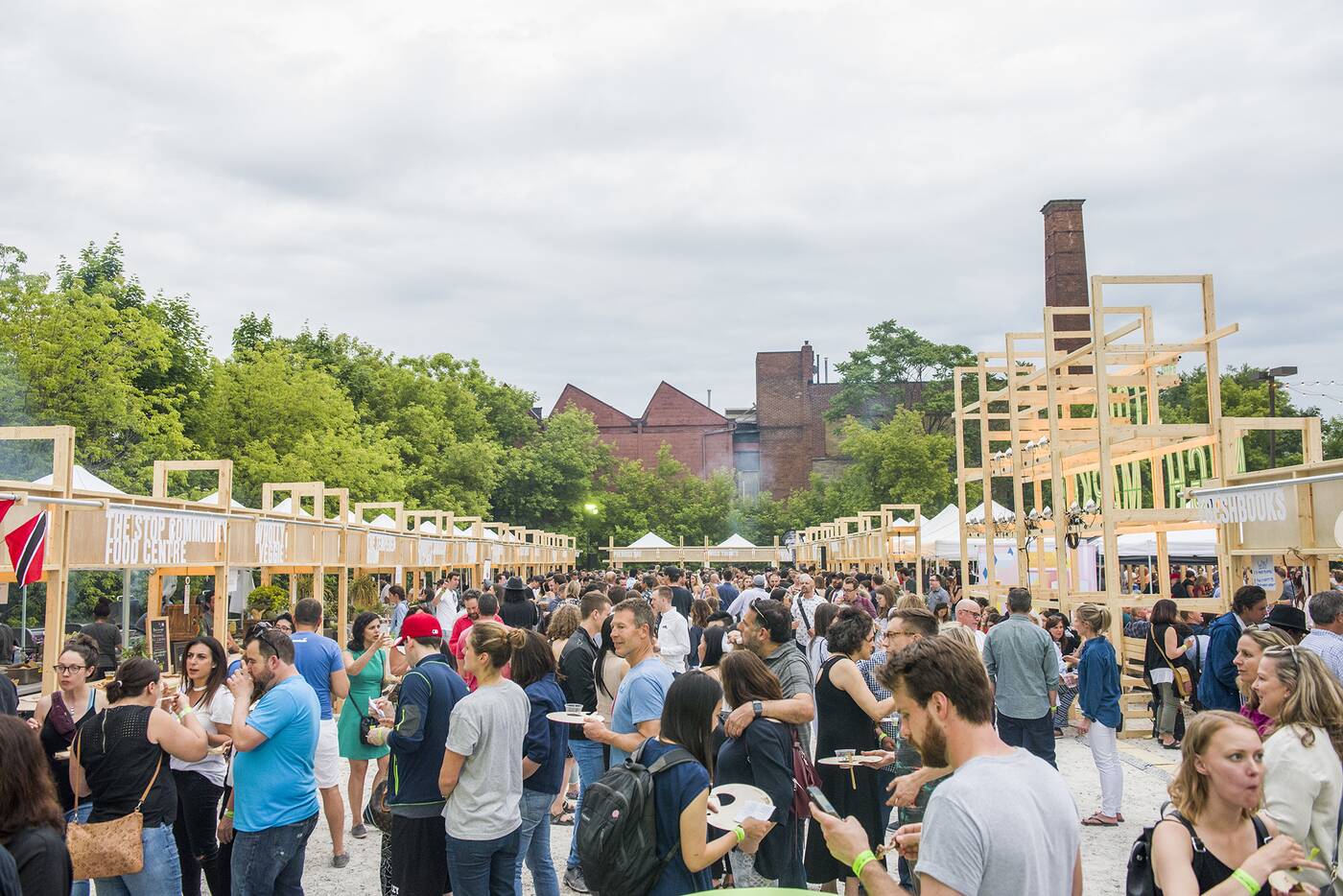