The top 30 pho in Toronto by neighbourhood

Pho is one of those foods in Toronto that can be slurped all year round. While the staple Vietnamese noodle soup has taken a back seat to the ramen craze in recent years, these aromatic broths nevertheless endure as the ultimate comfort food.

Here are my picks for the top pho in Toronto by neighbourhood.

Vietnam Lovely Noodle is a low-key spot where the real stand out is their build your own pho option. Select your broth and mix in up to three ingredients.

Bowls of pho can be found in this neighbourhood at Pho VP. Get piping hot bowls of pho in either small or large - no medium here.

Vit Beo serves Vietnamese snacks on Bloor. Among their offerings you'll find both vegan and beef pho on the menu.

Pho Linh is not only one of the best Vietnamese restaurants in Toronto it's also one of the best destinations for pho. Here you'll find finely sliced meat and noodles, generously served in deep bowls of pale broth.

Phosome serves up Vietnamese noodle soup on Parliament. Their pho can be prepared with gluten free, vegan, and vegetarian options in mind.

Once you're done furniture shopping in this area cozy up to a warm bowl of pho at Lac Vien Pho. Opt for their house special pho dac biet and be rewarded with rare beef, beef ball, tendon, tripe and brisket.

Anh Dao is a charmingly simple, quiet, and old-fashioned Vietnamese restaurant on Spadina. They have both beef and chicken options when it comes to their pho.

Pho Rang Dong near Lansdowne and St. Clair has over half a dozen options of pho to select from. 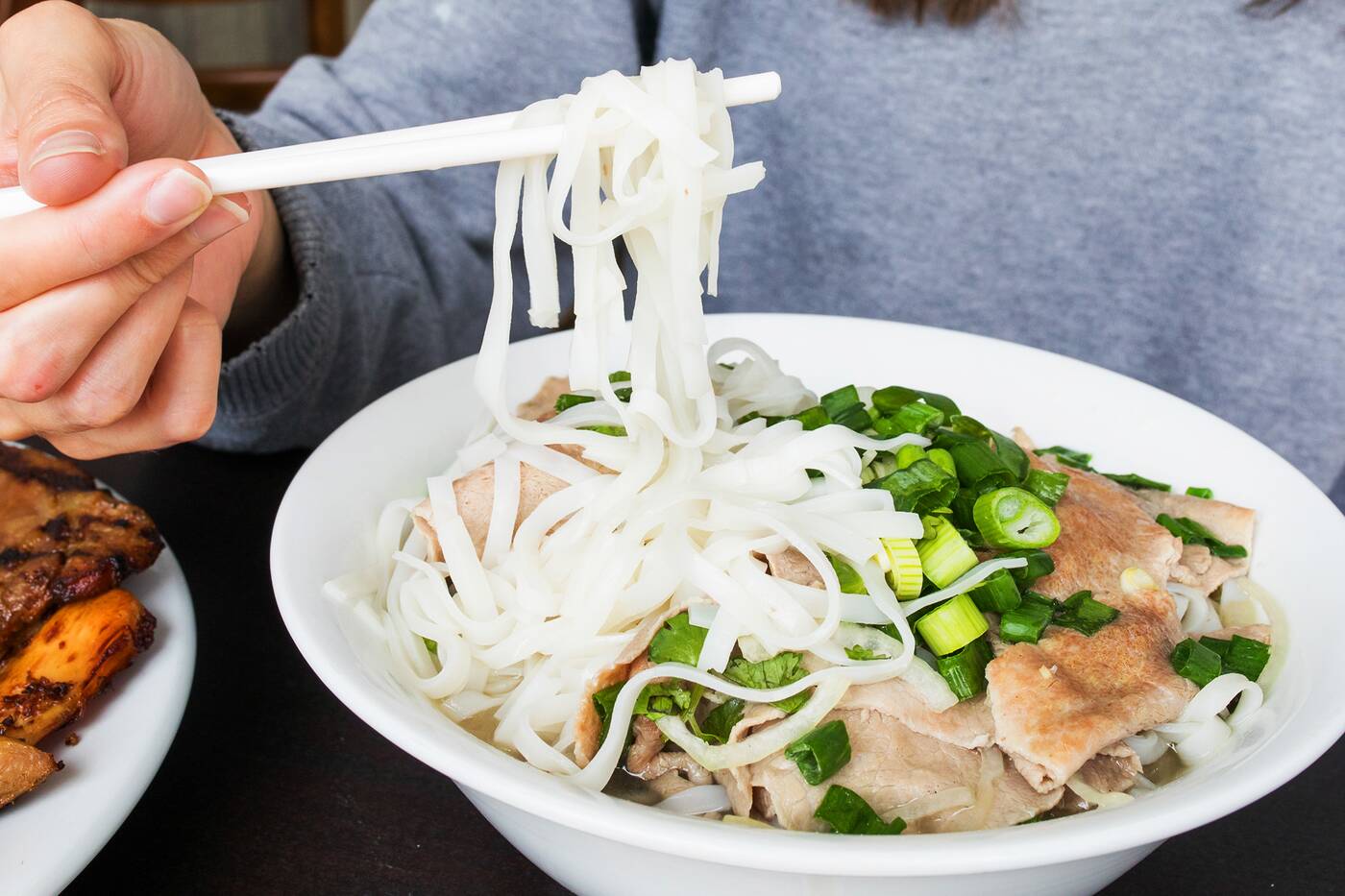 A bowl from Pho Co Duong will leave your belly full. Photo by Fareen Karim.

Oxtail Pho & Banh Mi says it all in the name: they serve hearty portions of reasonably priced pho and banh mi here.

Que Ling on Boulton serves up their homemade noodle soups in either a small or large size.

Little Coxwell is a Thai and Vietnamese restaurant serving up a number of curries and pho dishes. Pho is available with chicken, beef and there's even a vegetarian option.

If you find yourself on Browns Line hankering for some pho make sure to pop into Pho Dong Gia Viet Thai. Order up their Pho Bo and be delighted with bowl featuring rare beef, braised shank, beef ball, tendon, and tripe cube.

Pho Huong is a consistent spot for comforting bowls beef broth loaded with generous portions of protein. Steaming bowls of beef ball soup need just a squirt of Sriracha and a squeeze of lime to achieve perfection.

Saigon Lotus is a Vietnamese restaurant tucked into an eccentric old building in the market. They specialize in fresh rolls, pho, and vegan pho.

Com Tam Pho is a popular restaurant near Gerrard Square specializing in Vietnamese and Thai dishes. While the menu is filled with a number of items it's their pho that really stands out. It's served up affordable, tasty and super filling.

Sheppard restaurant Pho Co Duong is a Vietnamese spot with an extensive menu of vermicelli, stir-fried dishes and of course pho noodle soups.

There's a lot of stiff competition on this Toronto street but top honours is going to have to go to Pho Tien Thanh. Slippery rice noodles in delicate broths stand out on the menu.

Pho Challenge has served the neighbourhood a Vietnamese and Thai dishes for over a decade. A customer favourite is their rare beef rice noodle soup . 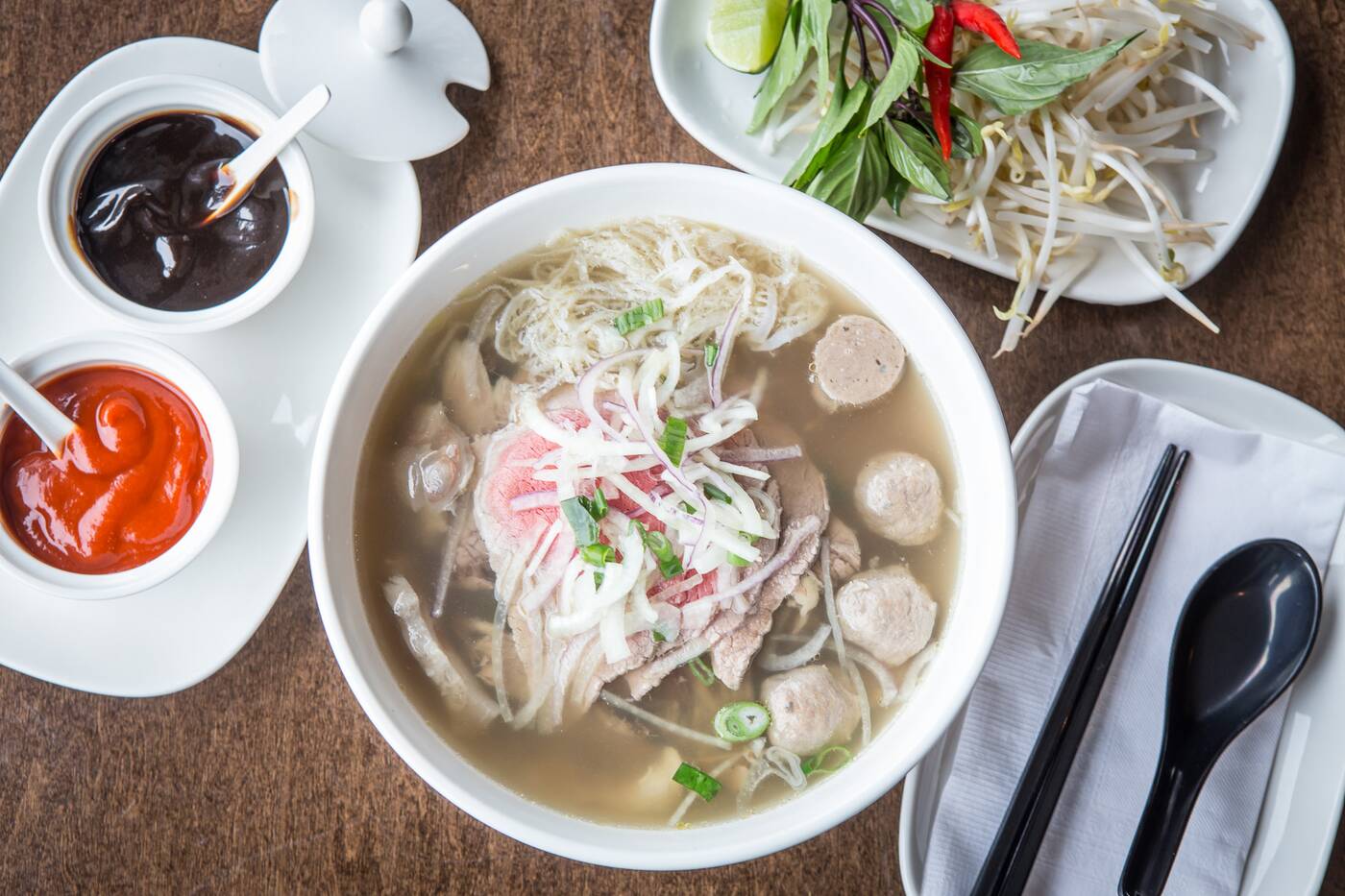 Pho King Fabulous is the ultimate comfort food on a chilly day. Photo by Jesse Milns.

Pho Asia 21 is the go-to near King and Dufferin to get big bowls of beef broth loaded with slippery noodles and handfuls of fresh herbs. In addition to the usual array of beefy soups, there's a seafood version that's well worthwhile.

Demen Bistro is a Vietnamese restaurant offering a menu of staple and popular dishes like rich bowls of piping hot pho.

Some of the best cheap eats in this area can be found at Pho Metro. The menu features 15 varieties of clear beef broth soup swimming with rice noodles and topped with heaping portions of meat.

Pho Lang Van may be serve up a variety of Vietnamese and Thai dishes but it's their pho that cannot be missed.

Pho 90 focuses on authentic Vietnamese food and one of the most popular dishes on their menu is of course their pho. There's over a dozen of options of pho on the menu and it's even available in an extra large size if you're really hungry.

Pho Asia 39 is a casual Vietnamese restaurant at Jane and Weston Road. The menu is full of pho options ranging in sizes and toppings including rare beef, beef balls and chicken.

If you're looking for a quick lunch option look no further than Ginger. The restaurant on Yonge Street caters to the student crowd and serves six different types of pho.

Boasting one of the most boastful restaurant names in the city Pho King Fabulous also makes good pho. There are traditional options as well as more unique pho like pho do bien with tiger shrimps, fish balls, and crab sticks.

Each bowl of pho at Sprout is served with rice noodles, bean sprouts, onion and coriander.