Bellwoods Brewery is opening a second location. It's a sentence I've been looking forward to typing for months, but given that Luke Pestl and Mike Clark, the owners of one of the city's best beer destinations, haven't been ready to release the details publicly, I've remained quiet, though it hasn't been easy.

This morning, the brewers made an announcement on their website (so I can finally yell it from the mountain top: Bellwoods, a place that has been churning out award-winning beer since they first opened their doors in 2012, and a venue that's perpetually rammed with craft beer nerds and scene-seeking Ossington-bar-hoppers alike, is efffing expanding.

Located at 950 Dupont Street, currently the home of GH Johnson Trading Company, the second installment of Bellwoods Brewery has long been in the works, and while the Bellwoods folks are close to finalizing the details, they're still ironing out a considerable amount of the finer points in terms of the municipal zoning, city variances, and a handful of other not-so-fun stuff that actually takes up a lot more of a brewery owners' time than they like to talk about. As Clark tells me via phone, "I'm the company bureaucrat at the moment."

For the most part, the bureaucratic work involves ensuring that Bellwoods can have exactly the kind of new brewery they want, and the plans for said brewery are extremely exciting for Torontonians. The space -- more specifically the soaring 25,000 square foot "glass box" portion of that address -- will include a sprawling brewing facility, a potential retail space, a hop garden/green roof, a tasting room, and an event space--both of which will incorporate outdoor seating by way of a ground-level patio on the west side just north of Dovercourt and Dupont and a rooftop terrace on the north section of the glass box.

Clark and Pestl seem very much concerned with ensuring that the space is aesthetically pleasing and it seems clear that the multiple event spaces that will be available could soon be in high demand, both among corporate event planners and beer fans looking for a spot to host their wedding. So now I need to convince my wife to divorce me so we can get re-married there. 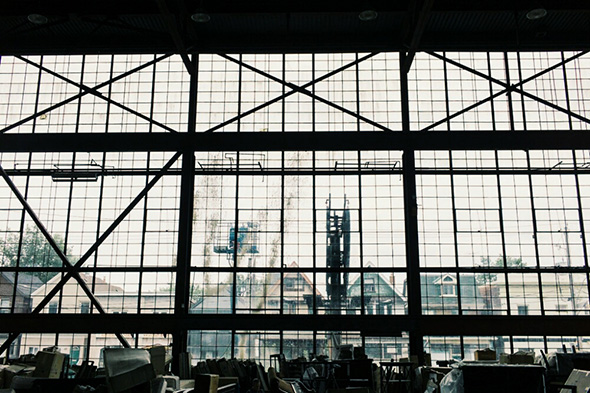 The brewery istelf will likely produce 8,000 hectolitres of beer to start, but will eventually produce upwards of 15,000 hectolitres once production maxes out (for some perspective, that's roughly a quarter of the amount of beer Steam Whistle produces at The Roundhouse). Accordingly, while they'll still be very much a "craft" brewery by industry standards, there is going to be, in scientific terms, a shit-ton more Bellwoods beer flowing in Toronto in the next few years.

Clark tells me that he and Pestl are obviously very excited about the new space and are hopeful that they can be a draw in their new neighbourhood just they have been on Ossington. In addition to the obvious bonus of providing local residents with a place to get hyper-local craft beer, the Bellwoods guys are looking forward to be part of restoring an amazing space that has, as of late, had the rather unglamorous function of storing furniture and garbage.

"It's an awesome building that's one of the best remaining examples of mid-20th-century manufacturing on Dupont." Clark says. Indeed the building has largely been derelict for 25 years but is a space with a considerable amount of local history, It once housed Hamilton Gear, a quintessential manufacturing company that created machine parts which, among other things, move the locks of the St. Lawrence Seaway, retract the Rogers Centre roof, and even once opened and closed the pilot's canopy over the cockpit of the Avro Arrow.

Happily, the brewers have discovered a landlord who sees the value of maintaining the space and has opted to do the restoration work for them. There will be considerable restoration on the glass and resurfacing inside, as well as the large task of bringing the manufacturing equipment up to modern mechanical specifications; a commendable effort in a city that often seems geared more toward knocking things down to build more condos.

"The landlord thinks it's a beautiful structure and wants to preserve it," Clark says. "And he wants a young and up-and-coming tenant to occupy it and hopefully bring some new life to the neighbourhood."

Construction and restoration will likely commence within the year and then it's just a short wait for the doors to open and the beer to start flowing.