Indie Alehouse gets Toronto artists to design its labels

Up until now, the beer available at The Indie Alehouse — whether it be in a glass from bar or in growlers from the location's onsite retail space — has been emblazoned with a simple Indie Alehouse logo that was originally created by local designer Patrick Duffy.

That's soon set to change when Indie Alehouse will unveil their first beer labels. And, like he's done with most things related to the growth of his business, when it came time to create those labels, Indie Alehouse's Jason Fisher opted to embrace a decidedly Junction-focused approach. 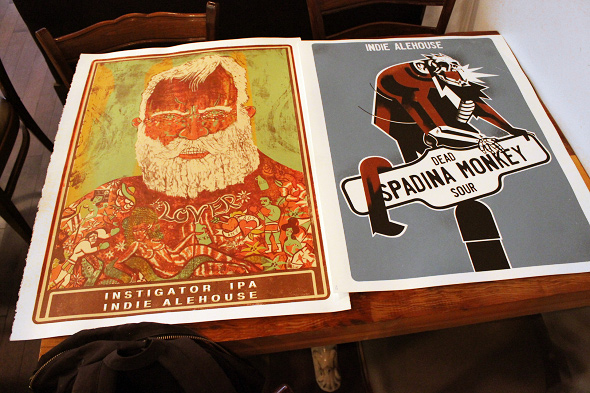 In order to create art related to his beer-- thus far only in poster form — Fisher has engaged local artists like Jon Todd and Shea Chang who run Smash and the print shop below it, or Dave Murray, a local artist likely best known for his typographical work like the Toronto neighbourhood word map posters. Fisher will list five or six beers that Indie's brewing and if anything strikes an inspirational chord with the artists and they've got free time, they make a poster for that beer.

The process is decidedly informal, much like the clearly staged photo of Fisher and Murray that accompanies this post. Fisher provides a two-sentence blurb about the beer and its history and the artists have free reign, with one exception. "No swastikas," Fisher jokes, "but other than that, they can pretty much do whatever the hell they want." 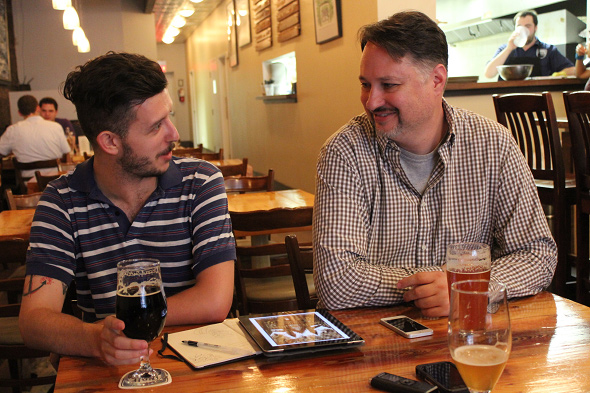 The pay hasn't been much (Fisher kicks back the money from $40 poster sales to the artists responsible), but once the poster art becomes a beer label, this seems destined to be an even more mutually beneficial relationship: Indie Alehouse gets labels created by local artists and those artists get to add their very own beer label to their portfolio; and as Murray confirms, it's a relationship that's pretty agreeable to the artist. "It's fun for me. It allows me to kind of break out my defined style I use and just play around," he says. And naturally, there's one obvious perk for occasionally cash-strapped artists. "Jason keeps me pretty well lubricated," he says.

But much like when he went looking for someone to furnish his restaurant, Fisher's ultra-local approach isn't so much a desire to be cool or trendy as much as it's just a matter of convenience, nor, as he's willing to admit, is the idea all that original.

"I didn't invent it," he says, "When I went to [famed US craft brewer] Dogfish Head, they had a bunch of art on the wall, and it was all kind of funky. I asked them about it and they said, we have a couple of friends who are artists and we tell them about the beer and they use it as inspiration. That always kind of stuck with me, but I never had any friends who were artists before I came to the Junction. Then I met Dave and I met John and I kind of pitched the idea." But no one really got into the idea until Fisher explained one of his more colourfully-named beers. "I said, 'We're making a beer called Cockpuncher and we want a poster,' and John said, 'Done.' So here we are." 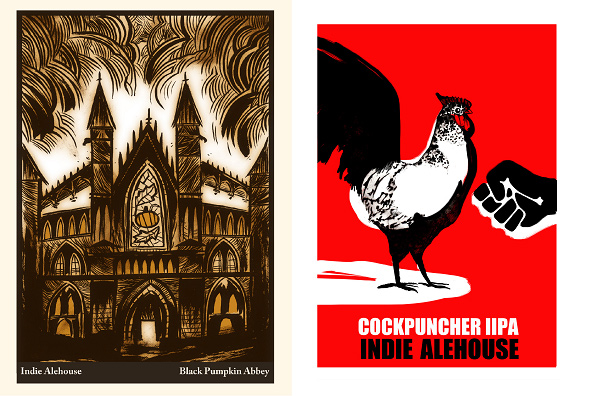 As for which beers in Indie's always-changing lineup will be worthy of labels, aside from some of the mainstay brews, it's up to the artists. If they're not interested, there won't be any art. If they do find one irresistible, even if it's a one-off, it could get its own art. For example, the forthcoming "Burning Boat" a 12% ABV Chocolate Barley Wine rumoured to be debuting during Toronto Beer Week and based on the story of Cortez landing and setting his boats on fire so his own troops couldn't go home clearly needs its own label.

Additionally, Indie will soon be taking the idea of beer collaborations to another level when they team up with Bellwoods brewery and will call on Dave Murray and Bellwoods' label artists Doublenaut to collaborate on the label.

Expect to see 750ml art-emblazoned bottles of beers like Jump the Shark, Zombie Apocalypse, Rye so Sour, and Spadina Monkey rolling out of Indie's retail space before Christmas time. Then the only question will be whether to recycle those empties or hang them on the wall.

Ben Johnson also writes about beer over on Ben's Beer Blog. You can follow him on twitter @Ben_T_Johnson