10 ways to cure a hangover in Toronto

Given that I so frequently provide guidance on how and where to drink in Toronto, it seems irresponsible that I have yet to provide any advice on how to handle the after effects, namely your hangover.

So, while I don't provide any guarantees that any of these will actually work for you, the following handful of great local options for the morning (or afternoon) after drinking might just help you fight the pounding in your head and the taste of death in your mouth after your next epic night on the town. As for the stains on your shirt and the shame in your soul, well, you're on your own.

1. Fight fire with fire at Fynn's of Temple Bar with their London Calling Caesar ($12)
With dill and cucumber-infused gin, cucumber, Worcestershire, and jalapeÃ±o Tabasco, the UK-inspired version of this Canadian classic is a bit more refreshing than some of the other options on the bar's excellent Caesar menu — a list that includes caesars with bacon infused vodka and pepperette garnishes. Bonus: With all that greenery involved, this is a beverage that's got all the nutrients you might need to tide you over until the idea of eating something seems less heave-inducing.

1b. If you're going to need a few Caesars, you might skip Fynn's $12 offering and opt for the bare-bones version at Lakeview. It's just your standard Caesar, but at $4 a pop, you can economically have a few to battle those extra nasty hangovers. 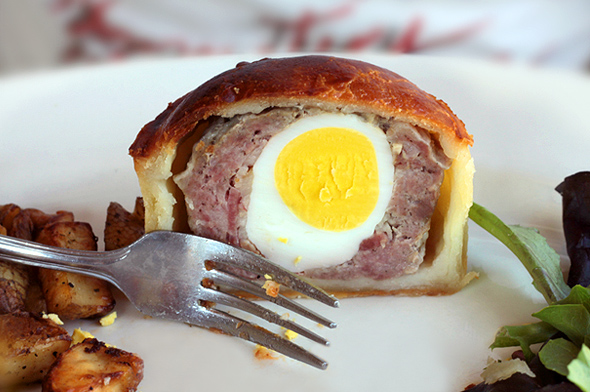 2. Show your stomach who's boss with The Bristol Yard's breakfast pie ($12)
Some might opt to nibble dry toast with a blue Powerade the morning after drinking, but I say jump in with both feet. The breakfast pie at The Bristol Yard is something like what you might get if a Scotch egg had sex with a pork pie. It's a hard-boiled egg wrapped in sausage and covered in pastry. Just the thing to kickstart your morning. And hey, if you keep it down, you're golden.

3. Hide in the dark of a matinee at at Revue Cinema ($11 plus snacks)
Perfect for days you can't conceivably socialize, the anonymity of Toronto's not-for-profit cinema provides the perfect hiding place from your hangover. Nurse yourself back to health with popcorn, licorice, and fountain pop while taking in a matinee. Bonus: For those extra haggard weekends, Revue Cinema features Silent Sundays, a celebration of silent cinema for those days when even trying to listen to dialogue is too painful.

4. Soak up the booze with Bacon and Eggs from Rose and Sons ($12)
A fatty breakfast isn't a new idea for a hangover cure, but if you're going to do it, do it right. I'm talking about Rose and Sons "Eggs-3" — a breakfast platter that includes three eggs, hashbrowns fried in schmaltz (yeah, that's rendered fat) and your choice of bacon, sausage, or a pork chop. Pro tip: opt for the bacon. It's made in-house and cured in Dr. Pepper. 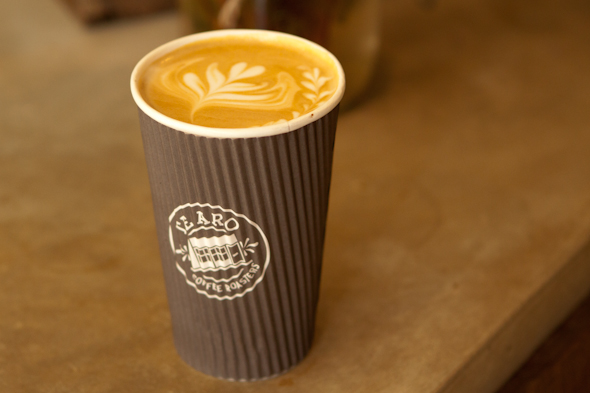 5. Clear the cobwebs with coffee from Pilot Coffee Roasters ($2-$4)
For those that opt to fight hangovers instead of wallowing in the funk of the day after the party, why not caffeinate with in-house roasted, single source, Direct Trade coffee at Te Aro? This is coffee for people who really fucking love coffee and should be more than capable of opening your bloodshot eyes. The coffee shops (one on Queen East and one on Ossington) even host coffee tastings so you can sample brews the owners sourced themselves by travelling to the location of growers, including a cold-drip version made from distilled ice cubes that takes six hours to make. Or you can just get a Tim Hortons Ice Capp ($1.98). That works too.

6. Get stoned at Vapor Central ($5 to get in, BYOW)
It's a hangover cure that's been around since the beginning of time — or at least since your first year of university: the wake and bake. Provided you don't have too much to get done the day after a spirited bout of putting back beers, why not write off the next day too and mellow your harsh hangover by burning a few at "Toronto's original vapor lounge"? There's bongs and vaporizers available for rent, and, most importantly a well stocked (snack) bar. Just make sure to bring your own pot, there's a strictly-enforced no sharing/selling/mooching rule in effect. 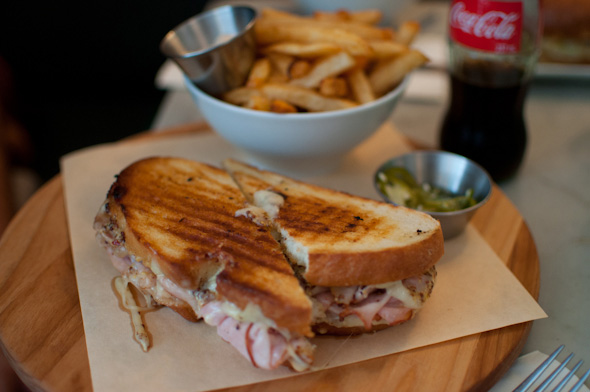 7. Fill your belly with The Cubano special at Delux ($15)
The "Cubano special" is a bit of a misnomer given that it's not really all that Cuban, it's served in a restaurant that's primarily French, and it's really just a combo. Nevertheless, the $15 is well spent for a pressed Cubano sandwich that features finely-shaved, cider-cured pork, cheese, and grain mustard and comes with fries, a side of thinly sliced jalapenos and a why-is-it-so-much-better-in-a-glass-bottle coke. It's quite simply a delicious lunch and, with any luck, by the time you finish it you'll be game for one of their mojitos ($8).

8. Take a spa day at Elmwood ($95-$1000)
Obviously this is a rather expensive cure for a hangover and you might question the logic of rewarding yourself so lavishly for your debauchery, but if you can swing it, a day at Elmwood will go a long way to making you feel like a million bucks again (or however much you usually feel you're worth). Spa treatments here run the gamut price-wise (facials from $100-$250, massages from $95-$300+); however, almost all treatments include complimentary "Water Therapies," meaning you can show up early and hang out in the whirlpool, steam room, and swimming pool. Bonus: Monday through Thursday Water Therapies are included with the price of manicures and pedicures, which can cost as little as $42, so float in the pool for a few hours while the booze wears off and then get your nails did. 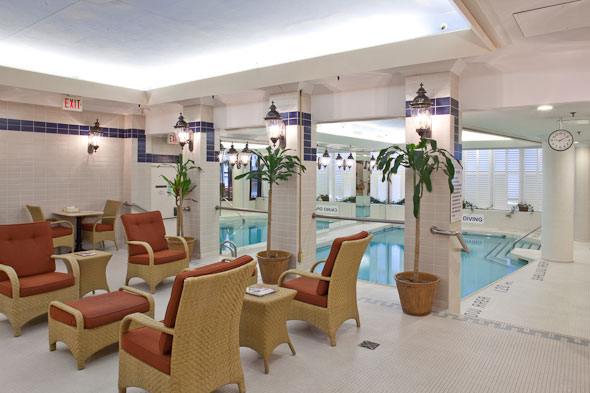 9. Outclass your hangover at Le Select Bistro
Everybody seems to be hopping on the big greasy brunch bandwagon these days (see some of my choices, above), but for my money, the best brunch in town is to be had at Le Select Bistro. The fare is classic Parisian cafe-style and the atmosphere and clientele make it seem almost an inappropriate place to be hungover. Feel like a grown up trading in the greasy eggs and Caesars for Atlantic salmon gravlax on a croissant ($12.95) paired with a Kir Royale ($9.00) and shame your hangover away with fabulousness. But feel free to keep your cheap sunglasses on.

10. Sweat it out at CrossFit Toronto ($25)
If you want to kick your own ass for behaving so poorly the night before, drop in for a serious workout at the city's first crossfit gym. It's basically a 5000 square foot playground that's got sure-to-make-you-swear-off-drinking toys like strongman logs, Atlas stones, and sand bags to throw around. If you get sick of kicking your own ass there's even martial arts classes. The first session is free, with a drop-in fee of $25.

Ben Johnson also writes about beer and drinking over on Ben's Beer Blog. He's also aware that the only real cure for hangovers is not drinking at all or, as some of his uncles taught him, never stopping your drinking, but these things seem to help. What's your Toronto hangover cure?