How to make a cocktail: the Old Fashioned

As with the division of opinion over egg whites in a cocktail (via last week's piece), the Old Fashioned is a cocktail that has split much of the bartending community in terms of the necessary ingredients. Lots of bartenders tell me that this will be the first drink they order on arrival at a new bar: the delivery thereof will often be the acid-test of whether to explore the cocktail menu further or just stick with a beer.

At it's best, the Old Fashioned is an elegant mix of delicately sweet and spicy whiskey. In the wrong hands, it can be a fizzy mess of undissolved sugar and gunky fruit. As far as the things that everyone agrees on go, it's that the drink must contain North American whiskey (most will insist on bourbon, but as with many Prohibition era cocktails, it's likely that this drink was first prepared with rye), sugar, and bitters, all stirred over ice and served on the rocks. From there the discussion is endless, and fierce. 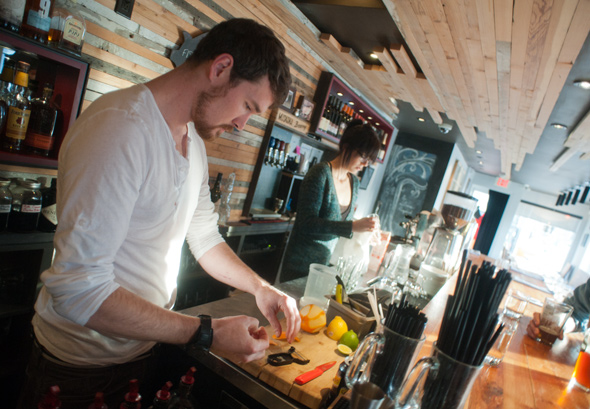 One camp, led by one of the USA's great bartenders and cocktail historians, Dale Degroff, insists that the drink be prepared not only with the addition of a splash of soda water, but also with muddled fruit. In particular, a maraschino cherry and an orange slice. Degroff insists that anything else is just "sweetened whiskey."

Naturally, the other camp disagrees heavily, calling the addition of any fruits (other than a garnish of lemon or orange zest) the result of a need for a "fruit salad" rather than a cocktail. The current champion of this school of thought is Brad Thomas Parsons, whose book Bitters has called for a better understanding of the real flavouring agent in this classic drink. The introduction of other influences prevents the enjoyment of the whiskey, and, more importantly, the complex flavours of the bitters. 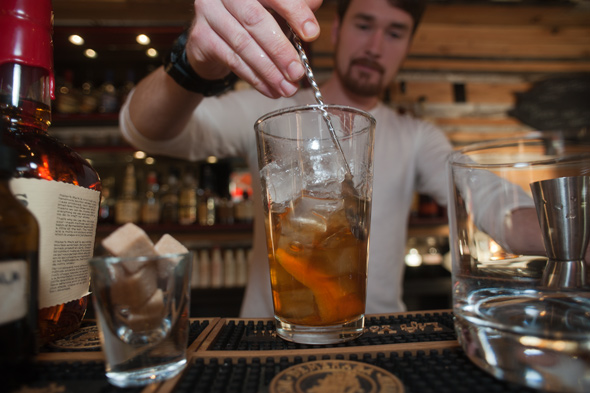 Jeff begins in a mixing glass (Jeff explains that you should "never make a cocktail in the glass you serve it in") with a cube of raw sugar, soaked in his bitters, which is then mashed before expressing the oils from the zest of an orange into the mixture. 2 ounces of Maker's Mark are then stirred into the drink to fully dissolve the sugar before ice is added. A further 20 seconds of stirring are needed before straining over fresh ice into a short tumbler, or "rocks" glass. Add the orange peel to garnish. 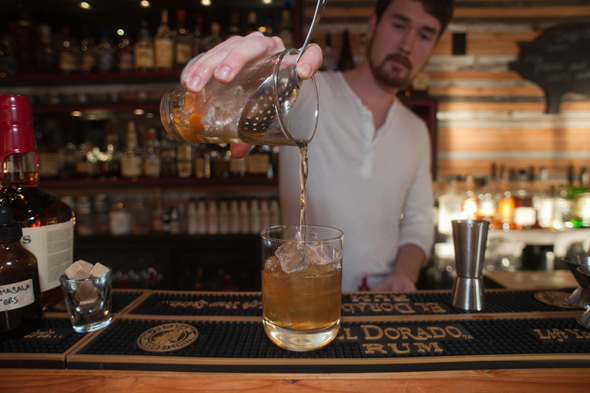 Jeff's bitters recipes are a closely guarded secret (though he admits using a combination of cinnamon, cloves, cardamom, and dried cherries steeped in bourbon, to name a few ingredients). His own inspiration came from sniffing around his spice rack at home, but he heartily recommends Angostura for anyone wanting to make the drink themselves without going to all the trouble. 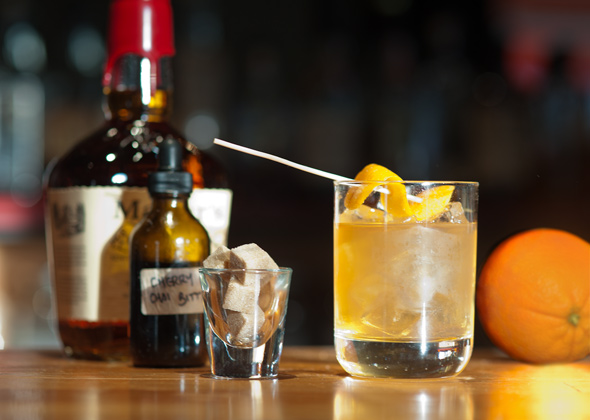 If you are interested in making your own bitters, Jeff reminds us that it's not an overnight process, and to set aside at least two weeks to allow the flavours to mingle. If you want to try his concoctions, including Apple Cinnamon Bourbon Bitters, and Cranberry Orange Rum Bitters, get down to County General at 936 Queen St. West.