The search for nightlife on the Danforth

The nightlife on the Danforth has always, in my experience, been rather wholesome and gentrified. My boyfriend's mother lives in the area and I always look forward to picking up loukoumades (with an embarrassing degree of glee), or a glass of Andeluna wine at Lolita's Lust. But head east of Pape and the sounds of Greek festivity die down, the businesses become dimmer and less populated. The street takes on an almost Detroit-ian quality.

With rumbling stomachs, our motley group of four start the night at Morgan's, a six month old pub with dark wood accents and a well-lit selection of fine scotch behind the bar. Each booth has an individual dimmer switch--something I make increasingly childish use of over the course of the hour--and there's good ol' fashioned hockey on the flat screen.

The food is upscale in price alone (think $16 for a modest burger) and tastes mostly mediocre, with the pate platters' pickled accoutrements drowning in oil, and the Caesar salad's bacon bits tooth-achingly hard. Still, there's a decent selection of craft beer, a cask ale, and my French martini ($9) is a sweet accent. Voices are raised at the bar over health care and hand-outs, but it's too early for a brawl--that came later. 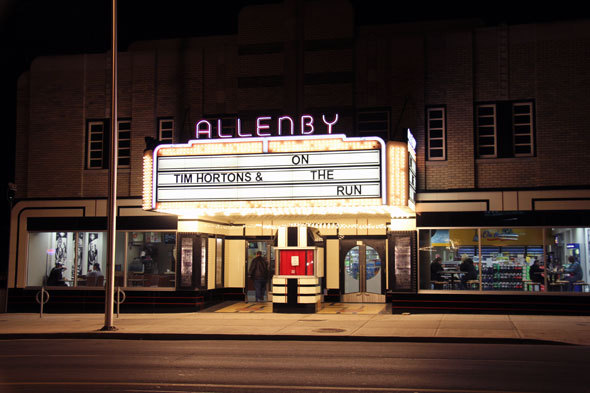 Next, we head west and after admiring the Allenby theatre-turned-Tim Hortons marquee, we flip a coin between two neighboring bars. Eastenders has a lonely pool table in the back lit tragically by fluorescence, which we soon learn is the calling card of the Danforth sports bar. The second is enticingly dim, and I cannot tell a lie: the electric disco ball casting blue pinpricks through the darkness draws us into Asmara.

Inside this Eritrean bar is soccer on the televisions and a woody incense in the air. Three Canadians and an overflowing glass of Shiraz comes out to $20--smiles all around as we tiptoe around the deep gash Morgan's left in our wallets. When we bob our heads to the Ethiopian tunes, the DJ gamely turns up the volume, and although the dark wood wraparound bar is mostly filled with men's men nursing beers, toes tap.

When it's time to go, my boyfriend whispers, "You just know this place is going to explode into a crazy dance party the moment we step out the door." It's true--something fabulous is brewing, but we have more of the Danforth to explore.

We sidestep Passion Restaurant and Lounge, whose grated entrance and deep blue light is flanked by bouncers without anyone to bounce, then briefly step in and out of Tommy's Grill and Bar, which is scattered with people aiming penetrating looks at the walls over the rims of their drinks. A quick pop-in at The Only Cafe reminds me how much I love it, from the curious wall art, to the eccentric collection of beers, and my personal favourite: Rekorderlig cider.

We'd heard tempting jazz riffs from the basement location of White Swan on our way towards dinner, so we make a straight beeline back. The mood has changed markedly, and can best be described as Twin Peaks-meets-Savannah. Mardi Gras beads twinkle around everyone's necks and we learn it's their Spring Party, although the bartender assures us that parties are a monthly affair, with sometimes-arbitrary titles. 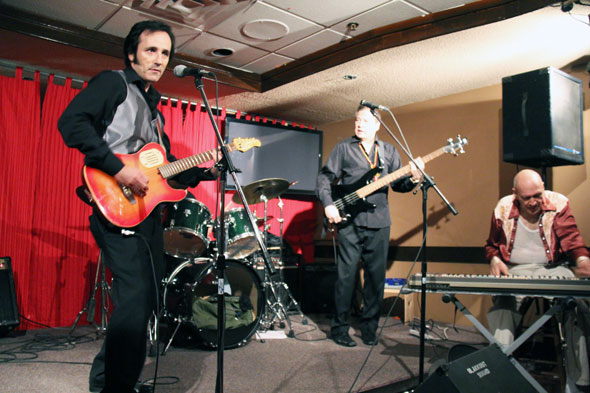 I spot an array of characters, including a thick-browed middle-aged woman in a camel-coloured leather jacket strumming air guitar and an amorous elderly couple on the pristine white couch, while a crowd gathers and drunkenly shimmies to a cover of "Brown-Eyed Girl" sung by a velvet-voiced woman. She sports a hat lined with fluorescent smiley faces (of course).

My boyfriend and I slow-dance as a man in a mesh top and satin sports jacket plays the keyboard. Later, the crowd cries out for Elvis, who arrives in a metallic vest and a convincing baritone and somewhere behind us, a woman calls out: "You only have one life to live and this is it." Best of all, aside from the high musicianship and the motley crew of attendees, $15 gets you a Singapore Sling and a beer, but as I'm sure you can infer, this won't be everyone's cup of tea.

By this point, the night is winding down. With precious little time to spare before last call, we split our time between Maverick's, where bottles of beer are $3.55 and Strongbow flows on tap, and the Eton House. A quick note about the latter: it's a really excellent place to play pool, and not just because the live acts are almost as eclectic and surprising as what we found at White Swan. 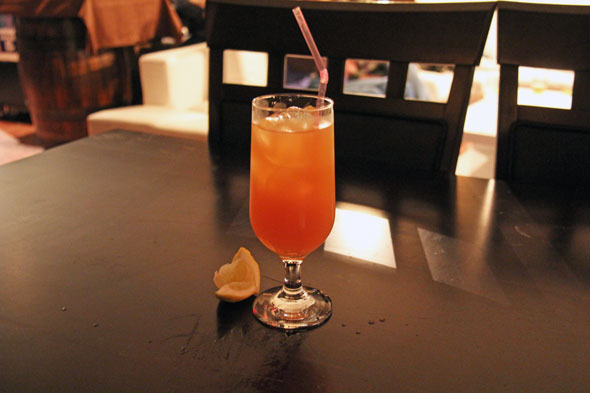 The argument can (fairly easily) be made that certain pockets of the city have been known to attract a more negative sort of clientele, and this yet-un-gentrified portion of the Danforth is among them. I came across this at Legends, where we arrive just before 2 a.m. and are quickly ushered to their upstairs bar, a somewhat misleading moniker as it's more of a glassed-in room raised several steps above the main floor.

There we found a mostly friendly group of folks--one was quick to share his shot of Metaxa with us, while another told me I'm a dead ringer for TV's Lost Girl and inquired as to my marital status.

Things went south when I pulled out my camera to photograph the bar, and a heretofore silent patron erupted in rage. Racial slurs were spoken and my honor deeply offended. If I would've stuck around, perhaps the situation would've resolved itself amicably, but in the twenty years since I immigrated from Romania, I've never encountered such (senseless) vitriol. It was a bad end to a great night but also an arguably representative slice of the many types of people you can encounter in any bar, on any given night.