214 Augusta is one of Toronto's foremost destinations for Latin American eats.

For over a decade, the cramped quarters of this house-turned-food corridor  in Kensington Market —  sometimes referred to as the El Gordo Food Court — remains one of the city’s hotspots for Mayan tacos, empanadas and sugar-coated churros. 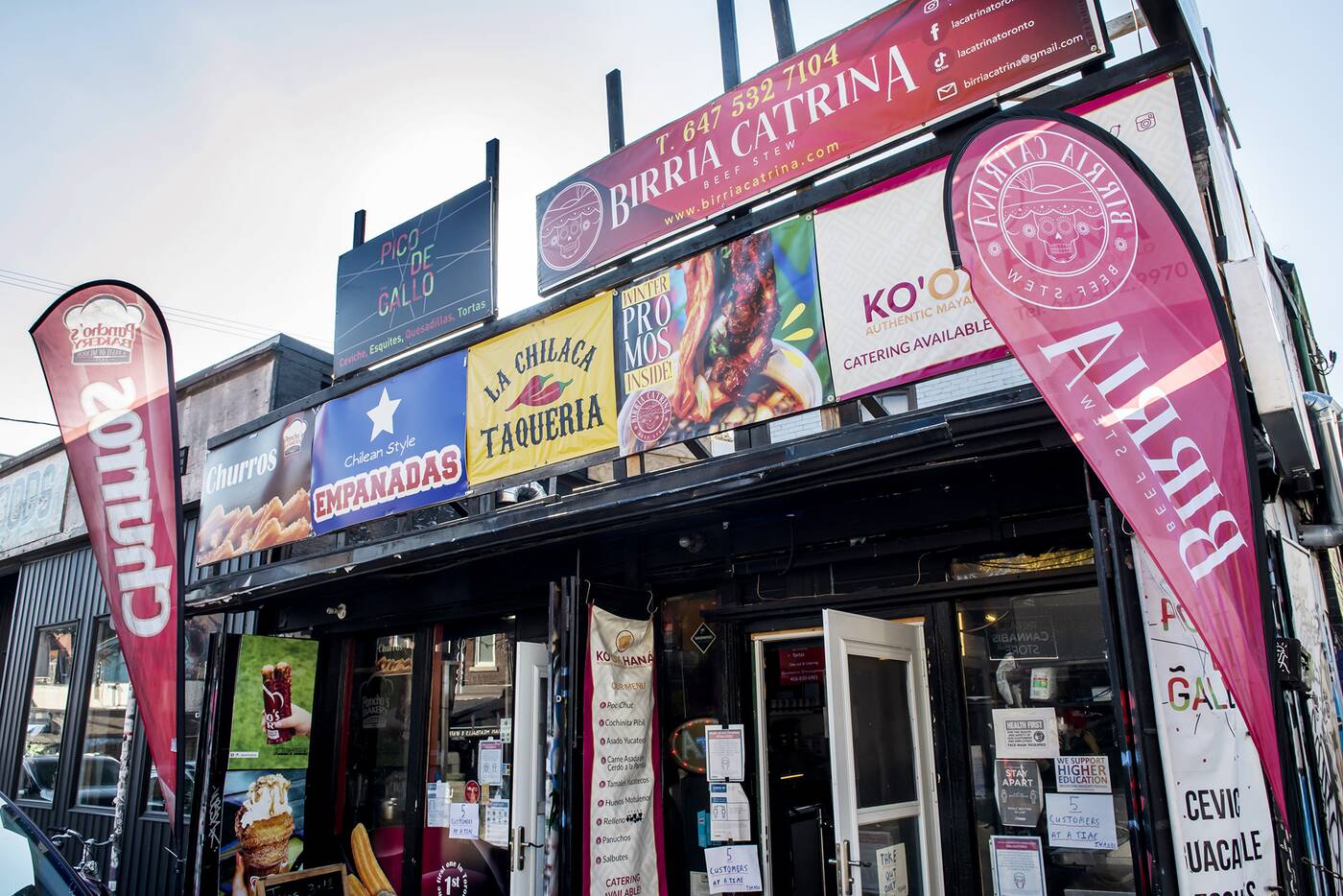 214 Augusta is food corridor located in a repurposed building in Kensington Market. Photo by Hector Vasquez.

What began as a single-vendor building in the early 2000s now plays host to six businesses, some old, some OG, dealing in (mostly, but not limited to) Mexican cuisine.

214 Augusta is also one of the most underrated restaurant incubators in Toronto: It’s like the DMZ of Latin American food. 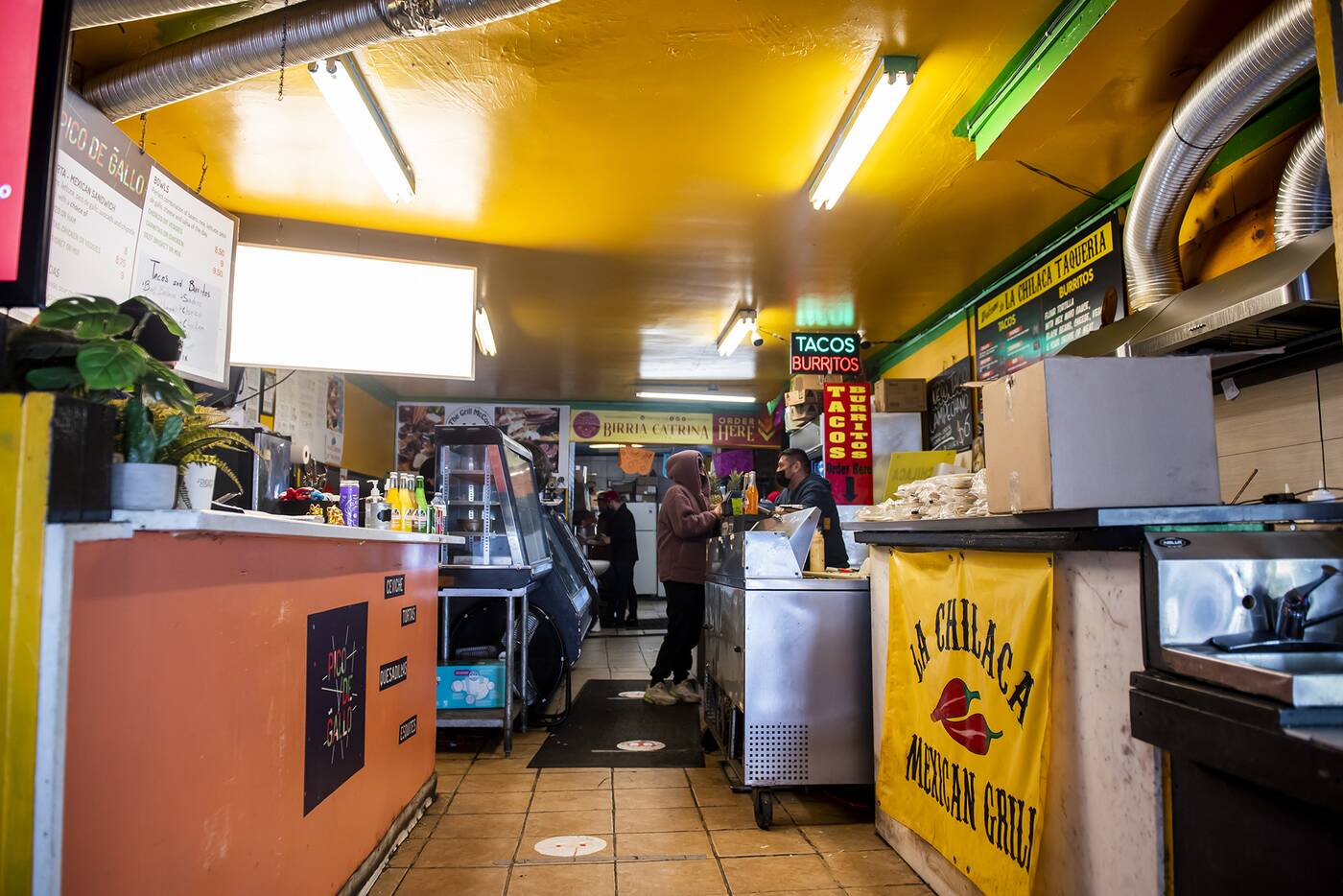 More than a handful of stalls have moved on from this narrow walkway to become full-fledged standalones.

There's the Chilean hot dog spot Completo, which has expanded with two locations since launching at 214 in 2012. La Chilaca’s outpost Taqueria Gus now has two successful stores, and, more recently, Casamiento has left the nest with a pupuseria of its own.

It's sort of like business boot camp: With limited resources, few places for staff to rest, and grill areas that span no more than 70 square feet per stall, entrepreneurs that can thrive in 214 Augusta are well-positioned to survive elsewhere. 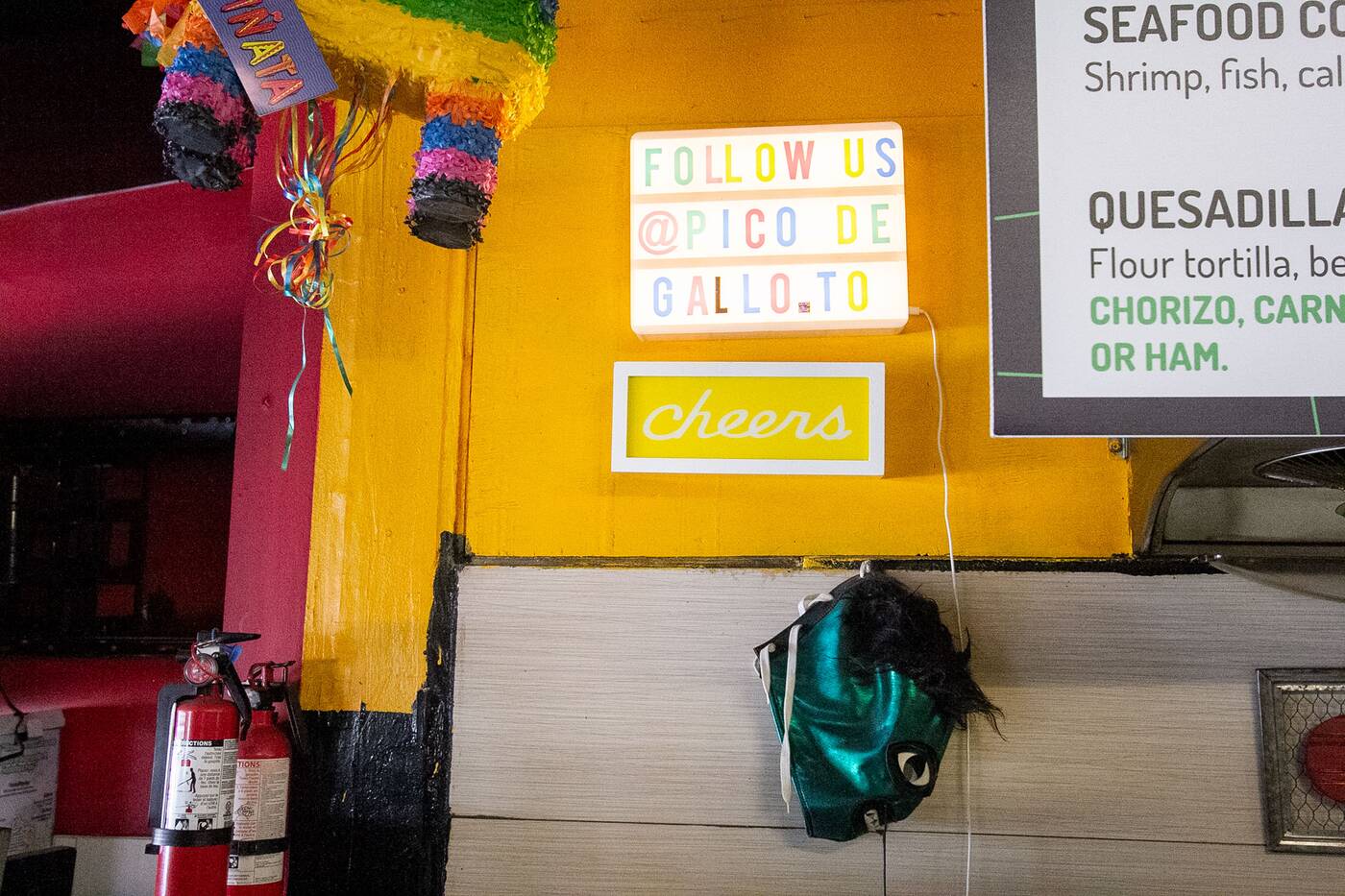 Many businesses have moved on from 214 Augusta to become standalone stores. Photo by Tanya Mok.

That being said, there's a sense of cultural camaraderie here that attracts both business owners and customers.

A no-compete rules means that there's a symbiotic separation of menus within the cuisine. That being said, if you're looking for a hodgepodge of South and Central American selections, the range of North York's Plaza Latina is unbeatable. 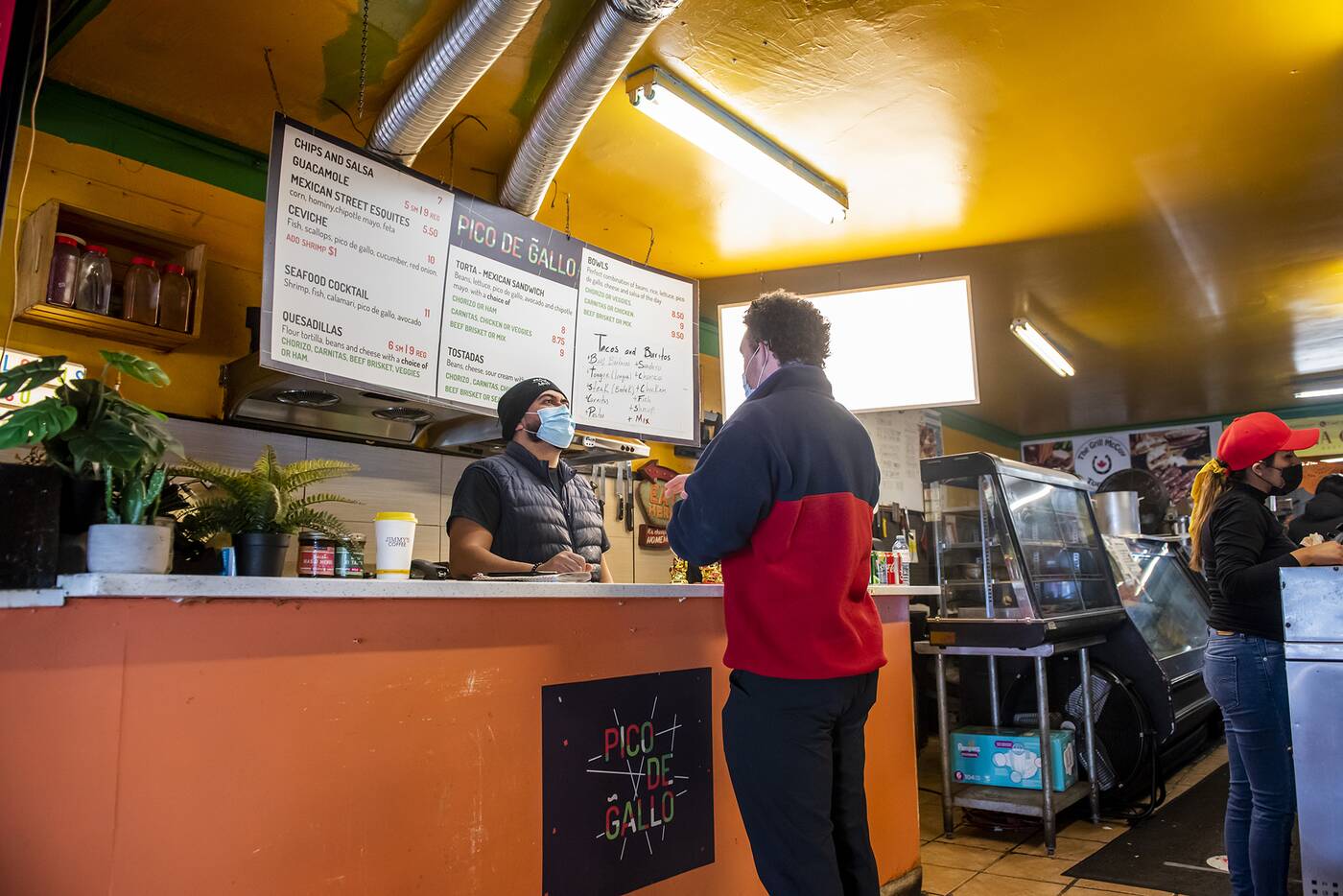 The food corridor started as the home of El Gordo before expanding to more stalls. Photo by Hector Vasquez.

It hasn't always been strictly Latin favourites here. Alongside the tacos and quesadillas, 214 Augusta has been home to other international fare like Korean at Kim's a la Cart and Kensington's first Persian restaurant, Ashpazkhoune. 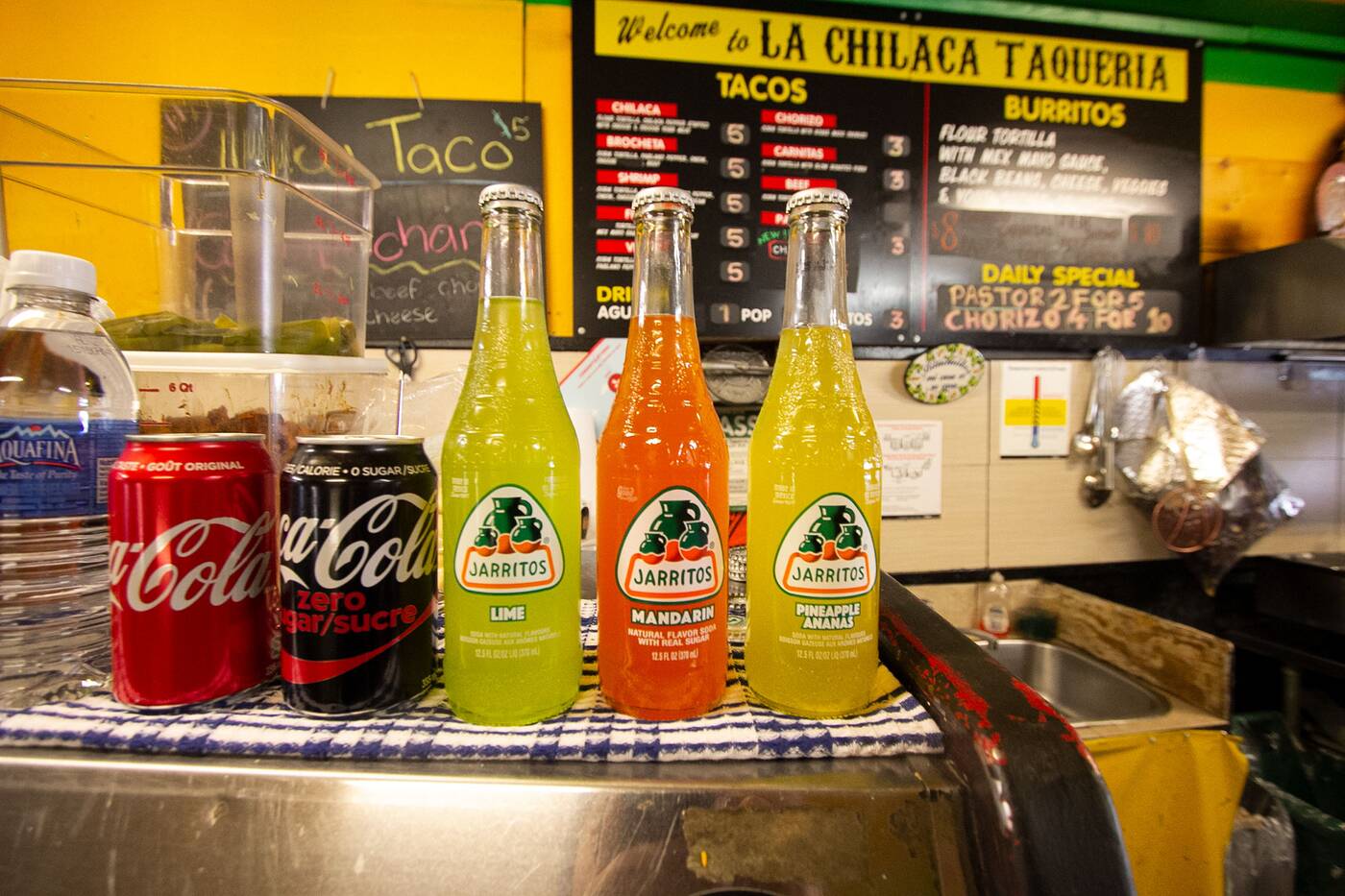 Those businesses, along with a handful of other Latin joints, didn't last long. Sitting in a small section of Augusta Avenue dubbed the Latin American quarter, the multi-national concept has proved too broad for the food court's little spaces. 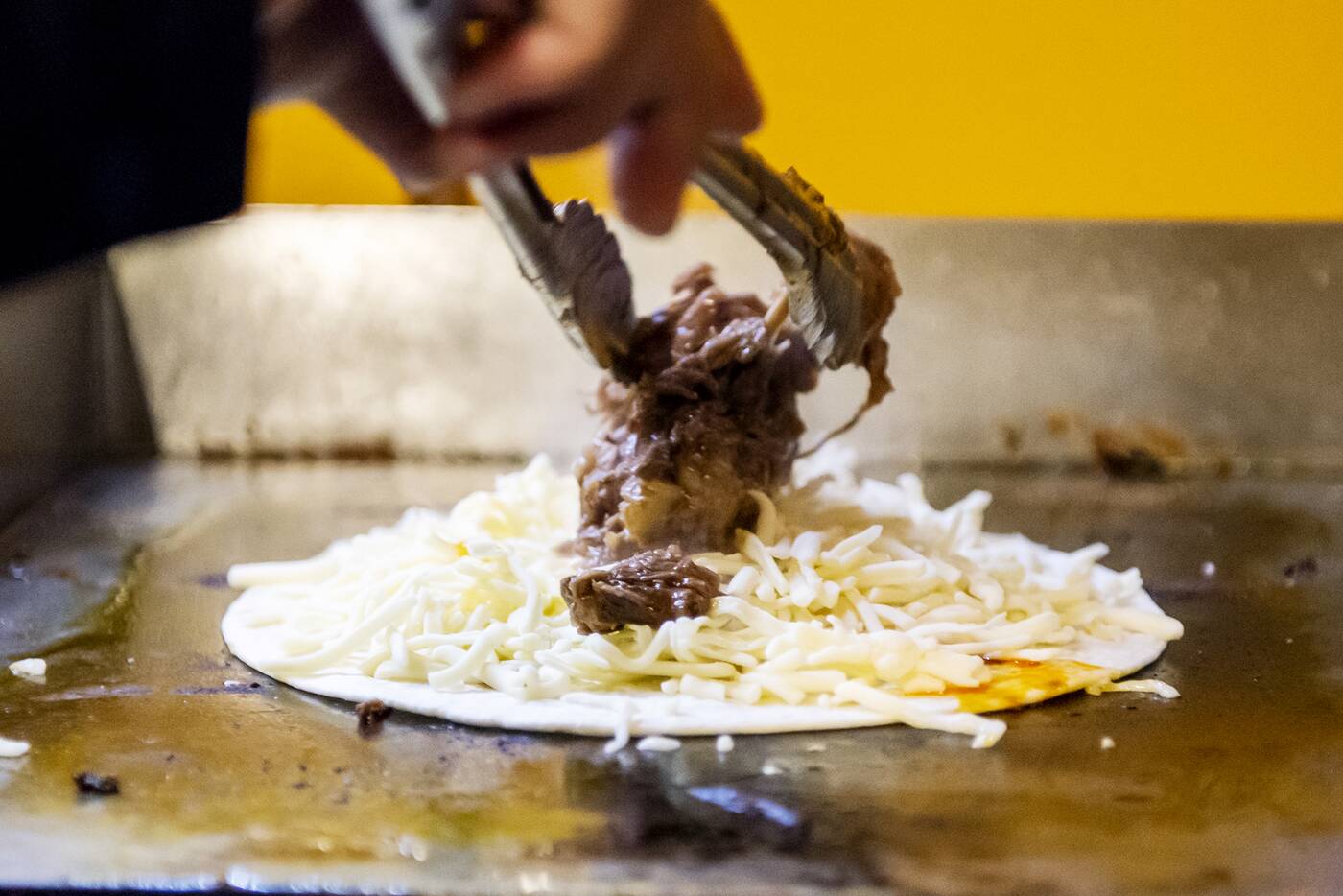 214 Augusta is one of the most interesting places in the city to grab a taco. Photo by Hector Vasquez.

According to Enoc Ramirez, who co-runs El Gordo Fine Foods with his cousin Alfonso Segovia (whose brother Leonardo owns Segovia Meat Market next door), 214 Augusta has found its strength in keeping the food options here regional, or at least continental.

"We experimented with a lot of different cultures," he says. "But everyone loves Mexican." 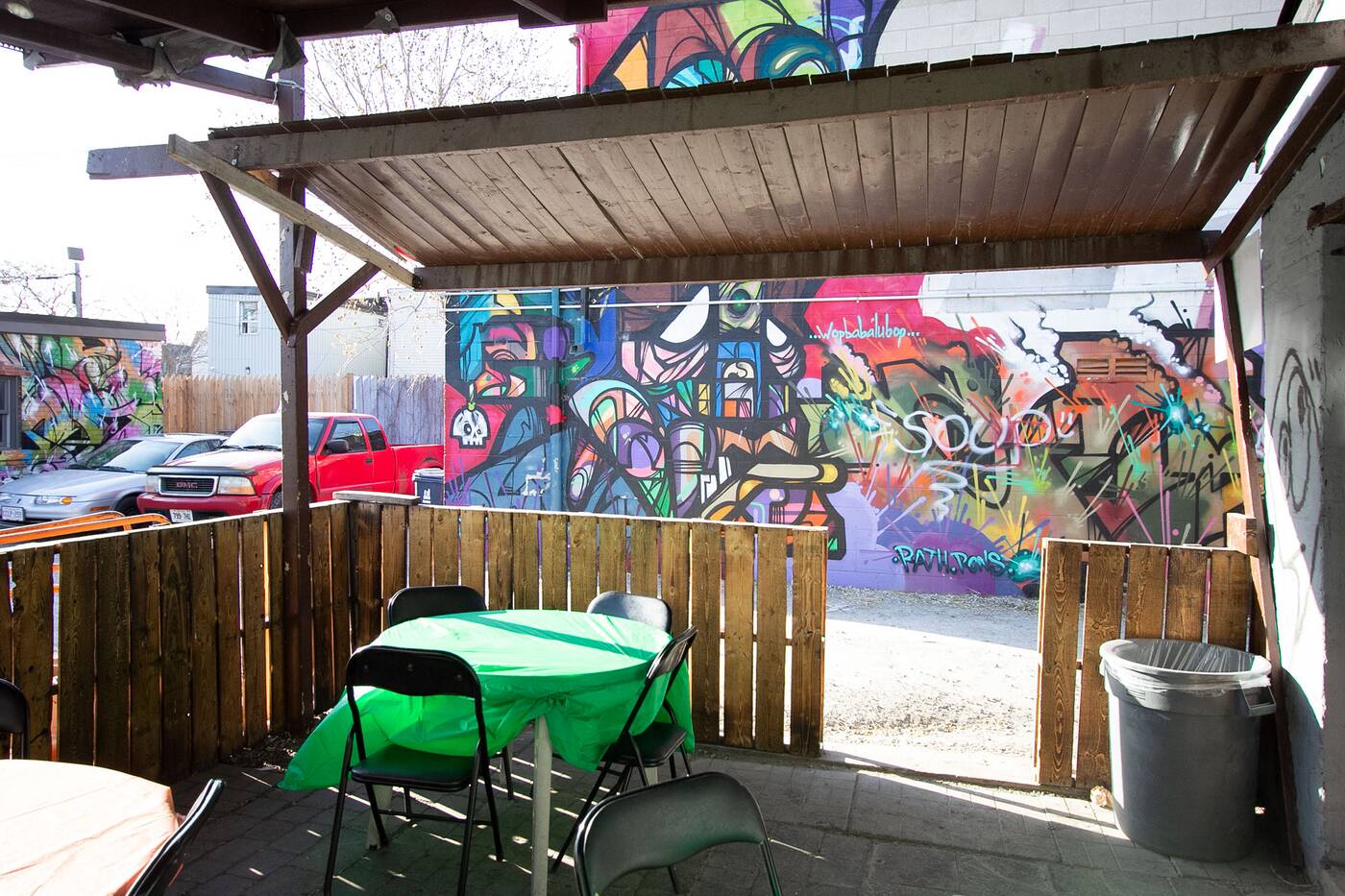 214 Augusta has a covered patio with enough room for social distancing. Photo by Tanya Mok.

Thanks to something I like to call the Kensington Market effect — which sees people flocking to their favourite haunts, regardless of the economic tribulations of the day — stalls at 214 Augusta say there's been a continuous stream of support from locals and first-timers alike, especially on weekends.

Luckily 214 Augusta has a back patio. It's covered and spacious enough to throw elbows while devouring drippy tacos. Just note that it's self-seated, so you’ll have to eyeball social distancing for yourself.

Here are all the businesses you can find in 214 Augusta. 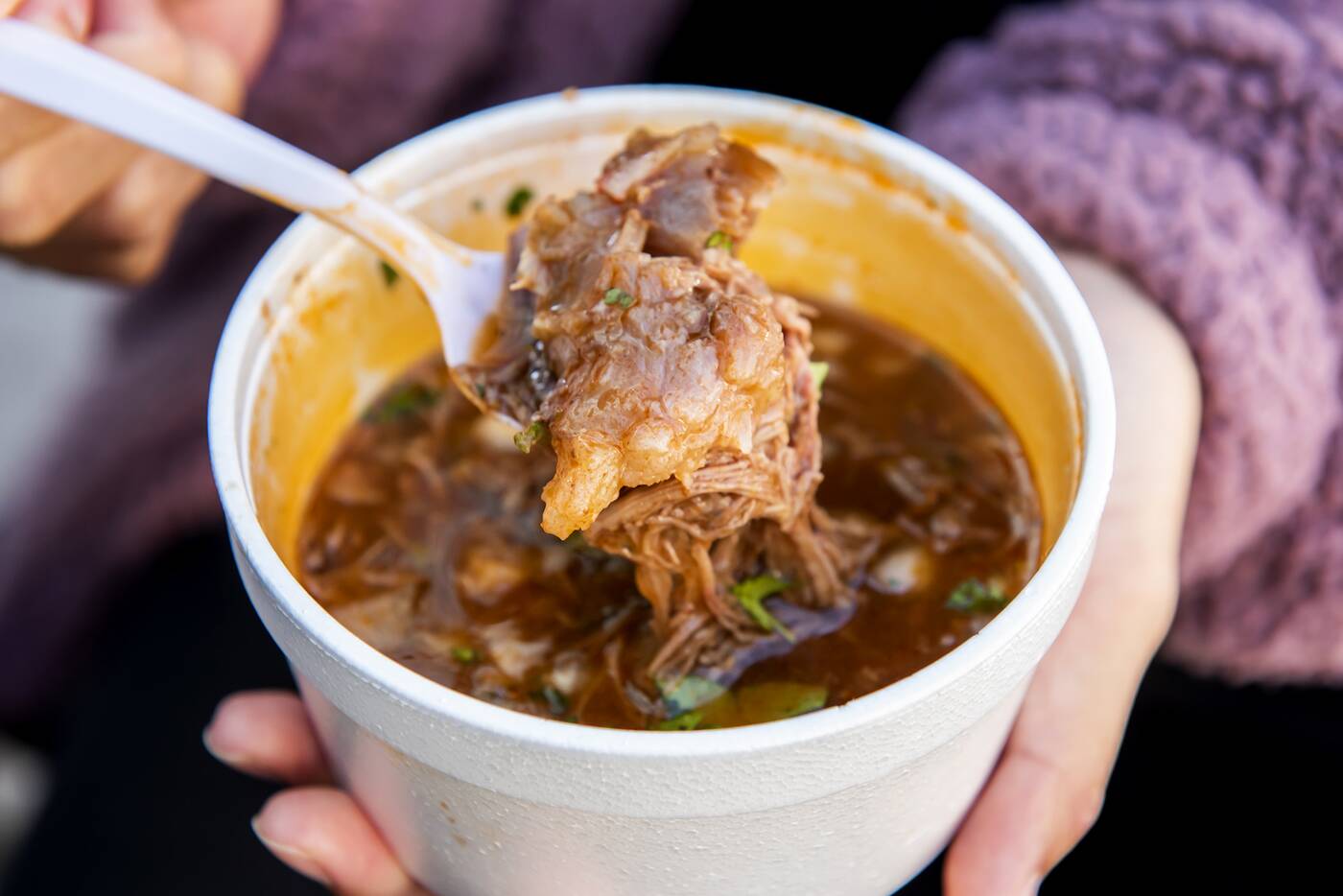 Birria Catrina opened up during lockdown and is the newest business to arrive at 214 Augusta. Photo by Hector Vasquez.

The newest arrival to 214 Augusta is this stall specializing in Jalisco-style stewed meats.

Owner Abraham Luna has been cooking birria for over a decade (his dad owns a birria spot in Jalisco), and you'll find him and his partner Lluvia Minton serving up this meaty dish at the back of 214.

He serves beef here, and though goat is the more traditional meat used, the former is just as popular these days in the streets of Jalisco, where birria joints abound. Make sure to dip your birria tacos in that deliciously fatty consommé. 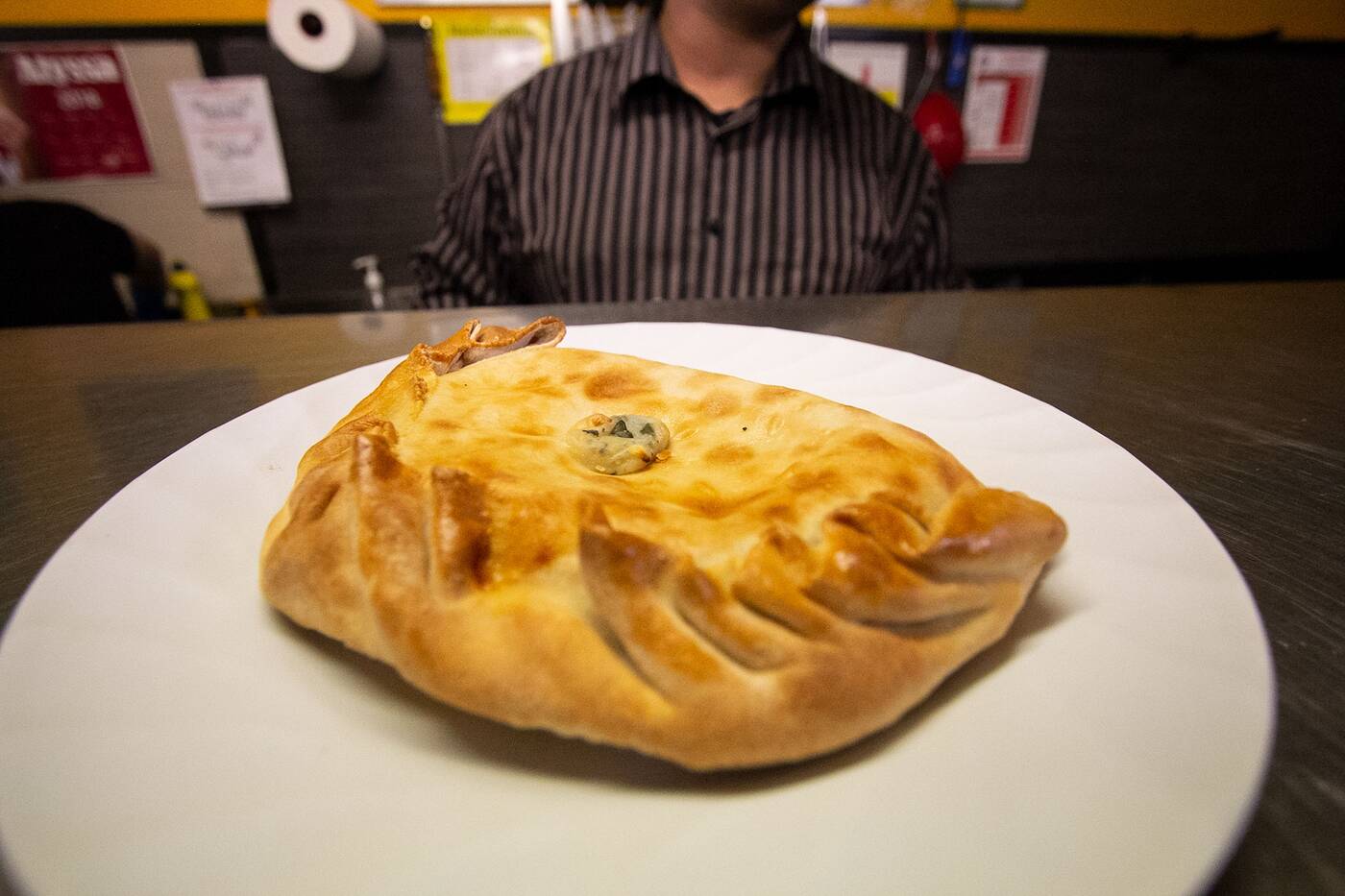 The empanadas at El Gordo come with over ten options of fillings. Photo by Tanya Mok.

There was a time when El Gordo Fine Foods was the only vendor selling out of 214 Augusta — until the empanada house got lonely and decided to open its doors to other businesses years ago.

The single offering at Gordo's is the Chilean empanada ($5 each), handmade and stuffed with 11 options ranging from classics like beef and cheese, or beef with olives and boiled egg. Find this stall up the small flight of steps, to the left. 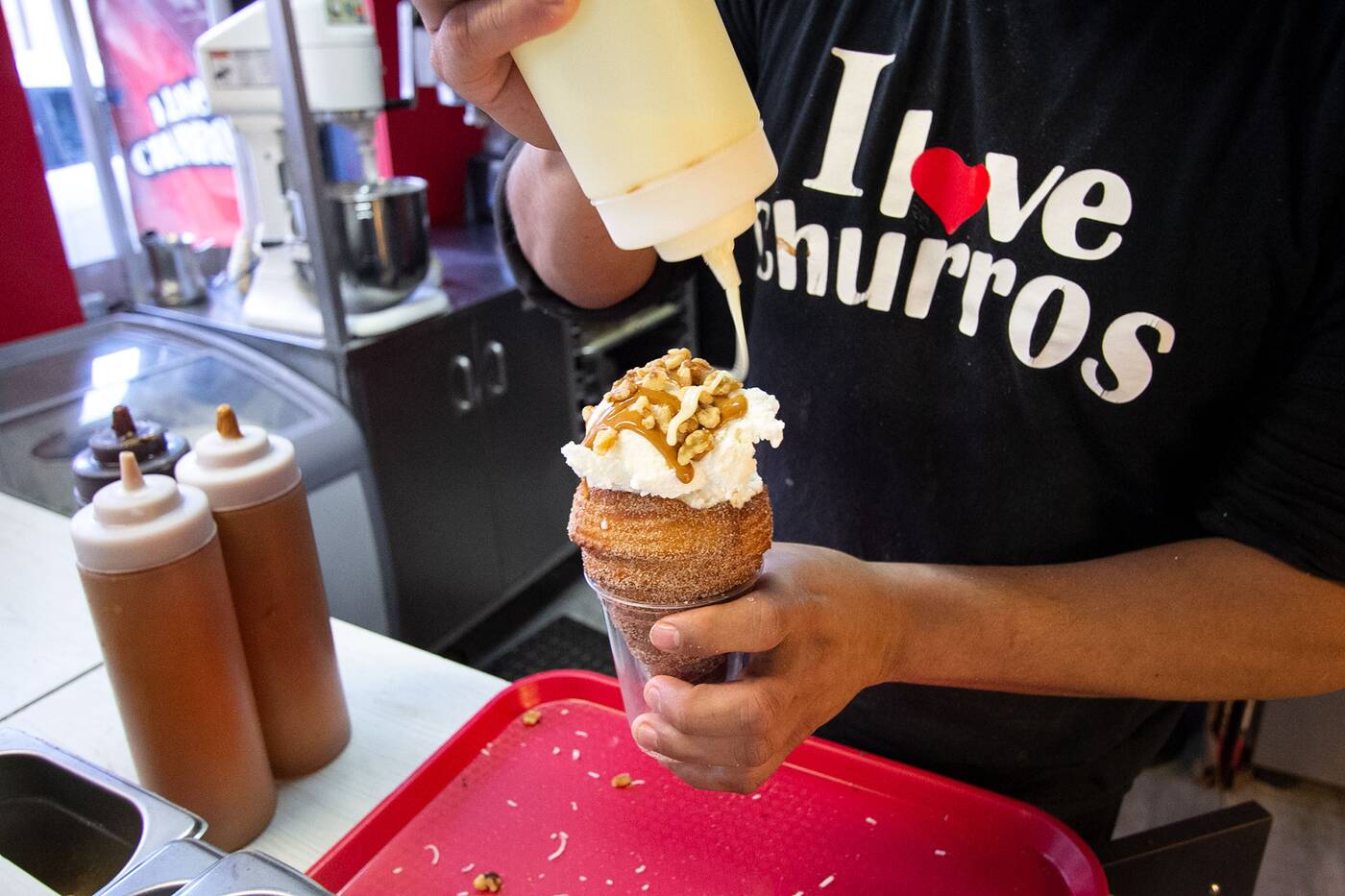 At Pancho's, churros are twisted into cones, coming with one or two scoops of ice cream and toppings. Photo by Tanya Mok.

These purveyors of churros make a killing here with storefront real estate right by the window.

Most days, you'll see Pancho behind the counter, where he and longtime staff member Victor serve up freshly fried churros: the crispy, sweet sticks of dough stuffed with your choice of fillings like dulce de leche or chocolate are three for $5.

These churros have made their way into the hands of Prime Minister Trudeau and the president of Germany. They can also be skillfully twisted into magical shapes like loops or cones topped with ice cream. 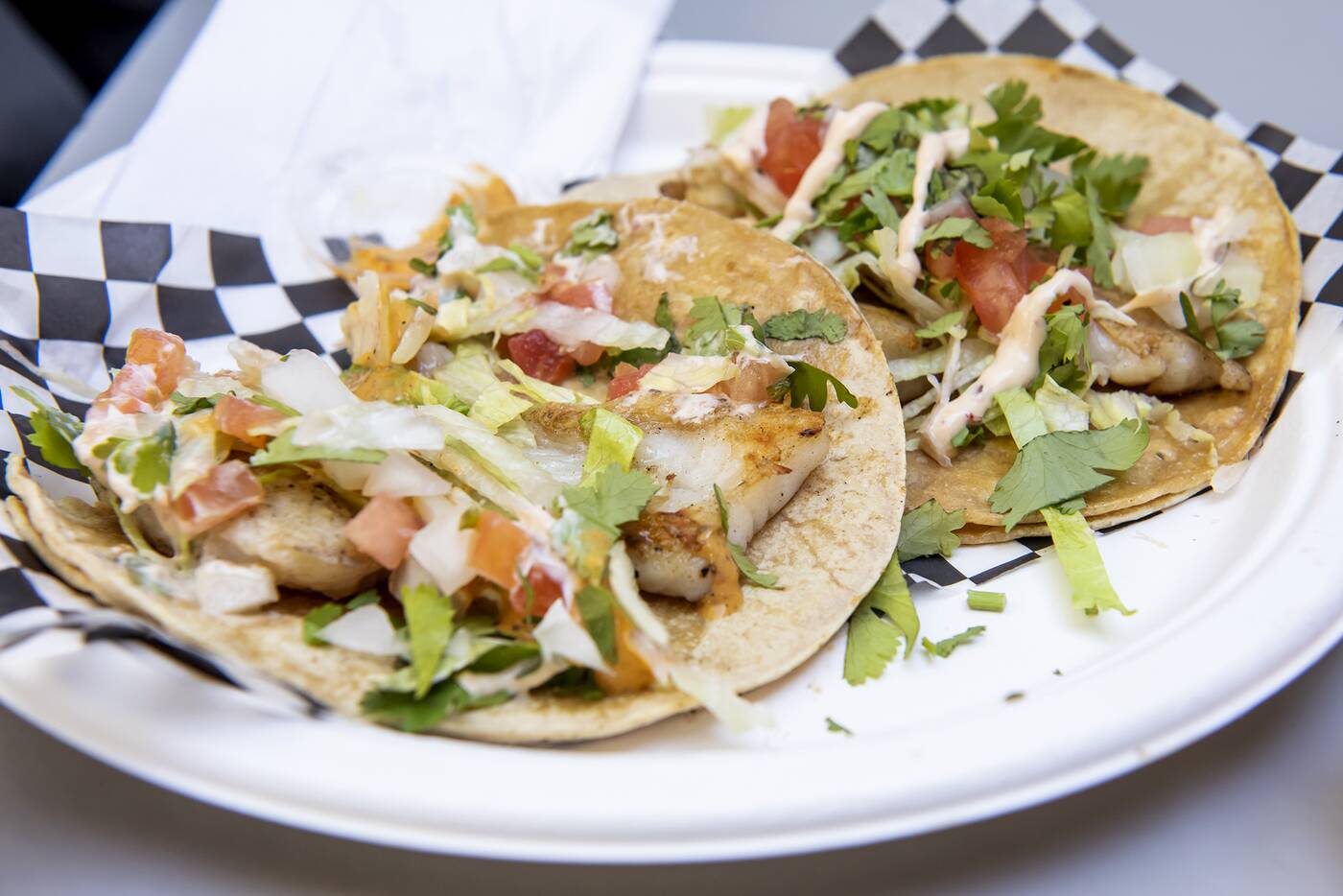 Traditional Mayan food is rare to find in Toronto, but Ko'ox Hana has a whole menu of it at 214 Augusta. Photo by Hector Vasquez.

Pork is a staple in the Mayan diet, hence why much of the menu at the food court's other front stall consists of grilled pork, which is pulled.

Here Lucy Novelo and her family specialize in Mayan home-cooked meals (one of few to do so in the city) like Pac Chuc, pork marinated in orange sauce. 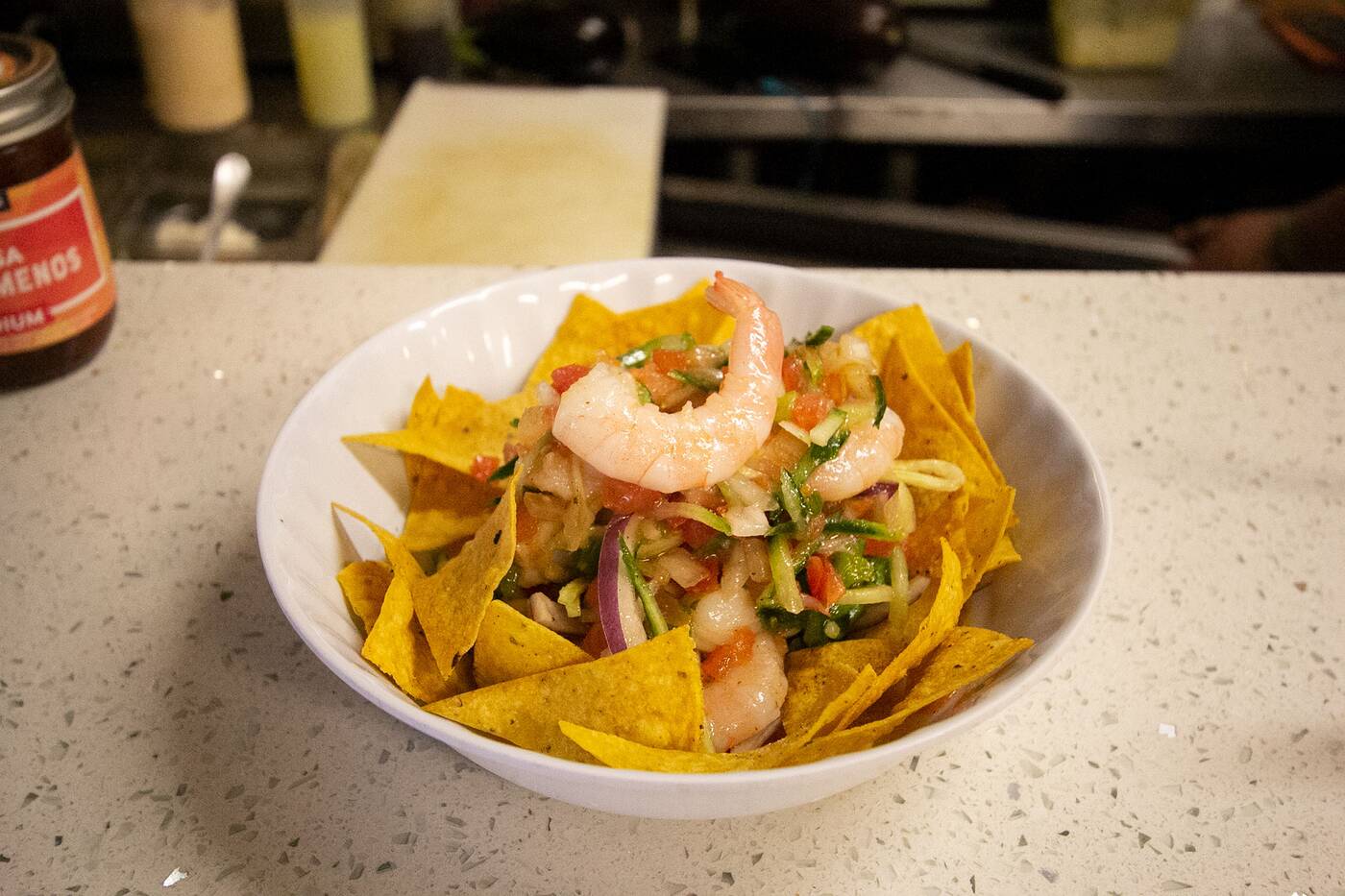 Perhaps the hippest option in this food court, this stall has more bowled foods than its counterparts. Traditional Mexican street foods like esquites (corn salad) and bowls of beans, rice and protein are available here, as are tortas and tostadas.

The standout here, however, might be the ceviche: the last thing you'd expect to be delicious in a crammed food court.

For $10 you get a bowl of delicious seafood and chips that surpasses other restaurant offerings. 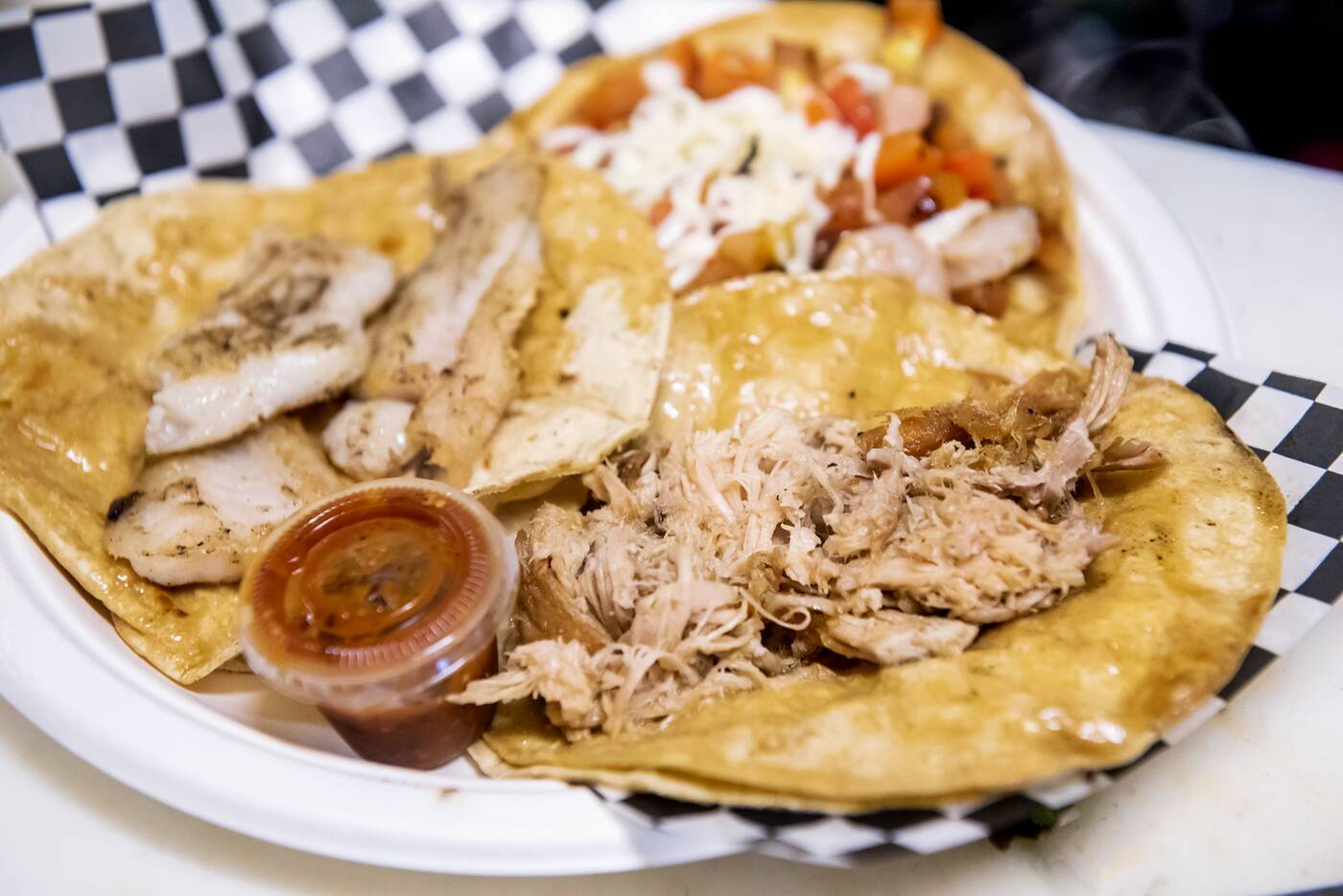 Tacos at La Chilaca Taqueria come in a box with lime wedges and are made fresh to order. Photo by Hector Vasquez.

Hailing from León, Augustine Morales brings a taste of his hometown to Kensington with a menu of burritos and tacos, most notably the chilaca taco ($5), a green pepper served on flour tortilla.

He's also launched Taqueria Gus further down Augusta. The taco spot has been doing gangbusters on weekends, so much so that he's opened a second location on Gladstone in a short amount of time.

Stuffed with cheese and your choice of meat, the chilaca isn't too spicy for anyone looking to try something new. Couple it with a bottle of your favourite Jarritos flavour and you have an ultimate takeaway snack.

Drake invests in notorious chicken joint with locations in Toronto