8 places to eat Cantonese Chinese food in the GTA

And so we come to Cantonese Chinese food. There's really nothing much that can be said about this cuisine that hasn't been said before. I find it interesting that Wikipedia's entry actually states that, in the Western world, Cantonese cuisine has become synonymous with Chinese cuisine, such is its popularity and ubiquity. While this claim might be a slight exaggeration, I actually find it a little difficult to disagree with.

I remember vividly that in the 1990's most authentic Chinese restaurants in Toronto (that is to say, those that aren't of the Manchu Wok variety) were either ones that served a great deal of Cantonese food or ones that were outright Cantonese restaurants themselves. I also recall somebody telling me that Toronto has one of the best offerings of Cantonese food outside of China and Hong Kong, and being a new immigrant at the time, I could see what they meant.

The large number of Cantonese restaurants in Toronto makes it difficult to compile a list that is anywhere resembling a comprehensive collection. As such, this article is more geared towards providing a little snapshot of the popular Cantonese places around town, and is not really meant to be a best-of or all-encompassing list or anything. It really would be difficult to achieve anything that ambitious. Look at this post as nice collection of good, solid, and well-established Cantonese places across the GTA.

One additional thing that needs to be emphasized is that Cantonese food isn't 100% synonymous with Hong Kong cuisine. While the people of Hong Kong speak the Cantonese language and undoubtedly contribute a great deal to shaping Cantonese cuisine, the food itself originates from the Guangdong region in China. As such, while there is a noticeable bent toward Hong Kong culture within Cantonese food, it doesn't mean that the two are completely interchangeable.

Here's a round-up of eight places to eat Cantonese Chinese food in the GTA.

Congee Wong (3235 Highway 7, Markham)
This restaurant chain has several locations and a menu more varied than toppings at a Marble Slab Creamery ice cream store. Congee Wong offers consistently yummy food for a very good price. It is quite easy to get a dinner for four for less than $50. Sure-fire crowd favourites are the Cantonese fried noodles (guang dong chao mian) as well as the fried turnip cakes (luo bo gao). The congee selection here is also very impressive and is a good way to balance out all the fried food. The restaurant is open late and is also a long-time favourite with locals for take-out. The downside is that the dining area does get unbelievably packed (even by Chinese restaurant standards) and the food can sometimes be a little oily. 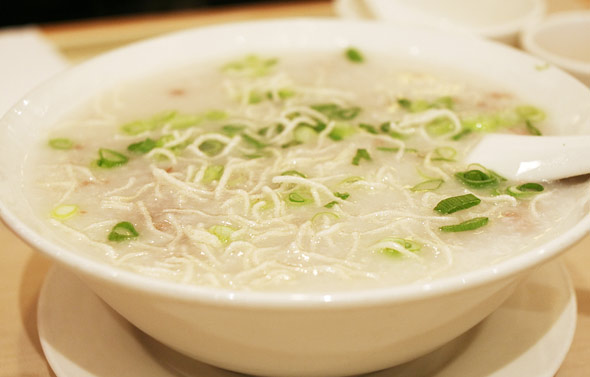 Congee Queen (895 Lawrence Avenue East, Don Mills)
Another congee restaurant with multiple locations. Crazily busy during mealtimes, this place offers a cacophony of (what else) congee with an extensive array of side dishes. The sliced fish congee here is quite lovely, as is any congee that contains preserved egg. Believe me, while this may sound a bit off-putting to the less adventurous types, your culinary courage will be rewarded. These dishes are popular for a reason, as ten billion people (give or take a few billion) can't be wrong. Also excellent are their crispy fried squid and the turnip cakes which some argue are better than the ones served at Congee Wong. Service is very quick and efficient, and they accept credit cards (woohoo!) too.

Congee Delight (3555 Don Mills Road, North York)
No, this list is not suffering from acute sequel-itis. There actually are a lot of restaurants around town with the name congee in them, and I haven't even begun to make a dent in this group. Definitely the least well-known of the Congee trilogy on this list, mostly because it only has one small location in a nondescript North York plaza. But this place serves congee that is arguably stronger in flavour than the previous two. While this may or may not be a sign that the food is less authentic, I personally love it. As far as congee goes, this place has less variety than its aforementioned big brothers on the list, but can totally hold its own. It offers a lot of lovely xiao cao, which is Chinese for snacks, which nicely complement your congee-eating experience. Of particular awesomeness is the fried dough (you tiao) with stuffed fish in it. Also, this place serves a dish called pork chop with thousand island sauce (which may or may not be Cantonese) which is just pure creamy deliciousness when mixed with steamed white rice. One area where this place comes up short is the fried squid, which tend to be a bit too chewy or hard for my liking. Stick with the Congee Queen variety for that dish.

Maple Yip (4227 Sheppard Ave E, Scarborough)
Located in a strip mall, this place has a look that can only generously be described as meh. Don't let that fool you though, the restaurant is unbelievably packed every mealtime. The decor and layout of the place may look really basic, but the food served is pretty magnificent. Two complex dishes that are favourites with regular customers are the Peking duck (I know I know, this one isn't strictly Cantonese food) and a boneless chicken stuffed with sticky rice. Service can be a bit curt, but in my experience that's usually because the place is jammed, and the servers are certainly never rude. Eating here really is a throwback, atmosphere-wise, to eating houses in Asia two to three decades ago, and it's pretty awesome in a chaotic sort of way. The food is tasty but not too overpowering. Quick side note: they have pigeon on the menu. It's definitely worth a try for those who are craving something a little different. 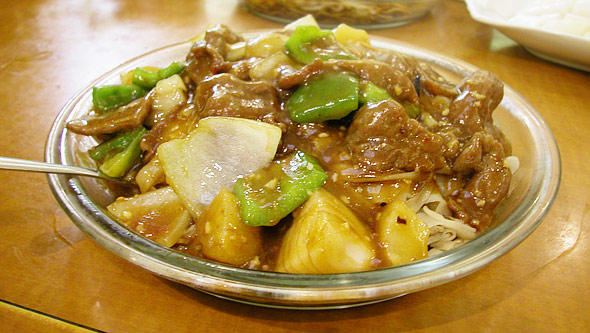 King's Noodle House (296 Spadina Ave, Toronto)
A long-time Chinatown favourite, this restaurant offers a cacophony of Cantonese dishes served to your table (and taken away again) in a blur of activity. Service here is fast and is sometimes hit-or-miss with regards to friendliness but if you're just hankerin' for some good ol' fashioned Chinese food in the heart of the city then it's hard to beat King's Noodle. While their array of noodle servings are nothing to scoff at, I find that the highlight here is their barbeque pork. Served either with rice or with their popular noodles, each slice of meat is tender and flavourful in ways that few Chinese restaurants can emulate. And then there's the price: a very respectable portion of the aforementioned bbq pork on a bed of noodles would cost you less than $8, and that pretty much seals the deal for me. As with many older Chinatown restaurants, the dĂŠcor is nothing to write home about, but UNlike typical Chinatown places, the bathrooms are quite clean and devoid of that funky smell that often permeates the dimly-lit basements of many of these establishments.

Sam Woo BBQ and Sam Woo Seafood (375 Bamburgh Circle and 325 Bamburgh Circle, Scarborough)
These restaurants are an absolute staple for Cantonese food lovers in northern Scarborough. I remember when I first saw this place, I had to do a double take because there are two varieties of this restaurant in the same plaza: one called Sam Woo BBQ and the other one called Sam Woo Seafood. I recall thinking, the food must be so awesome they couldn't contain it in one restaurant. The reality, alas, is not quite as fantastic as that, but the food is definitely consistently excellent and the service has actually gotten less grumpy over the years. The seafood place offers dim sum in the morning and the bbq one is where people go to get their barbeque pork (or duck) to take home with them. Definitely worth a try if you're in the area. 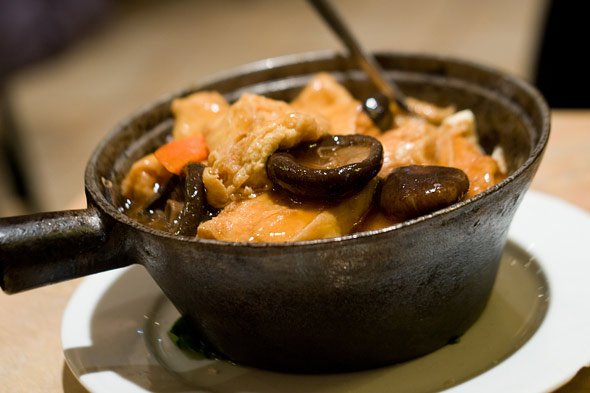 House of Gourmet (484 Dundas St W, Toronto)
Yet another one of the Chinatown restaurants that offer great food at awesome prices despite a pretty mediocre environment, this restaurant has also been around for at least a decade (if not more) and thus you know there's gotta be something behind it. Decor-wise, it's actually one of the better ones as it seems to have undergone a modern facelift, though that's still not enough to lift the typically chaotic dining atmosphere of the place. Still, that's not really the point here. What IS the point is their impressive assortment of congees, noodles, and rice noodles. I have tried many different variations of these three dishes, and have walked away impressed every time. Of course, this also means that their menu offerings are so extensive you'd think they're writing a sequel to War and Peace, but this (in my opinion) is a good thing because the general quality of their food doesn't suffer despite the large array of foods they serve. Additional note: their shrimp wontons are also excellent, but not as excellent as...

Jim Chai Kee (270 W Beaver Creek Rd, Richmond Hill)
This restaurant (if you can call it that) is awesome. Offering three types of dumplings/wontons to be paired with three types of noodles (I may be overestimating the numbers a little - no, seriously), this restaurant wins two awards hands down: the how fast can my food be served after ordering award and the these wontons are unbelievably cheap but so good award. The best part is how surreal the whole experience is. Because the menu items are extremely simple, you can come in, order, savour some delicious wontons, and be out the door after paying in around half an hour. Not that I would recommend that, as these heavenly shrimp dumplings are undoubtedly the best that I've ever tasted. Bonus fact: If you come when the owner is on duty, you're in for a treat as she will powerfully bellow out your orders to the kitchen staff at the back with a ferocity that makes you think she is marshaling an attack on a foreign nation. Very nice lady though, so don't get intimidated, and just enjoy the auditory experience.