Where to eat and drink in and around York University

Whenever I'm at York University's Keele campus and hunger or thirst suddenly strikes, my first consideration is always of which bus will get me home fastest. Sorry York, ubiquitous power lines, homogenous buildings, and excessive Tim Hortons outlets seduce the downtown elite in me to rear its ugly head. But York students and area locals know there are a few spots that can certainly ameliorate a trip to Finch and Keele (there I go again..) and make a day on campus a little more satiating, if nothing else. Here are some spots to eat and drink in and around York University.

Falafel Hut
In York Lanes (York University's own little mini-mall) Falafel Hut reigns supreme for all things falafel, shawarma, and Middle Eastern grill. While the consensus may be split on this place (people either love or hate it) it's hard to deny the late-night lineups for Falafel Hut's grub. It's usually a winner during exam season, open to or past midnight several days a week.

Oishi Sushi
We all know that if you can use a fork you can go to York, but does the same apply for chopsticks? (Let's hope so, for enrollment numbers.) Oishi Sushi is close enough to the York campus to serve as a favourite for sit-down Japanese and Chinese cuisine, and it doesn't hurt that York students are offered 10% off their final bill (though just for dinner). All-you-can-eat sushi during lunch at Oishi is also a budget-friendly $9.99. 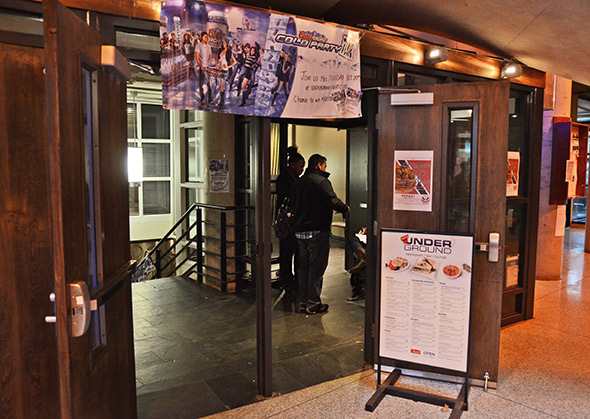 Underground
The main York spot for major nightclub events and the like, there are actually some decent eats to be had at the Underground during the day. With its own executive chef, the Underground offers main dishes such as grilled teriyaki salmon, spinach and ricotta stuffed pasta, and 8oz sirloin steaks. Of course, you can also get your nachos, chicken fingers and fries, and burgers here too 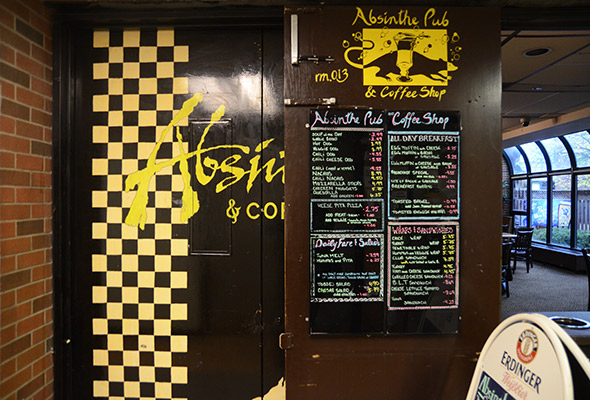 Absinthe Pub and Coffee Shop
More a pub, really, than a coffee shop, Absinthe is the last of the student-owned and operated. In the basement of Winters College, the Ab (as it is known by local patrons) offers all of the standard pub fare at pretty decent prices, as well as baked goods, salads, wraps, and milkshakes. This is the place of dart tournaments and theatre majors on their third pints.

Thai Bamboo
Perhaps a bit far to walk but only a short drive from campus, Thai Bamboo at Steeles and Keele has a stellar reputation. That's probably why the wait during lunch can be nearly impossible. Pad thai and curries are the main attractions here, dolled out in generous portions at reasonable price points.

Bamiyan Kabob
Bamiyan Kabob has several locations throughout the GTA, and lucky York students have one right by campus. The prospect of beef tenderloin marinated in spices for 24 hours might motivate one to sit through class--or else, seduce a little hunger-related hooky.

Grad Lounge/Cafe
Would you like an explanation of the socioeconomic benefits of shade-grown coffee with that cup? You can probably get that here. The Grad Lounge on the York campus is one of the few places in the area to get a cup of fair trade coffee, as well as dishes that have a little more to them than the typical fingers 'n fries. Chana wraps, vegan chili, stuffed bell peppers and quiche are just a few of the offerings at the Grad Lounge, as well as wraps that are ready to go, cookies, and other snacks. 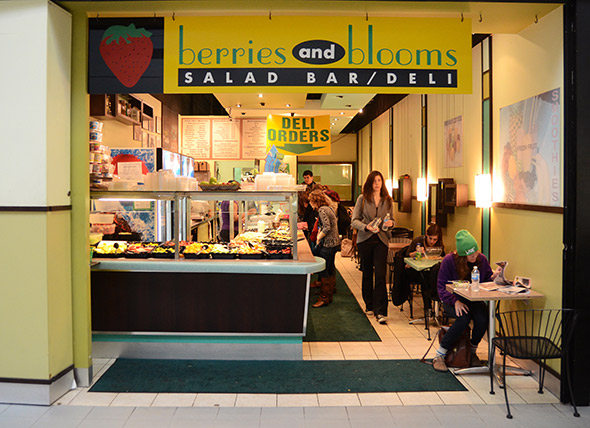 Berries and Blooms
Berries and Blooms is a haven from the over-processed, beige-coloured foods normally found in abundance on campus. The York Lanes restaurant and catering company offers smoothies on the cheap, as well as fresh (key word) fruits and vegetables, salads, and sandwiches. In short; no beer batter here. 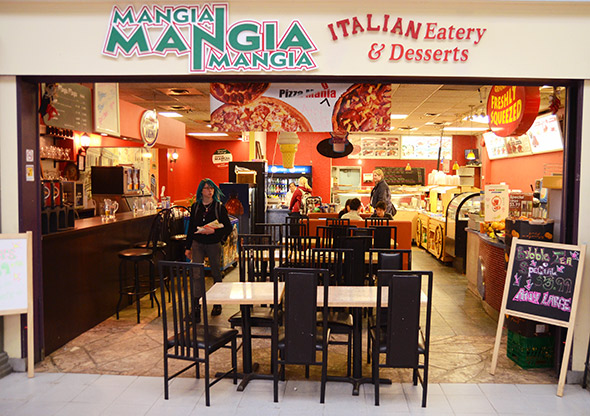 Mangia Mangia Italian Eatery
Another York Lanes spot, Mangia Mangia doesn't look like much, though it offers the best Italian you'll likely find in or around York University. While I've only had the pleasure of tasting its pasta, Mangia Mangia makes pizzas, salads and espresso drinks, and even features its own juice bar. Almost good enough to make you forget you're on barren land.

What did I miss? Add your favourite spots to eat in and around York University to the comments below.