Back in the 1990s, Queen and John was the epicentre of youth counterculture. The corner, anchored by MuchMusic, was the place a small town teenager might want to visit on a trip to the big city.

Of course, this is long before wide spread file sharing, mp3s, social networks and Moses Znaimer's departure from the station. Since that time, MuchMusic's influence has waned as they followed MTV's lead and distanced themselves from actual music in favour of teenager-heavy reality TV. And as the Nation's Music Station lost it's grip on the counterculture, the neighbourhood kind of distanced itself from the station. No longer is 299 Queen Street West the key attraction on John Street. That title shifted to the Scotia Bank Theatre ages ago and has now changed hands again with the arrival of the TIFF Bell Lightbox. This scruffy neighbourhood that used to be full of punks and ravers is now full of restaurants, tourists, bookstores, and, yup, patios.

Today's patio is a recent addition to the neighbourhood. Town Crier takes over where The Fat Belgian left off, changing very little, but providing a little oasis on a street that got called up to the majors a few years ago, but is still finding its footing. 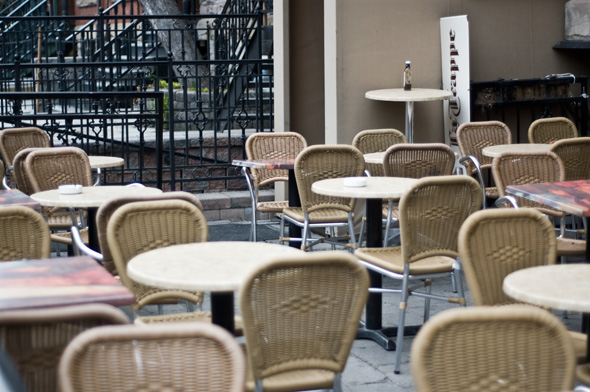 Who goes there?
Condo dwellers, office folk on lunch, men and women of leisure, couples killing time until their movie begins. Anyone â or anyone, so long as there is sun. They disappear when the clouds come out, sort of like moths.

Grub and Libations
Little has changed since its days as the Fat Belgian; the menu still consists of bar food through a European lens. While you can find things like burgers and club sandwiches, you're better off with the moules et frites ($13.00), or maybe some pork schnitzel ($13.95) along with one of their 50+ beers to choose from.

The selection is heavy on Belgian and Dutch trappiste beers with some German, British, Austrian and even a few French brews to round things out. Most will be familiar to those already immersed in beer culture, but there are some excellent choices nonetheless. Try the La Trappe Tripel ($5.75) for a decent benchmark on abbey ales, a strong beer with a hint of orange peel.

A view to a...
Mostly what you'll see is hoards of people as they hustle up and down the sidewalks: kids, adults, young, old, all types. But beyond the crowds, the area is lined with more restaurants and entertainment facilities, towers, vacant lots and repurposed buildings. I saw a Lamborghini cruise by during my visit too â I think that's new since the Znaimer years. 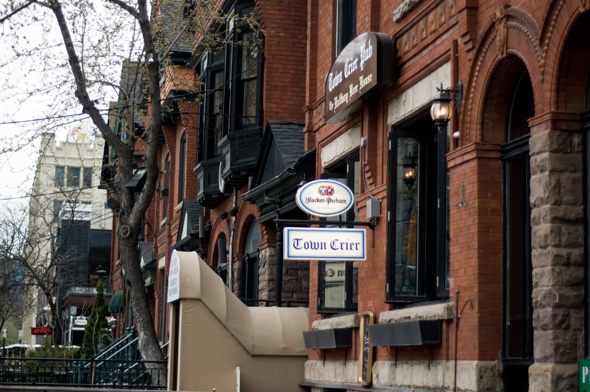 Odds of scoring a seat.
That depends on how dedicated you are, I already spotted a lineup here on an afternoon last week when Mother Nature was cooperating. But like I said, it all depends on weather. The thing is, this place is small, and even through they cram the chairs in as much as possible, it's still going to fill up fast. But there are lots of options around, if you can't get onto Town Criers patio, you can always get yourself a Jackarita next door.

SPF Recommended
And why does it fill up so fast? Oh I don't know, perhaps because it's a west-facing patio in the Entertainment district? If there is sun to be had, you'll find it here. And with no awnings, umbrellas or greenery whatsoever, it can get hot.

Overall Impressions
Truthfully, this is perhaps the best patio in the area, if only because the surrounding restaurants are a cornucopia of corporate suck. You know, places like Hooters and Jack Astors where you'll find smarmy managers and first year university students dressed in obnoxiously revealing clothing and fake-flirt with customers to try and "jack up" your beverage--no thanks.

Town Crier feels a bit more comfortable, looser and more natural; a place looking for your patronage, not just your credit card.