Inside the new Green Room

The Green Room is closed again.

As it turns out, the latest iteration of the cafe/bar was never authorized by Municipal Licensing and Standards to reopen in the first place. Although a new application for a license was made by 1836551 Ontario Ltd., "Green Room Cafe" will have to face a Toronto Licensing Tribunal if it hopes to open. "The current status of this application is refused based on concerns stemming from City of Toronto investigations. The refusal letter was issued on February 22nd, 2011 and mailed on February 23rd, 2011. The applicant has until March 24th, 2011 to request a hearing before the Toronto Licensing Tribunal," explains Bruce Hawkins of ML&S.

Although it seems strange to me that a restaurant without a license would be inspected by Toronto Public Health (TPH), apparently this was all a part of the re-application process. "The first inspection resulted in a Conditional Pass, and this info was provided to ML&S as a condition of licensing for the new owner," wrote TPH media representative Ahmad Saidullah in response to my inquires.

But despite the fact that the business has reapplied for a license, that doesn't mean that they can legally operate during this process. "The Green Room does not have a license. They were not legally allowed to open at any point," Hawkins confirms.

Calls to the Green Room earlier today met with the same answering message I first encountered on the Sunday the 20th. I thus have no explanation as to why ownership believed it was authorized to open its doors, if indeed it did.

I did, however, speak with the Green Room's assistant manager, Ryan. He tells me that the restaurant ceased operating following the long weekend, but that management has yet to receive the letter from ML&S mentioned above. He claims he has "more insight" into the latest chapter in the Green Room saga, "but is not in a position to discuss it at this time." I'm not sure what exactly that means, of course, but when asked if ownership and management believed they were to receive a new license, he's was quite animated in his confirmation that this was the case.

The staff at the Green Room "are all very disappointed in this latest development," he admits. I have to say that I also feel sorry for them. I'm not sure if I fully made this clear in my original article, but each of the servers I spoke to on the evening that I paid my visit were enthusiastic and forthcoming about the relaunch, an attitude that was not shared by Jessie Tong and the mystery person downstairs. It's a shame that they're once again out of work.

If and when more information comes to light, I'll again update this article.

In the process of inquiring about how the Green Room was able to re-acquire its license, I've discovered that my initial suspicions about the re-launch were well grounded. Although I don't have all the specifics quite yet, in an email exchange with Bruce Hawkins at Municipal Licensing Standards, he revealed that "there is currently no valid license for the business. If open, it is operating contrary to the City's by-laws. A new application has been made, but the application process is not yet complete."

The new Green Room looks a lot like the old Green Room - and determining the extent of the difference between its latest iteration and the restaurant that was shut down last September is not completely possible on this, a long weekend. But as a new chapter begins in a story that will likely continue to have contested versions, I was at least keen to pay the place a visit to get whatever information I could about its reopening.

Having spoken to an unnamed employee at around 3 p.m., I strolled over just before it was supposed to open in the hopes that there might me someone to talk to. There was -- in fact, a number of restaurant staff were on hand, including the person who would eventually identify herself as the new owner. 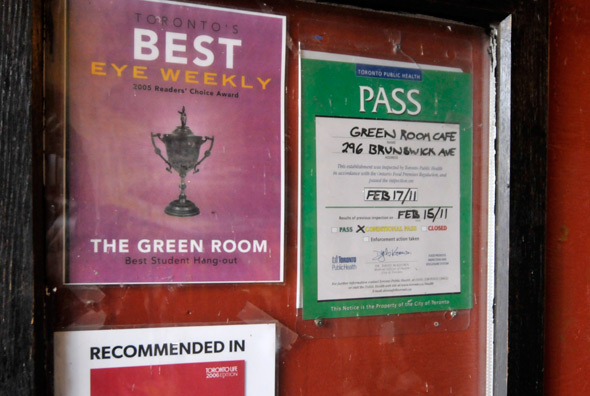 Upon entrance, I inquired if it'd be possible to ask a few questions about the re-launch, which met with the not altogether surprising response, "that depends on what type of questions." Doing my best not to look sinister, I explained that, more than anything, I was hoping to take some photographs of the new interior. This prompted a potentially revealing deliberation. A women who identified herself as the manager first asked if I'd be willing to come back next week. When I responded that now was the perfect time given that the restaurant was both tidy and unoccupied, she seemed to start to change her mind.

It helped that the first staff member I encountered (he of the "that depends on what type of questions" response) was rather encouraging of the idea. As it turns out, his name is Ryan, and he's the new assistant manager of the Green Room. But despite his enthusiasm, the manager still wasn't fully convinced. Appearing both nervous and suspicious, she asked if I could wait for a moment and then headed downstairs. She then returned a minute later to ask for my business card. Apparently I passed the test, because a few minutes later she reappeared and introduced herself as Jessie Tong. Who she spoke to downstairs was never revealed. 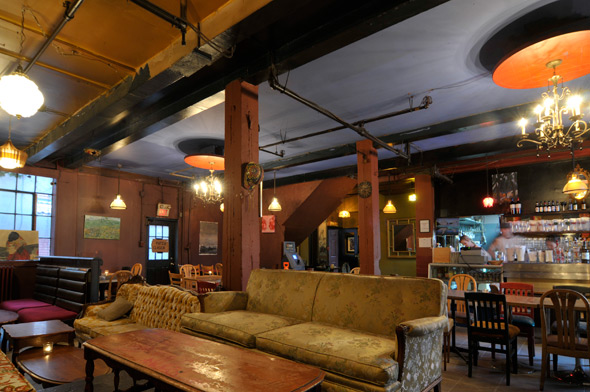 After ensuring that she wouldn't have to pay for the photographs, Tong opened up a bit and was willing to answer a few questions. First I confirmed the stuff I already knew: the restaurant reopened Friday, will continue to operate seven days a week, and has undergone some renovations. It was at this point that it got interesting. When asked if the Green Room was also under new ownership, Tong responded that she was the new owner. Given her two visits downstairs and the murkiness that's surrounded the ownership of establishment in the past, this is unfortunately not a claim that I can believe without corroboration.

On the other hand, it's worth stressing that I also have no evidence aside from the restaurant's past to suggest otherwise. With Municipal Licensing and Standards closed until Tuesday, definitive answers about the ownership situation and how the restaurant has managed to reopen will have to wait. 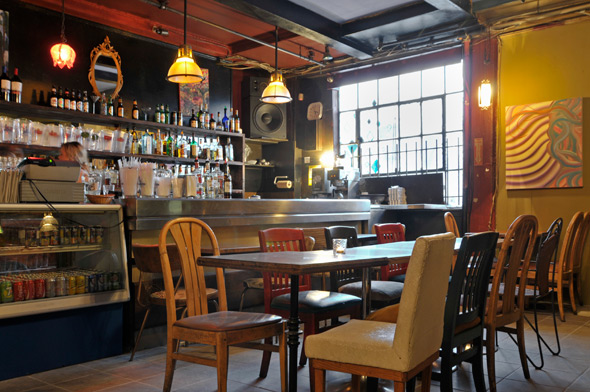 As Tong and I continued to chat, her responses became decidedly less specific. When asked when she acquired the business, she responded "a couple of months ago." After further prodding, she noted that it was "all this year," which I took to mean both her putative acquisition of the business and its renovation. But given that the centrepiece of these renovations appears to be a new floor -- which was reportedly already installed when last autumn's tribunal took place (see last link) -- it's again impossible not to doubt Tong's responses.

At one point, I ask her if she'd like to account for the various changes she and her staff have made to ensure that the restaurant doesn't have the same problems with DineSafe inspections its had in the past. She doesn't want to do this. In fact, what she's most interested in establishing is that Green Room hasn't changed. At first this confuses me. Why in the world would anyone working at this restaurant not want to distance it from its checkered past, I wonder. But Tong offers the most convincing response of our chat when she says that she'd like people to "feel that they can come home" to the Green Room. There's new ownership, she repeats, but she doesn't want to change the place too much. 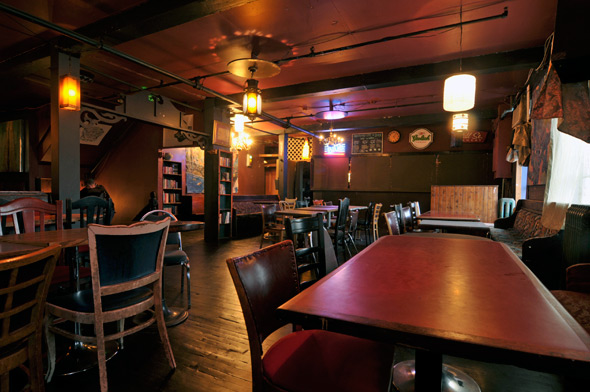 Some may scoff at this attitude or accuse Tong of being completely out of touch, but after considering her reasoning for a moment, I acquire a certain understanding of this nostalgic branding strategy. I've always thought the Green Room would be a great bar if it could just get its act together as far as health violations go. But, lest I be too idealistic, the fact of the matter is that for years the restaurant's ownership demonstrated no ability to do so.

Is this set to change?

Well, the Green Room is not off to the best start. When first inspected this time around (on February 15th), it was again guilty of a number of infractions, including inadequate pest control. This is anything but auspicious, and yet it's also important to note that despite the infractions, the restaurant did receive a conditional pass.

As I walk around taking photographs, I chat with employees who helpfully turn on lights in the areas I'm working. One of these people is the aforementioned assistant manager, Ryan. New to the position but familiar to the Green Room (he did some handiwork for the bar in the past), he speaks with an obvious conviction about the future. Although initially hesitant to talk about the ownership situation, he argues that the past problems "were all about philosophy. There is new ownership, yes...but there were problems in the past despite ownership changes. It's a new philosophy that'll keep us from being closed."

I want to believe him. I want to believe that the Green Room has new ownership with a new attitude. This is a place where I used to spend a lot of time, and I have fond memories here. But my visit just doesn't leave me feeling like I'm being told the whole story. For that we'll have to wait until the City of Toronto offices open up on Tuesday. 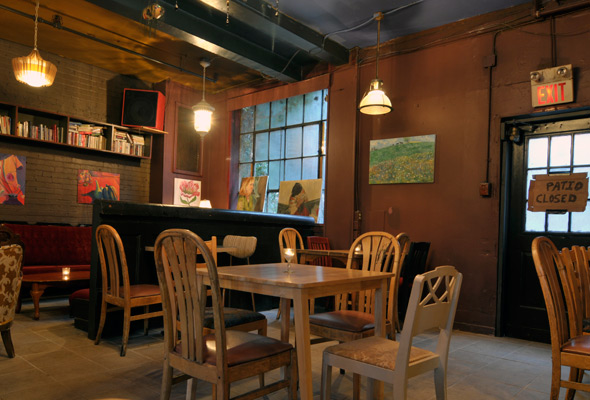 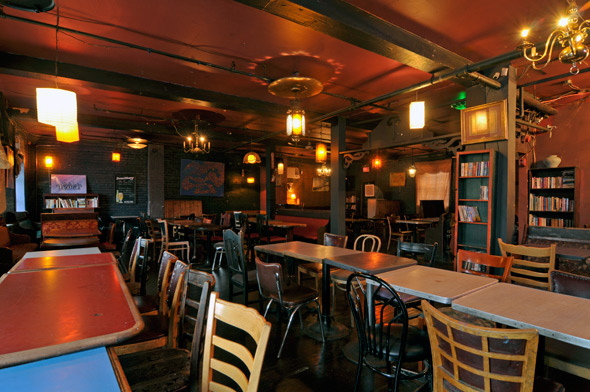 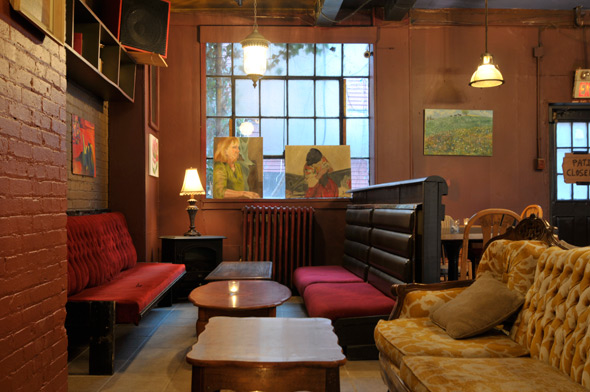 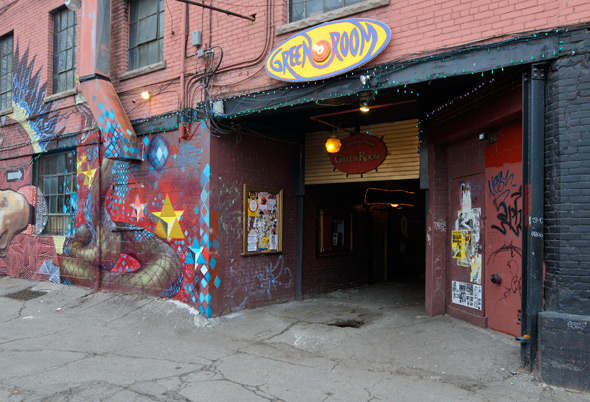