What do you get when you mix smutty writing and extreme cupcake enthusiasm? You get Rachel Bussel (renowned erotica author and cupcake connoisseur), who was recently in Toronto promoting all of sex, sugar highs and buttercream frosting.

Over the past weekend Ms. Bussel hosted both a 'cakehead' meetup at the Drake and a writers' workshop at sex shop institution Come As You Are.

Surrounded by the best toys and tools of the trade at Come As You Are on Monday night, Rachel gave 12 erotica writing hopefuls the run down on how to be successful in the business... while sharing cupcakes from Babycake and Sweet Escape Patisserie. 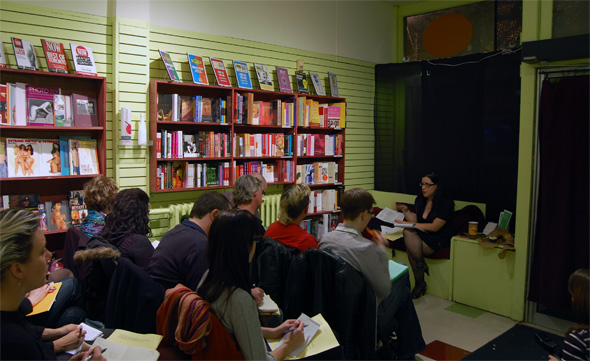 After talking about her own experiences breaking onto the erotica scene, Rachel put the group through a series of writing drills. The drills consisted of 5-minute writing intervals on a specific theme.

After a seemingly easy start with a chair theme, she moved on to food. One writer shared a scene where a couple prowled a supermarket and ended up making good use of a salami. Another contrasted a locavore's love of pure and healthy eating with their conflicting lust for things more hedonistic.

Other themes included Toronto landmarks, sex toys and love letters. The love letter theme was prefaced by a very interesting and cheeky reading of a letter dated in 1909, from James Joyce (author of famed novel Ulysses) to his wife. 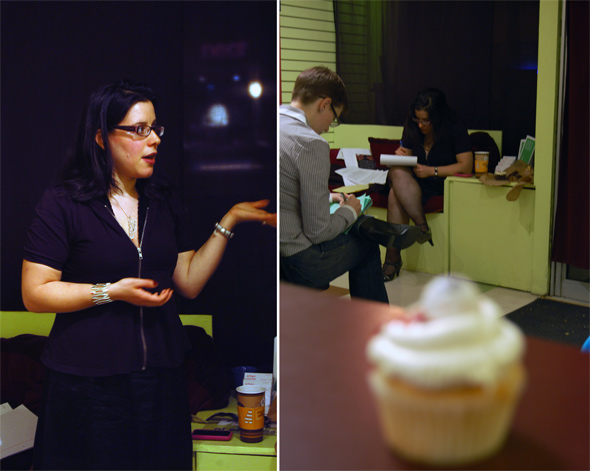 Why pair erotica with cupcakes? Read into it what you will - Rachel claims that cupcakes are her "G-rated hobby." She is the founding contributing editor of Cupcakes Take The Cake, a well-known blog about all things cup and all things cake.

So while she was here over the weekend she just had to get herself some of Toronto's goods. She claims Toronto is a little "cupcake crazy" and I would tend to agree. While the scene is still infantile as compared to her hometown NYC (there are mobile cupcake trucks that now prowl the city there), cupcake shops have been hotly debated and popping up all over the city.

She stopped in at Sweet Escapes Patisserie in the Distillery District and Babycake (housed within Lil' Baci) in Leslieville. She even found cupcake soaps at Tval Skincare on Queen West.

On Saturday she hosted a meetup of 15 Toronto cupcake die-hards at the Drake where they sampled the Drake's own house-prepared goodies while chatting about their mutual lust for frosting. She also plans to come back for the city's second Cupcake Camp (a community cupcake eating extravaganza) and might even be a judge for the festivities.

So what did I learn? Erotica and cupcakes are the perfect pairing. They can both be decadent, satisfying and provide a great rush on an otherwise drab day.