LCBO Coming to King and Spadina

Buying liquor near King and Spadina will no longer mean heading to Liberty Village, Chinatown or the Financial District as the LCBO is preparing to open a big new store to serve the large condo district. If all goes according to plan the store will open in December.

News of this LCBO came over a year ago, when Councillor Adam Vaughan applauded the LCBO's decision to enter the neighbourhood but urged them to re-think the "fairly dead suburban-style frontage" that was planned in favor of a design that would mesh with the many little storefronts of the downtown location.

Now that the banner has gone up announcing the impending store opening, the LCBO has a plan that they think will suit the area. 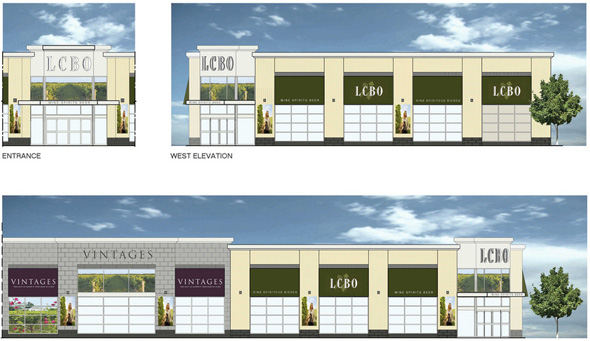 "We have worked closely with [Adam Vaughan] to address some of his interests with regard to the design of the store," says the LCBO's Chris Layton, who also noted that a new store in this area is certainly needed thanks to the large influx of residents that came with the condos.

And those residents will probably be quite pleased to hear that the 11,500 square foot store will boast 8,500 square feet of shopping space, over 2,100 products and a very large Vintages section with over 500 fine wines and premium spirits.

Of course, as with all LCBO stores, regardless of how big, bright and airy (and this one will be all of those, boasting six checkouts and more than ample display space) - or small, dark and dingy - the monopoly on our access to liquor remains. Thus, I think that an LCBO at the intersection of two streetcar routes and within easy walking distance of residents, shoppers and tourists alike (not to mention some of the closest LCBO alternatives fit in the cramped and dingy category) the new LCBO at King and Spadina seems destined to wild success. Much like the new one in the Roncesvalles area is.

The top 50 brunch restaurants in Toronto

Outdoor dining in heated bubble domes is back in Toronto

The top 50 vegetarian restaurants in Toronto