I'm always interested in what food can tell me about a person. In "The Fridge Files" I give a candid snapshot of random and willing Torontonians' lives by routing around in their fridges.

I've taken this idea and given it a summer spin in the Garden Files, where I dig around in Toronto's gardens.

This is the first summer that Ashley and Todd have ventured into the world of gardening, and they've found it is a project that they really enjoy working on together as a couple. Their housemate Dave and cat Dia also get in on the action, and it's proven a great way to bring them all together and spice up their nightly home cooked meals.

The plot of land they are now using for the vegetable garden was once overrun by lilies and ferns. They dug it up in early May and let the earth rest for about a month before planting their veggies. 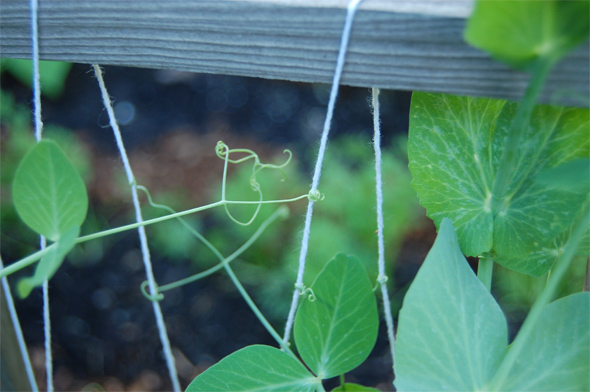 A lot of what they have in the garden were gifts from Ashley's mom, who's an avid urban gardener and provided much in the way of experience and wisdom. Being gardening novices, they're learning as they go and so far are really happy with the results (especially since a green thumb is a newfound skill Ashley didn't think she had).

The trellises and poles used in the garden are made from recovered wood found in the garbage (Todd is a contractor and hence handy enough to have built the structures for them).

A Garden Full of Green

They've also inherited an unruly grape vine that needs to be trimmed regularly. 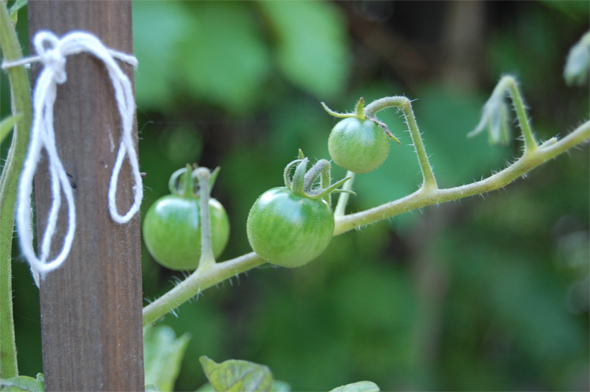 When I visited in mid July the tomato plants had fruited and had tiny little green balls. The green and yellow beans had beautiful yellow and pink flowers, and we discovered brand new tiny flowers on the sweet peas while we were chatting.

The veggie patch that had once been inhabited by ferns and lilies (now moved to a plot of land in the back of the yard) had an abundance of slugs - slugs that decimated the dill and had a nice snack on the beets, sweet peas and spinach. A pet and wildlife friendly slug bait seemed to be solving the problem. 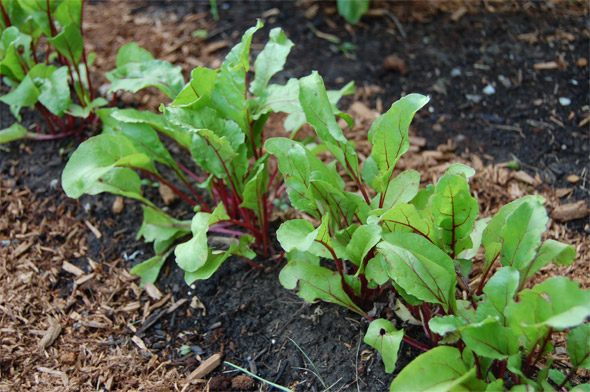 The beets (Todd's favourite) were the first signs of life in the garden. Luckily, they took little slug damage so they can still eat the greens.

The radishes were planted with parsnips as companions, and while the radishes are doing quite well there is no evidence that the parsnips are growing yet. The spinach, which was only about 6 inches tall had already gone to flower, and Ashley thinks it might be because it was planted too late in the season. 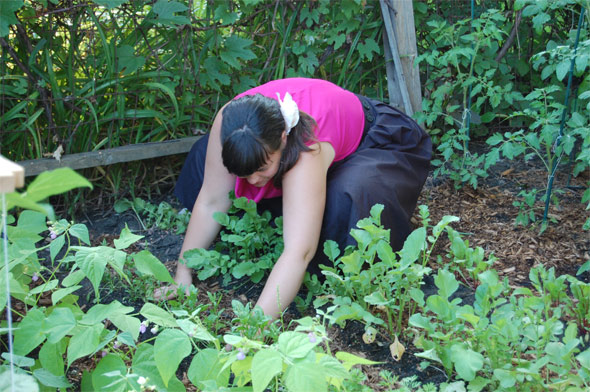 Like most gardeners, Ashley or Todd go out to the garden each morning, and with the help of their resident garden gnome (their cat Dia), check on what's crept in or poked out during the night. "Weeding is like popcorn," Ashley explains as she absent-mindedly weeds while we talk.

For their first attempt at gardening, Todd and Ashley are happy with the turnout. Now, aside from a little help here and there, they can just let nature do its (utterly impressive) thing.