Last week we were contacted by Jonathan Scott who had some fairly unflattering things to say about Mezbaan, a restaurant near Sewells and Morningside (Map) that serves Indian and Pakistani food.

As a former employee there, his complaints ranged from unsafe food handling to re-serving customer leftovers. On Monday he sent us a link to some videos he posted on YouTube that bring light to some of the potential problems. Take a look:

All this got me thinking about the safety of Toronto restaurants so I decided to take a closer look at the Toronto Public Health Food Premises Inspection and Disclosure system, otherwise know as those little signs posted in restaurants indicating whether they have received a pass, conditional pass or failing grade at the hand of a Toronto Food Inspector.

The good news is there's plenty of information available to the public about the history of food inspections and infractions (if applicable) at any restaurant in the GTA. For example, for Mezbaan, I was easily able to find out they were subject to a surprise inspection last Friday July 26th. 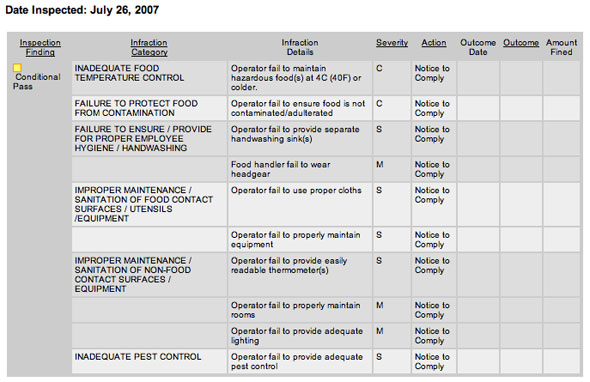 The DineSafe web site lists the details for the restaurant's entire inspection history. The most recent inspection summary (above) lists a number of infractions rated as Minor (M), Significant (S) or Crucial (C).

Looking over Mezbaan's inspection history, I notice that a previous inspection (below) on February 9th 2007 includes many of the same infractions: 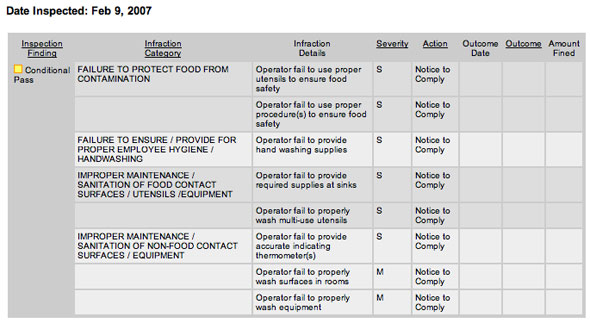 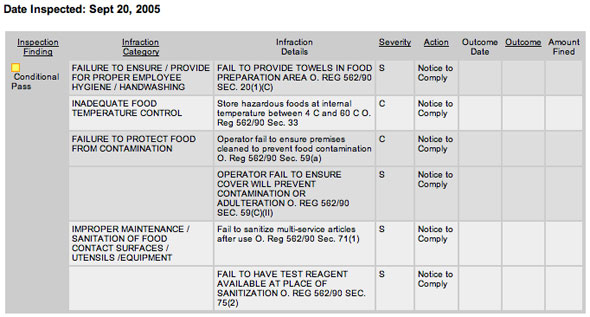 I was a bit perplexed how a restaurant like Mezbaan could still be allowed to stay open given that it had received conditional passes on three separate occasions in less than a three year span and that many of the infractions were repeat offenses. So I decided to contact Toronto Public Health to see if they could shed some light on the situation.

I spoke with someone named Sylvanus Thompson who agreed to fax me a more detailed report of the latest inspection summary. Apparently, this report is available to anyone who asks for it, either on premises at the restaurant or through Toronto Public Health.

He also explained that an inspector doesn't have the authority to shut down a restaurant unless it receives one or more infractions marked as Crucial. But even if a restaurant does receive this rating (as Mezbaan did on its most recent inspection and on the one on September 20th, 2005), it's still up to the inspector's discretion what action to take. I was told that usually an inspector will give a restaurant the opportunity to take corrective action within 24 to 48 hours before enforcing a closure.

In the case of Mezbaan I was able to find out via the faxed detailed report that the restaurant owner has voluntary decided to close the restaurant until the infractions are corrected. That's a good thing. By the looks of the videos, this restaurant shouldn't be allowed to serve food and if inspectors can't or won't shut i down immediately it's nice to know that a bit of a written spanking can cause a restaurant owner to re-think how they run their business.

All videos by Jonathan Scott