For all of their many charms and precious little faces, cats can be incredibly annoying — and I say this as someone who would literally give my life for cats.

My cat, your cat, any cat, all of the cats; I love them so much as a species it hurts. But I wouldn't trust one alone with a candle... not after seeing video footage from an apartment where one local kitty recently set himself on fire by doing the most-catly of things.

Toronto resident Natasha Conklin tells blogTO that her fluffy feline, whose name is Cloud, was left with some singed fur — and no other physical injuries, miraculously — after knocking a candle into an empty paper bag during Friday's freak power outage.

A Toronto couple's mischievous cat started a small fire on Friday by knocking a candle into a takeout bag. Fortunately, nobody was hurt and it was all caught on video. pic.twitter.com/f3KEUNxVTu

Some 40,000 people in Midtown Toronto and Scarborough had been plunged into darkness at the time by what we now know was a raccoon making contact with equipment at a Hydro One transformer station.

It was only 5:15 p.m. when the lights went out for impacted hydro customers on Jan. 6, forcing most to bust out the flashlights and candles for dinner prep, entertainment, avoiding walls, etc.

"It was the perfect storm. There were a bunch of candles lit around the apartment thanks to the power outage," said Conklin to blogTO on Monday.

"We had also ordered takeout and the empty paper bag was up on the counter. My partner went to go use the bathroom and when he came out he smelled the smoke and saw the ashes on the counter." 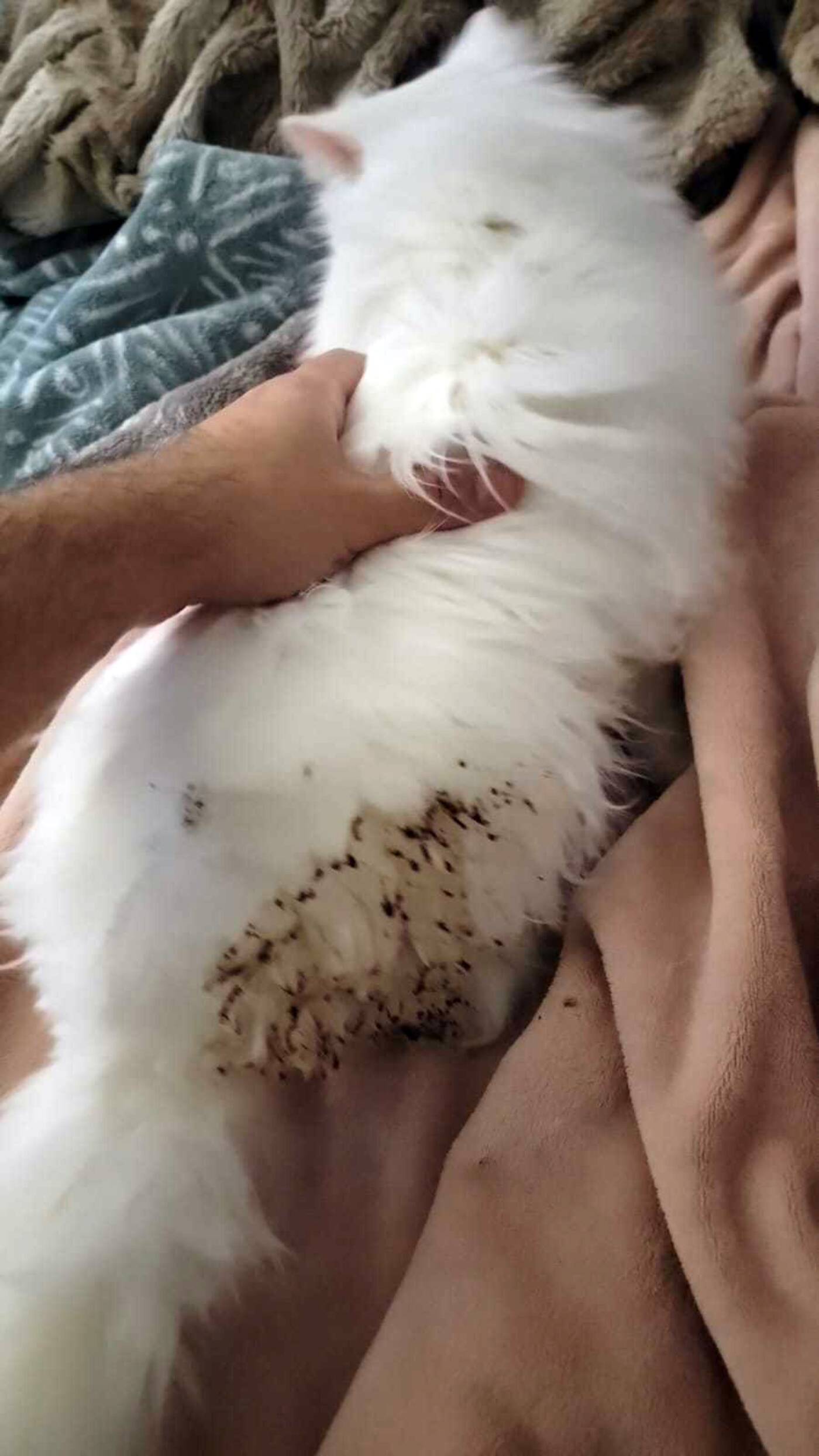 Cloud's pretty white fur was singed in the blaze he created, but the animal was otherwise unharmed. Photo via Natasha Conklin.

Conklin's partner messaged her right away after seeing the aftermath of Cloud's mischief in their kitchen, telling her to check the home security feed in their new-ish midtown condo unit.

"I check the cameras and see baby Cloud go up on the counter and knock the paper bag onto the candle while he literally just sat there and watched it go up in flames," she said of the beautiful white cat, who presumably enjoys kicking things off tables and wants to watch the world burn as much as any other cat.

"There was no damage and no kitties were harmed, with the exception of a little singed fur). I think my partner learned a new lesson about not leaving candles unattended around the cats."

All's well that ends well, and the video footage of Cloud is funny knowing that nobody was hurt — but this story could have had a different, much sadder ending.

"Unattended candles are a no-no, especially around pets," advises The Kingsway Animal Hospital in Toronto. "Cats and dogs can topple a burning candle easily igniting surrounding objects, and large dogs can knock over a candle with a quick wag of their tail."