Winter can be cruel to wildlife in regions like Southern Ontario, where weather conditions are often volatile, and storms source extra power from the Great Lakes.

Waterfowl are among the most vulnerable creatures in this regard based on where they tend to live; Swans get their webbed feet stuck to pond surfaces, ducks with flash-frozen wings are rendered flightless on rivers, and all sorts of lake-dwelling birds become trapped in (or worse, beneath) pockets of ice.

Resilient animals can survive harsh inclement weather in some cases, breaking up through surface ice and thriving like the hearty canucks they are.

In other cases, survival is pretty much impossible without a miracle.

At least two Canada geese were in a terminal position like this after a vicious blizzard swept through Southern Ontario over the holidays, killing dozens of people and leaving some parts of the region completely snowed under.

If it hadn't been for the likes of four heroes who'd been out documenting the storm's impacts in Fort Erie (or in one person's ironic case, hunting geese) on Boxing Day, these geese would not be alive right now.

Myself, along with Chad and Alisia trying to chisel the Ice of the Goose. https://t.co/GbRkA1DyXd

You see, the lakefront community of Crystal Beach in Fort Erie was among the hardest hit during the the storm in question thanks to its location on the very eastern edge of the Great Lake it's named for.

The weather event may have left cool rows of surreal-looking "ice houses" along the town's waterfront, but so too did it trap live animals — more than anyone should dare to think about — within the layers of ice it created.

Nigel Hay, a YouTuber and Sea-Doo adventurer who documents storms on Lake Erie, among other things, tells blogTO that he noticed some "spots of blood on the ice" while filming storm footage for his social media channels on Dec. 26, 2022.

Hay, who hails from Ridgeway, Ontario, in Fort Erie, says he initially presumed that a coyote or fox had found something for dinner.

"Then, around the same time, a young couple had made their way across the ice about 50 meters ahead of me. We were the only people out here at this time," said Hay.

"The guy was crouching down and I instantly knew he'd found an animal. I shouted over to them 'is it an animal? He replied 'yes, and it's alive'."

"The Geese were found frozen to the ground in the parking lot of the Boat Launch at Crystal Beach. It's most likely they were caught out by the sudden flash freeze on the Friday," Hay told blogTO this week.

"A Seiche was occurring, which is when very strong south westerly winds over a prolonged period of time push the lake water up from the west end of Lake Erie to the east end, increasing the water level by 6-8ft. The winds also caused 10-20ft waves on Lake Erie during this storm."

Hay explained that the waves had been causing spray for hours when temperatures suddenly dropped down to - 10 C with a windchill of - 20 C.

"Everything suddenly froze and the spray instantly turned to ice, encasing anything it came into contact with, which in this case was the Geese," he said.

"Their wings would have been coated in ice, making them unable to fly, so they took shelter by laying where they were. But within minutes they most likely became trapped."

Hay estimates that the geese had been imperilled for around three days when they were rescued by himself, a man named Chad, a woman named Alicia and a man named Henry.

"I was very surprised. It was heart breaking to see an animal like that," he said. "We had to do something otherwise it would die. The snow had stopped but it was still -8 C that afternoon." 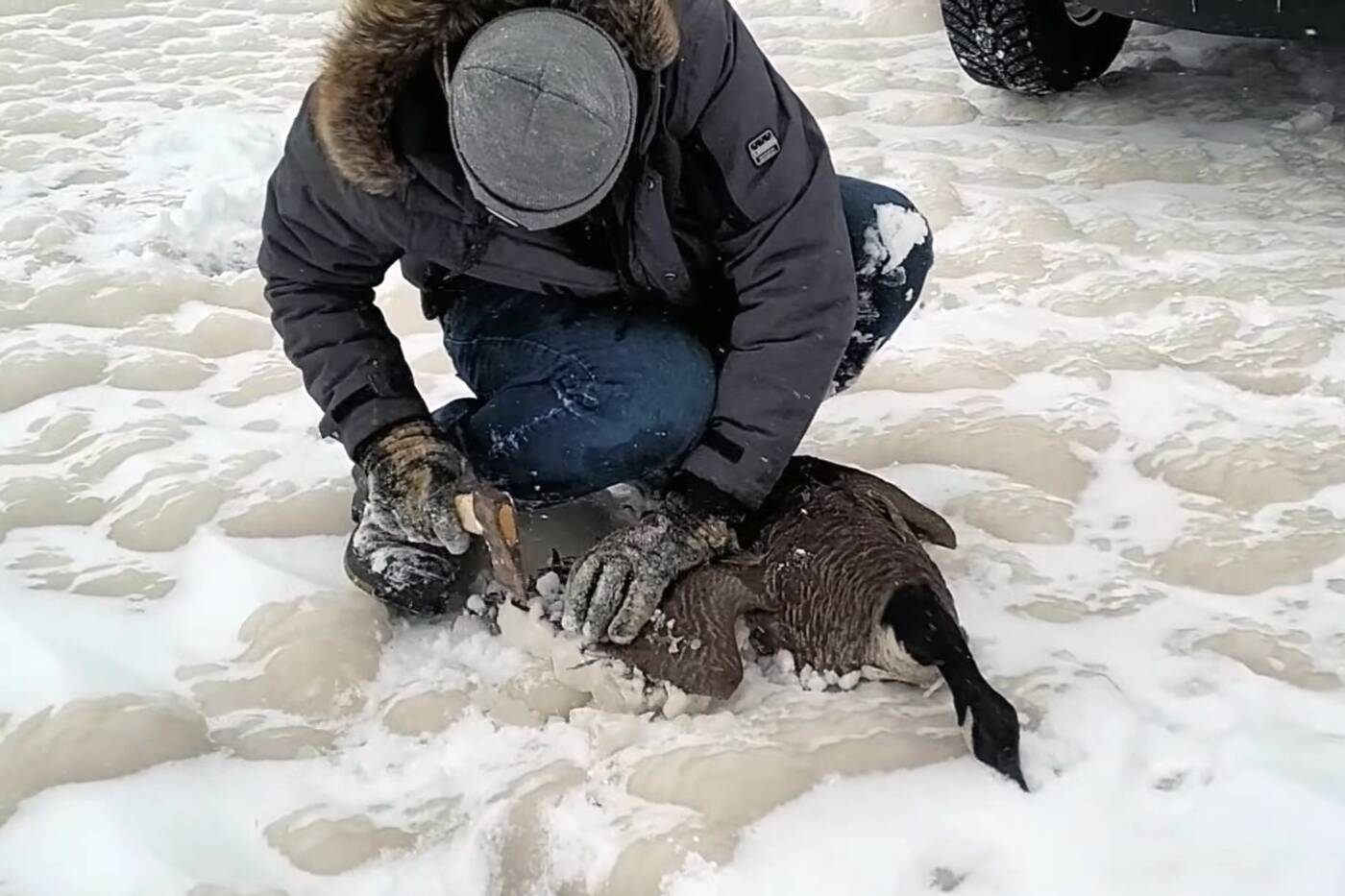 "Chad had the hammer and chisel and he immediately began chipping away at the ice. Some of it was eight inches thick," said Hay. "The Goose was very docile, weak. I kept placing my hands underneath to see where it was trapped."

First, Chad chiselled away the ice in front of the goose, and then got to work on the ice around its neck and upper body. The bird's feet weren't frozen to the ice fortunately, though Hay thinks they may have been at one point.

"There was a lot of urine underneath the goose, and it's own body heat had melted a small part of the ice where the feet were," he explains, noting that it took about 40 minutes in total to free the goose.

As Hay, Chad and Alicia attempted to free the first goose, a hunter named Henry showed up to the scene.

"He had actually been out goose hunting that morning. He went and got a hatchet from his truck. Initially we thought he was going to end the suffering, but he then stumbled upon another goose that was buried under the ice, just it's face showing," said Hay.

"He immediately began breaking the ice... so now we had two geese that were being rescued."

Yeah there was all kinds of birds with ice on their necks or feet struggling to fly. I'm afraid that when all this melts in a few days, the carnage will be obvious.
The toll on wildlife will be devastating.

Both geese free were eventually freed from their icy tombs, and Hay said that while both had lost a lot of feathers, their "wings and feet were looking good."

Henry the hunter offered to take the geese home, where he had heat lamps, to warm the animals up.

"He promised Chad's girlfriend (Alicia) that he would take care of them for 24 hours and, if there was to be no hope for them, he would end their suffering," said Hay.

It wasn't long before Henry send the group a photo of the two geese laying together under heat lamps, drinking water.

"Henry kept his promise," said Hay. "The next morning, he moved the geese to his parents farm in Port Colborne and placed them with the free range chicken. He doesn't expect them to fly just yet but he thinks they have a good chance."

CANADA Goose update.
The two we rescued seem to be doing well, just got sent this photo of the pair pic.twitter.com/UrPm2xoujl

The geese will be able to leave whenever they feel ready to do so, but for now are in a safe place with plenty of food and water.

"The community spirit really showed over the Christmas Holiday, from helping one another in a blizzard to complete strangers coming together to save two geese," said Hay of the adventure.

"I have received thanks for our effort from so many people from all over the world."

Hay shared video footage from the dramatic rescue on YouTube, but tells blogTO that he didn't catch too much of it.

"The video I posted was an after thought. I think we were about 10 minutes into the rescue before I first recorded some footage of the rescue," he says.

"During the hour from finding them the freeing them I actually only got four minutes of film. My hands spent most of the time trying to wriggle free the goose."