Toronto's most powerful dog is the literal mayor we all deserve

It's not easy being mayor. But the city's first-ever Pet Mayor makes it look like a walk in the dog park. 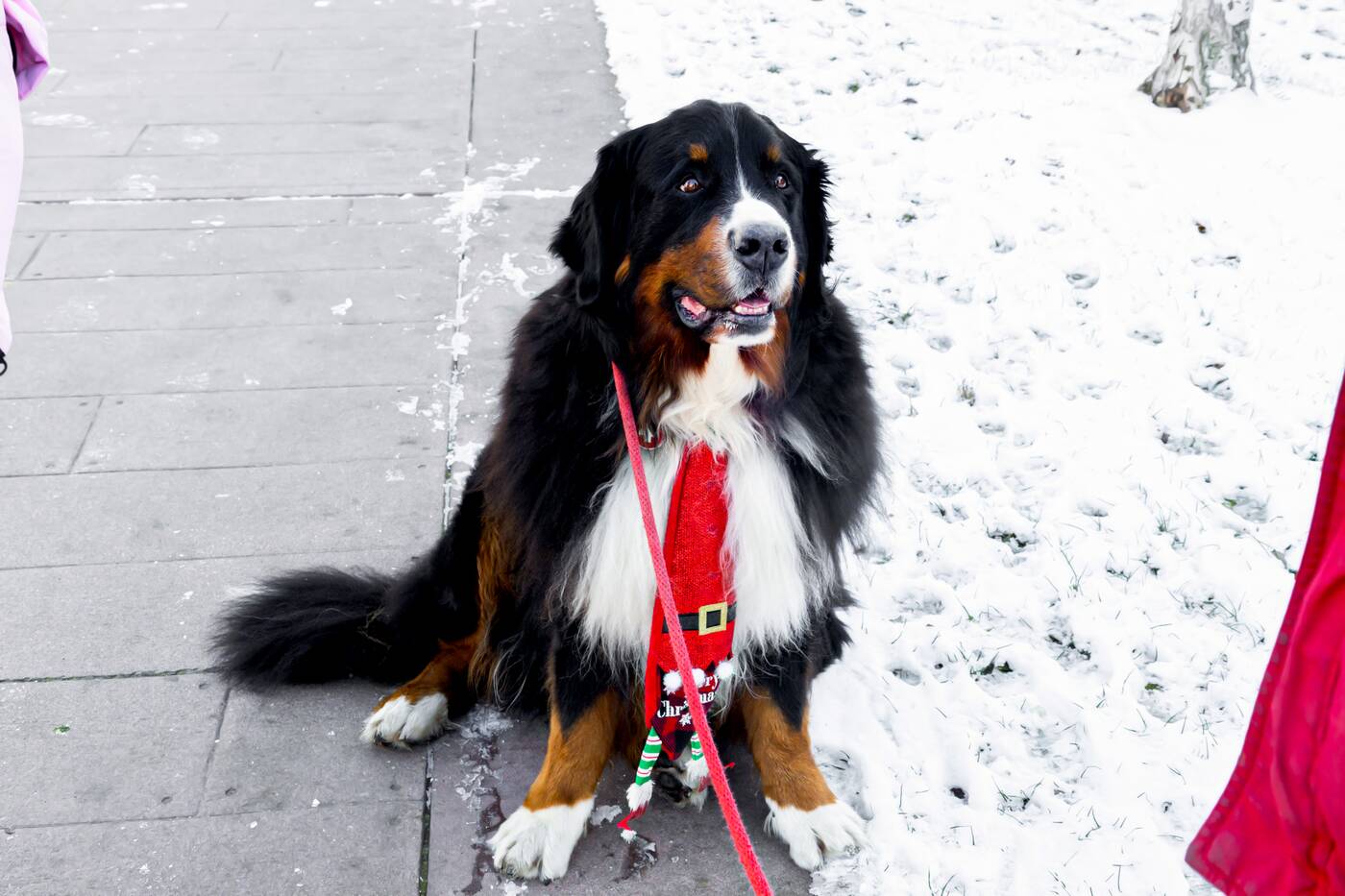 Mimico Max won a two-year term after defeating Boo the ferret and a handful of other animals for the pet mayor title.

Months ago when Toronto was electing its new (human) mayor and councillors, a special election was taking place in the Etobicoke neighbourhood of Mimico - where dogs, rodents and cats battled it out for the title of pet mayor.

It was a close call between four-year-old Mimico Max and Boo the Ferret, whose owners papered the town with their election flyers, encouraging locals to familiarize themselves with the 13 animals candidates — and of course, elect their pet.

When polls closed and votes were counted on Oct. 24 the one-and-only, 132-pound Mimico Max was awarded with a two-year term and a local celebrity was born. 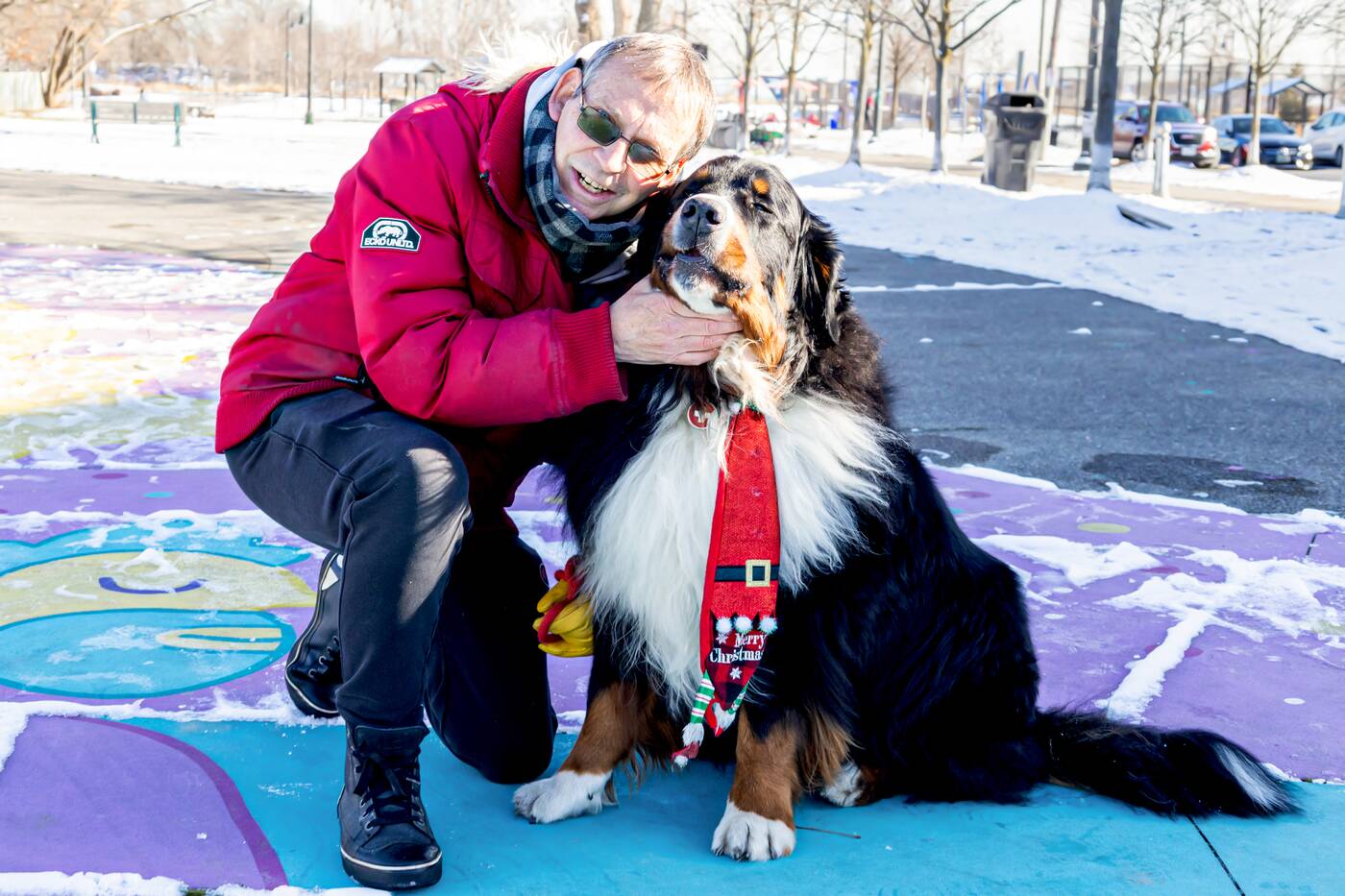 Mimico Max and his owner Ray Crawford, he put in a ton of work to make sure his beloved four-year pup won the pet election.

It seemed his election platform of establishing a local food bank for pet food and encouraging more dogs to become therapy animals resonated with voters.

Now with two months under his belt and multiple public outings, I met up with Mayor Mimico Max and his owner Ray to discuss what exactly it's like to be a dog mayor.

While everyone waits on the #TorontoVotes results, our advanced tabulation machines here in #Mimico have already yielded our first Pet Mayor!

With 261 ballots cast, it was a hotly contested race, but Mimico Max carried the day! Looking forward to working together! pic.twitter.com/Ot3Iq0r1DR

"What I've been doing is seeing what's coming up, so like the parades, stuff like that or wing it," said Crawford when asked what Max's day-to-day looks like. 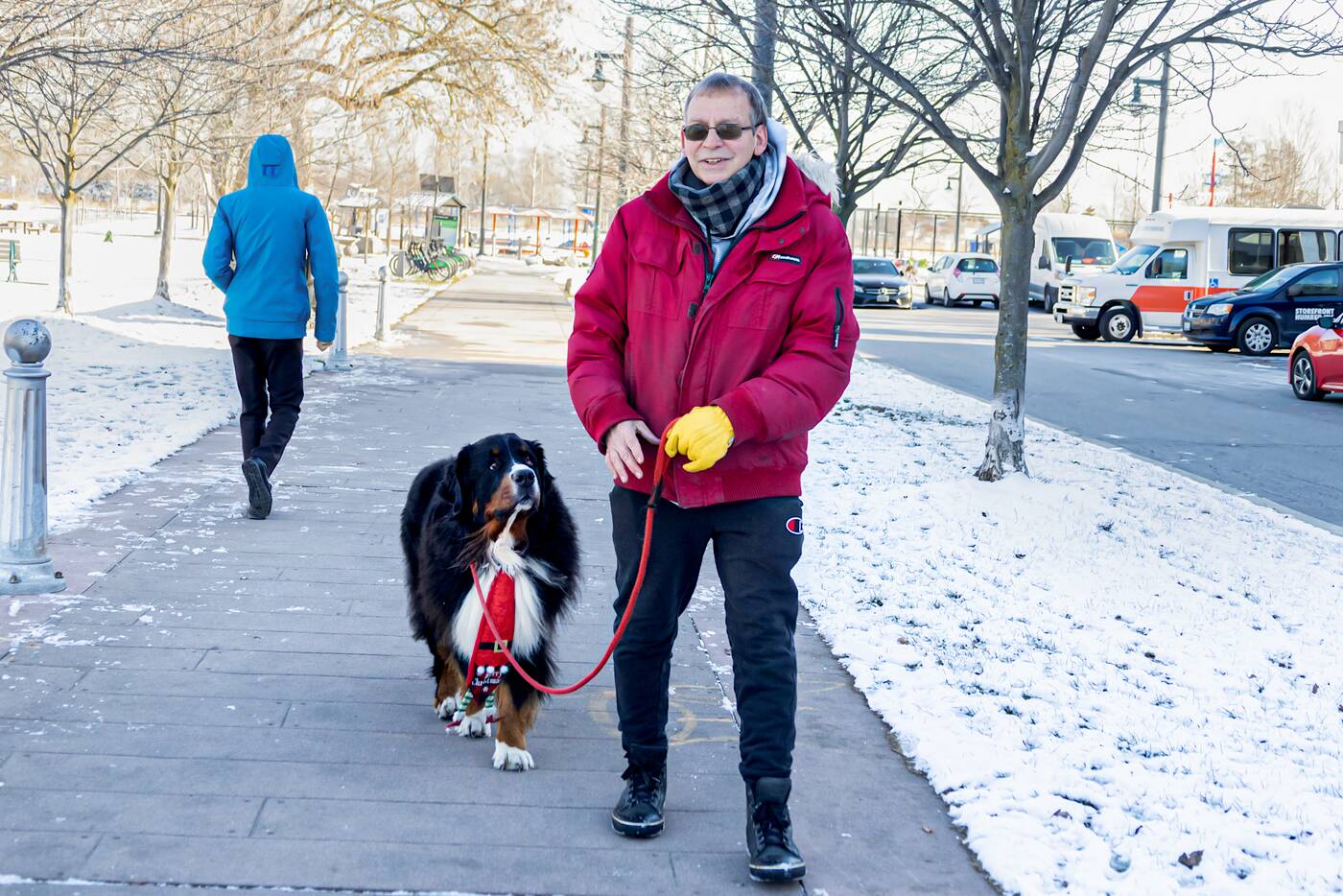 Everywhere Ray and Max go in Mimico the duo are met with adoring fans.

Since his victory, Max has made public appearances at the local pumpkin parade, Remembrance Day ceremony and the Santa Claus Parade, where he is met with adoring fans and lots of hugs.

"He's a super dog, super-friendly. He'll come up to anybody and he'll sit and wait for people," said Crawford.

It's at these community events where Mimicoans swarm the mayor for photos, head pats and nose boops and a chance to shake the mayor's paw. 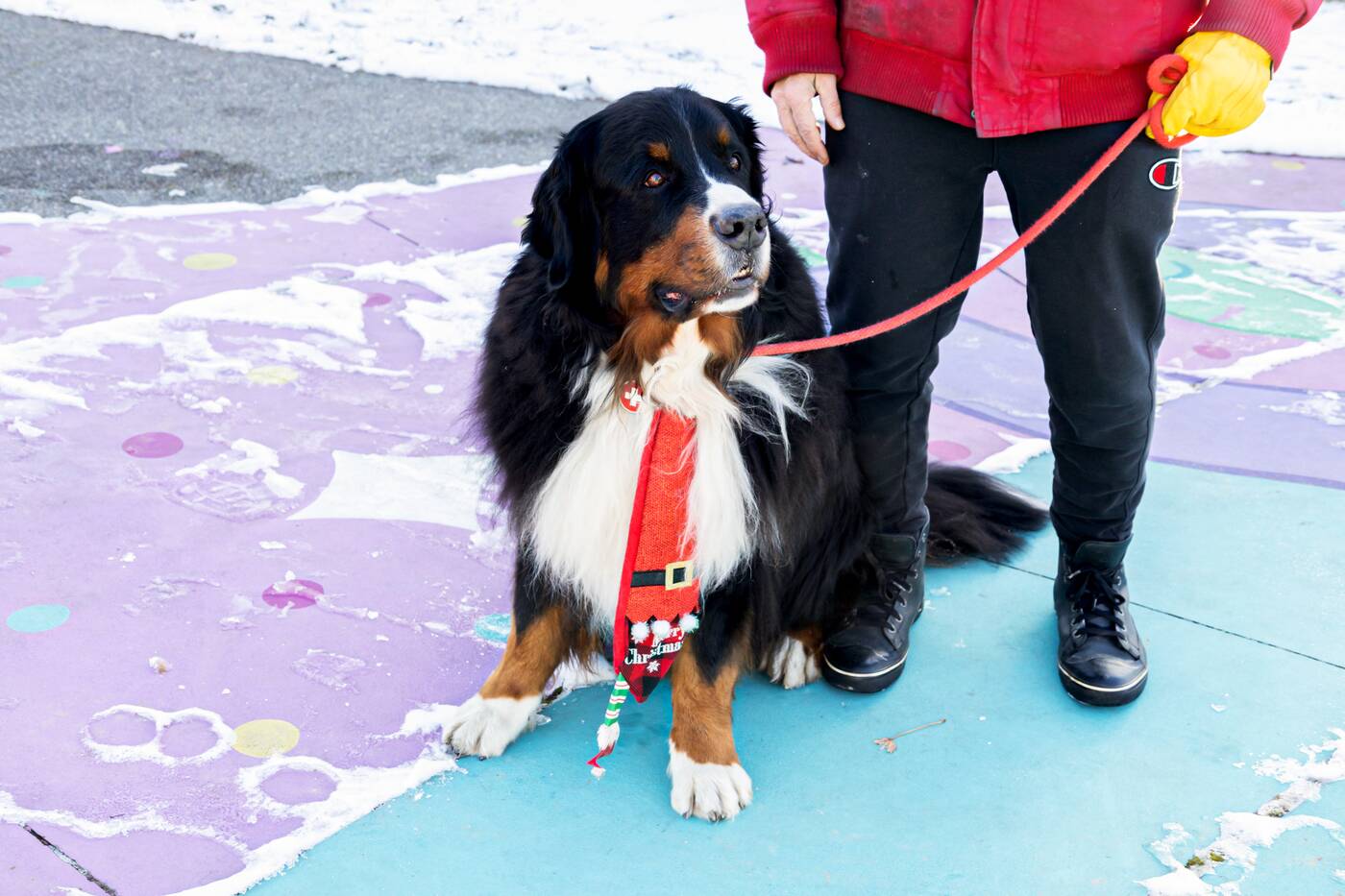 Mimico Max is a fine dresser, posing here with his special Christmas necktie.

Days after his victory Mimico Max established his legacy as hard-working mayor when he met two real politicians, Councillor Amber Morley and human Mayor of Toronto John Tory, who jokingly asked Crawford if he should be worried about his new competition.

Born in Prince Edward County Mr. Max lived there until he was eight-weeks old until he came to Mimico and has spent his entire life here, making him extremely knowledgeable with the local parks, trails and hot spots.

"Everybody recognizes him," said Crawford, with many asking "how's the mayor doing?"

In today's world with rising inflation, impossibly-high rent and lots of negative news, Mimico Max brings joy and smiles into the lives of the community - it's mainly why Crawford believes his beloved sidekick has been met with such positivity. 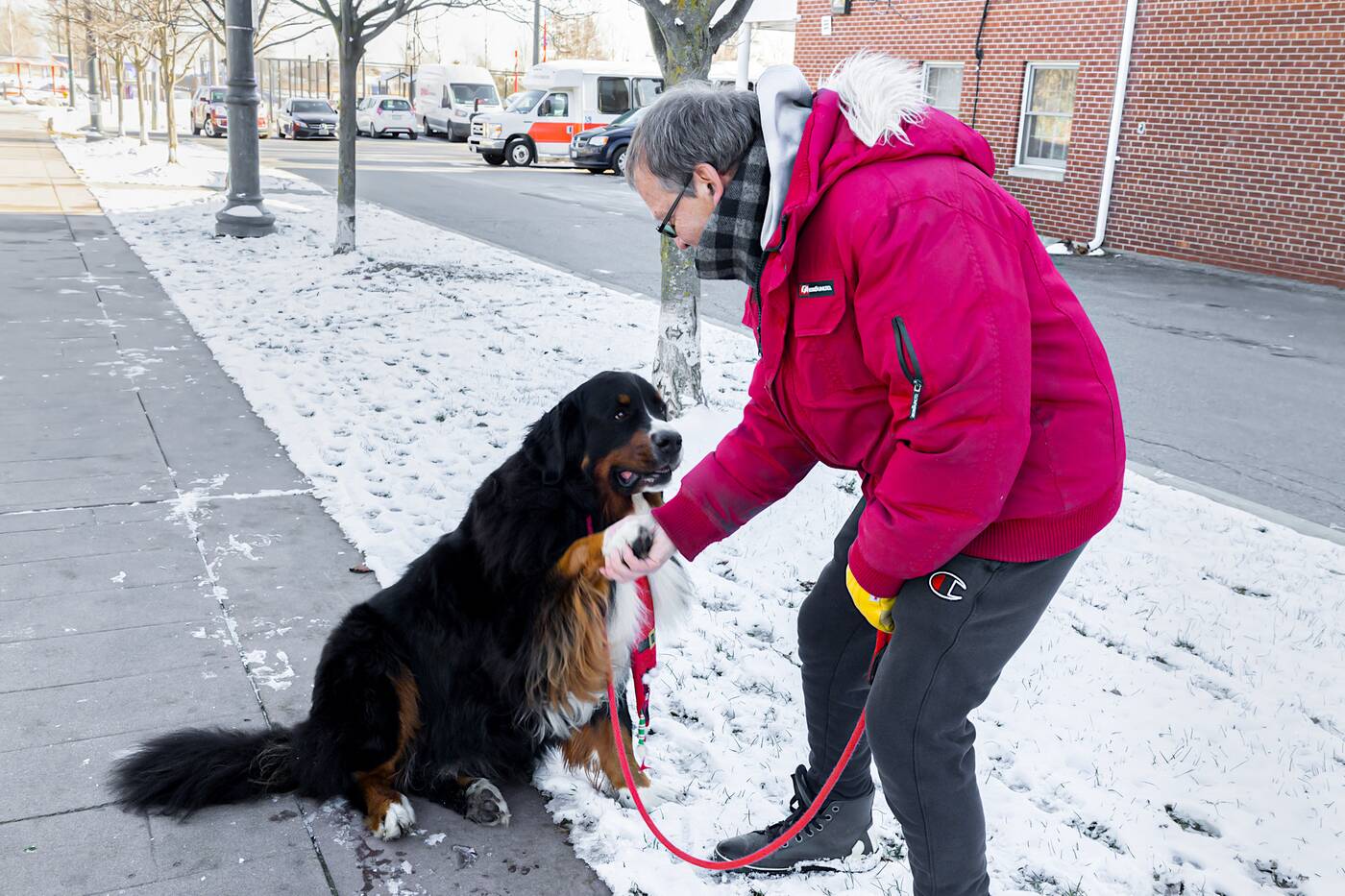 A meet-and-greet with the mayor is never complete without a pawshake.

Of course it doesn't hurt that Max is the sweetest, most gentle dog around. He truly is a "gentle giant," says Crawford.

As the year winds down, Max already has busy plans for the New Year, including a shop-local Mimico campaign (with his endorsement),  receiving his official plaque recognizing his election and getting the pet food bank idea off the ground.

So if you're ever in Mimico and you see treat-loving and friendly dog, you might've just met Pet Mayor Mimico Max.