An office worker in Toronto's Financial District is fed up after having a bike stolen for the fourth time from the base of a classy office tower, in plain view of security cameras and passersby.

Michelle Pinchev tells blogTO that her Bay Street executive husband Patrick recently exited the Exchange Tower at First Canadian Place "at 9:30 p.m. exhausted after a long work day to find that his bike was gone," proving that the third time, is not, in fact, the charm.

"It was MY bike this time (which is why I am personally so fired up) which he borrowed. His bike was just recently stolen too. Building security basically just shrugs and is totally useless and unhelpful," fumes Pinchev.

Though the bike was locked in an area monitored by cameras, Pinchev stresses that "there is no signage or anything there indicating that the area is prone to repeat thefts or that the space isn't secured/monitored."

"One might say my husband is at fault for repeatedly parking his bike there (definition of insanity, right?), but this is classic victim blaming. It's the best parking option for him, closest to his office. We have two young babies at home and he works long hours, waking up at 5 a.m. every day to be with the kids, then biking to work, then home around 9 or 10 p.m. many days."

She says that the theft has also affected the couple's two-year-old and seven-month-old children, as "part of what was stolen on my bicycle is the attachments for our trailer for our kids to ride along with us, which will be tricky to replace now."

"The thieves have robbed our whole family of the experience of riding together. "

Pinchev penned a letter to Mayor John Tory, local councillor Ausma Malik, the Toronto Police Service, and management of both the Exchange Tower and First Canadian Place, among others, demanding answers over the thefts.

"Why does this keep happening? Is the area monitored? What is security doing about this? What is building management prevent theft of property at the bicycle parking they provide? What is the Toronto Police and the City doing about the rampant issue of bike theft in Toronto?", the letter asks.

"If criminals can do whatever we want outside our workplaces... Are we safe?"

"We've done all the right things… We register our bike numbers, we buy top-of-the-line locks, and secure bikes, the proper way. But this keeps happening."

The letter does address the elephant in the room, Pinchev explaining that "My husband is a Managing Director at BMO Capital Markets - he bikes to work for his physical and mental health as well as environmental reasons. He is compensated well, and it is not lost on us that we can afford to drive or just buy a new bike."

"But if this is happening to us so often (we've had six bikes stolen in total, at work and at home), it must be happening to all cyclists, including those who can't afford to replace their bikes so often."

"Also, being robbed regularly at your place of employment makes you feel targeted, victimized and unsafe. It is unsettling, and a kick in the gut to finish a long work day only to find your mode of transportation has vanished, while security simply shrugs their shoulders."

"We are disappointed, heartbroken and fed up with the apathy and indifference we are seeing in the city towards the rampant issue of bike theft in Toronto."

Though the letter acknowledges that "there are bigger priorities impacting the safety and wellness of Toronto citizens," Pinchev argues that "this issue has become so pervasive that it demands our attention."

"If criminals feel secure sawing and cutting heavy-duty bike locks in front of prestigious buildings like FCP, with cameras, and can do so with impunity, over and over again - what else will they feel emboldened to do?" 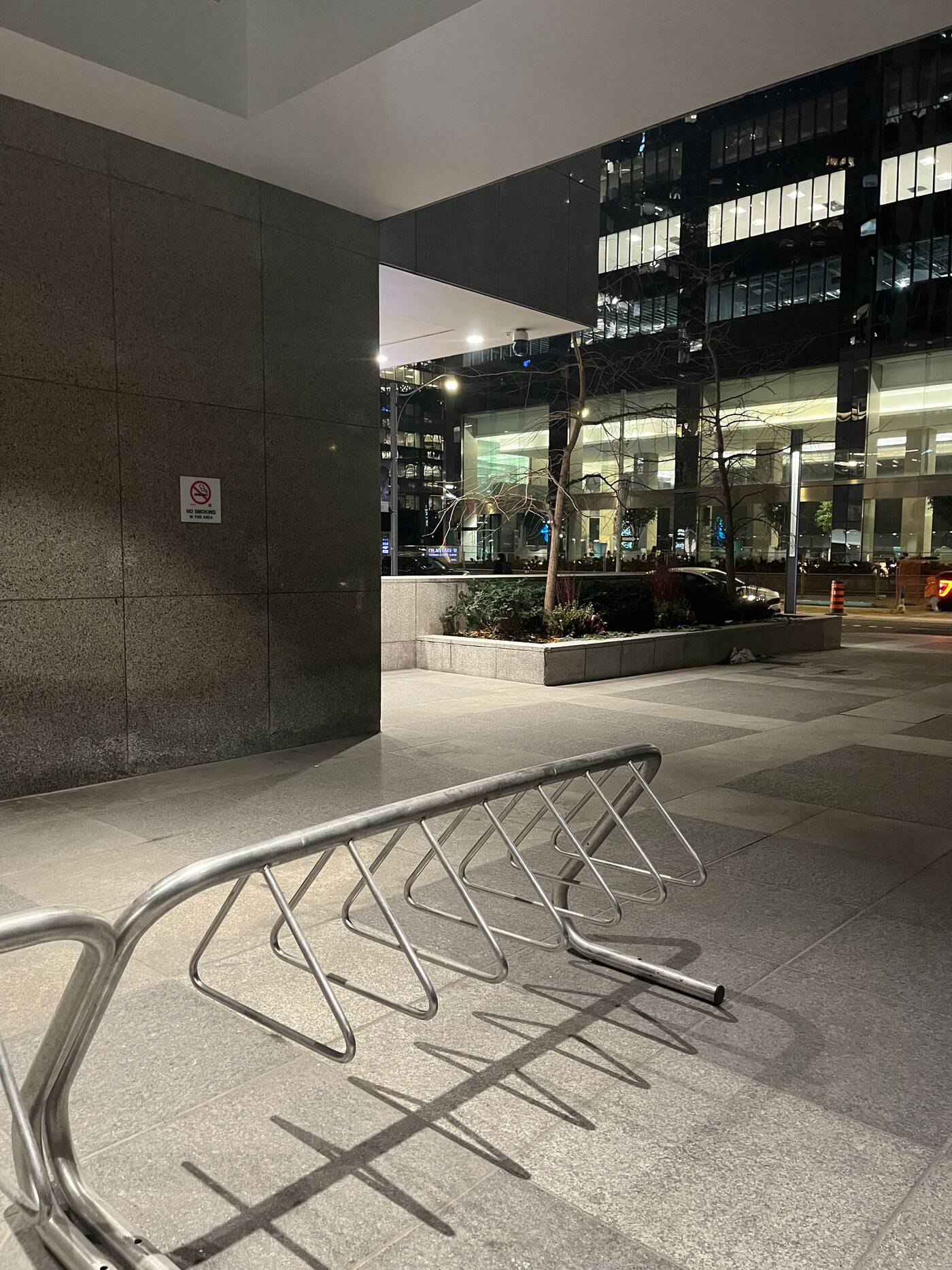 The Exchange Tower's bicycle locking station is in full view of the street and the supposed watchful eyes of security cameras.

She does offer some solutions in her plea to the powers that be, suggesting the City use street cameras to identify vehicles used in thefts, increase security patrols, place signs that areas are monitored, have police investigate the resale of bikes on sites like Craigslist, and plant bikes with tracking devices to catch thieves, a practice used in U.S. cities.

A Toronto Police Service representative confirms to blogTO that the have indeed received this letter from Pinchev, though they say that according to their data for 100 King West, "there are only two reported bike thefts on file for 2022."

Pinchev says that she got a similar reply from police on Thursday morning, though explains that "the previous two thefts were not in 2022... the four thefts happened over the course of a few years during his time working at BMO."

Representatives of the property management company, Brookfield, have not yet responded to our request for comment.