A high-rise-crazed, housing-starved Toronto has more construction cranes than it does Tim Hortons locations right now (trust me, I checked,) and it can't be easy keeping all those active work sites free of trespassers.

But one construction site appears to have taken security a step too far, as someone — and it's unclear who — has wrapped a scaffold around the base of a new development with barbed wire, giving the sidewalks at the base of the nearly-complete tower a rather post-apocalyptic vibe. 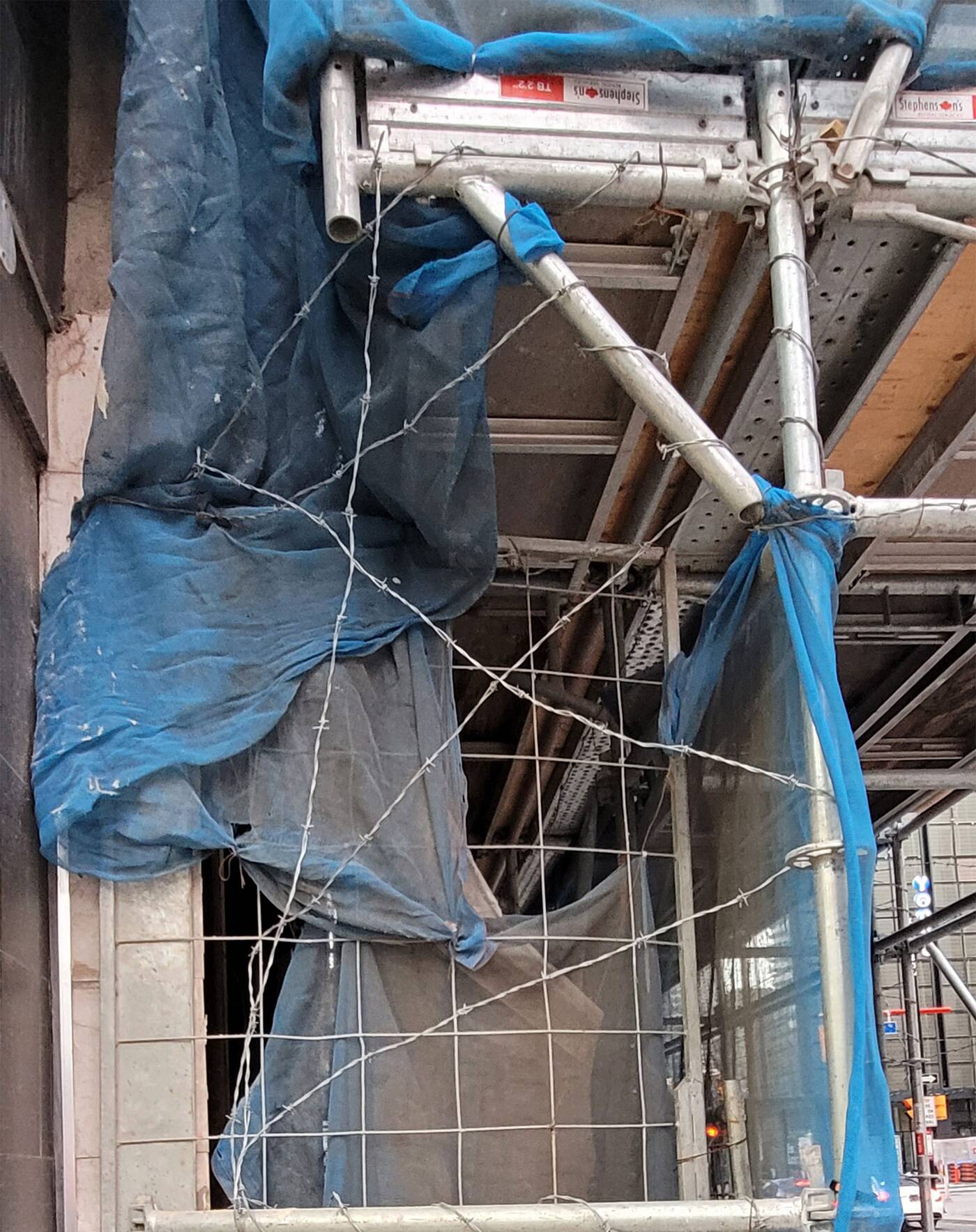 blogTO reader Adam Wynne shared photos of the curious scene at 480 Yonge Street, saying that he was "shocked at the haphazard way in which the barbed wire had been strung around the scaffolding and above the sidewalk."

Attempts to get to the bottom of who put this wire up, and who is responsible for enforcing its removal, proved to be such a colossally deep and confusing rabbit hole that I'm not sure I'll ever see daylight again.

The site in question is home to a recently-topped-out 38-storey tower containing purpose-built rental apartments. Though it has reached its final height and is largely enclosed in exterior cladding, it is still several months away from occupancy and remains a very busy construction site.

Whether installed by a party associated with the development in an attempt to deter climbing, or a very perplexing display of vandalism, the barbed wire's continued presence is concerning to locals.

"It is in easy reach of those walking on the sidewalk below, and several sections are low enough to the ground that children could easily encounter it," says Wynne.

"Surely there is a better way to mitigate unauthorized parties climbing on the scaffolding without jeopardizing public and worker safety."

Wynne says that "the city of Toronto has very specific requirements about where and how barbed wire can be used — including minimum height requirements to prevent accidental injury."

A quick review of the city's fence bylaw reveals that there are indeed strict limitations on where these materials can be used, stating that "no barbed wire, chicken wire or other barbed or sharp material shall be used in any fence to exceed 2.5 metres in height," with some minor exceptions that don't seem applicable here.

I'm not going to sit here and point fingers (because lawyers and stuff) but it's pretty clear that whoever installed this barbed wire did not do so in accordance with this bylaw.

Wynne says that he sent photos along with his concerns to 311, only to be advised that "they are no longer filing service requests by email, and that I need to send this via their app or website. However, there is no pre-set option for this issue on the app or website."

And the dead ends kept piling up.

Next, Wynne says he contacted Toronto's city planning division, but was told that the planner associated with this development was no longer in that department. He then tried contacting Toronto Building, which he says "advised that it has to be sent to Municipal Licensing and Standards" for consideration.

In what reads like a bureaucratic wild goose chase, Wynne next contacted Municipal Licensing and Standards via a "property standards investigation" request on the 311 app, only to be told that they had no jurisdiction over the matter.

"Throughout this process, the local councillor's office has been silent — albeit I understand this week is a transitionary period between councillors," says Wynne.

With all other options exhausted, Wynne says he has "asked Toronto Building to re-examine the issue following MLS' response," and was told that they are — as of Thursday afternoon — "looking into it to see if it falls within their jurisdiction."

In addition to Wynne's extensive efforts in investigating why such an installation would be permitted, and which department is responsible for removing it, blogTO reached out to the project's developer QuadReal, contractor Skygrid, and site security firm ASG Security Group seeking an explanation.

None of the companies have responded to requests for comment as of writing. However, there is evidence that the site has utilized barbed wire as a security measure in the past.

A Google Street View image captured in 2021 shows barbed wire placed atop a construction fence, though it is unclear from images if this installation conforms with the 2.5-metre height restriction.

If there's a lesson to be gleaned from all this, it's that answers don't come easy in a city where every single municipal department hands inquiries back and forth like a game of informational hot potato.

So, for now, mind the barbed wire, I guess.