There is nothing quite like a busy construction area in Toronto that puts both cyclists and pedestrians into the hands of death.

But a certain newly-sprouted construction project that has closed a portion of a major downtown artery might have just taken the cake.

Introducing the Adelaide death trap, specifcally between York and University.

#TrafficAlertTO
University + Adelaide intersection reduced to one lane each direction.
No access to Simcoe St south of Adelaide St.
Adelaide St from Simcoe St to Bay St reduced to one shared lane for construction.
Plan ahead https://t.co/T5OVOBhDFx pic.twitter.com/DHXg6jciBW

The street is now reduced to a single eastbound lane for a number of projects including waterman replacement, laying of streetcar tracks and other necessary improvements.

But its current state is not great.

Cyclists travelling eastbound on Adelaide will be met with a mess of mud, dust, miscellaneous construction paraphernalia, and some cops. 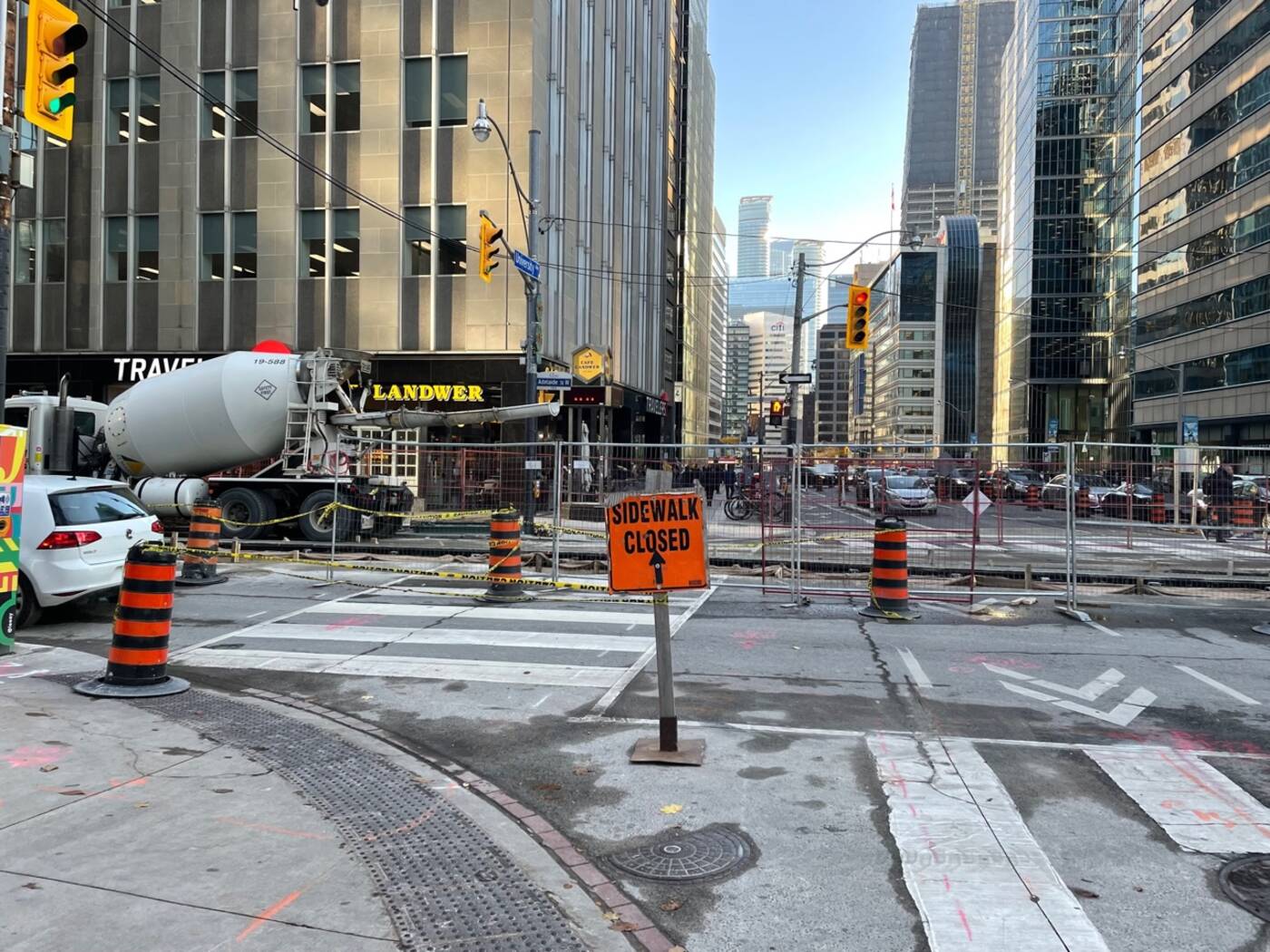 You'll need to dismount as you approach University and walk your bike on the sidewalk until you pass York, where you'll then have to share a single lane with cars when more construction ensues.

Of course, this clogs up the very small sidewalk as there is now only one open, meaning lots of crowds.

This stretch has caught the attention of cyclist activists in the community, including Alison Stewart, co-chair of policy for Cycle Toronto.

Speaking with the CBC's Ismaila Alfa, Stewart calls the area a construction pit with metal fencing every and scrambled walkers.

"Crossing the street is a very dangerous situation, when in fact you are able to. For example, the intersection at Duncan has removed access for those seeking to get to King, because it's completely blocked."

🚧 🚨 Adelaide (Spadina to Parliament) is under construction 🏗 until Spring 2023 leaving choice of either riding with traffic or walking 🚲 until you can get riding again as the work makes it way east. I’ll be speaking to⁩ ⁦@CBCIsmaila⁩ on Monday about it. #BikeTO pic.twitter.com/j76MAbRWFT

She also points out there are rarely people there directing traffic. When I strolled around there were two cops who appeared to be supervising the site but I didn’t witness any direction.

Stewart also makes the case that the Adelaide Corridor is a very important and popular route for cyclists and that its current state is very dangerous.

Not only for cyclists but for  car drivers too -  you'll be stuck in a very slow and mind-numbing conga line of other cars.

On Twitter, Stewart said the city needs to update Google to mark Adelaide as under construction as some people may not know its scary condition, including food couriers.

Comments on the city's tweet about the closure question its safety aspect.

"For cyclists there are few options….all parallel streets have construction, no designated bike lanes. Either go north to Bloor or south to the lake…without alternatives this can't be deemed a plan let a good one," read one very accurate response.