There's a new kid on the block hoping to keep Toronto's alt-publications scene alive and well.

The first issue of The Grind drops tomorrow!

The Grind is Toronto's new alt-weekly* style magazine, available in print for free.

Find The Grind on Monday at:

Launching today, a small group of dedicated writers, photographers and other media workers have banded together — without any financial backers — to give Toronto a "gritty, free-magazine."

The first edition is a hard but truthful look at the state of municipal, provincial and national affairs, including Doug Ford's "strong mayor" powers, the sad reality of the TTC's lack of connectivity, how to vote in the city election and the suing of police officers who forcefully cleared encampments last summer outside Lamport Stadium.

A quick read of the magazine's introductory page shows how local reporters banned together to deliver these pieces on the city's working class and issues often swept under the rug, something they say isn't routine with mainstream media. 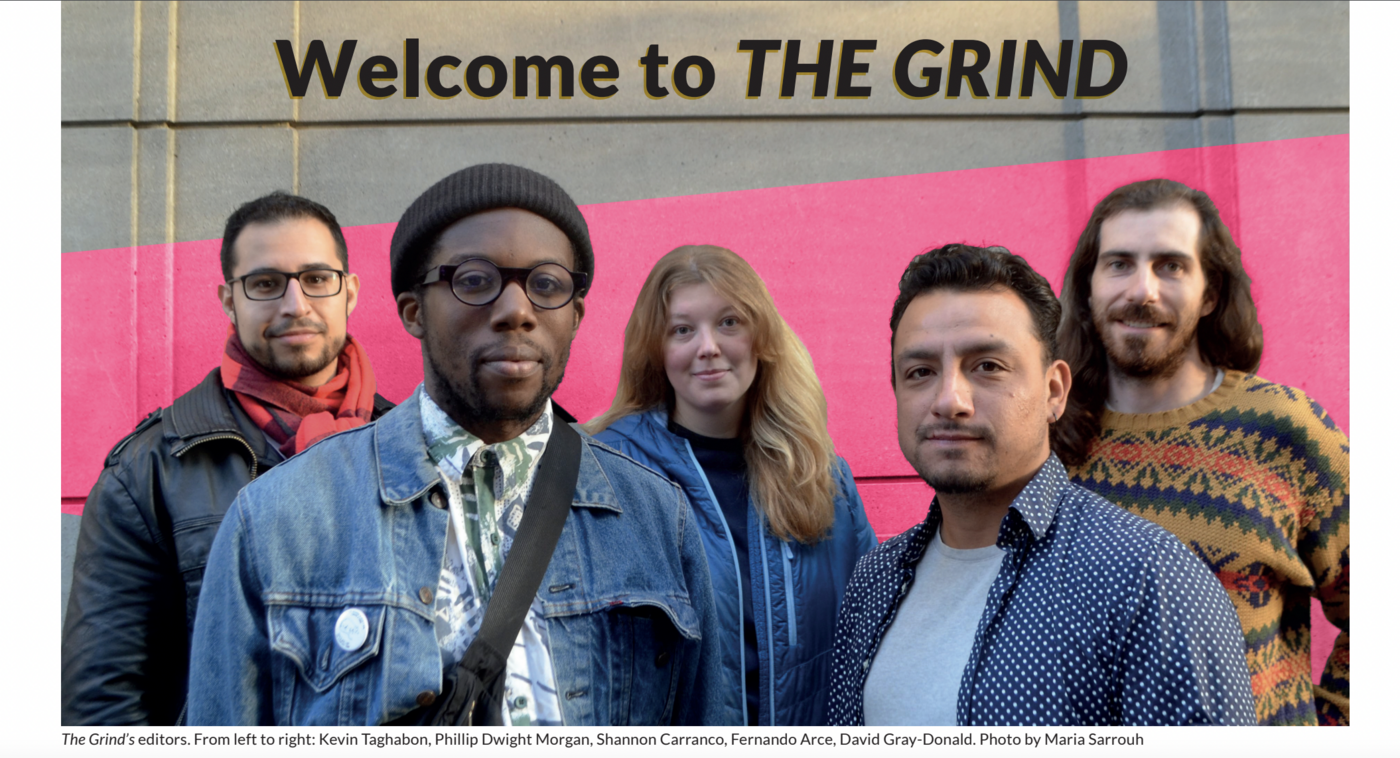 The editors of The Grind.

"But the decline of NOW, founded in 1981 by leftists and artists in Toronto, has lit a fire in us. We couldn't just sit idly by. So we, a small group each involved in independent online publications including The Hoser, Media Co-op, Briarpatch, PressProgress and others, dreamed up a new publication," reads the intro.

The end results is the first of (hopefully) many editions featuring republished progressive journalism and new writing and arts pieces.

This first issue came about voluntarily, meaning each reporter worked additional hours on top of their main jobs to bring the publication to fruition.

"We managed to scrape some money together," reads the introduction, "including money we donated ourselves and loans we gave the magazine, and it has been just enough to pay writers, photographers, designers and the printer."

There are two major differences between The Grind and NOW, first being that there really aren't any financial backers (i.e. tech bros or hedge funds) behind The Grind and that the magazine is not relying on advertisers to keep it rolling.

As such, there is a great need for donations to keep Toronto's newest publication alive.

Of course this is just the very-first edition, with the editorial team hoping to expand coverage to arts and culture, news and analysis pieces.

From the looks of it, The Grind is a deeply necessary piece of print media for Toronto residents and I, for one, look forward to its success.

Check out the Gateway Newsstands in TTC stations, Another Story Bookshop and Circus Books & Music on Mondays for new issues, with the next slated for December.