Cyclists and residents in Toronto's west-end have been sounding the alarm over the very dangerous conditions of a busy portion of the Bloor Street bike lane.

Let me introduce you to the infamous Bloordale Pond, a portion of the bike lane immediately at Bloor and Dufferin that has become a stagnant pond and sometimes ice rink.

Hi @311Toronto and @anabailaoTO
We have been bringing this to your attention for at least a year now. Winter is coming... This is dangerous. When is this going to be fixed. Lawsuits are just waiting to happen. Dufferin and Bloor #biketo #austerityTO pic.twitter.com/iJTDOIUlmV

Local resident and artist Shari Kasman has been emailing the city for months looking for a way to remedy the mess, she is also the brains behind its name.

As she tells blogTO, the pond didn't become an extremely annoying nuisance until the city put up a yield sign directly beside the bike lane, making it impossible for cyclists to divert the sludge water.

@311Toronto said the ponding ticket was completed, not sure what that means..but here we are 5 days later... ponding

I will send another complaint pic.twitter.com/wUJ5Lx8eiD

It's also nearly impossible to bike around the pond as it is situated in front of the New Horizons Tower where taxis pull up to drop off elderly residents.

New neighbourhood cabbages will surely draw our attention away from garbage-filled Bloordale Pond that the city refuses to take care of pic.twitter.com/bQ8Tjkxpjx

Kasman says the flooding is due to inadequate draining, place on the other side of the ride, where the pipe is extremely thin and basically does nothing.

"A cigarette butt could clog it," she says. 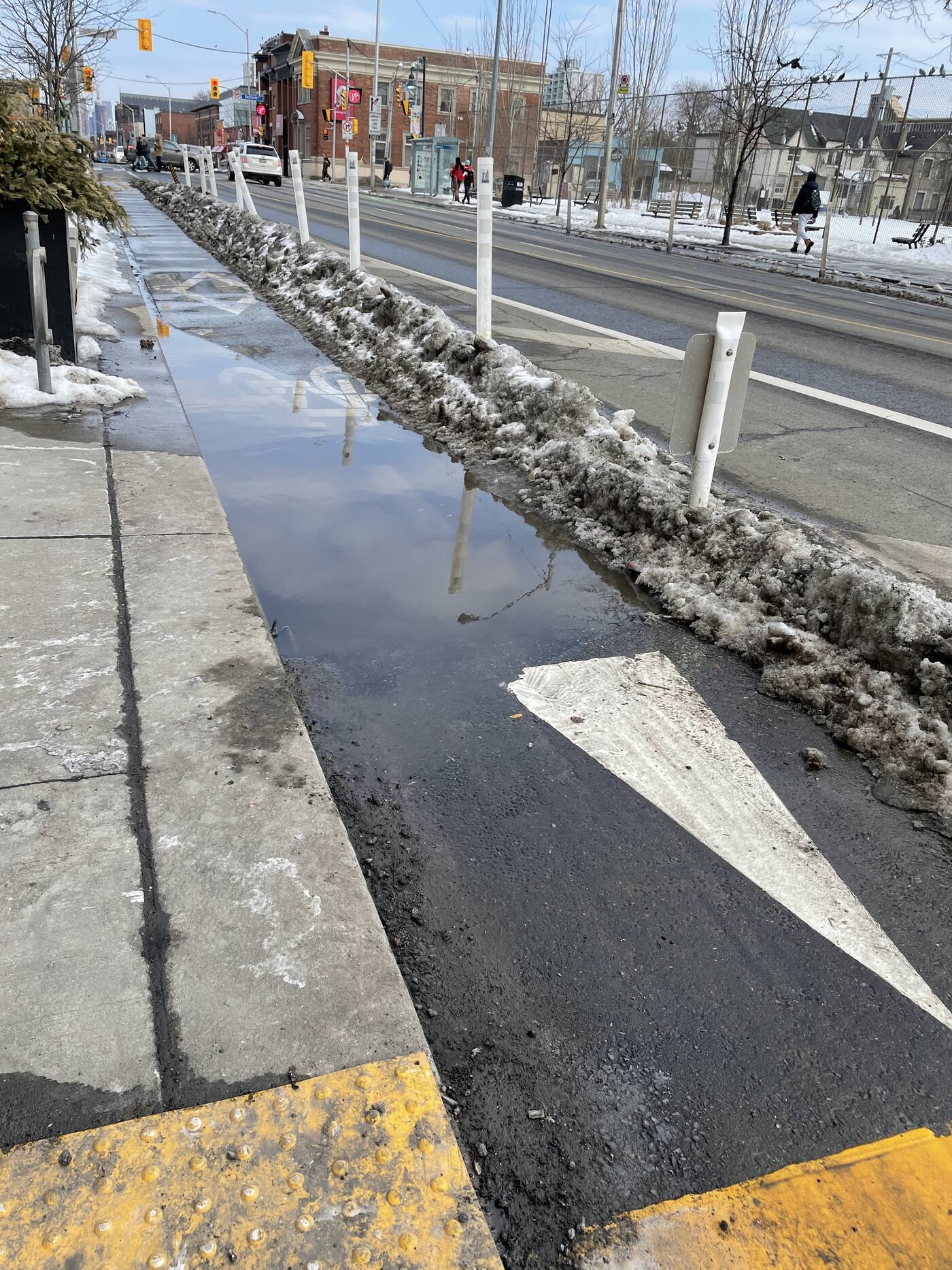 Frozen shot of the Bloordale Pond. Photo from Shari Kasman.

It happens so regularly that if you search up Bloordale Pond it's actually listed on Google.

A statement from the city sent to Kasman last winter and forwarded to blogTO states that "unfortunately, ponding will occur due to the change in temperature and we are looking into solutions for this issue."

So, what does the city say now?

"City crews investigated the site and are currently working on a permanent solution to the issue of a blocked drainage pipe at this location. In the interim, bike lane sweepers will be cleaning and draining this location more often to make sure it's safe and passable until a permanent fix is installed."

Watch out for the pond, bikers!