As Canadians continue to suffer under the weight of bloated prices at supermarkets, gas pumps, restaurants, liquor stores, monthly bills, and everywhere else, it's becoming apparent just how diverse the impacts of record global inflation have been on residents.

New numbers from Statistics Canada show that while absolutely everyone is feeling the financial pressure lately, certain demographics — including the nation's young people and its lowest earners — are being hit the hardest.

Rising inflation is stressing out everyone in Canada and here's what's going up in cost next https://t.co/dGAyKPt4to #Canada

The agency's latest report, released on Monday, indicates that these groups have seen the most dramatic declines in their disposable income, with those under age 35 seeing a 2.6 per cent decrease compared to this time last year, and those in the lowest income range (the bottom 20 per cent of earners) seeing a 5.7 per cent drop, on average.

Under 35s have also seen their overall net worth decline at the fastest pace of all age groups, down an average of 8.2 per cent from the first quarter of this year to the second.

Though the report notes that everyone across the spectrum has had a harder time saving since inflation began running rampant, the income gap between the richest and the poorest citizens has grown a concerning amount from the first quarter of the year to the second, and is now the highest it's been since the start of the pandemic.

Disposable incomes have fallen the most for the lowest earners and the youngest people in Canada. Chart from StatCan.

"Inflationary pressures had a negative impact on net saving, regardless of demographic or economic characteristics, as cost-of-living increases outweighed growth in disposable income," StatCan writes.

"Households in each income quintile increased their spending on most goods and services, especially on food and accommodation services, clothing and footwear, and transport." 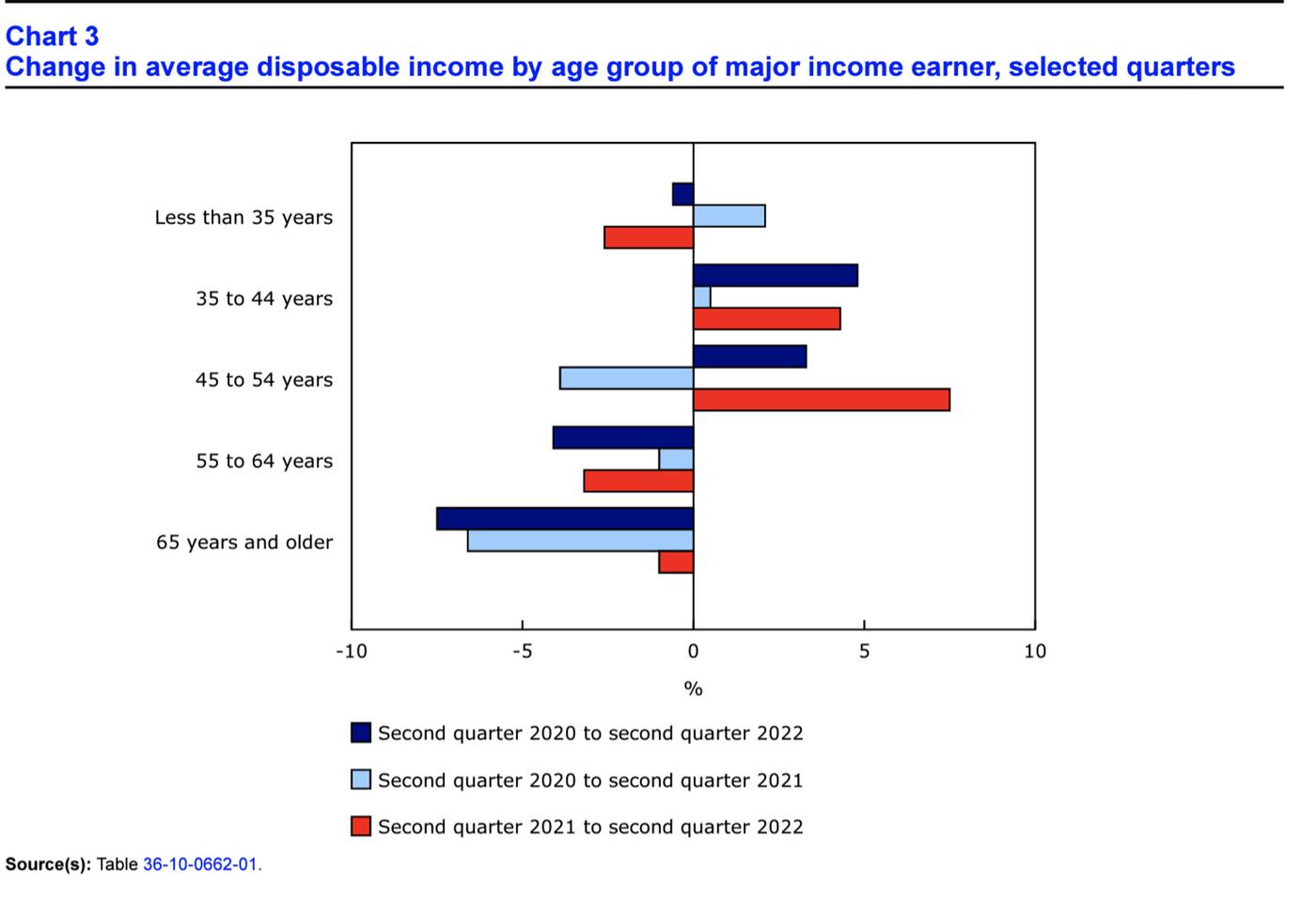 After recovering somewhat from 2020-2021, the under-35 age group in Canada saw steep declines in disposable income from the second quarter of 2021 to the same time in 2022. Graph from StatCan.

Of course, those with more capital have been able to better cope with the current economic landscape, while those in the lowest income quintile have been the most affected by things like the loss of CERB and other supports that came in during the health crisis.

But, the lowest income households were able to grow their wages and salaries more this past quarter than the top grossing households (11.3 per cent vs. 1.2 per cent), though their average disposable income comprises only one-seventh of that of the top 20 per cent of earners.

"Average wages for vulnerable groups, such as those in lower income quintiles and younger age groups, tend to be more significantly affected by shifts in economic conditions. Over time, the ability of vulnerable groups to maintain their average net saving and economic well-being will largely depend on their ability to secure higher wages in the face of labour shortages and on-going inflationary pressures," the report continues.

"In general, households in higher income quintiles and core working-age groups tend to be better equipped to weather economic storms due to their higher skills and more secure jobs."

Prices for these basic items are going up even more in Canada but for a new reason https://t.co/bozukfmACQ #Canada

As inflation gradually slows its roll, other factors are coming into play to keep prices high, including new credit card processing fees and the falling Canadian dollar.