For those who weren't aware, Toronto's Parks, Forestry and Recreation department has its own saying that deems the 6ix "A City Within A Park" — but data from Statistics Canada shows that, at least compared to other places across the country, this isn't exactly the case.

Though we do have more than 1,500 parks, there are may other places nationwide that beat us out when it comes to green space.

Statistics Canada laid all of the data out in a graph that compared the "urban greenness" of various large population centres in 2001, 2011 and 2019. 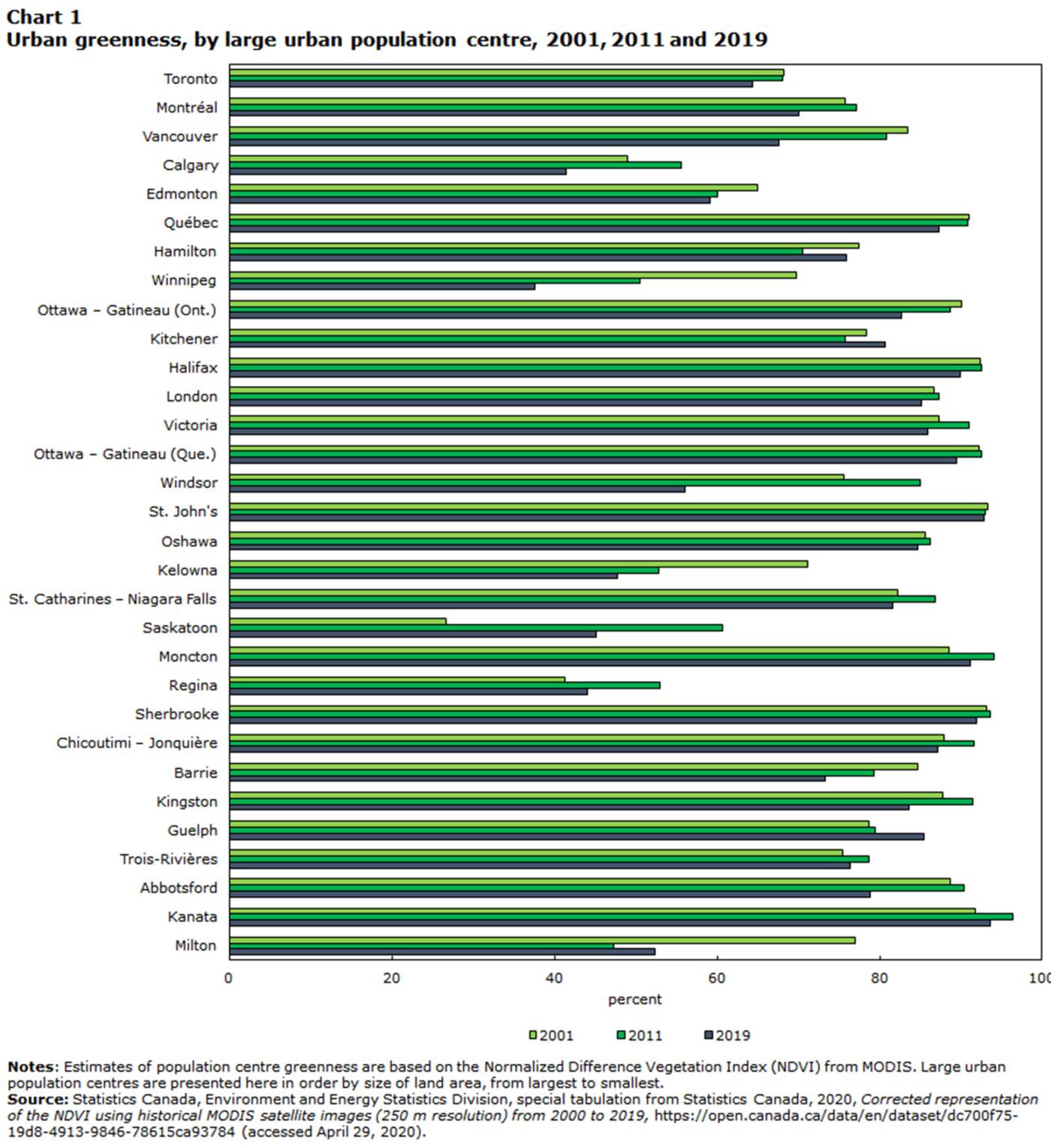 When put head-to-head with other Canadian locales, Toronto isn't the "city within a park" that it says it is. Graph from StatCan.

The chart showed that while Toronto is estimated to have about 65 per cent urban greenness, a ton of cities beat us out. Of the 30 other cities examined, only nine were rated lower, including prairie cities like Calgary, Edmonton, Regina, Winnipeg and Saskatoon.

This is interesting given that Toronto is the largest city on the list in both population size and land area, and that green coverage in metropolitan areas has been scientifically linked to a lower mortality rate and is often inequitably distributed, too.

Though the overall average was 75.7 per cent greenness for all cities listed, we didn't fall too far below the average for large centres, which was found to be 69.9 per cent in 2019.

But, Toronto was not among the eight locations where urban greenness did not drastically drop off, but stayed about the same or actually increased from 2011 to 2019.

We've been working on seeing how access to green spaces for Toronto residents are not equal. Still very early in our results, but its very obvious that there are large sections of the city where the closest public green space is kilometers away (non-shaded areas) pic.twitter.com/FKLVjO4P8V

As far as the slogan goes, though, maybe we'll have to have an NBC's "Parks and Rec" style town hall to find a more fitting one — something that we know Torontonians are very good at coming up with — or try to push for more greenery and park space, which many feel John Tory didn't make enough of a priority in his last term.

Unfortunately for those that would love more parks, urbanization/densification and a dire need for more housing naturally lead to "significant reductions in the quantity and quality of ‘green' areas and related increases in 'grey' areas," StatCan notes.