Riding a bicycle is by far, with very few exceptions, the fastest way to get around downtown Toronto... if you can actually hold on to one for more than a year before it gets swiped.

Chronic thievery is one of many factors driving the explosive growth of Toronto's bike share system, alongside an increased interest in outdoor fitness options, unreliable public transit and traffic conditions that make driving to work impractical for most people.

Who wants to deal with an hour of gridlock every morning when they could literally glide to the office in 20 minutes?

Nobody who knows that there are other options, it seems; Bike Share Toronto has been seeing record ridership numbers week-over-week and year-over-year since lockdown times, according to officials, with rides forecast to reach 4.3 million by the end of this year, as compared to 3.5 million in 2021.

"This jump in numbers tells us how important Bike Share is for Toronto's transportation network and explains why the Toronto Parking Authority has developed a four-year Bike Share Toronto Growth Plan being released this month," Bike Share Toronto director Justin Hanna tells blogTO.

And you can bet the service will grow in popularity even more once the masses discover that they can rent out e-bikes at no extra cost. 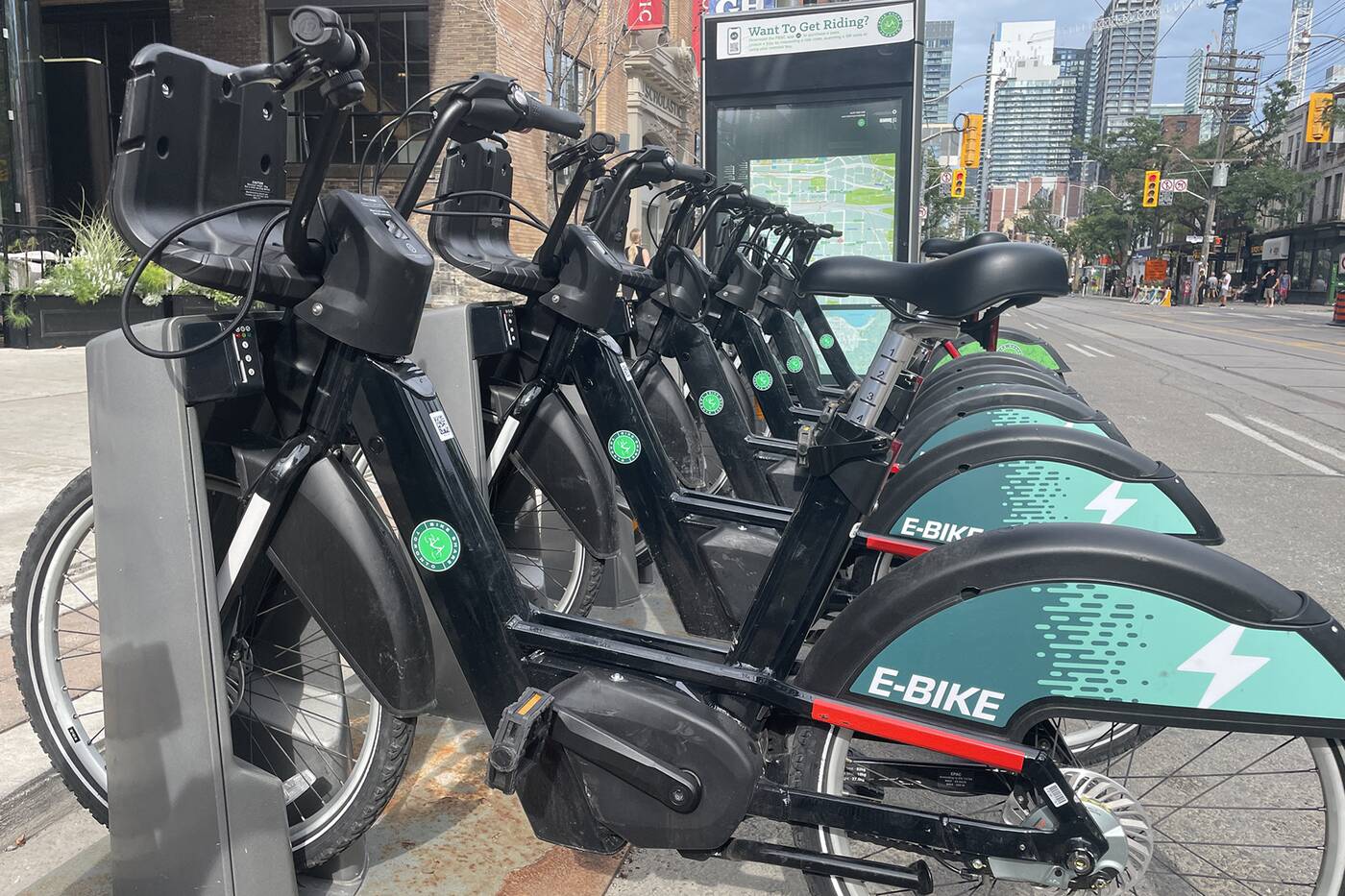 Not to be confused with vespas, mopeds, or even regular electric bicycles that can be driven using nothing but one's hands, Toronto Bike Share's electrified vehicles require some pedalling – but barely.

I must say, it's a beautiful feeling, especially when heading north (did you know that most of Toronto slopes downward toward the lake? E-bikes are great for battling that slope).

"Toronto Parking Authority began an e-bike pilot program in late summer of 2020 with the addition of 300 pedal assist e-bikes and 10 e-bike charging stations as part of the 2020 system expansion," Hanna told blogTO.

"Due to the popularity of the e-bikes, the pilot became permanent this year with plans to add 12 new e-stations by the end of 2022 for a total 15 e-stations serving 525 e-bikes."

It would appear as though many Bike Share Toronto members have already discovered the joy of hopping on pedal-assisted bikes. Hanna says that more than 60,000 e-bike rides were taken this August alone, compared to about 3,000 in August of 2021.

I can say with 100 per cent certainty, however, that the former number would have been even higher had more of the e-bikes chilling in Toronto Bike Share racks actually worked as intended... or at all.

After having no less than five bicycles stolen or maimed beyond the point of repair, I finally signed up for a Bike Share Toronto membership last year.

I've been using the service nearly every single day (when weather permits) since buying a membership, and haven't had many problems (save for stations sometimes being empty when I want to take out a bike and full when I want to park one) until I encountered my first e-bike this summer.

That first ride in June was a game-changing experience. I gleefully hopped on two more e-bikes in the week that followed, but that was the end of my pedal-assist fun.

I've tried to rent out at least a dozen different e-bikes at Bike Share stations over the past two months only to be greeted with an error message stating "Sorry, this bike is in maintenance. Please try to rent another bike."

King and Portland, Dundas and Crawford, Spadina and Sussex, Bloor and Christie, Lynn Williams and East Liberty, College and Crawford, Dundas and Carlaw — I unsuccesfully tried to rent out e-bikes at all of these stations, some containing as many as seven electric bikes in their docks.

Some appeared to contain a charge, suggesting that this wasn't simply an "out of power" situation. 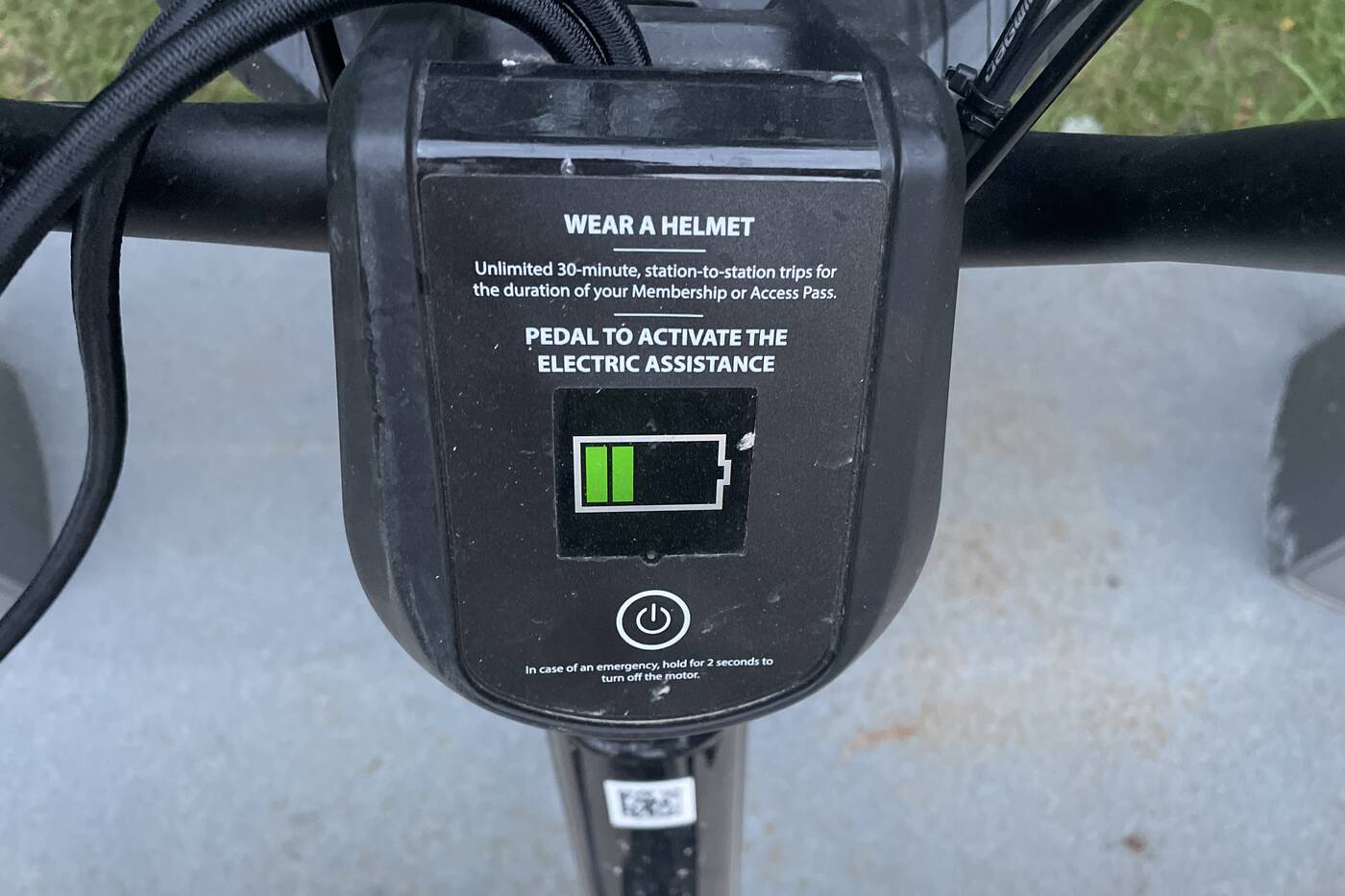 Hanna acknowledged that there have been some kinks in the roll-out of Toronto Bike Share's e-bikes.

"Keeping up with the demand for e-bike rides has been challenging with the volume of bikes in circulation directly related to the system's current charging capacity," he told blogTO when asked about the frequent error messages I'd been served.

"This means only about half of the bikes are in circulation at any given time while the rest are 'in maintenance' or being charged."

The Toronto Parking Authority, which purchased the bike share service back in 2014 when it was still known as "Bixi," is investing in the electrification of its network with the goal of having 20 per cent of the fleet electrified by 2025.

Hanna says the number of charging stations will expand each year to help meet demand, though no specific goal numbers were provided.

"TPA is also researching international best practices that would provide faster more efficient charging capability to minimize the bikes' downtime so that we can continue to deliver the kind of user experience our customers have come to expect," he said.

"We have had extremely positive feedback from our customers about e-bikes. People find them convenient as they can go further and faster by bike with less effort, particularly when travelling uphill." 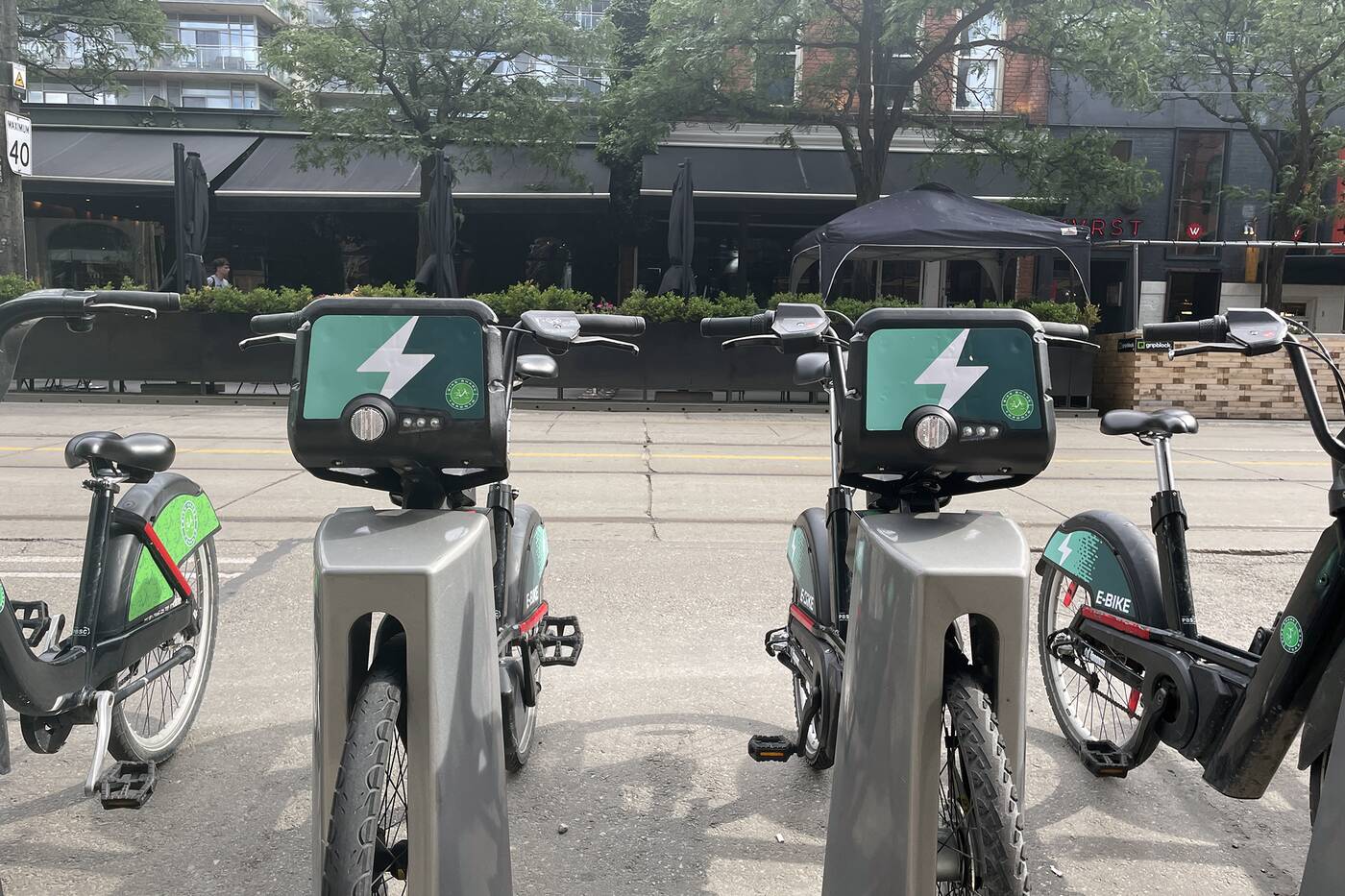 For whatever reason, many of the coveted electric rides feature damaged QR codes. Some are missing entirely, while others look like they've been scraped at by a key, rendering them unscannable with the PBSC app long-needed to rent a bike.

My assumption was that greedy jerks were somehow trying to reserve the e-bikes for themselves. Hanna could not confirm this.

"It's difficult to speculate why the codes are damaged. We aim to keep up with replacements, but the good news is that we have recently announced Bike Share's new mobile website which allows you to purchase short-term passes and unlock bikes directly from bikesharetoronto.com," he said.

"It is convenient for visitors and quick guest checkouts, as it only takes less than a minute to purchase a pass, request a code to unlock a bike. No need to download an app. Additionally for those customers who use the app, they do have the option to produce a 5-digit code that will unlock the bike should the QR code not work."

Vandalism is also a problem on occasion, both at stations and of individual bicycles.

"This is upsetting not only because the equipment is expensive, but because we have to expend effort that could be better used rebalancing the system," said Hanna.

Annoying as the idea is of people vandalizing bike shares, taking wheels off the street that could be used by commuters who need them, it's hella more annoying to find out that the rims on your beautiful Schwinn cruiser have been stomped in by someone who couldn't break through your lock.

Another good reason to use Bike Share now that e-bikes are in the picture is cost: Individual pedal-assist bicycles start around $2,000 each. A hefty price to pay for something that, without extreme security measures, will almost certainly get stolen or damaged.