Have you accidentally misplaced several four-storey-tall piles of dirt and debris? Some Toronto residents would like a word... though I can't promise it'll be a nice one.

The site of the old Toronto Weston Flea Market has become somewhat of an eyesore (and potential lung irritant) since closing down for good in late 2019, according to people who live nearby, and it's not because of building dilapidation, graffiti, encampments or anything else that one might expect neighbours to complain about.

No, people living within ear and eye-shot of 404 Old Weston Road are dealing with an obscene amount of rocky, sandy soil — more and more of it all the time, it seems, as trucks regularly arrive to offload batches of soil without explanation or apparent permission.

"I just got back from six weeks abroad and was shocked to find the empty flea market site near my house turned into an outdoor storage facility for soil," said Davenport resident Noelle Pittock of the parking lot sand dunes.

"The dirt is not tied to the two active condo construction sites nearby, at the corner of Old Weston Road and St. Clair. Those companies actually paid for daily water spray trucks to wet the roads and soil that was displaced as part of excavation."

Lamenting that this has been going on for weeks, Pittock said that her neighbourhood "has seen a steady stream of incoming dump trucks each day, filling up with this mysterious dirt."

Locals are frustrated by the extra traffic, noise, pollution and deterioration in air quality. Says Pittock: "The roads are full of large gravel pieces and dust, and the dust is thick the air is hazy." 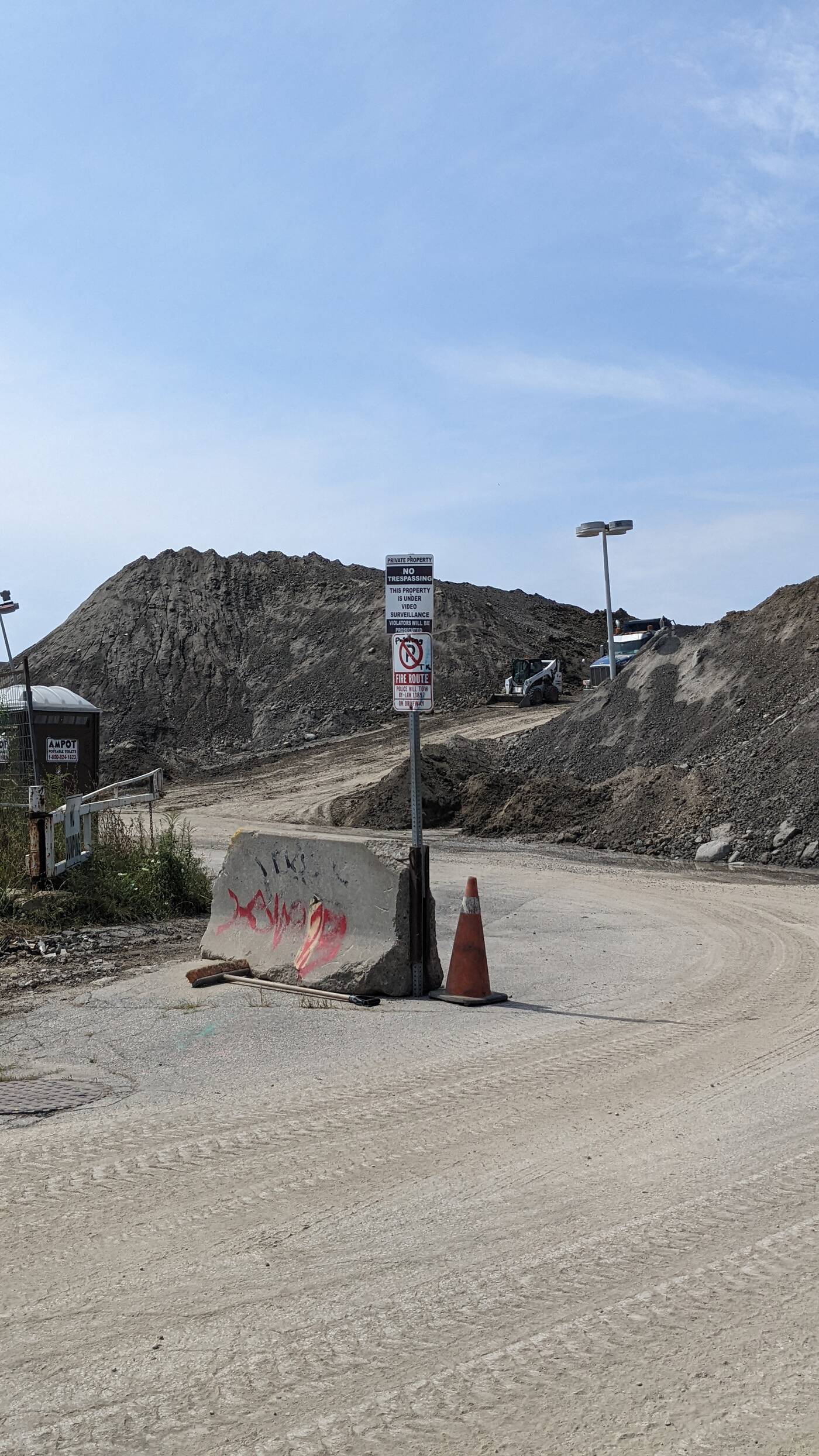 This mysterious pile of dirt is has formed over a matter of weeks, rising so high that it's pushing over street lights and billboards. Image via Nicole Pittock.

Curious about when the dust madness might end, Pittock contacted the City of Toronto, which she says was unaware at the time of "dirt piles so large and tall they are literally crushing electric light poles in the parking lot."

She is confused as to "why the City of Toronto cannot account for a vacant parking lot in a residential area of the city, being converted into a massive dumping ground for 3 to 4-storey-tall piles of dirt."

"If an empty parking lot in a neighbourhood like Rosedale, Forest Hill, Bloor West or Baby Point, suddenly became a resting spot for this amount of dirt, you can bet the city or local councillors would have some idea of what is going on," Pittock said.

"You can also bet the residents would be freaking out that their streets are filled with dust and rock, that they do not know what is in the soil, and that there are no valid permits tied to this site."

The City of Toronto confirmed to blogTO this week that it wasn't quite sure what the pile is about.

"The City is investigating the activity taking place at 404 Old Weston Rd. and once our investigation is complete, we will be in a position to provide further information," said a spokesperson for the city.

"Note that the City did not issue building permits to use this property as a temporary site for construction debris or waste." 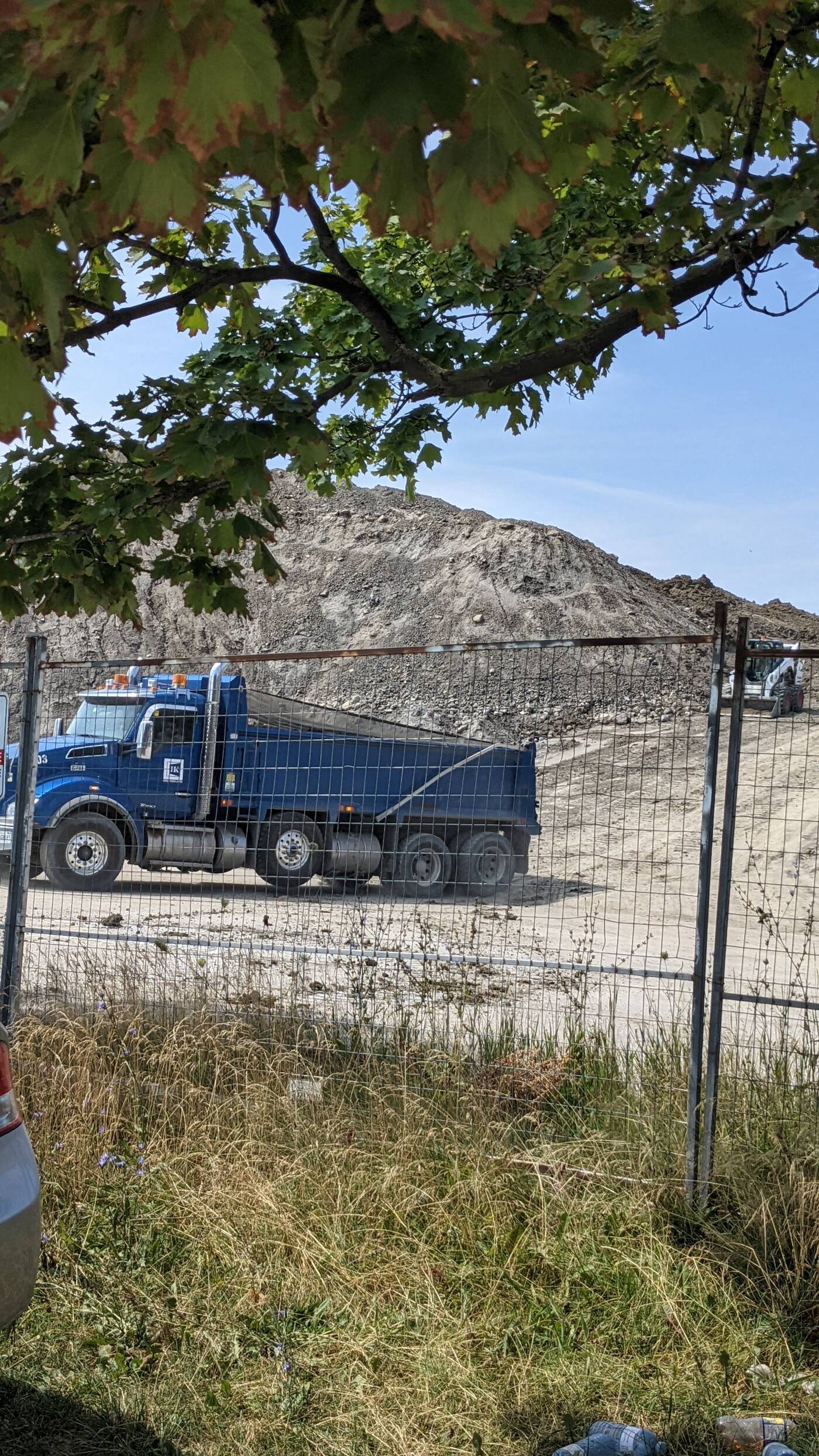 Residents can see see trucks coming to the site daily with new loads of dirt to drop off. Nobody knows (or will reveal) who is behind them. Image via Nicole Pittock.

Deputy Mayor and Ward 9 City Councillor Ana Bailao, who represents Davenport, has not commented publicly on the matter. Her office did confirm last week, however, that it is similarly uncertain about the dirt's origins.

A representative for the veteran councillor, who is not seeking re-election, said on Friday that "city investigators did visit the site and that their work continues."

The rep told Pittock herself via an email seen by blogTO on Friday that "the materials are now in the process of being removed from the site and that process will continue until all of the materials have been removed."

As of Monday, August 15, the piles remain in place. No official removal date has been given.

Pittock and her neighbours were pleased to learn that the dumping would stop, but remain skeptical about the city's claims that the dirt poses no threat to anyone's health — especially given the fact that nobody will confirm where it came from or who put it there.

"[Bailao's staff] allege they've been in contact with the dirt owners and that it isn't contaminated," she said on Monday. "My question is this: If the city doesn't know, then theoretically the councillor's office shouldn't know... So either the city knows and is investigating and they just aren't confirming the name, or the city councillor's office knows and won't name names."

Concerned about the pile's location in proximity to a children's playground and community garden, locals simply want to know at this point where the debris originated.

"We need to know where it came from, who did it, what's in it, the date it's going to be gone and if there are any repercussions," said Pittock.

"It's been two weeks with no answers other than 'they're looking into it, they didn't know, and it will go away soon."