Toronto Island just got a brand new beach, but if you tried to go there a couple of years ago, you would've been standing waist-deep in Lake Ontario.

The islands are constantly changing shape due to erosion, and recent years of flooding and high water levels have not been kind to the southern coast facing the open waves and currents of the lake.

After substantial damage to the area of Gibraltar Point during a 2004 storm and subsequent emergency coastline repairs, the Toronto and Region Conservation Authority (TRCA) set out on a long-term plan to repair generations of erosion damage exacerbated by human intervention.

Erosion has always been a factor in the shifting shape of the island's south coast, but modern human-made landforms like the Leslie Street Spit and the artificial islands at Ontario Place have blocked new lake silt from depositing and naturally maintaining the island's coastline. 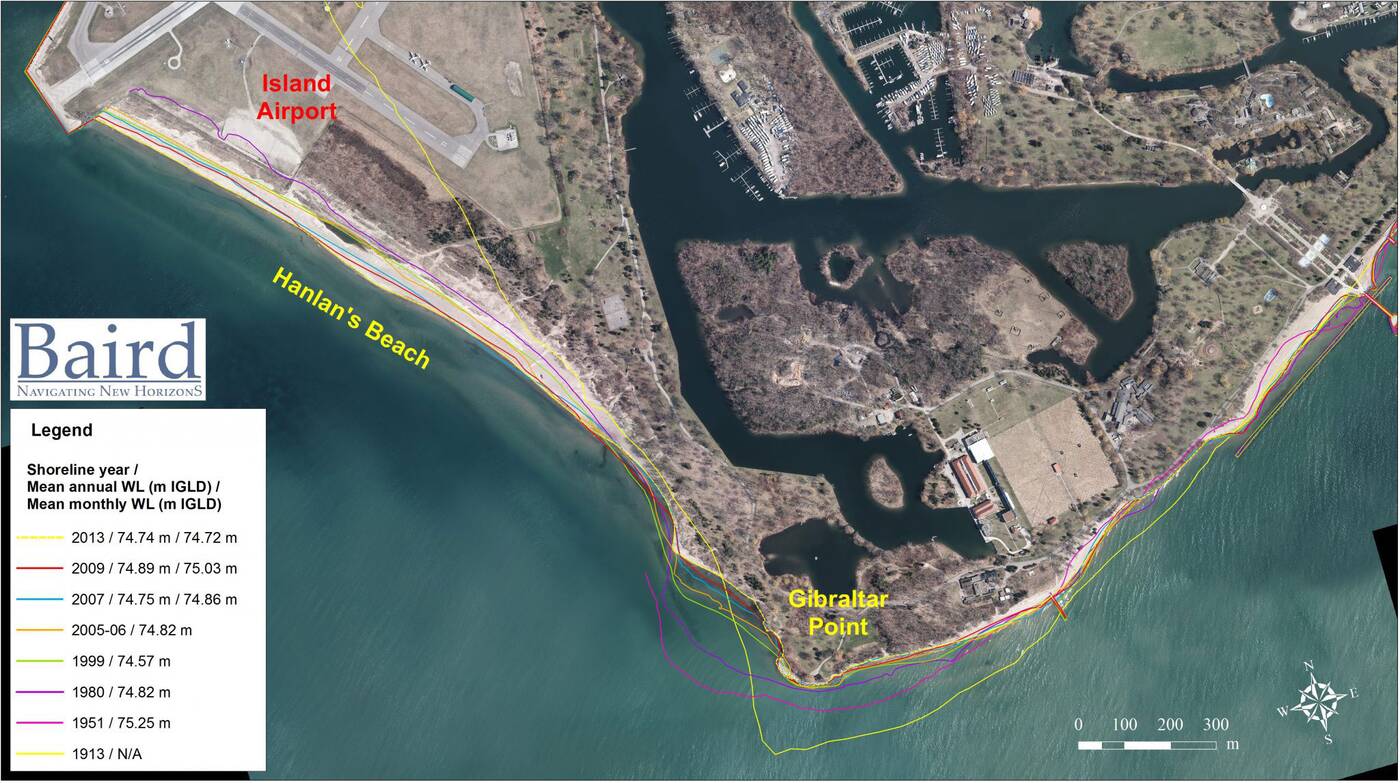 Diagram showing the changing shape of Gibraltar Point through 2013. Image via TRCA.

Human intervention may be to blame for the crumbling coastline, but sometimes, you just have to fight fire with fire.

The Gibraltar Point Erosion Control Project may not have been able to undo the underlying problem of replacement silt deposits being blocked by other artificial spits and islands, but it has shored up the coast with a new beach, sand dunes, and more features to cement the coastline in place.

And there's some pretty spectacular engineering hidden below the beautiful sand and waves of this new beach just west of Gibraltar Point along the southwest coast of the island.

New beach alert! The @TRCA_HQ has restored the south shoreline of the Toronto Island to 1980s levels after decades of erosion. All that land btw the existing vegetation and the new fence will slowly be vegetated. The roots systems will be essential to keeping the dunes in place. pic.twitter.com/BfDJVwelO5

But that wasn't the end of the project, as crews began constructing a new natural dune habitat on the site from late Spring to Fall 2021, followed by a planting program this past Spring.

Artist, writer, and cartographer Daniel Rotsztain shared a video of the new dunes and beach, which are currently only accessible via a fenced-in walkway so as to allow the new vegetation supporting the dunes to take root.

Rotsztain is pleased with the project's results, telling blogTO that "they're working with nature, in order to strengthen the island to protect it from erosion. And I think it's like, it's a great balance that they're striking between human engineering and natural solutions."

It's a balance that has generated immediate results, not just for the health of the shoreline but the ecology it supports.

The TRCA noted in October 2020 that "aquatic life has already been observed living within the nearshore reef structure" that had only been completed that July.