Developers Ivanhoé Cambridge and Hines have finally wrapped up the first tower in their long-awaited CIBC Square office complex across from Scotiabank Arena as construction kicks into high gear for a second-phase tower to the north.

The tower's opening in downtown Toronto comes with a brand new park unlike anything else in the city, elevated on decking above the Union Station rail corridor that will act as a literal bridge between the Financial District and the South Core area.

Positioned four storeys above the tracks, the park offers unobstructed views of nearby landmarks like Toronto Island, the Hockey Hall of Fame, the Scotiabank Arena, and the CN Tower.

It also offers enhanced Wi-Fi, giving office drones of the 49-storey tower above a peaceful outdoor environment to get their work done. 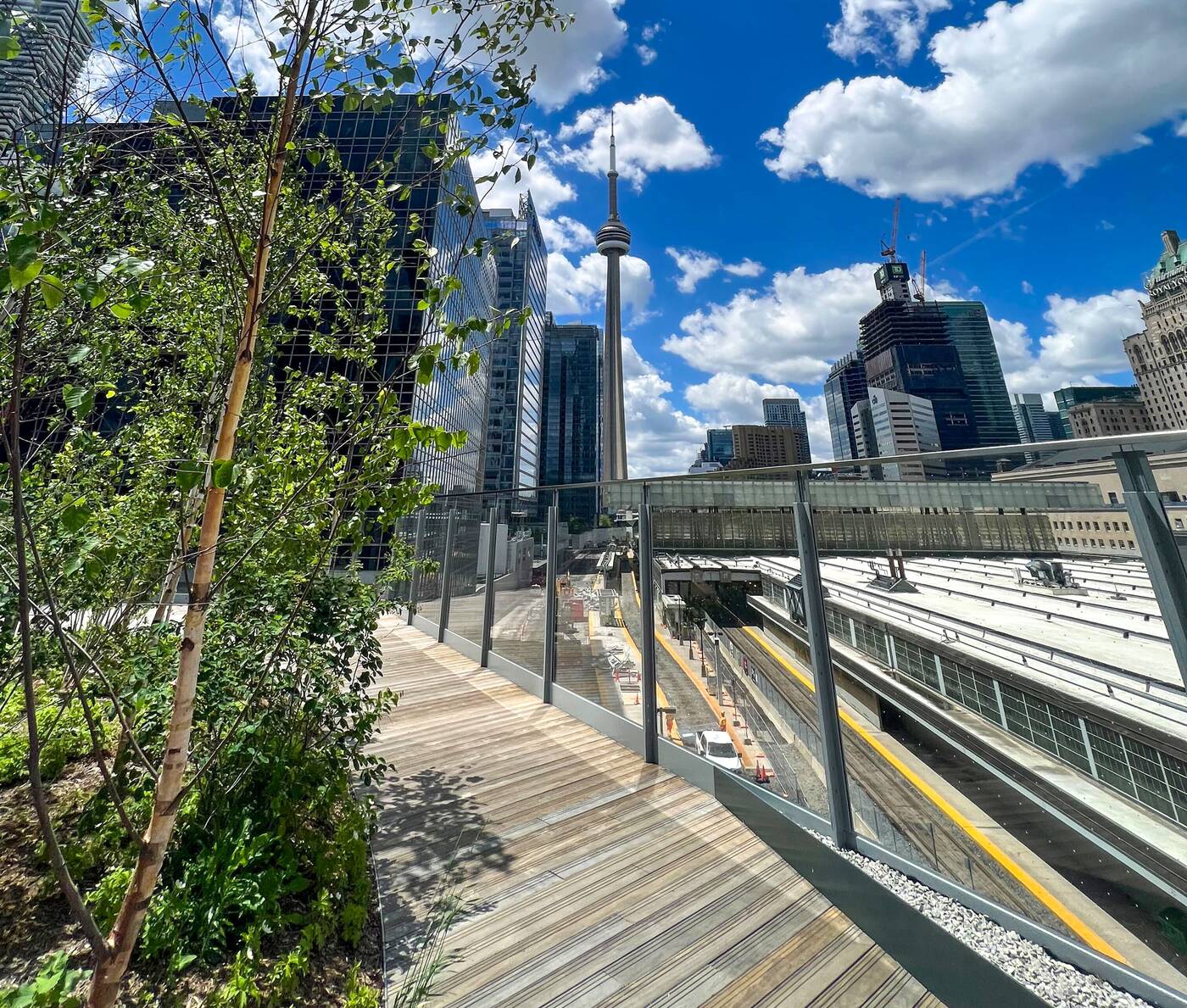 Unfortunately, the park's recent opening didn't go off without a hitch, and for the first few days it was open to the public, reports flooded in of security forcing photographers to vacate the space, even ones who were just using their phones.

This is an illegal photo of the demolition at Union Station. Why? Because @CIBCSQUARE (operated by @Hines) forbids ALL photography on their property, even if it's a selfie. There are more security guards than people in the park right now. Privately-owned public spaces are awful. pic.twitter.com/AbMIGQyaY0

In a twist of irony, renderings of the park were produced to show people with their phones out snapping photos of the skyline and adjacent rail corridor.

I would have really liked to check out the park at @CIBCSQUARE today, unfortunately it sounds like security is harassing people taking photos. Which is really too bad for a space that is supposed to be public, and you might want people to enjoy!

Security even forced members of the blogTO team to leave during an attempt to record phone videos of the new space.

Despite getting kicked out on my way out, CIBC Park is kinda nice. pic.twitter.com/aDGg1bM00F

It's a move that angered both photographers and railfans looking to get a view over the tracks.

So, a picture with a camera is forbidden? @CIBC is ASKING for a #PRfail with this one.

Why does a customer facing business want this #CustomerExperience for potential clients? No one is going to say, “Lemme get a mortgage from the bank that harassed me in the park.” pic.twitter.com/b53mrLBaHq

blogTO reached out to the building's management for an explanation as to why people were being kicked out of a park that is officially designated as a privately-owned public space.

Absolutely ridiculous! @cibc, what’s with the No photos policy? People want to enjoy every aspect of the park.

A representative tells blogTO: "It has come to our attention that there was some confusion relayed in regards to photography in the park. We typically don't allow photos in a construction zone, however, The Park is open and photos are allowed."

"We apologize to our tenants and visitors for this miscommunication and have since ensured our security team is aware and aligned with our intent. While The Park is open, it is still not fully complete. There will be an art installation taking place next week and we expect all finishing touches to be complete later this summer."

But apparently, people are still being forced to leave the park on the grounds that they are pointing their camera in a direction the owners don't like.

Minor update, visited today and took photos with my cellphone. Security came over and declared, "no photos of the construction. Photos of the park and building are allowed." Out of annoyance, here is a photo of some apparently taboo construction: pic.twitter.com/M2Yo6Mc2rQ

This new park may be open to the non-camera-wielding public, but it is far from complete.

The section now welcoming visitors is just the first phase of the elevated park, and the park's northern half is now under construction alongside the second phase tower.

Steel decking is already fully installed to support the park's second phase, with work on the park extension and office tower podium for CIBC Square 2 expected to wrap up in 2024.