Underneath some of the busiest streets in Toronto, Indigenous burial grounds once rested.

One such site, known as the Sandhill burial site, is thought to have been near Yonge and Bloor streets.

Sandhill was a burial site of the Wendat and Mississauga Peoples but by the early 1800s the site was buried beneath the rapidly growing city of Toronto, Jon Johnson, a University of Toronto assistant professor, said back in 2019.

"It's very common for people to think there isn't much Indigenous history in Toronto," Johnson told the U of T News. "The official histories were vague or they focused on the coming of Europeans, York as a colony and all the European accomplishments."

Like an unmarked Indigenous grave near High Park, this place is likely not well known.

"The locations of archaeological sites are not generally marked to protect them from intentional disturbance and looting," Denelle Balfour from the Ministry of Heritage, Sport, Tourism, Culture and Industries told blogTO.

Archeologists have reported 76 combined burial sites for Indigenous and Euro-Canadian remains within the GTA to the Ministry of Tourism and Culture but Indigenous sites are not often marked, according to a Toronto Star story. 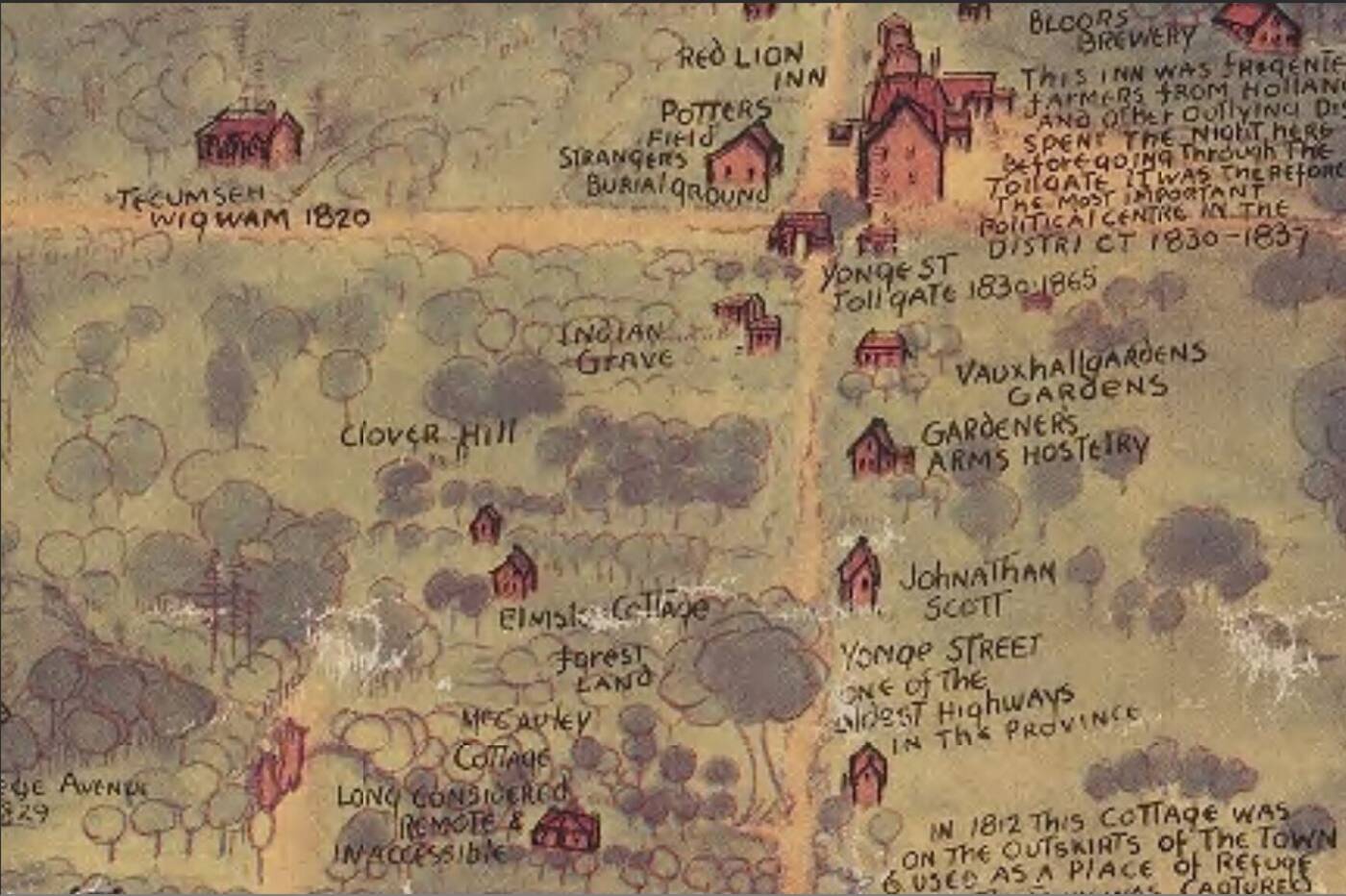 The Sandhill burial site was noted on an 1834 map of Toronto published in 1934 as a centennial celebration.

Balfour told blogTO the ministry does not have any documentation about human remains or artifacts from the Sandhill site but the location was registered as an archaeological site in the province’s archaeological sites' database in 1971.

The site is also listed with the Toronto Historical Association.

The area near Yonge and Bloor was known as Sandhill, according to Toronto of Old (1873) by Dr. Rev.Henry Scadding.

Scadding says back in 1813, when the U.S. forces were attacking near Humber Bay, an Indigenous man with the British forces was killed. His body was taken and buried "on a crest of the Sandhill, where an ancient Indian burying ground had existed, though long abandoned." 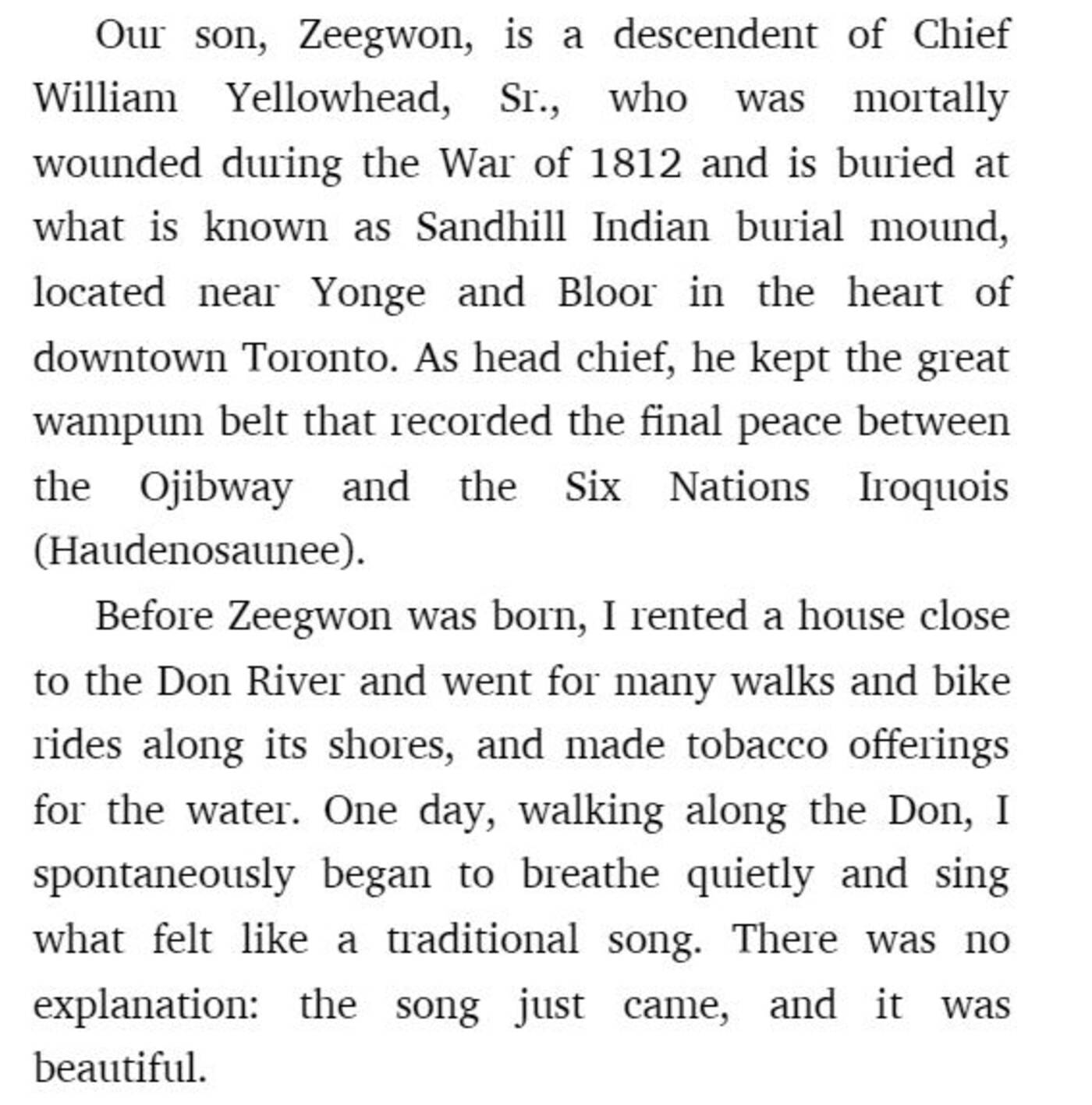 The story of Zeegwon an Indigenous man killed and buried at Sandhill is written in Wasauksing-Vancouver-Toronto - My Path Home - Tabobondung (2016).

The name of the Indigenous man is not mentioned in Scadding's account, only that he was "Major Givin's Indians" and he shot at the U.S. troops entering the harbour before dying.

Scadding adds that "building requirements of the present day occasioned the almost complete obliteration of the Sandhill." The remains of the people in the grave were "carted away."

The burial site is also noted in J. Ross Robertson's Landmarks of Toronto (1894).

"The complaint as to disturbance of burial grounds related to the ancient Indian burial plot known as the Sandhill north of York on Yonge Street," Robertson writes. "Before the year 1813, the Indians had selected another burial ground and had removed there most of the bones and relics deposited at the Sandhill. The Sandhill is now completely obliterated."

The exact location of the site is up for debate — in some references, it is on the west side of Yonge Street near present-day St. Joseph Street or Irwin Avenue but other sources put it closer to Yonge Street and Bloor Street, Wynne says.