Ontario Northland's discontinued Northlander Passenger Train will be back in action sometime this decade, if Doug Ford's PC government sees its latest plan come to fruition, giving people all over the province a more convenient way to travel between Toronto and Timmins — with up to 16 stops along the way.

Speaking at a press conference in the latter city this weekend, Ford announced that his government would be investing $75 million to "bring passenger rail service back to Northeastern Ontario" by the mid-2020s, restoring a key transportation option for business and leisure travellers alike.

"The previous government chose to cancel this rail service, cutting people and economies in Northeastern Ontario off from the rest of the province," said Ford from Timmins on Sunday.

"At a time when our government is building up home-grown supply chains that connect resources, industries and workers in the north with the future of clean steel, electric vehicles and batteries, we're restoring this vital transportation link. We're getting it done and bringing passenger rail back to Northeastern Ontario."

We’re delivering the connected infrastructure to accommodate our growing province.

Our government is saying YES to investing in the North while connecting all of Ontario to the opportunities of tomorrow.

Friends, let's get it done pic.twitter.com/kgHw1vViqy

It's been nearly ten years since the original Northlander Passenger Train service was shut down in 2012, leaving only a few buses available for people to take between Toronto and northern communities such as North Bay, Timmins and Cochrane.

The abrupt death of Greyhound Canada in late 2021 further complicated intraprovincial travel — especially in the North, which has long been chronically underserved by transit infrastructure.

"Passenger Rail is very accessible, safe and comfortable for transporting people in any season, including winter, and people do not need a driver's license, the ability to drive, or the substantial expense of owning an automobile, to travel by train," argues the advocacy group Northern and Eastern Ontario Rail Network (NEORN), which has been fighting for many years to bring extensive train service back to the North.

"It is vital to the sustainability of our northern regions of Ontario that passenger rail services be supported, refurbished and reinstated otherwise we will become increasingly isolated economically and socially — something our northern regions and Ontario cannot afford."

The province appeared to agree when dropping its 2021 budget last year, including an initial $5 million to "support planning and design work on the proposed Northeastern Passenger Rail program."

Yesterday, officials revealed that the aforementioned $5 million support work had resulted in the approval of a more concrete $75 million plan to get trains running once again between Toronto and Timmins. 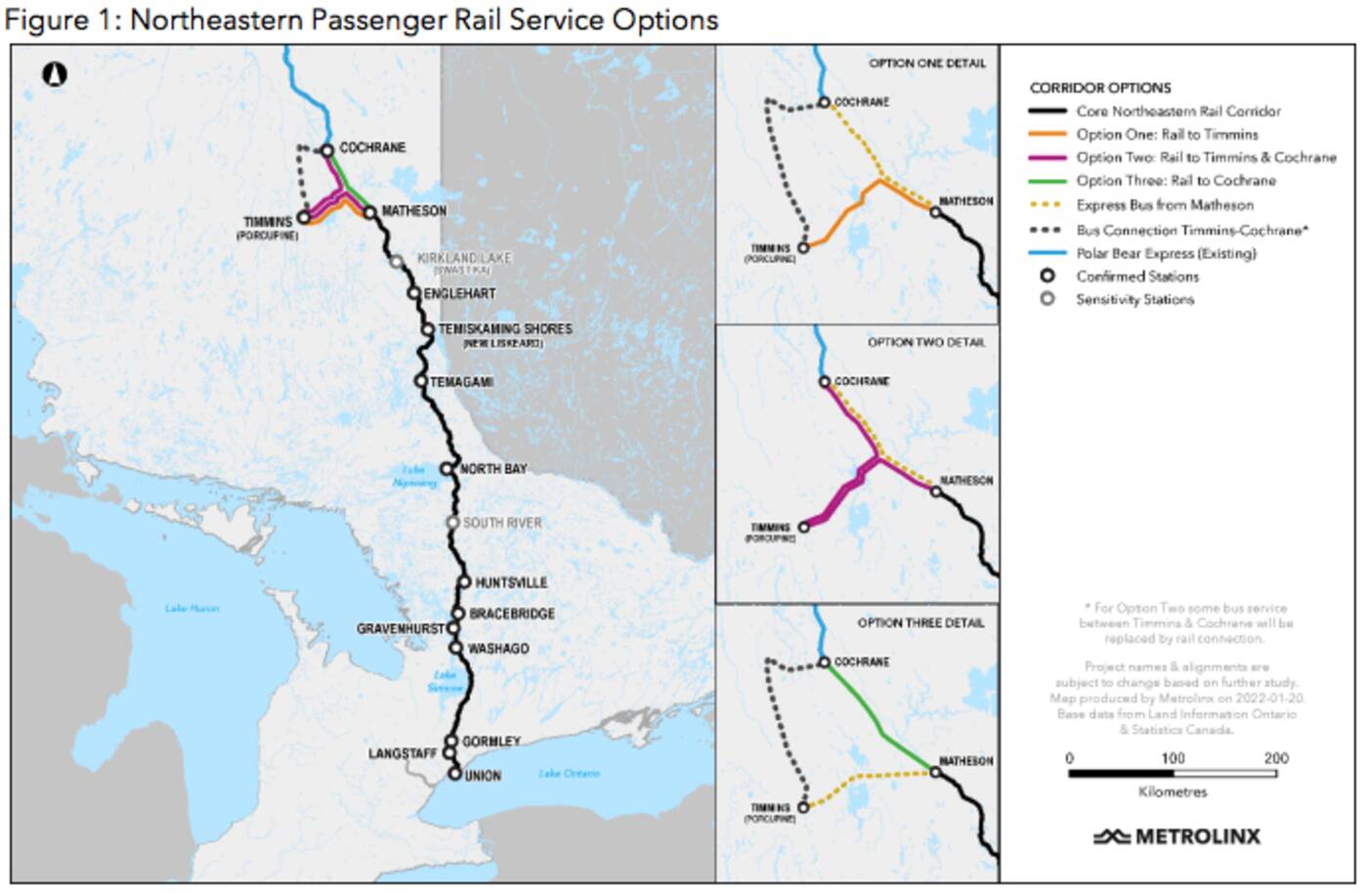 An updated initial business case for the project looks at three potential routing options, each option broken into two sub-options for a total of six different potential routes. Image via Metrolinx and Ontario Northland.

An updated initial business case released on Sunday outlines several options for passenger rail service along the old Northlander route, including the possibility of a new rail connection to Cochrane, "expanding the reach of this critical rail transit to 5,300 more people and providing a connection to Polar Bear Express service to Moosonee."

Ontario Northland's train service currently still runs four days a week between Cochrane and Moosonee, but getting to Cochrane in the first place isn't easy for travellers from Toronto, who must first take a bus to North Bay and then board another bus (one of only two of which run daily) from North Bay to Timmins and Cochrane.

The resumption of the Northlander passenger service would make travel significantly easier for everyone, particularly, as the NEORN notes, individuals who are "elderly, disabled and economically less fortunate."

"The return of passenger rail to Timmins is imperative to our region’s growth and prosperity. As a regional hub and with Porcupine as the future terminus location, we will most certainly see positive impact on our tourism and industry sectors," said the northern city's mayor, George Pirie, on Sunday.

"Residents will have another viable travel option to Toronto and points south. This is imperative for access to medical appointments and travel. It will improve our quality of life and the well-being of the community by strengthening access to and from Timmins and the north."

There's still plenty of work to be done on the project, including procurement and, of course, construction, but the province is aiming for a potential in-service date "in the mid-2020s."

"Passenger rail service will be offered based on seasonal travel demands and will range from four to seven days a week," reads a release issued this weekend announcing the $75 million investment.

"The rail service will provide passengers with access to reliable overnight travel options while commuting between Northern Ontario and Toronto."