Some perplexing events have been occurring in the skies of Toronto and the surrounding region, revealed in a stunning haul of information packed with over 500 reports of UFOs, or unidentified flying objects, from across Canada.

VICE News dropped over 300 pages of data (huge download warning) on Tuesday, obtained by the outlet through Canadian freedom of information laws, and some of the accounts in these official documents are pretty puzzling.

Spanning two decades, these "CIRVIS" reports (Communication Instructions for Reporting Vital Intelligence Sightings) were made to federal transportation authorities by airline pilots, confused residents, and even military personnel struggling to make sense of objects that don't seem to follow the rules of conventional aircraft.

Toronto and surrounding southern and western Ontario cities register some of the highest population densities in the country, so it should come as no surprise that a good number of these reports originate in this region. Though sometimes it's only just Mr. Peanut.

Some of the UFO reports were already known, like a well-documented but still-mysterious 2016 incident that saw a Dash 8 Porter aircraft with 54 passengers come dangerously close to colliding with an unknown object that still hasn't been identified to this day.

Originating from Ottawa, the Toronto-bound flight was about 55 kilometres east of Toronto/Billy Bishop Toronto City (CYTZ) at an altitude of around 8,300 feet when, according to Canada's Transportation Safety Board (TSB), "the flight crew noticed an object directly ahead on their flight path."

The report states that "The object appeared to be solid, approximately 5 to 8 feet in diameter and shaped like an upright doughnut or inner tube," and appeared to show no relative movement as it rapidly approached the plane.

The captain was able to override the autopilot and quickly descent, with the object passing to the right and above the aircraft, which eventually landed safely at Billy Bishop.

Still, this UFO wasn't completely harmless, the report saying, "both cabin crew members were in the process of securing the cabin for arrival and were not seated. They received minor injuries as they were thrown into the cabin structure." 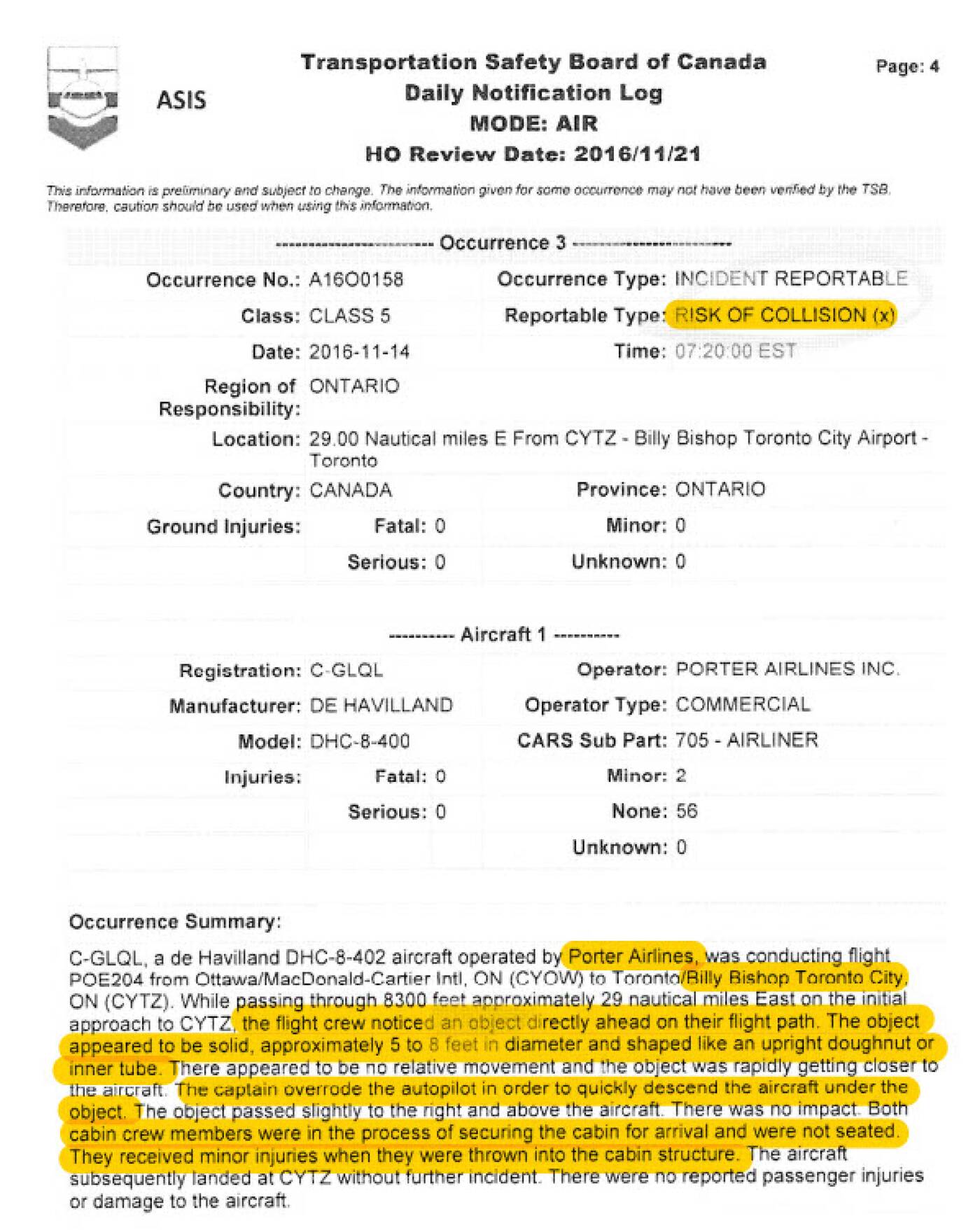 Canada's TSB commented on this issue to the CBC back in 2016, saying that they could not positively identify the object after initially believing it was a drone.

Another Porter flight reportedly encountered a UFO in August 2017 after departing Billy Bishop Airport. While climbing at about 7,500 feet, Porter Flight 537 reported passing within 1000 feet of a small, shiny metallic object.

Other sightings have been declassified further outside of Toronto, like one New Year's Day 2011 report received in the Peterborough area.

This UFO was spotted above Chemong Lake near the town of Bridgenorth around 12:20 a.m., just minutes after the New Year had begun.

It was described as circular and "50 times bigger than an aircraft" with a bright orange glow, seen darting back and forth above the treeline before making a quick departure.

In 2014, a London resident called in a report of two-to-three-inch circular red lights above the vicinity of Highbury Avenue and Hamilton Road. Initially described as a single triangular object, the shape reportedly changed and more lights appeared.

In another 2014 report, a pilot approximately 5.7 nautical miles from John C. Munro Hamilton International Airport reported seeing an object pass under them, described as "jellybean-shaped, green in colour, and about three feet in diameter."

It wasn't fast-moving, but the pilot was certain that it was not a balloon, as the object was travelling against the direction of the wind.

Some cases seem more like possible drone incidents, like a 2017 report where an Airbus A-321 commercial airliner noticed a red and white object pass above them at around 5,000 feet after taking off from Pearson Airport.

Both believers and skeptics will likely have their own explanations for all of these events, but don't expect the military to be offering answers any time soon.

The Canadian Armed Forces and the Royal Canadian Air Force stated in an interview with VICE that neither branch of the Canadian Forces is in the business of investigating "sightings of unknown or unexplained phenomena outside the context of investigating credible threats, potential threats, or potential distress in the case of search and rescue."