Elon Musk is weighing into Canada's protests in Ottawa again and this time he compared Prime Minister Justin Trudeau to Hitler in a now deleted tweet.

Musk, who has Canadian, South African and U.S. citizenship, made headlines when he showed support for the Trucker's Convoy a few weeks ago.

It seems that Musk is now taking a page out of Premier Doug Ford's daughter, Krista Haynes-Ford's handbook. Haynes-Ford recently compared mandates and measures to the Holocaust.

Musk tweeted out a meme, now deleted, in response to news that Canadian authorities have ordered financial institutions not to interact crypto addresses tied to the country's ongoing trucker protests, with a black and white image of Hitler.

"Stop comparing me to Justin Trudeau," it reads. "I had a budget." 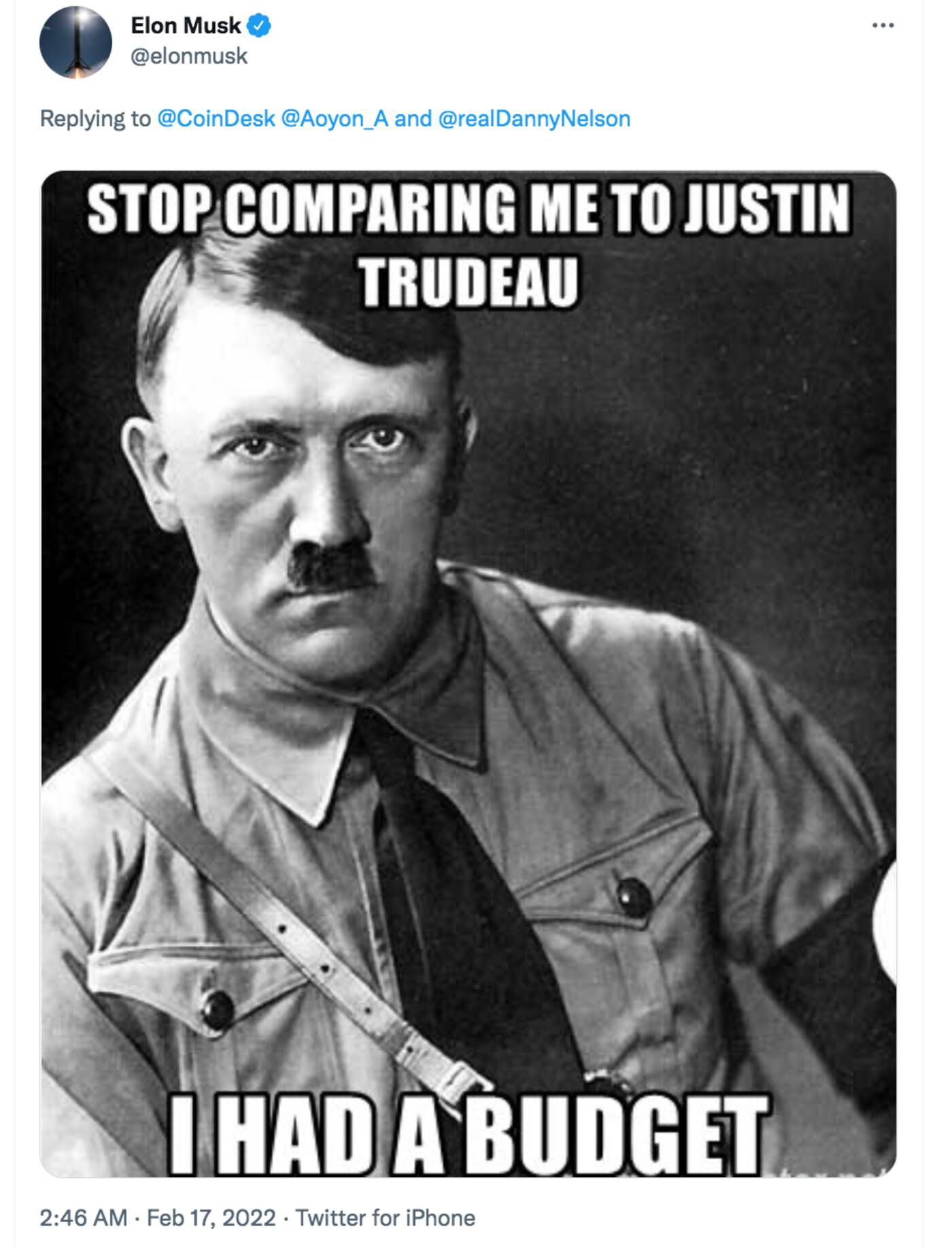 The reaction to the tweet is mixed. Those who have concerns about Trudeau's measures seem to agree.

"The Emergencies Act is a serious step that previous Canadian governments did not take," one person tweeted. "This is a slippery slope and not how the government should operate in a free and democratic society. I will be voting against the Prime Minister’s decision to invoke the Emergencies Act."

But many people, including those impacted by the horrors of Nazi Germany, have a different opinion.

BREAKING: The world’s richest man Elon Musk ignites outrage in the Jewish community by posting an Adolf Hitler meme with the caption “Stop comparing me to Justin Trudeau. I had a budget.” RT IF YOU THINK TWITTER SHOULD SUSPEND HIS ACCOUNT!

"Using the image of Adolf Hitler & therefore exploiting the tragedy of all people who suffered, were humiliated, tortured & murdered by the totalitarian regime of Nazi Germany created by him is sad & disturbing," the Auschwitz Memorial tweeted. "It disrespects the memory of all victims & hurts many people."

This is extremely poor taste, not a good look at all, there is better way to make an argument,

Others suggest they are done buying Musk's products.

I try to look past this stuff. But damn man. You make it hard to be a Tesla fan.

Musk is aligning himself with people who have threatened to kill Trudeau and incite violence, others suggest.

Nice heroes you got there.

Looking forward to the accounting scandal.https://t.co/iFPpeYiA7S

While many of the protesters were peaceful, there is growing evidence that an extremist right-wing element has infiltrated the movement. The protest has morphed into an encampment (though not like the ones in Toronto or police would have torn it down by now), with dancing, at least one hot tub and a daycare.

It's brought residents to the boiling point.

People might not agree on if the Emergencies Act was necessary but many residents in Canada have had enough and don't need billionaires weighing in on politics, much less making disrespectful comments.